by Daniel J. Flynn
Anthony Fauci and Joe Biden at the White House on May 17, 2021 (White House/Wikimedia Commons) 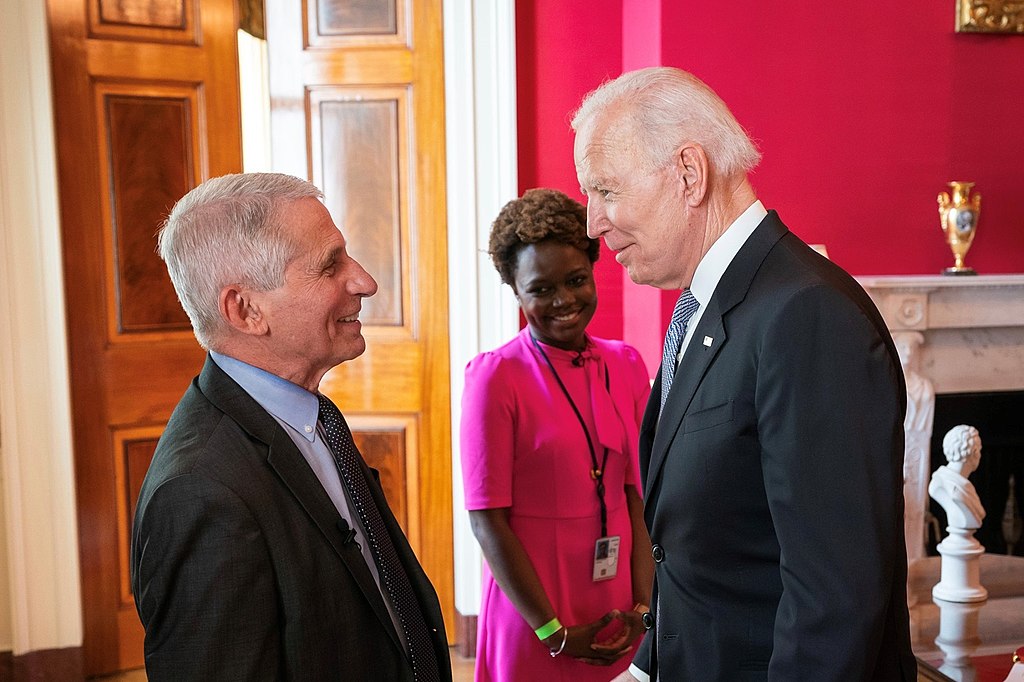 Instead of acknowledging the more than quarter-million deaths on his watch of Americans infected by Covid-19, Joe Biden blamed “a distinct minority of Americans supported by a distinct minority of elected officials” for the current troubles. Biden announced the Department of Labor issuing a “new emergency rule” (strange how bureaucratic rules rather than laws passed by elected legislators now govern us) pressuring private employers to fire workers who do not receive a vaccination shot or submit to tests. He issued an executive order forcing federal employees and contractors of his branch of government to become vaccinated. He used the bully pulpit to push stadiums, theaters, and other venues to hassle their customers via requirements for a vaccine or testing. (How long must one wait in line to watch a football game?) He revealed larger fines for travelers not masking up. “This is not about freedom or personal choice,” the president explained. He got that, if nothing else, right.

Coronavirus is healthier than fascism.

Joe Biden’s plummeting popularity catalyzed the action. And Democrats, who believe in the false god of government, abandoning the ineffective leader who shakes their faith account for the better part of that drop in the approval rating, which, according to a poll by the Economist/YouGov, now stands below the Political Mendoza Line at 39 percent.

A few of the people dim enough to believe that this dullard represented science and his predecessor stood for backwardness now see that the emperor has no brain. Unfortunately for Biden, talking his way out of this perception only reinforced it.

Biden and the Benighted Enlightened reflexively look to government to solve the plague that plagues us. This default superhero role seems ironic given the federal government’s role in helping to bankroll the very archvillain mad scientists who likely got us into this mess.

When an arsonist rides the firetruck to the rescue, do we shout hip-hip hooray?

A left-wing website, which several months ago mocked Senator Rand Paul for stating that Fauci’s National Institute of Allergy and Infectious Diseases (NIAID) funded gain-of-function research, this week published an exposé affirming that Fauci sent our tax-dollars to the Wuhan Institute of Virology to perform risky experiments of the type suspected of unleashing Covid-19.

“The bat coronavirus grant provided the EcoHealth Alliance with a total of $3.1 million, including $599,000 that the Wuhan Institute of Virology used in part to identify and alter bat coronaviruses likely to infect humans,” the Intercept reports. “Even before the pandemic, many scientists were concerned about the potential dangers associated with such experiments. The grant proposal acknowledges some of those dangers: ‘Fieldwork involves the highest risk of exposure to SARS or other CoVs, while working in caves with high bat density overhead and the potential for fecal dust to be inhaled.’”

The grant went through a pass-through organization. But the attempt to launder one’s ethics through middlemen just makes it worse because it offers a tacit acknowledgment in the giver of wrongdoing by recruiting another party for the sole purpose of providing a future excuse. The specific experiments receiving federal funds did not unleash coronavirus. But fixating on that seems to miss the point: Fauci’s outfit used our tax-dollars to subsidize crackpot science damaging to mankind.

Is it any wonder why he so quickly rejected the notion that this plague originated in a lab?

The slow media epiphany that previously transformed Andrew Cuomo from hero to zero now threatens the only American more popular than Cuomo during the height of the pandemic. When one lies so boldly — visibly shaking, borrowing hand gestures from The Jerry Springer Show, accusing his accuser of lying — as Anthony Fauci apparently did during his July confrontation with Senator Rand Paul, it tends to make naifs of the people imagining themselves as sophisticates. Now that it appears that Fauci made unwitting deceivers out of so many in the media, a few journalists at least act like they do not appreciate it.

“Research in this manuscript was supported by grants from the National Institute of Allergy & Infectious Disease,” wrote the Wuhan authors of a Nature Medicine article. They write in that article that they “built a chimeric virus encoding a novel, zoonotic CoV spike protein — from the RsSHC014-CoV sequence that was isolated from Chinese horseshoe bats — in the context of the SARS-CoV mouse-adapted backbone. The hybrid virus allowed us to evaluate the ability of the novel spike protein to cause disease independently of other necessary adaptive mutations in its natural backbone.” That Frankenstein stuff is gain-of-function research, and the scientists that did it thanked Fauci’s NIAID for giving them the money to do it.

Fauci’s lies, like another virus, mutate. He opposed masks before he demanded them. “We were told in our task force meetings that we have a serious problem with the lack of PPEs and masks for the health providers who are putting themselves in harm’s way every day to take care of sick people,” he reasoned for his flip-flop. He was initially against Trump’s travel ban before he was, the next month, for it. Maybe he soon says he really said something else to Rand Paul.

Fauci combines the most appalling aspects of medical arrogance with characteristic bureaucratic self-preservation. The man exudes a Joe Isuzu, Baron Munchausen, Frank Abagnale, Professor Harold Hill quality, albeit one cleverly masked behind all those masks. Just as the commander-in-chief reiterated his call to mask up, the scientist-in-chief’s mask slowly came off. He wears two or three, so perhaps it takes time for all to see the man behind the mask.

Fauci’s dishonest tendencies embarrassed him this week. And his simpleton boss’s incompetence upended him.

Like coronavirus, they unfortunately afflict us for some time further. The danger of this Washington plague stems from oft-erring officials never considering, even when issuing one-size-fits-all edicts upon tens of millions of people, this question: What if I am wrong?