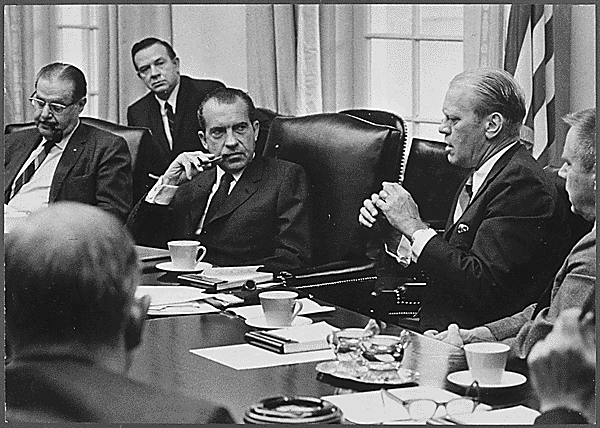 Geoff Shepard, former deputy White House counsel for Nixon, has written three fabulous books that should forever change Americans’ views about Watergate — The Secret Plot to Make Ted Kennedy President (2008), The Real Watergate Scandal (2015), and The Nixon Conspiracy (2021). Shepard’s website includes links to these books, a podcast he did with Hugh Hewitt at the Nixon Library in January 2020, and his lectures on Watergate at Temple University in 2019.

Shepard has also written a series of important articles on Watergate for The American Spectator. Shepard’s work has solidly built on the foundations laid by James Hougan’s Secret Agenda (1984) and Len Colodny’s and Robert Gettlin’s Silent Coup: The Removal of a President (1991). Shepard’s work shatters the conventional Woodward–Bernstein “history” of Watergate peddled by the mainstream media and other Nixon haters. But long before Shepard’s work appeared, the great British historian Paul Johnson exposed the myths of Watergate in his 1997 book A History of the American People.

Indeed, Johnson started to undermine the conventional view of Watergate in his 1983 book Modern Times, where he described Nixon’s resignation as a “media putsch” engineered by Nixon’s media foes and ideological opponents who never forgave him for outing Alger Hiss as a Soviet spy in the late 1940s. Johnson in A History of the American People provided more detail and greater perspective on the real Watergate story.

Johnson described the Watergate “hysteria” in which “all reason, balance, and consideration of the national interest was abandoned” by a Democratic Party and media that wanted Nixon’s scalp.

Johnson begins with examining the intense media hostility toward Nixon as liberals sought to shift the blame for the Vietnam debacle from Kennedy and Johnson to Nixon. Nixon’s presidency coincided with the far Left’s takeover of the Democratic Party, manifested in the candidacy of George McGovern, who, Johnson wrote, shared the views of the Eastern Establishment media and the youth counterculture. After Nixon’s landslide victory in 1972, Johnson notes, one powerful news editor proclaimed, “There’s got to be a bloodletting. We’ve got to make sure that nobody ever thinks of doing anything like this again.” “The aim,” Johnson wrote, “was to use the power of the press and TV to reverse the electoral verdict of 1972, which was felt to be, in some metaphorical sense, illegitimate.” Some in the media started referring to the “Nixon regime,” as if Nixon’s 49-state electoral victory was somehow anti-democratic.

And unlike during the many scandals of the Kennedy administration — Attorney General Bobby Kennedy ordered federal agents to raid homes of steel executives who opposed the president’s policies, authorized the bugging of Martin Luther King’s sexual escapades, and covered up the president’s sharing of a girlfriend with a notorious mobster, while the Kennedys used the IRS to harass political enemies and became involved in assassination attempts on foreign leaders — the media during Nixon’s presidency conducted what Johnson called an “anti-Nixon campaign” that was “continual, venomous, unscrupulous, inventive, and sometimes unlawful.”

Johnson notes that the Washington Post featured Watergate stories on its front page 79 times during the 1972 election. But Nixon’s “silent majority” still reelected him by a landslide. So the media, their Democrat allies in Congress, a partisan special prosecutor team, and a “publicity-hungry” federal judge transformed a rather tame case of political espionage into the greatest scandal in our nation’s history. Thus began what Johnson called the Watergate “witch hunt” led by Democrat Sen. Sam Ervin, a longtime defender of Jim Crow laws and segregation who, according to Johnson, “successfully covered up LBJ’s crimes in the Bobby Baker affair,” and a team of “200 lawyers and special assistants working for Nixon’s downfall and feeding all the damaging material they could muster to an eager anti-Nixon media.” And we now know that Woodward and Bernstein were being fed “information” and “leads” by the then-deputy director of the FBI, who was angry at Nixon because Nixon didn’t appoint him as FBI director to succeed J. Edgar Hoover.

Johnson described what happened next as Watergate “hysteria,” in which “all reason, balance, and consideration of the national interest was abandoned” by a Democrat Party and media that wanted Nixon’s scalp. Nixon, Johnson wrote, was denied due process — something that Shepard’s work confirms. The impeachment process was used as a political weapon in what Johnson called “a dark hour in the history of a republic which prides itself in its love of order and its patient submission to the rule of law.” Johnson notes that Nixon’s instinct was to fight against this terrible miscarriage of justice, but he “decided it would be in the national interest to resign” — a decision Johnson called “mistaken.” (READ MORE: Warnings From Watergate for the January 6 Committee)

In the end, Johnson wrote, the Democrats “destroyed a strong and able president” who had ended the divisive Vietnam War that he inherited from Kennedy and LBJ, brilliantly exploited the Sino-Soviet split to America’s geopolitical benefit, and reduced Soviet influence in the Middle East. After the brief interval of the Ford presidency, Democrat Jimmy Carter was elected largely because of the Watergate hysteria — and soon America’s standing in the world reached its nadir.

Today, the media is full of stories about the Watergate break-in that occurred 50 years ago — stories parroting the Woodward–Bernstein version that demonizes Nixon and praises the work of congressional Democrats, special prosecutors, and especially the media for allegedly saving the republic. Paul Johnson knew that version was nonsense as early as 1983. Jim Hougan and Colodny and Gettlin then began to pierce the veil of conventional histories, and now Geoff Shepard has provided more details and facts about Watergate showing that, like Paul Johnson wrote many years ago, Watergate was a political coup d’état that unseated a popular and successful president.