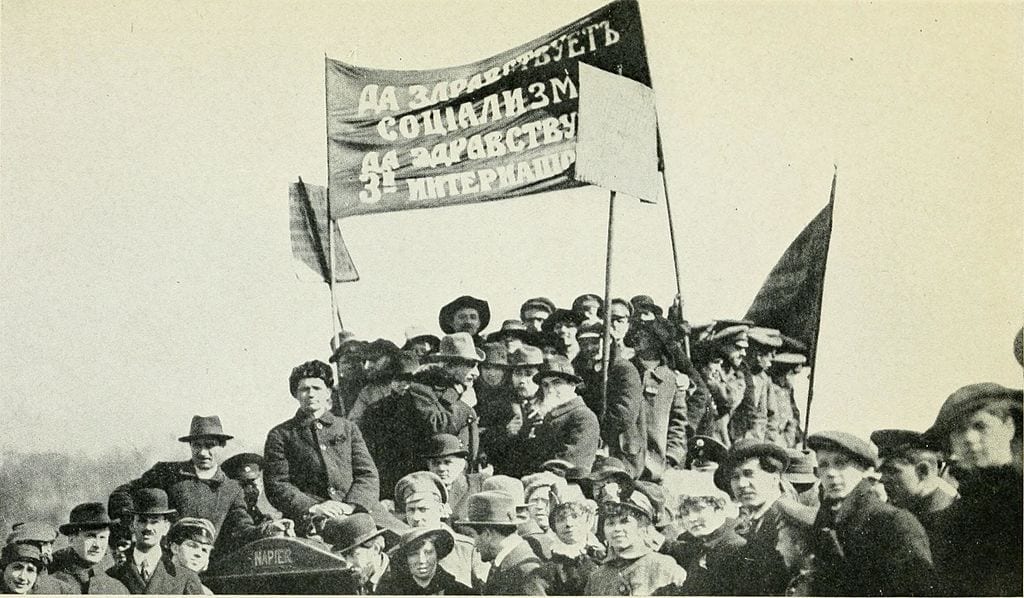 Mindful of Voltaire’s dictum (“To hold a pen is to be at war”), we take up the pen against five enduring myths about the Russian Revolution and the advent of socialism. The five myths are long-standing pillars of falsehood — used to curtail liberty, justify past atrocities, and (in the name of “progress”) lead free people into servitude.

Calling themselves “progressives,” many people today readily accept most or all of these myths as the truth. Filled with socialist yearnings, they have become a new force to be reckoned with in American politics.

Myth #1 — The false story of a heroic beginning to socialism — as a popular uprising by an oppressed people against social injustice and the cruelties under the Tsar.

In truth, the Russian revolution did not really begin until after the military coup that brought the Bolsheviks to power on Nov. 7, 1917. The coup was an almost bloodless event — “as easy as picking up a feather,” Lenin admitted. The Bolsheviks were just one of several parties contending for power in Russia following the abdication of Nicholas II, the last Tsar, early in the year. Credit Lenin with some real foresight: He was quick to realize the advantage that might come from putting together a private army from soldiers and sailors set adrift by the collapse of the old regime. It was a small group of disaffected soldiers — not alienated workers — who stormed the Winter Palace in Petersburg, arrested members of a feeble Provisional Government, and catapulted Lenin — who enjoyed no widespread popular support — into power. The historian Bertram Wolfe quipped:

What came next was the real revolution: the elimination of private property, the abolition of all existing laws, the end of individual rights, the rapid descent of civil society into chaos, and the concentration of all authority and decision-making power in the hands of the state. In the novel Doctor Zhivago, Boris Pasternak provided an unforgettable description of the process:

Everywhere there were new elections: for the running of housing, trade, industry, and municipal services. Commissars were being appointed to each, men in black leather jerkins, with unlimited powers and iron will, armed with the means of intimidation and revolvers, who shaved little and slept less. They knew the shrinking bourgeois breed, the average holder of cheap government stocks, and spoke to them without the slightest pity and with Mephistophelean smiles, as to petty thieves caught in the act. These were the people who reorganized everything according to plan, and company after company, enterprise after enterprise, became Bolshevised.

Myth #2 — The claim that communism would bury capitalism — winning out as a result of being the superior system both economically and socially.

Here was the supposed bargain under Marxist / Leninist theory. The workers would throw off their chains — freed from exploitation under greedy capitalist bosses, and the state would take care of everyone’s needs — treating everyone equally. Through miracles of central planning and social engineering, “scientific socialism” would outdo capitalism in the production and provision of everything needed — from housing and healthcare to food, transportation, education, sport, and entertainment.

It didn’t work. Right from the start, it did not work.

Under socialist dogma, all profit was theft. Faced with severe bread shortages in Russian cities, Lenin ordered peasants to turn over their harvest to the state — at prices so low they couldn’t cover their production costs. In response, the peasants planted less and sold as much of their product as they could on the black market. Many traveled to nearby cities and towns and sold food from sacks on their backs. Under Lenin’s orders, such “bagmen” were to be shot on sight. But the black market still grew. To buyer and seller alike, hunger had become a more pressing concern — and starvation a greater threat — than the policeman’s bullet.

So, Lenin relented — endorsing a New Economic Plan that, at least temporarily, allowed peasants to sell produce on the market. He complained that “he felt as if he were trying to steer a bicycle whose wheels were not connected to the handlebar.” He must not have known how right he was.

Yes, we say — trying to steer an economy without the benefit of the profit motive and free-market pricing is very much like trying to steer a bicycle whose wheels are not connected to the handlebar. That’s because there is nothing to connect supply and demand, nor anything to motivate anyone to work hard and be creative.

If no one gets to choose, how can anyone — let alone everyone — be happy with the choices that have been made for them by a distant if also menacing state? Think of how different that is from the voluntary exchange in a free society — where people compete with one another to satisfy the needs of others.

Myth #3 — The lame excuse that, in the sometime messy business of trying to create a more perfect society, you “have to break eggs to make an omelet.”

In this case, the “eggs” were individual human beings, the millions upon millions of people sent to early graves by communist tyrants; the “omelet” was the creation not of a Heaven on Earth, but of a true Hell on Earth. Among other tragedies, this was a world where children learned in school to spy on their parents… and where everyone was encouraged to spy on everyone else — in the hope of winning small favors from the state, such as the keys to a better apartment, made available through the betrayal of a neighbor.

Quoting Robespierre from the French Revolution, Lenin liked to say that terror was virtue, and that virtue — in the older sense of the word — was vice. That was the ruling ethos not just in Lenin and Stalin’s Russia, but also in Mao’s China, Mengistu’s Ethiopia, Castro’s Cuba and Pol Pot’s Cambodia.

It was never anything but fake science — beginning with the false prophecies of Karl Marx. As the unfolding of events in the Industrial Revolution would demonstrate, capitalism led not to massive impoverishment, as Marx had predicted, but to extraordinary progress in raising living standards for most people. Thanks to the deployment of capital (mainly retained profit) in the development of better tools and machines and the creation of new products, ordinary workers became increasingly productive and increasingly able to enjoy amenities that were not available to even the most prosperous people in earlier generations.

On the other hand, experiments in social engineering, as practiced by Stalin in the forced collectivization of Soviet agriculture in the early 1930s and by Mao in the Great Leap Forward in the late 1950s, succeeded only in deepening the subjugation and misery of hundreds of millions of people already living in desperate poverty. They produced man-made famines and starvation on a massive scale. Mao’s Cultural Revolution in the 1960s and ’70s was another great experiment that produced more insanity and more misery — including the “Up to the Mountains and Down to the Countryside Movement,” which sent some 16 million urban youth into the countryside to make new lives for themselves as farmers or vagabonds in distant provinces. Said Mao by way of explanation: “The intellectual youth must go to the country, and they will be educated in rural poverty.”

Myth #5 — The repeated assertion of socialist compassion for the poor and downtrodden, contrasted with capitalist greed and exploitation; and the closely related misconception that great wealth can only arise from terrible exploitation.

Where has “compassionate” socialism done any good for people in alleviating poverty? Did it work in India, for instance, which followed a meddlesome, as opposed to murderous, model of socialism from the late 1940s through the 1980s?

No, it did not work in India. Nor did it work in Egypt, Indonesia, or in other African and Asian nations attracted to socialism following the end of World War II, the collapse of old colonial empires, and the formation of new countries and governments.

Though it did not eliminate private property, India under Nehru and his immediate successors pushed all the right socialist buttons — keyed to heavy investments in infrastructure, nationalized companies, and rapid industrialization. With big dams, steel-mills, and the like, the state erected “Temples of a New Age,” and India became no richer because of them.

That began to change in a big way only after India abandoned socialism in the 1990s through a series of reforms allowing private enterprise to flourish — and flourish it has, as anyone who visits there today becomes instantly aware. Over the last two decades, India’s growth rate has outpaced that of every developing country with the single exception of China.

And present-day China provides still more clinching evidence of the wisdom of unwinding socialism and unleashing the power of free enterprise. Coming to power in 1978, two years after Mao’s death, Deng Xiaoping opened China to foreign investment and global markets. But his biggest move came in 1984 with the liberation of the Chinese agriculture — in freeing peasants to sell in the open market.

That marked a huge departure from the model of state ownership and control in the production and distribution in the area of food. Going to a free market has had the happy result of ending the plague of famines that had existed throughout modern Chinese history.

Coming from the mouth of a long-time socialist, Deng also uttered the greatest of heresies — no longer denouncing profit as theft, saying “To get rich is glorious.” He and other Chinese leaders since then have systematically freed ownership of the means of production in many other areas.

One upshot of that: China has been producing new billionaires at a faster rate than any country in the world and — according to Forbes— will soon have more billionaires than the United States. But the still more important upshot is this: In both India and China, rapid business formation has driven rapid economic growth… and accounted for the greatest anti-poverty program in recent times — lifting hundreds of millions of people out of poverty over the last couple of decades.

No one would claim that China suddenly ranks among the freest or richest countries in the world. It remains a one-party state (the communist party), and poverty is widespread. But it has made important strides — thanks to expanded individual and economic freedom.

Every form of socialism — from the mild to the murderous — depends upon government coercion and the curtailment of liberty — in the forcible redistribution of wealth and in calls for an ever-lengthening list of “free” public services.

It is more than a little disturbing that so many Americans have jumped on the progressive bandwagon.

The real poverty trap is socialism. Free enterprise — the combination of freedom and enterprise — is what has made America great, and it has also been the key to spreading greater opportunity and prosperity in other parts of the world.

Crosby Kemper III is chairman of the Show-Me Institute and Rex Sinquefield is the president of the Institute. Andrew B. Wilson, the Institute’s senior writer and a long-time contributor to The American Spectator, was a co-writer of this essay, which appears in the Institute’s just-released 2017 annual report — examining the 100-year history of socialism as a “Failed Idea That Refuses to Die.”