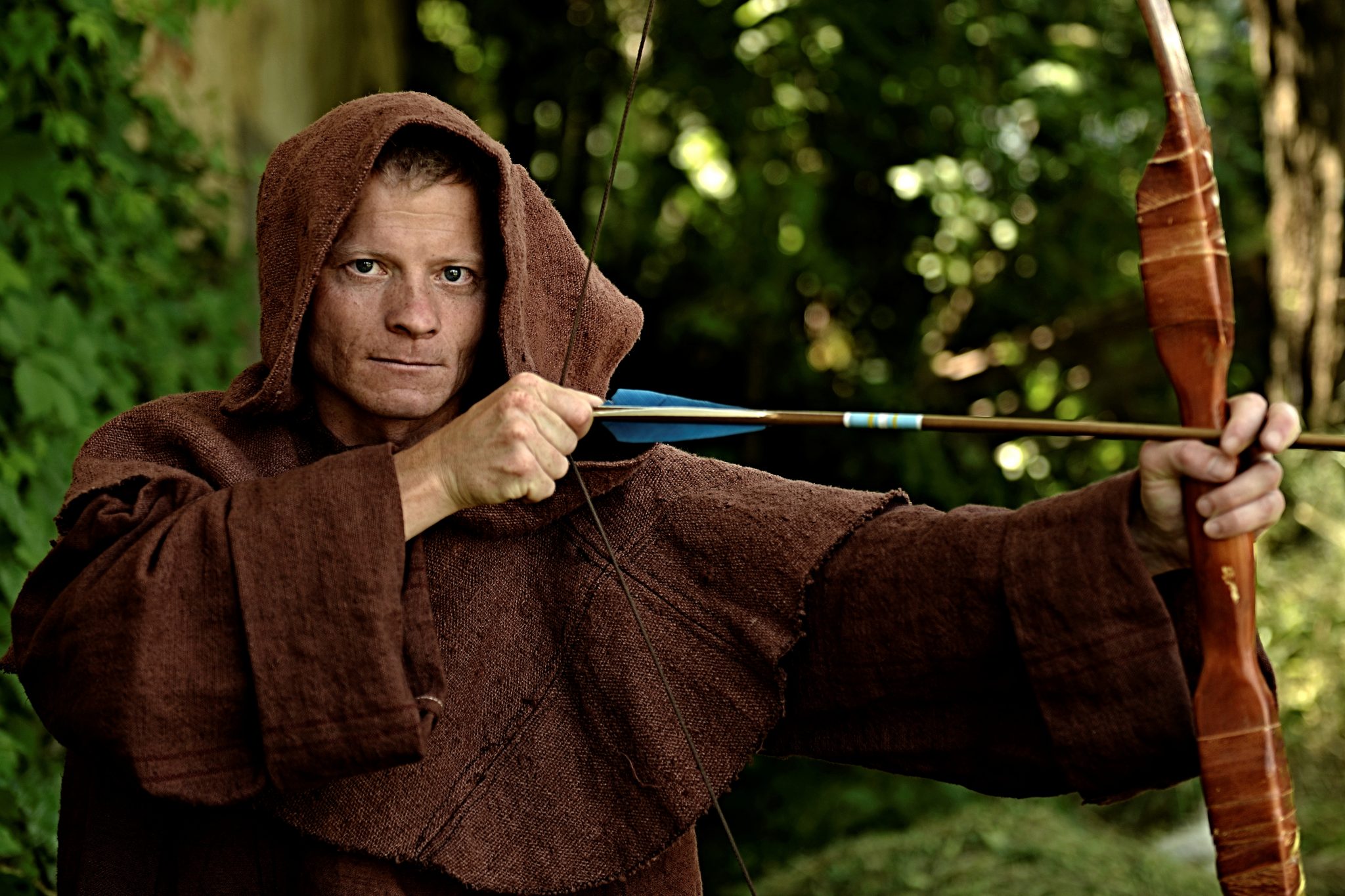 There I was, at age 33, reading Atlas Shrugged. I was just being introduced to Ayn Rand, had just finished We the Living. As I am reading, a character describes Robin Hood as the pure embodiment of evil. That attack on Robin Hood irked me. Though fictional, he actually was a very good guy. He robbed from the rich, and he gave to the poor. He was a wonderful guy. It bothered me that Rand had deviated from her philosophy to attack one of my boyhood heroes. Stick with Dagny and Hank and John Galt, and leave Robin Hood alone. He’s a good guy.

It took me a few days, and then it hit me: I had been brainwashed by my schoolteachers in elementary school, my school textbooks, the movies. What in the world is righteous about stealing assets from people who have come to them legally? What makes the assets of the rich less rightly theirs than the assets of anyone else? By what right does anyone assign to himself the right to steal from someone to give his assets to someone else?

And how on G-d’s earth had I missed that point for three decades? Nowhere does the Torah allow stealing from someone else, neither from the rich nor the poor. What got into my head that Robin Hood was OK, much less a hero?

It was a different time. Sure, the liberals were trying to brainwash us kids, empowered by the media. We were told that Barry Goldwater was intent on bringing the world to nuclear holocaust. That Ronald Reagan wanted to close public libraries and to starve out schoolchildren by relegating them to lunches comprised only of ketchup. It was that way, even then. But it was nothing like today.

When we leave education and entertainment in the hands of the Left, as we have, we do not realize what we are doing, what we have done to destroy ourselves. Nothing is more precious than educating our children: “And you shall teach it diligently to your children And speak to them of it” (Deuteronomy 6:7). We handed our country’s most precious resource, our future generations or two or three, to the Left. When we try now to educate the past two college-“educated” generations to the dangers and outright evils of socialism, we fail to realize that we mostly have missed the boat. They mostly are lost. We handed the reins over to leftists to educate them. We allowed them to take a generation or two of Ocasios and inculcate lies into their heads as truth. Now they merely spout what they were taught, what our tax dollars paid their brainwashers and lent them.

What do we have now to win them back? The government has nothing to offer. The best I have seen are the five-minute videos from Prager University. Is that going to win back the millions we have lost? It is a tough sell.

I was brainwashed into taking it for granted that it is righteous to steal from the rich to give to the poor. Even as I had become conservative, I still inherently regarded Robin Hood as a good guy. I still was startled by Ayn Rand’s merciless description of him. It took me days to get the point. Thank G-d that John Galt’s radio speech ran one or two million pages and took three months to read, so I had time to think it through while dutifully enduring that soliloquy. (And — if you never have heard of the guy and now are asking, “Who is John Galt?” — well, right.)

The Left has won the universities for this round, the half-century ahead. Four years of Trump and DeVos barely have scratched that surface. If anything, Cancel Culture has gotten even 10 times worse. If the snowflakes previously were relegated to whining over microaggressions and demanding trigger warnings and safe spaces where they could heal with Play-Doh, cocoa, and comfort pets, now they are armed with axes to end careers. A great business law professor, Gordon Klein, got suspended for a term for tweeting some common sense. Another great business professor said a word in Mandarin that sounded like a word rhyming with “bigger,” a word that Black rappers use dozens of times in their rap “songs,” and the guy got kicked off the faculty. I personally can tell my own personal stories of Cancel Culture. Leftists can spout garbage all day in the classroom instead of teaching the subjects they are assigned and paid to teach, and they can get away with it. But a contemporary professor dare not say a word in support of Donald Trump or condemn Kamala Harris for sleeping her way into California Democrat politics with a married man 31 years her senior, or he can get canceled.

I have tallied all that I used to donate to those three places, and I now donate that elsewhere — to causes and institutions in which I believe, whose values mirror my own. I donate to Simchat Shabbat, a local charity that supplies and anonymously delivers food boxes every Sabbath eve to people who cannot afford meals for the Sabbath, and to patients whose medical situations have compelled them to spend their Sabbath in a local hospital. I donate lovingly to cancer research. But not one penny to Columbia University. Their anti-Semitic undergraduate student body just voted to boycott Israel. To hell with them. While that bunch of mucus-nosed Jew-haters pass their meaningless resolutions to boycott Israel, that country now will have to make do financially with what business it can generate with Bahrain and the United Arab Emirates, hopefully to offset the losses she will sustain by not being able to market Columbia University flannel pants.

For all this I blame the Republican Party. I blame Eisenhower and Nixon and Dole and McCain and Romney and anything Bush. And all the fools in New Hampshire and Iowa who voted for them in Republican primaries, effectively using their early-round advantages to knock out the conservative candidates we needed. The Democrats did what they openly set out to do: destroy our culture and values. I give them credit for their honesty. But the Republicans were supposed to be the conservatives. They were supposed to care for our values. That is why we elected so many of their impostors to the presidency. They were supposed to name conservative judges to balance the Democrat nominees appointed by Johnson, Carter, Clinton, and Obama. They were not sent there to give us Blackman, Stevens, Souter — or even Kennedy, O’Connor, and Roberts. We didn’t vote for that.

They focused so much on their “free trade” and on privatizing social security that they overlooked, oh, the colleges and universities. And Trump missed that one, too.

The universities indoctrinate politically and should be denied their tax-deductible status. They should be required to lend money themselves without government involvement in student loans. They have endowments, and they should be required to lend from them, not from our taxes. If they teach well and productively, the loans will be repaid with interest by productive and successful alumni borrowers. By contrast, if they send out a generation of ignorant students, who know critical race theory but cannot multiply two digits by two digits, cannot identify whom we fought in the Revolutionary War, and who don’t know the difference between a pronoun and a preposition, then the loans will default as they should. Such loans should be dischargeable in bankruptcy, and the universities should bear the costs.

The universities are rich. Let Robin Hood steal from them and from millionaires like Obama and Elizabeth Warren and Bernie Sanders and give back to the poorest of the poor — America’s taxpayers who now are more than $27 trillion in debt.