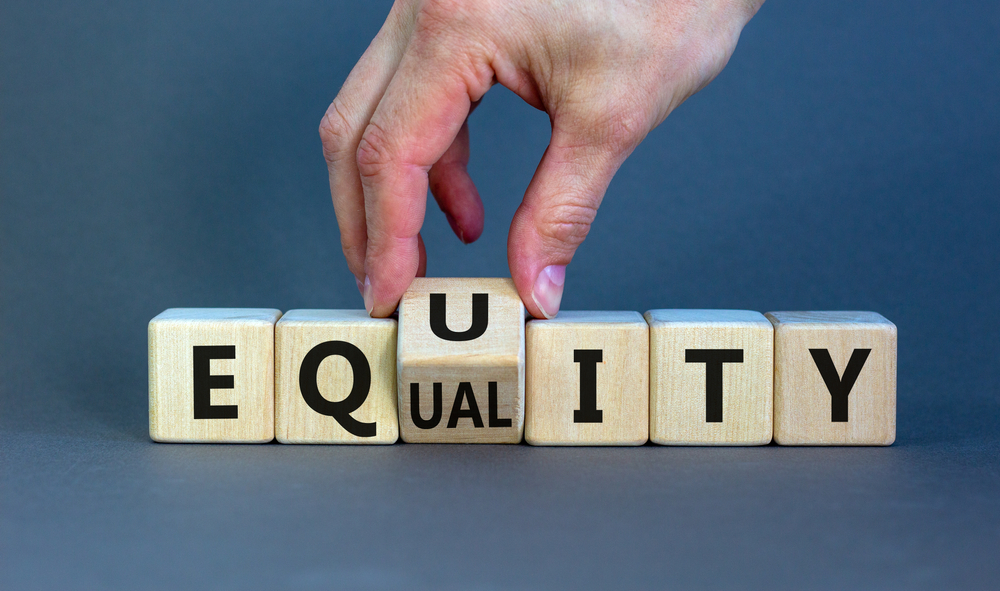 K-12 public education nationwide is fixated on the term “equity.” It has been added to many public school mission statements and core values, but the positive-sounding term means something more — and something more destructive — than providing equal opportunity for students.

Identifying and labeling students based on their socioeconomic and ethnic or race group dominates the education conversation, with group academic performance based on these demographics the frequent focus. Any differences in academic performance between demographic groups (especially based on race) are labeled “achievement gaps,” the remedy for which is more equity. But what does equity really mean?

Under the guise of “equity,” the goal of helping all children have an opportunity for success has now become a demand for uniformity in student performance outcomes. Vice President Kamala Harris pushes this redefinition of equity, which traditionally has meant, according to Merriam-Webster, “freedom from bias or favoritism.” In a November 1, 2020, tweet, she said, “There’s a big difference between equality and equity.” According to Harris, equality is problematic because it suggests “everyone should get the same amount.” Instead, she advocates “equitable treatment,” which to her “means we all end up in the same place.” In essence, Harris advocates for a system in which disparities are eliminated by treating people not equally, but with favoritism or bias — a view that conflicts with the concept of equity as it has traditionally been defined and accepted.

There has been a subtle shift in the conversation: Its focus has moved from equality to equity. That is, instead of pursuing the Rev. Martin Luther King Jr.’s ideal of judging people by the content of their character rather than the color of their skin, equity would reward and punish people because of the color of their skin. Rather than equality of opportunity, equity would mandate equality of outcome. This goal is not only un-American — it is impossible to attain.

A growing number of people argue systemic racism is the primary or even the sole reason for varied achievement results between ethnic or race groups. In essence, they allege that the “basic American value of equality of opportunity — that the rules should apply equally to everyone, regardless of race — is racist, because equality of opportunity doesn’t always produce equality of results. The solution is ‘equity,’ or attempting to achieve equality of results through discrimination.” In turn, the claim of systemic racism is used to support policies that undo equal treatment of children.

Part of the new drive for “equity” is the lowering of student expectations. In past decades, it was taken for granted that students should be allowed to pursue reaching their full potential and that high expectations were foundational to students’ achieving that potential.

Today, however, high-achieving students are constrained by low expectations. Nationwide, schools are either removing challenging courses for high-performing students or threatening to do so unless a sharp increase of students of certain skin colors can be found who academically qualify and demonstrate an interest in participating. This includes courses designed for the gifted and talented, including Advanced Placement courses. These offerings are deemed inequitable simply due to differing participation levels by certain socioeconomic or ethnic or race groups.

Karol Markowicz writes, “The idea that because students don’t represent the right racial mix, programs need to be scrapped is noxious. What message does that send black or Hispanic kids in advanced classes? That there aren’t enough people who look like you taking these classes, so you don’t deserve curriculum appropriate for your level?”

Consider for a moment what would happen if a school were to cut the basketball program because not enough Asian or white players made the team. Or imagine a cross country or track coach restricted from offering more experienced or advanced runners tougher training workouts geared to their higher capabilities. Though perhaps well-intentioned, the move to eliminate courses designed for high performers will be detrimental to education. The opportunity to foster hard work, determination, perseverance, and mental toughness — valuable qualities for life — are lost in lowering student expectations.

Disparities Do Not Equal Discrimination

It’s not systemic racism, but instead our antiquated factory model education system, designed more than 100 years ago, that is failing students. The model is based on a false premise that students are all the same, and therefore a one-size-fits-all system will produce the desired outcome among all students.

The approach defies basic logic. Students vary widely in their interests, gifts, creativity, experiences, and home life — all of which contribute toward learning readiness. The uniqueness of each individual also affects the way he or she learns.

Common sense, supported by overwhelming empirical evidence, reveals that educational performance is the result of many factors, some of which start at birth. These include the value of education within the home, the degree of parent involvement in the child’s learning, and the amount of time spent on homework. Thus, the educational culture of the family plays a significant role in student performance.

According to Thomas Sowell, family makeup also affects the IQ of students. For example, children raised by two parents tend to have higher IQ scores than children raised by only one parent, and firstborn children have higher IQs (as well as future economic success) than their siblings. Parental time and attention to their children is of paramount importance, outweighing factors such as race and socioeconomic status.

Why then is a supposed lack of equity or claim of systemic racism within schools dominating the educational conversation? It provides an easy accusatory excuse for not dealing with the underlying realities that require personal responsibility and accountability on the part of students, parents, and educators for individual student learning results.

So What Can Be Done?

Our K-12 schools are doing a tragic disservice to students by championing a notion of equity aimed at forcing equal outcome instead of equal opportunity.

Rather than harking back to days of racism as a policy, we must continue to promote programs and policies that provide equal opportunity and better outcomes…. Rather than teach our children that they are victims of a racist system … we should teach them that they are in charge of their own dignity and their own future. Instead of treating people only as representatives of larger groups, let’s get back to treating people as individuals.

Following his advice will require high expectations for all students and an educational system in which students are provided personalized learning and advance based on demonstrated subject mastery rather than grade level seat time. The result will be students prepared for life and a viable career, regardless of their socioeconomic status or ethnicity or race. It’s no time to lower the bar. Instead, we should aim to ensure all students reach their unique potential.

While equity may be a popular term, would most Americans agree with the underlying concept represented by its altered definition? Do we want a world in which everyone is guaranteed to have the same outcome, regardless of their abilities, interests, motivation, and work ethic? What will be the outcome in terms of personal responsibility, purpose, drive, and growth if we accept the new view of equity? And what will be the impact on our country if we flip on its head the value of equal opportunity we have historically embraced, and which has made us free and prosperous? The negative implications for individuals, families, communities, and our country are unimaginable.

Dr. Keri D. Ingraham is a Fellow at the Discovery Institute and Director of the Institute’s American Center for Transforming Education.