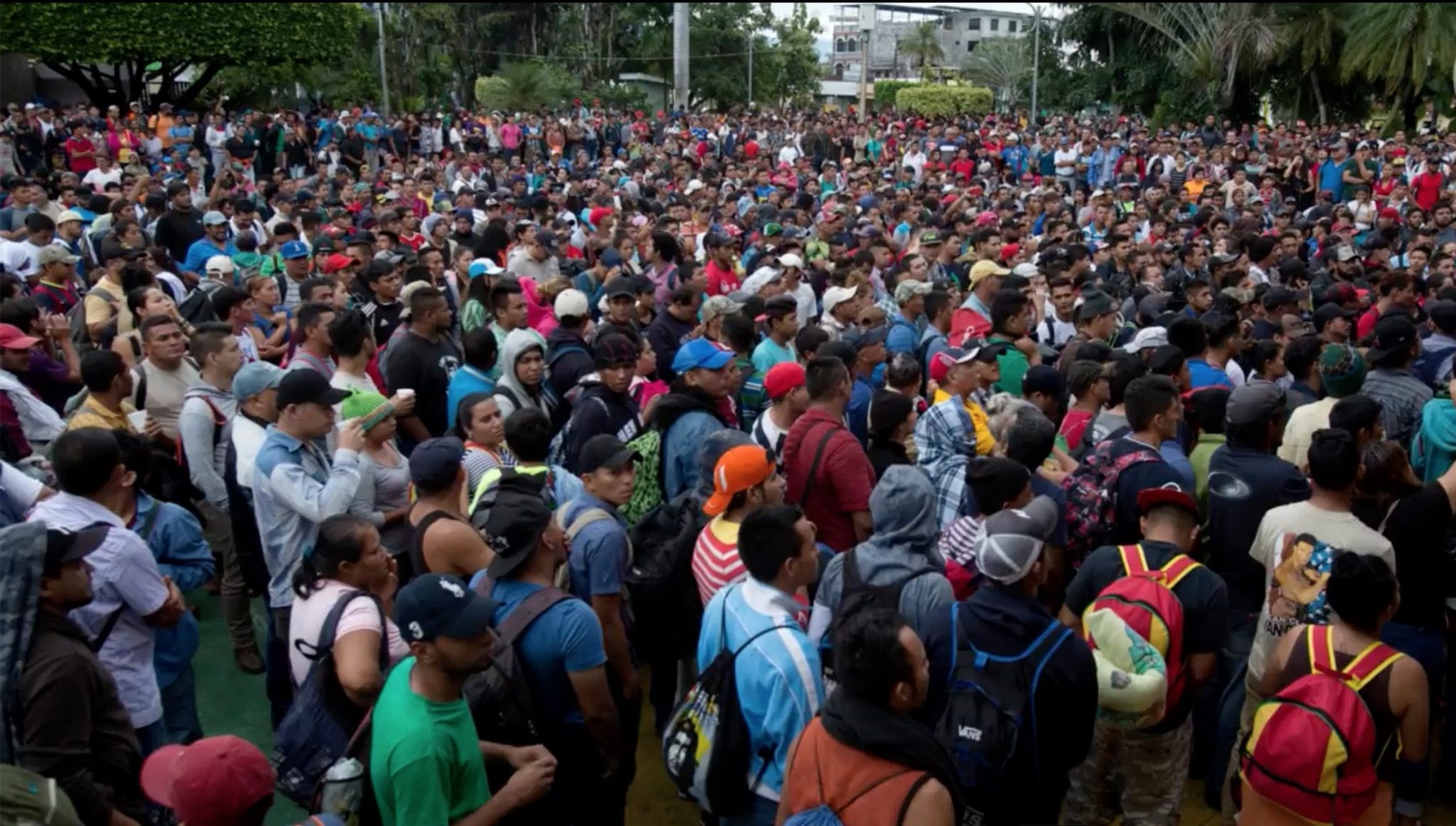 As a mob of thousands of migrants made their way north from Honduras toward the U.S. border last week, events in a closely-watched congressional race took an important turn. Politico reported that Democrats had pulled resources out of their campaign against Republican Rep. Will Hurd in the 23rd District of Texas. If their national leadership has ceded TX23 — one of the most competitive districts in the country — Democrats’ chance of a Nov. 6 “blue wave” is now in serious doubt.

The connection between the American midterm election and the northbound caravan of Honduran migrants is probably not a coincidence, although liberals in the media will scream “conspiracy theory” at any Republican who points this out. If your cynical hunch is that the latest “refugee” crisis has been manufactured by the Left as an election-year propaganda effort, however, you’re not alone. A Google search for the terms “Soros + Honduras + caravan” turned up nearly 300,000 results Friday. You don’t have to be paranoid to suspect that billionaire George Soros is paying the bills whenever you see any allegedly spontaneous “grassroots” activism on behalf of Democrats. When a left-wing activist was arrested last week for assaulting the female campaign manager for Nevada GOP gubernatorial candidate Adam Laxalt, it turned out the suspect was on the payroll of American Bridge 21st Century, an organization funded by — you guessed, didn’t you? — George Soros.

Without regard to whether the Honduran migrant caravan is another Soros-funded project, the timing would seem to indicate it was organized with the aim of impacting the midterm elections. The caravan began heading north just as Democrats were raising alarms about a lack of interest among Hispanic voters. A drumbeat of headlines conveyed the sense of panic: “Dems struggle to mobilize Latino voters for midterms” (The Hill, Oct. 11), “‘We’ve got a Latino problem’: Dems fret midterm turnout in key House districts” (Politico, Oct. 13), “Democrats have a Latino problem. Can they fix it in time?” (NBC News, Oct. 14), “Democrats need Latino voters — but fret too many will skip the midterms” (CNN, Oct. 15). The belief that Hispanic voters are, or should be, an ironclad constituency for Democrats, and that they will automatically endorse an open-borders agenda, is one of those identity-politics calculations that lead Democrats to assume they are on “the right side of history.” All that is necessary to guarantee Democrat control of the U.S. government, according to this “social justice” mentality, is to mobilize a coalition of ethnic minorities, women and homosexuals against the waning Republican power of old white men.

That formula didn’t work so well for Hillary Clinton in 2016, and Democrats’ decision to double-down on identity politics in the 2018 midterms might produce a similar debacle, as the race in TX23 illustrates. The Republican incumbent there scarcely fits the stereotype of a right-winger. Will Hurd is the only black member of the Texas GOP congressional delegation, a former CIA officer who has held the seat since 2014. The largely rural district, which stretches all the way from the suburbs of San Antonio in the east to El Paso in the west, is majority Hispanic and the congressional seat has changed hands five times between Republicans and Democrats since the 1990s. Hurd won re-election two years ago by a margin of barely 3,000 votes and was obviously a vulnerable target in this year’s midterms, but Democrats appear to have fumbled away their chance of winning in TX23 by nominating a pro-abortion Filipina lesbian as their candidate.

Gina Ortiz Jones was recruited into this campaign by Democrats at a time when feminist rage over Trump’s 2016 election was a fresh wound in the Left’s collective psyche, and it appears they didn’t bother asking whether she was a good match for the district. Jones has made a point of using her mother’s maiden name with the slogan “One of Us, Fighting For Us” in her campaign. However, she’s not Hispanic. Her mother immigrated from the Philippines and her white father (who never married her mother) was a drug addict. While she used “Ortiz” to play the identity-politics game with Texas voters, she used a similar message to solicit support nationally from Trump-haters, promising to become the “first Filipina-American and first out-lesbian to represent Texas in Congress, and she’ll be the first woman to represent her district.” She was endorsed by all the usual suspects of left-wing extremism, including pro-abortion groups like Planned Parenthood and Emily’s List, pro-homosexual groups like Equality PAC, Human Rights Campaign and the LGBT Victory Fund, and the anti-Israel JStreetPAC, as well as the Feminist Majority, People for the American Way and the AFL-CIO. She is campaigning on an agenda that includes socialized medicine, taxpayer funding for abortion, gun control, and amnesty for illegal aliens.

Well, good luck selling that to voters in rural Texas, ma’am. Anyone with a lick of common sense could see the problem with trying to run such a campaign in TX23, but Democrat voters in the five-way March primary paid no heed to common sense and, after she defeated Rick Trevino in a May runoff, Ms. Jones became a darling of her party’s liberal donor base. By the end of September, she had raised more than $4 million, but it now seems all that money has gone to waste. A September poll by the New York Times showed Hurd with a comfortable lead of 8 points, and that was before the Kavanaugh confirmation circus helped energize the Republican voter base. As polls show another well-funded hopeful, Beto O’Rourke, fading in his challenge to Republican Sen. Ted Cruz, the prospects for Democrat gains in Texas are now basically slim and none, and slim’s checking the bus schedule down at the Greyhound terminal.

Is it possible that the “blue wave” Democrats had hoped would return them to power in Washington will leave them high and dry? Every analyst now agrees that Republicans are likely not only to maintain control of the Senate, but to expand their majority, perhaps to as many as 56 seats. Rep. Marsha Blackburn looks likely to keep the Tennessee seat vacated by retiring Sen. Bob Corker for the GOP, and Nevada Sen. Dean Heller, once viewed as highly endangered by Democrat Jacky Rosen’s challenge, has edged ahead in polls since the Kavanaugh hearings. Meanwhile, Democrat Sen. Heidi Heitcamp appears doomed to defeat by GOP challenger Jon Cramer, and four other incumbent Senate Democrats (Jon Tester in Montana, Claire McCaskill in Missouri, Joe Donnelly in Indiana and Bill Nelson in Florida) are in toss-up races that could go either way. Friday night, President Trump held a massive rally in Arizona, where Martha McSally is fighting to keep the seat opened by the retirement of Sen. Jeff Flake in Republican hands.

Even as Republicans seem ready to gain Senate seats, however, analysts still say it’s likely Democrats will win a majority of House seats, returning the Speaker’s gavel to Nancy Pelosi. As of Friday evening, the Real Clear Politics House map showed 205 seats counted as either solidly, likely or leaning to Democrats, 198 for Republicans, and 32 rated as toss-ups. Yet this is a slight improvement over the RCP rankings a month earlier, when only 189 seats were in the GOP column. Both parties are performing a sort of triage process on the key House races, pulling resources out of districts that appear lost and moving them to better prospects. Just as Democrats more or less gave up on TX23 last week, they similarly retreated from other House races in Minnesota, Iowa, Florida, and Nebraska.

One analyst quoted by Politico, David Wasserman of the Cook Political Report, estimated there’s still a 30 percent chance Republicans might hold on to their House majority, although by the narrowest of margins. Of course, 30 percent is far better than chances the analysts predicted of a Trump victory two years ago, and the president has been campaigning relentlessly across the country in recent weeks.

At his Arizona rally Friday, supporters waved signs poking fun at Democrat Kyrsten Sinema’s characterization of their state as “crazy,” and Trump called Sinema a “dangerous candidate” and a “far-left extremist.” He referenced the Honduras caravan and said, “As you know, I’m willing to send the military to protect our southern border if necessary.” He also used a slogan coined as a hashtag by online activists to contrast the GOP’s best issue — the roaring economy under Trump — with the radical protest tactics of the Left: “Democrats produce mobs, Republicans produce jobs.” With the crucial midterm election now barely two weeks away, we’ll soon see which agenda American voters prefer.