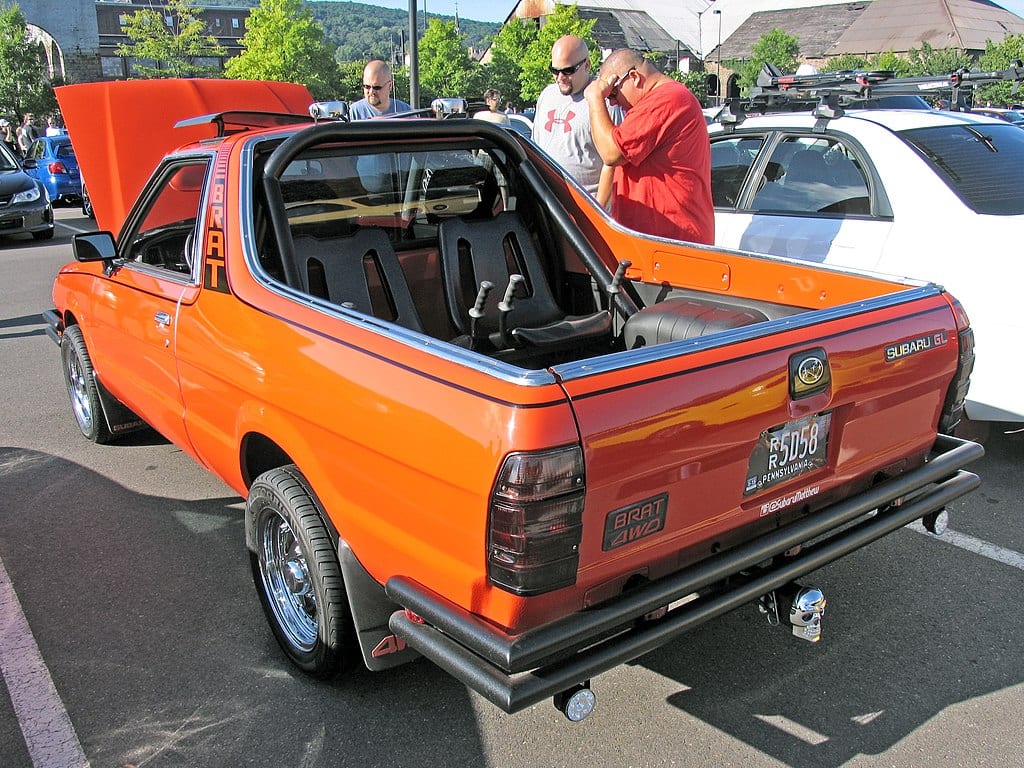 Imagine, if you can, a truck with factory-mounted seats in the bed — and spotlights the size of a 747’s landing lights mounted on its T-topped roof.

If you know this truck, you also know why it’s no longer available.

Such fun things are no longer allowed.

But in 1977, the Safety Cult — which ended such fun things — was still a backwater aberration, like dancing with rattlesnakes — and most people still esteemed fun over fear. There were roofless Broncos and K5 Blazers — and cars with beds.

You could buy all kinds of different stuff back when America was still a fairly free country — and the Subaru BRAT was as different as it got.

BRAT — all caps — was short for Bi-Drive Recreational All-Terrain Transporter. It was superficially similar to other small import pickups of the ’70s, such as the Datsun 620 and similar models from Toyota (SR5), Mazda (B210), and Chevy (via Isuzu) Luv.

But unlike them, it was a four seater — with two of the four in the bed, facing the other way. The seats were made of all-weather plastic and far from the most comfortable — but the view was spectacular. Watching the world recede as your progressed is another one of many freedoms denied today in the name of “safety.”

Subaru wasn’t “unconcerned” about “safety.” Grab handles — to keep passengers from bouncing out of the bed — were included. Though holding onto them made it harder to reach for a cold one in the cooler. That was another fun thing people did in pickups back in the day — before the Safety Cult put the kibosh on that, too.

The “chicken tax” hit trucks with just two seats — at the time almost exclusively the small import models, which didn’t offer the extended and crew cab configurations that are commonplace today.

By adding the extra seats in the bed, BRAT qualified as a passenger vehicle rather than a “light truck,” and thus Subaru evaded the chicken tax on a happy technicality — and was also able to sell the BRAT for less than two-seater rivals that had the cost of the tax folded into their MSRP.

Which was $4,199 back in ’77 — not including the optional removable T-tops. But the price did include a spare tire mounted under the hood and a spring-loaded door that concealed a built-in footstep to facilitate getting into the bed.

The extra pair of seats did more than just help Subaru dodge an obnoxious tax.

They made the BRAT much more practical as a people hauler that could also haul stuff. The extra seats — in the back — also endowed it with a snarky attitude that the more utilitarian compact pickups of the day couldn’t match.

The BRAT was also stylish — a striking contrast to other import trucks of the era, which weren’t. It borrowed themes from cars with beds, like the Chevy El Camino and Ford Ranchero — which had backward swooping C pillars and a car-like rake to their windshields.

They were however, still cars — and with only two seats, too.

And while they had beds and so could carry mulch or sheetrock like a truck — or even people, if they didn’t mind not having seats — the El Camino and Ranchero rode as low to the ground as the cars they were based on — and did not offer four-wheel-drive.

The BRAT came standard with it.

Well, sort of — depending on your definition of 4WD.

Historically, “4WD” meant a vehicle — usually a truck — equipped with a system that let the driver engage the front wheels when the rear wheels began to slip. Most of the time, the rear wheels propelled the vehicle.

In the BRAT, it was the reverse.

It was based on a front-wheel-drive car, the Leone (Lion), which at the time was Subaru’s largest, fanciest car. It was also the car Subaru used to pioneer powering all four wheels in something that wasn’t a truck — a common thing in today’s cars but a very uncommon thing in the early 1970s, when cars were two-wheel-drive (either the front wheels or the rear wheels — but almost never all four of them).

Subaru was among the first to apply the principle to a car — and then to a truck, at least kinda-sorta. The BRAT was basically a Leone with a different body — in the same way that a modern Outback is basically a jacked-up Legacy. And in the same way a modern Honda Ridgeline is actually a Honda Pilot … with a bed.

It’s a common practice because it allows a car company to make more than just one vehicle using a single “platform,” or underlying chassis.

Semantics aside, all four of the BRAT’s wheels were powered. Or could be powered. Just like a 4WD truck, the Soobie’s 4WD could be disengaged when extra traction wasn’t needed — and to save both wear and tear on the components as well as gas, since it took less horsepower to power two rather than four wheels.

But there wasn’t much power to toggle.

The early BRATs came standard with a 1.6-liter iteration of Subaru’s “boxer” (horizontally opposed) four-cylinder engine that made 67 horsepower, at your command via the standard four-speed manual or three-speed automatic transmission.

But then, it was 1977 — and the quickest car on the road that year was a 6.6-liter Trans Am packing 200 hp, which on a power-per-liter basis wasn’t all that much more powerful than the Soobie’s 1.6 liter engine.

The TA was quicker — but not by much. And it didn’t get 34 mpg on the highway, which the Subaru did. The TA also didn’t have almost 9 inches of ground clearance, as the BRAT had and — Smokey and the Bandit notwithstanding — couldn’t ford streams much less jump bridges.

The BRAT couldn’t jump bridges either, of course — at least, not without the assistance of Hal Needham (the stunt coordinator for Smokey and the Bandit, who totaled several brand-new Trans Ams making those jumps) but fording streams was no problem, and not getting stuck was what this thing was all about.

Especially later GL models, which featured low-range gearing, very much like a truck.

The BRAT helped establish Subaru as the go-anywhere brand … just not very quickly.

It did get a little quicker in 1981, when Subaru upped the underhood ante to 1.8 liters — which almost crossed the 100 hp threshold. A five-speed overdrive manual transmission eventually replaced the four-speed without overdrive, too. Later on, in ’83, a turbocharged and fuel-injected version of this engine was offered that did cross it — but this version of the BRAT was only offered with an automatic transmission and the single-speed 4WD/AWD system, still driver-selectable.

Riding in the bed became illegal — and this effectively illegalized the BRAT, or at least took away its signature selling point. Without the jump seats — and experience of riding facing backward — the BRAT was just another small pickup, like the rest.

It was dropped after the 1987 model year.

Subaru made an effort to revive the spirit of the BRAT in 2002 when it launched a BRAT-like vehicle called the Baja (no all caps because the name wasn’t an acronym). Instead of four seats — two in the bed — it had four doors, with the back seats inside and facing forward.

Which probably explains why the Baja only existed for three years before it got dropped. Though not a bad vehicle (it shared its platform with the same-era Outback wagon) it was a nothing-special vehicle. By 2002, AWD — or 4WD, whichever you prefer — was a commonplace feature available in many new cars, and many of these — including the Outback — also offered generous ground clearance and the ability to ford streams and unplowed roads.

The Baja did have a bed, but without those seats it was missing something. That certain something that makes the difference between a meal you remember and savor — and just dinner.

The BRAT was something special — and we shall not see its like again. At least, not until the leaders of Safety Cult are forced to drink their own Kool-Aid. Or just leave the rest of us alone.

• The original 1977 BRAT came standard with radial tires, tinted glass, and a pushbutton radio. It was, after, all, 1977.
• Available colors included Crystal Blue, Plaza White, Mild Yellow, Brilliant Red, and Sprite green. BRAT was spelled out on the C pillars in vertically stacked block letter decals.
• In addition to being one of the first vehicles of its type — a car-based utility vehicle with standard 4WD/AWD — the BRAT was also one of the first vehicles to come with more than a 12-month 12,000 standard warranty. Subaru included an 18 month/18,000 mile warranty with every BRAT sold.
• Ronald Reagan was a BRAT owner. His 1978 model (restored since his death) is now a static display at his California ranch.
• One of the reasons for the BRAT’s exceptional gas mileage — 34 highway would be a good number today — was due to its exceptionally low curb weight, just over 2,000 lbs. To get a handle on just how light that is, consider the weight of its attempted successor, the Baja. Though roughly the same overall size, the Baja’s curb weight was a beefy 3,485 lbs. or nearly twice the weight of the original ’77 BRAT. Which explains why the Baja only managed 26 mpg on the highway — which is only 1 mpg more than the ’77 BRAT delivered in city driving. Thank the “concerned moms” for this, too.