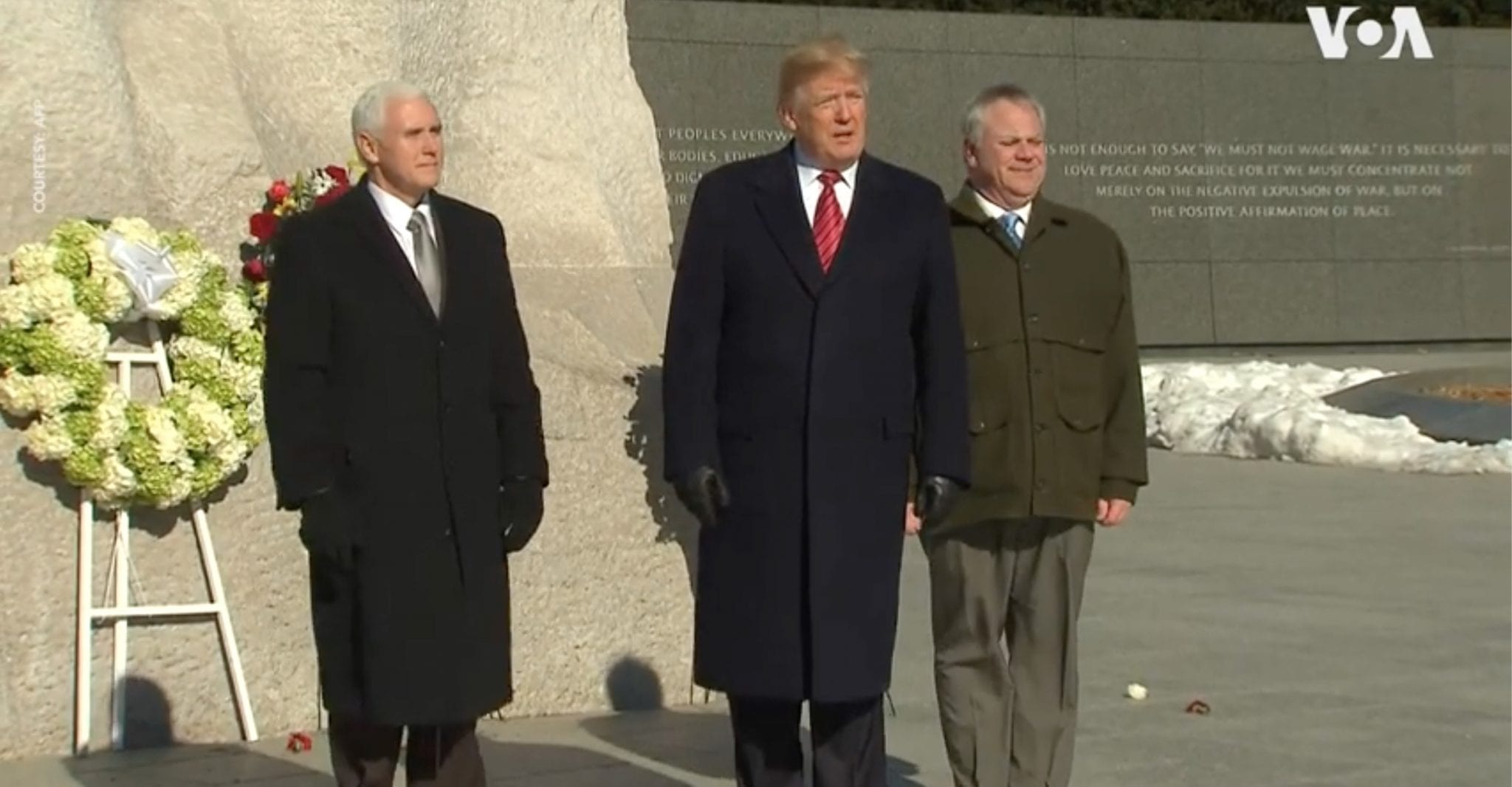 Two different men, two different times. But their respective message on racial equality is the same.

In a sense we’ve come to our nation’s capital to cash a check. When the architects of our republic wrote the magnificent words of the Constitution and the Declaration of Independence, they were signing a promissory note to which every American was to fall heir. This note was a promise that all men, yes, black men as well as white men, would be guaranteed the “unalienable Rights” of “Life, Liberty and the pursuit of Happiness.” It is obvious today that America has defaulted on this promissory note, insofar as her citizens of color are concerned. Instead of honoring this sacred obligation, America has given the Negro people a bad check, a check which has come back marked “insufficient funds.”

… And so even though we face the difficulties of today and tomorrow, I still have a dream. It is a dream deeply rooted in the American dream.

I have a dream that one day this nation will rise up and live out the true meaning of its creed: “We hold these truths to be self-evident, that all men are created equal.”

And here is President Trump in his recent address to the nation about the crisis at the southern border:

Just a short time ago, I had the honor of presiding over the swearing-in of five new great American citizens. It was a beautiful ceremony and a moving reminder of our nation’s proud history of welcoming legal immigrants from all over the world into our national family.

I told them that the beauty and majesty of citizenship is that it draws no distinctions of race, or class, or faith, or gender or background. All Americans, whether first generation or tenth generation, are bound together in love and loyalty, friendship and affection.

We are all equal. We are one team, and one people, proudly saluting one great American flag. We believe in a safe and lawful system of immigration, one that upholds our laws, our traditions, and our most cherished values.

Simply put, both men voiced exactly the same sentiment. They believed and believe in an America where, in Trump’s words, “We are all equal. We are one team, and one people…” or, in King’s version, an America where its citizens “will not be judged by the color of their skin but by the content of their character.”

The problem, of course, is that the American Left is hell and gone from Dr. King’s dream of equality for all.

Over at CNN, CNN political analyst Julian Zelizer, a professor of history at Princeton no less, illustrates exactly the problem that has swamped the American Left when it comes to celebrating Dr. King’s legacy. Zelizer is appalled that Vice President Mike Pence made the historically accurate observation that Trump, like Dr. King, was seeking a legislative solution to today’s crisis — the crisis at the border.

Well aside from the fact that one border security official after another has said that a wall is the solution (which Zelizer blithely ignores by asserting that “most experts” — unnamed — say otherwise), Zelizer stands up to support exactly the opposite of what King was saying in that famous speech.

King, like Trump now, was speaking out in favor of equality for all Americans. But alas it is the American Left that has turned its back on Dr. King’s call for a fulfillment of the dream of racial equality. For that matter, as often discussed here, the culture of racism that gave birth to the Democratic Party has never disappeared. From slavery to segregation to today’s identity politics, the Left’s obsession with judging others by race has never changed.

This was noted the other day in an Op-Ed in the Wall Street Journal by Coleman Hughes, a philosophy undergraduate at Columbia. The headline:

He flirted with democratic socialism and opposed the Vietnam War but stood against identity politics.

Hughes has it exactly right, saying among other things, this:

For critics of identity politics on the left and right, King’s appeals to common humanity over racial division are a rebuke not only to white supremacy but also to the racial ideology of today’s progressives. In this view, King’s dream of a colorblind America—where the content of our character matters more than the color of our skin—is hampered by progressives’ focus on checking white privilege and stoking black grievance.

… With regard to the role that racial identity should play in politics, King was unequivocal: First and foremost we are human beings, not members of races. The verbal tic of modern racial-justice activists — “As a black man…” — would sound foreign on his lips. Even when fighting explicitly racist policies, he deployed universal principles rather than a tribal grievance narrative.

“The problem is not a purely racial one, with Negroes set against whites,” King writes of the civil-rights movement in his 1958 essay “Three Ways of Meeting Oppression.” He adds that “nonviolent resistance is not aimed against oppressors but against oppression. Under its banner consciences, not racial groups, are enlisted.”

King’s contemporary counterpoints were the Nation of Islam and the black-power movement, which emphasized racial division over common humanity. King didn’t mince words when addressing these movements in a 1960 speech at DePauw University. “Black supremacy is as dangerous as white supremacy, and God is not interested merely in the freedom of black men,” he said. “God is interested in the freedom of the whole human race and in the creation of a society where all men can live together as brothers.”

Dr. King is celebrated in name only by the Left today, as that Zelizer column makes perfectly clear. And for a reason — identity politics. The irony does not escape that those who use Dr. King’s name to oppose the border wall deliberately ignore someone like Jamiel Shaw, Sr. Mr. Shaw, a black man, had his 17-year old son — a star athlete being courted by Stanford and Rutgers — shot to death by an illegal immigrant who was a gang member. Mr. Shaw became a strong supporter of the then-presidential candidate Trump because Trump had focused on illegal immigration as a serious problem. Mr. Shaw completely supports building the wall for an obvious reason: he wants no more killings in America that took the life of his son. Killings that have taken the lives of Americans who are white, black and yes, Hispanic.

What Professor Zelizer is attracted to is the fact that, as Hughes notes, Dr. King did indeed flirt with policies that leaned to Democratic Socialism, and he in fact was an opponent of the Vietnam War. Notably, Zelizer says this of Trump:

President Trump has even praised autocrats, like North Korea’s Kim Jong Un and Russia’s Vladimir Putin, all over the world who oppose the fundamental rights that King defended.

There is no recognition that in the day those who opposed the Vietnam War were often accused of supporting Ho Chi Minh and the Vietnamese Communists — decided opponents of the “fundamental rights” supported by Dr. King. Not to mention that many on the American Left — think FDR’s Vice President Henry Wallace and South Dakota Senator George McGovern — were repeatedly accused of being “soft on Communism” — which is, to say again, supporting those on the world stage who opposed the “fundamental rights” that Dr. King was demonstrating for in America.

But the central problem here is the American Left’s insistence on effectively re-segregating America with identity politics. Thus undoing all of the work that Dr. King spent — and gave — his life to achieve.

Vice President Pence was exactly correct to cite Dr. King’s work. With reason. Because when it comes to racial equality and a colorblind America, Dr. King and President Trump were and are on exactly the same page and the same team.

That team would be Team America — the team where, as President John F. Kennedy once said, “race has no place in American life or law.”