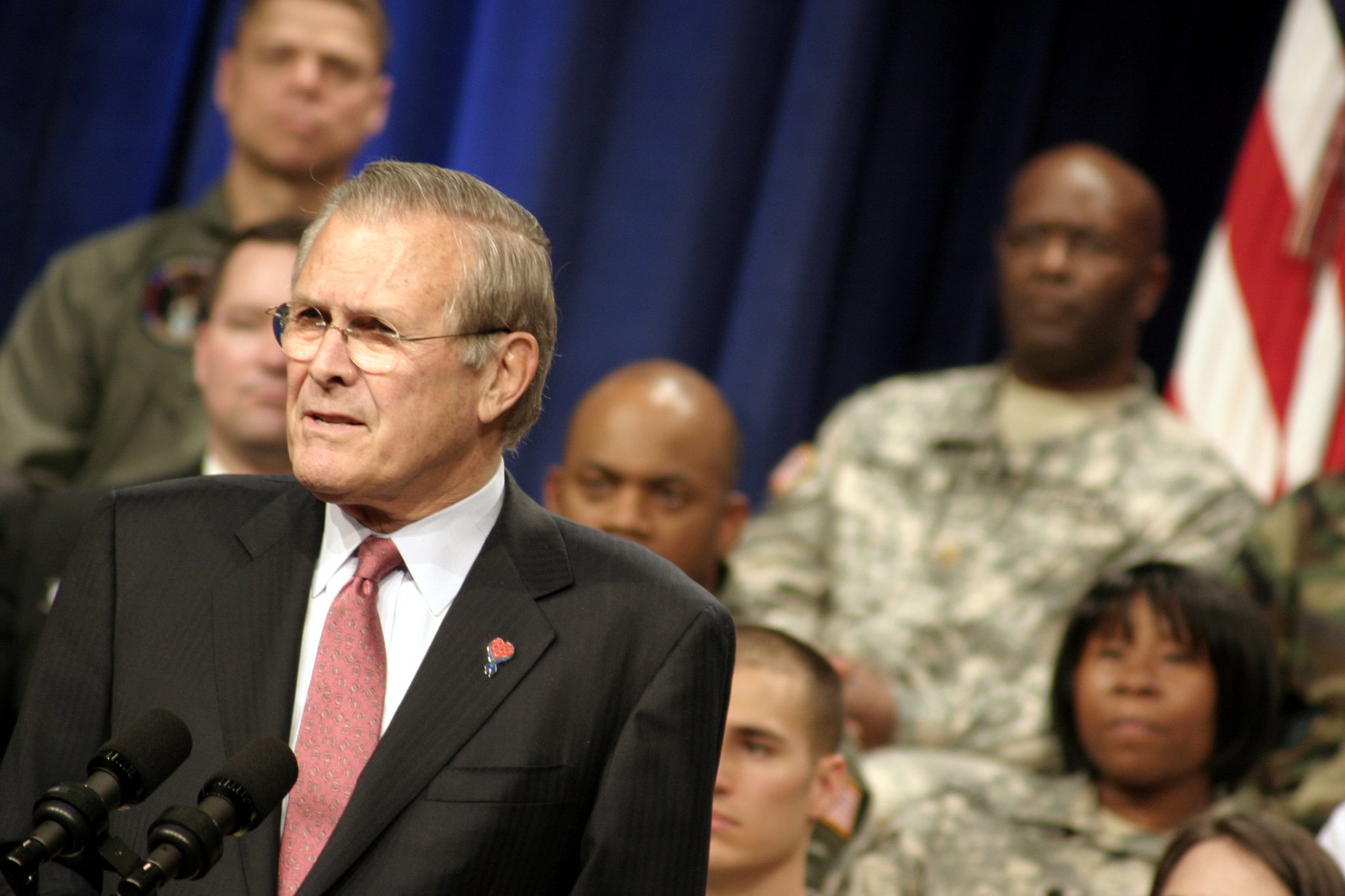 If you know nothing else about former Secretary of Defense Donald Henry Rumsfeld, who died last Wednesday at age 88, you should know this.

At 9:37 a.m. on September 11, 2001, al-Qaida terrorists crashed United Airlines Flight 77 into the west side of the Pentagon. One of the first rescuers on the scene was the 69-year-old secretary of defense, Donald Rumsfeld. As rescue teams, firefighters, and police arrived, Rumsfeld’s protective detail finally pulled him away to begin to manage the war that had just killed 3,000 Americans on our own soil.

Rumsfeld’s actions that day demonstrated his lifelong commitment to the security of the United States and the safety of its citizens.

Rumsfeld was a brilliant and intense man, bursting with talent and energy. His term as secretary of defense for President George W. Bush — the second time he’d held that office, first as the youngest ever secretary of defense and then as the oldest — was the capstone to a political career that included being elected to four terms in the House of Representatives, serving as White House chief of staff to President Gerald Ford, and acting as chairman for a major pharmaceutical firm.

Rumsfeld can fairly be characterized as an American statesman. He was a deep thinker, a planner, and someone who was, at several times in his life, able to bring his ideas to fruition.

While serving as Gerald Ford’s chief of staff, Rumsfeld saw firsthand the intense rivalries among advisers for influence over the president. When Ford nominated him to defense secretary (a post he held from 1975–77), Rumsfeld engaged in that competition for influence with characteristic vigor.

His principal competitor was then-Secretary of State Henry Kissinger. When I interviewed Kissinger decades later, he told me that Rumsfeld was a skilled bureaucratic opponent, which probably means Rumsfeld won a few of their battles for Ford’s policy decisions. They respected each other, but they weren’t friends.

Some of Rumsfeld’s greatest accomplishments were achieved during the years between his first term as secretary of defense and his second term, which was from 2001–06.

One of them was in the long-forgotten “Rumsfeld Commission,” formally the “Commission to Assess the Ballistic Missile Threat to the United States,” which reported its findings in 1998. That report formed the basis for Bush’s action in December 2001 when he very wisely announced that the U.S. would withdraw from the Anti-Ballistic Missile Treaty with Russia.

Attached to that report was the even more obscure “Intelligence Side Letter” to the Rumsfeld Commission report, which illuminated the intelligence problems that led to the intelligence community’s failure to warn against the 9/11 attacks.

The Side Letter made two important findings. First, it found that the intelligence community was not positioned to address the ballistic missile threat because it lacked technical and language expertise and “in-country” capabilities of people who understood our adversaries’ cultures and governments. That lack of in-country capabilities is almost certainly still valid.

The Side Letter also severely criticized the failure of senior intelligence consumers — the president, the national security adviser, senior military leaders including the secretary of defense, and others — to interact sufficiently with intelligence analysts, thereby depriving both the consumers and producers of the ability to respond to each other’s understandings and needs. The intelligence community’s utter failure to warn us of the 9/11 attacks was at least in part due to that shortcoming.

And then came 9/11. Rumsfeld is sometimes called the architect of the wars in Afghanistan and Iraq, and that is close to the mark. But, on at least two of the most important issues of how those wars were fought, Bush was, as he once said in another context “the decider,” and overruled Rumsfeld.

Rumsfeld was always opposed to nation-building, the strategy Bush set out on and has failed for 20 years. Rumsfeld also understood — unlike Bush, Obama, Trump, and Biden — that in order to defeat Islamic fascism and the terrorism it breeds, we would have to attack and defeat the Islamist ideology.

On both of those issues, George W. Bush went against Rumsfeld’s advice.

During his 2000 presidential campaign, Bush said that our military should be used to win wars, not build nations. But by the time we went to war in Afghanistan in October 2001, he was either converted to neoconservatism or — more likely — became captive to the advice of then-Secretary of State Colin Powell.

Rumsfeld was unable to convince Bush against nation-building in both Afghanistan and Iraq. In his book, Known and Unknown, he writes, “ ‘It’s my view that we need to limit our mission to getting the terrorists who find their way to Afghanistan,’ I advised the president. ‘We ought not make a career out of transforming Afghanistan.’ ” But Bush decided to just that.

Entering into another nation-building exercise was not Rumsfeld’s intent in invading Iraq. Though Rumsfeld never told me this, I concluded from other sources that there were two plans offered to Bush for the Iraq war. The first, drafted by Rumsfeld and his Pentagon team, called for an invasion, killing a lot of people who needed to be killed, toppling Saddam Hussein, and then leaving Iraq in a matter of months.

The other plan, crafted by Powell and CIA Director George Tenet, required toppling Saddam and then rebuilding Iraq in our image. Powell and Tenet prevailed despite Rumsfeld’s advice.

If you read the memoirs written by Bush, Cheney, Rumsfeld, and former British Prime Minister Tony Blair, you find that the only ones who understood that the war against Islamic terrorists and the nations that harbor them is an ideological war were Blair and Rumsfeld.

Rumsfeld understood that we cannot win the war against Islamic terrorism without defeating its ideology.

Once, after his second term in the Pentagon ended, I asked him why we weren’t fighting the ideological war. He told me that he had tried to do so — attempting to organize a multi-department effort at the cabinet level — but Bush wouldn’t back him up, so the effort died. Obama preemptively surrendered the ideological war, and Trump never understood its necessity. Thus, we are condemned to perpetual war against Islamic fascism.

Beginning in 2005, I was privileged to become a member of the group of military analysts — TV “talking warheads” who were former or retired military officers — brought into the Pentagon frequently to receive briefings on the Iraq and Afghanistan wars from Rumsfeld himself and most of our top military leaders. Among them were two successive chairmen of the Joint Chiefs of Staff — Gens. Richard Myers and Peter Pace — as well as commanders of the Afghanistan and Iraq wars such as Gens. George Casey and David Petraeus.

Yes, we heard only one side of the story. Yes, the Defense Department public affairs staff bent over backwards to answer our requests for information and access. But most of us, I believe, had good enough judgment to reach our own conclusions.

With other members of the group, I visited Iraq and the Guantanamo Bay terrorist detention facility. Separately, on occasion, I interviewed Rumsfeld or one of the top generals for print or on radio. Through those experiences, and in meetings with Rumsfeld after he left the Pentagon, I was able to get to know him as well as an outsider could. I admired him despite the media’s vilification of him and probably in part because of it.

For a while after 9/11, Rumsfeld was a media darling. The invasion of Afghanistan began in secret in October 2001 but quickly became public, and the Iraq invasion in 2003 was highly publicized and debated before it began.

Rumsfeld reveled in sparring with the press. I remember he once paused over a question for a bit too long and, finally, grinning while he told the reporter something like, “I’m trying to think of how best to not answer your question.”

Before the Iraq invasion, both our “allies” in Europe and the media quickly shifted to oppose that war. I remember French Foreign Minister Dominique Villepin being asked on the first day of the Iraq invasion who he wanted to win the war. De Villepin refused to answer the question.

All too quickly, Rumsfeld went from media darling to media villain, which is reflected in the horrific comments by many in the media upon his death.

Rumsfeld left the Pentagon in 2006 and should have been smiling when he did. He survived the Abu Ghraib prisoner abuse scandal, with which he had no connection, because Bush was smart enough to reject his resignation letter. Rumsfeld survived the “generals’ revolt” because the ex-generals who launched their attack on him for the handling of the Iraq and Afghanistan wars were people in highly responsible positions who hadn’t voiced their criticisms when they were on active duty.

And then there was the 2008 New York Times attack on the “military analyst” group of which I was a member.

The group was always somewhat controversial because media members who were left out were jealous. As soon as Rumsfeld left the Pentagon, his successor, Robert Gates, disbanded the group.

The Times article, for which the reporter received a Pulitzer Prize, alleged that we were mouthpieces for the Pentagon, regurgitating its talking points for the benefit of getting the inside track. Several members of the group probably did so. The article also alleged that many of the group had connections to contractors who were benefiting from their connections to Rumsfeld.

That article precipitated a Defense Department Inspector General investigation. Over a period of months, all of the members of the group, myself included, sat for inspector general interviews.

The investigation determined that there had been no violations of the law or Department of Defense regulations. That ended the matter.

America lost a great statesman and brilliant thinker when Donald Rumsfeld died. His legacy is a cornucopia of wisdom that future presidents should come to understand and build upon. Rest in peace, Mr. Rumsfeld. We who knew you, even tangentially, understood the enormous contributions you made to our nation.