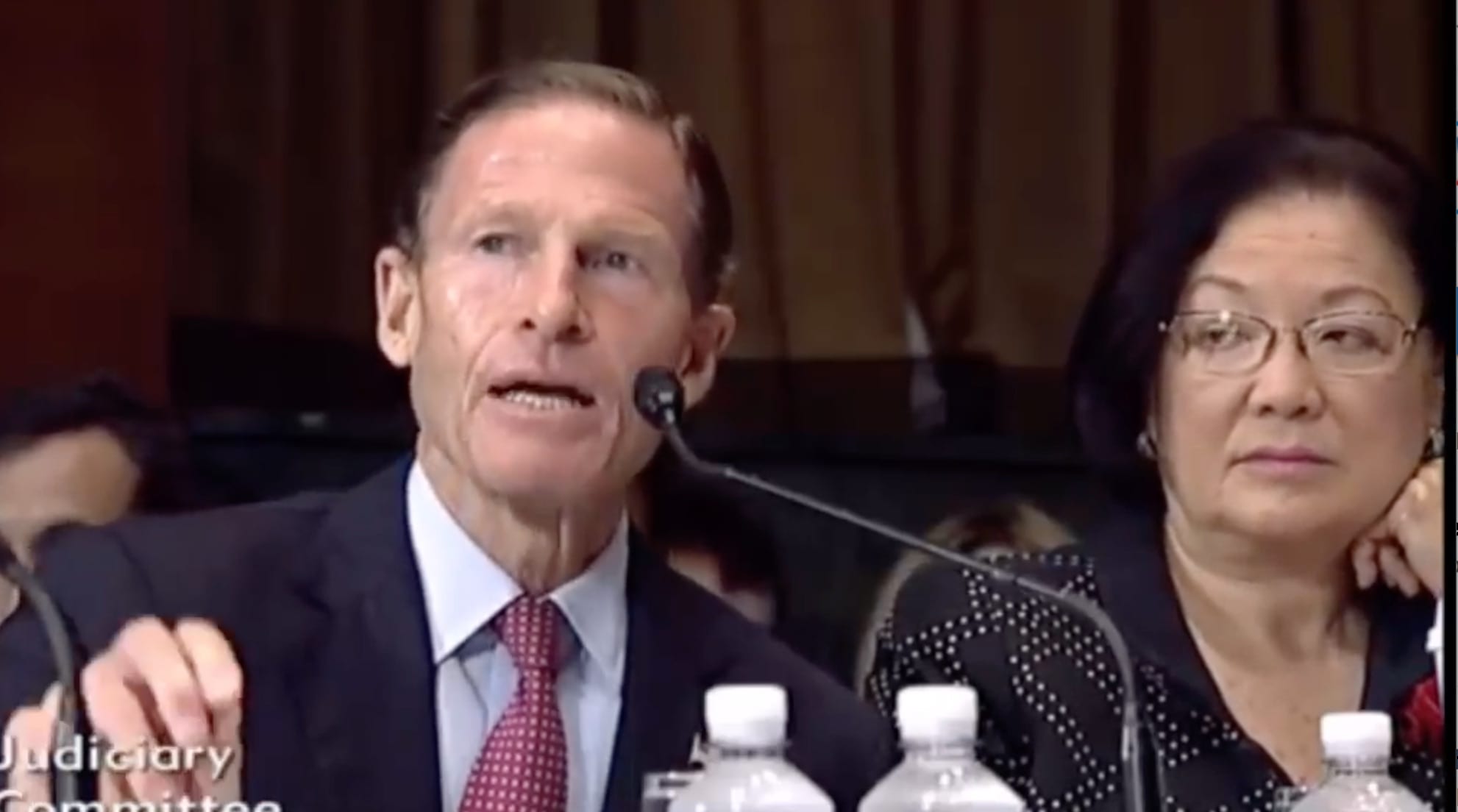 If you want to know how life as an American will change if the Democrats win majorities in the House and Senate, an illuminating glimpse of that dystopian future was provided during last Thursday’s meeting of the Senate Judiciary Committee. The transparently counterfeit compassion received by Christine Blasey Ford and the remorseless cruelty meted out to Brett Kavanaugh constitute a perfect microcosm of the Democratic governing philosophy — fake empathy for the vulnerable and unremitting malice toward the “deplorable” majority of Americans who oppose their increasingly authoritarian agenda. The Democratic Party has no real ideology beyond an insatiable lust for power.

If you doubt that, consider a Marist survey conducted last week indicating that only a third of the voters believe Christine Blasey Ford’s accusations against Brett Kavanaugh. The poll found that only 32 percent of voters believe Ford “is telling the truth about what happened.” The survey also found that a mere 35 percent of women believe Kavanaugh’s accuser. Equally revealing is a YouGov poll indicating that last week’s disgraceful Democratic antics had no real effect on Judge Kavanaugh’s support: “There appears to have been little net movement in support for Kavanaugh’s confirmation.” But the Democrats couldn’t care less. They want control of the Court at all costs. Michael Goodwin explains:

While there is no moral or principled defense for the Dems’ conduct, the explanation is that they are terrified of Kavanaugh because he would be the fifth constitutional conservative on the court.… That would be a death knell to much of their party’s game plan because the left has used the courts for 60 years to get big-government policies imposed on the nation that they couldn’t get through legislation.

And, if that means destroying Kavanaugh’s life, so be it. Naturally their allies in the media are all in, smearing Kavanaugh with undisguised glee. Perhaps the most despicable example was published in USA Today, where a “sports” journalist wrote, “The U.S. Senate may yet confirm Kavanaugh to the Supreme Court, but he should stay off basketball courts for now when kids are around… credibly accused sex offenders should not coach youth basketball, girls or boys.” This was so disgusting that even Never-Trumpers like Charles C.W. Cook denounced the vile attack: “This is a truly evil piece.” The Washington Post takes the marginally less offensive position that he’s guilty merely because he went to good schools:

How could a man who appears to value honor and the integrity of the legal system explain this apparent mendacity? How could a man brought up in some of our nation’s most storied institutions — Georgetown Prep, Yale College, Yale Law School — dissemble with such ease? The answer lies in the privilege such institutions instill in their members, a privilege that suggests the rules that govern American society are for the common man, not the exceptional one.

So where are all the “moderate” Democrats on this garbage? They are silent. Despite the brazen lies red state Democrats like North Dakota’s Heidi Heitkamp and West Virginia’s Joe Manchin tell their constituents, they are not weighing the “merits” of the Kavanaugh nomination. They are merely waiting to see if Republicans like Maine’s Susan Collins, Alaska’s Lisa Murkowski, and Arizona’s Jeff Flake will support Kavanaugh in a final floor vote. If any two of these three decide to betray their constituents, Heitkamp and Manchin will be ordered by their Beltway masters to vote against Kavanaugh. Nonetheless, there is a glimmer of hope. James S. Robbins points out what this fight really means for men:

Men are rightly concerned about Democrats normalizing the idea that raising 30-to-35-year-old charges with no hard evidence and no presumption of innocence can wipe away reputations and careers. Why would any man vote for a political party that is generating this toxic environment? If Democrats win on Kavanaugh, these tactics will be become commonplace. Any man could find himself facing unprovable accusations automatically taken as fact.… Imagine the impact on workplace disputes, divorce proceedings, or any situation in which a man might stand accused, rightly or not.

And it’s not just men who worry. Mothers, sisters, and daughters of good men fear the consequences of a Kavanaugh defeat under such circumstances. The Washington Examiner reports that Wyoming Representative Liz Cheney expresses similar concerns that due process may be dead if Kavanaugh is denied confirmation: “As a mom of daughters and sons, I fear this, too.” Martha MacCallum, who interviewed the judge and his wife last week, says she is hearing from huge numbers of women who fear the consequences for their sons if Kavanaugh is defeated. These women are concerned that the presumption of innocence will not apply to their sons, and well they should be. MacCallum Tweeted:

I keep hearing from Moms of sons, who fear that due process is dead and that if BK goes down, it will set an unfair precedent where evidence is unnecessary.

All of which brings us back to the future, and what kind of America we want to leave for our children. The Democrats and their supporters frequently present themselves as social justice warriors. But they don’t really seem very partial to actual justice as codified in the Constitution as well as millennia of tradition and common law. The presumption of innocence, to coin a phrase, is the golden thread of English and American common law. And it applies to the Public Square as well as the courts. You can’t have genuine justice without it, and you can’t privilege females over males in its application. That’s what the Democrats are willing to do for the sake of power, and it’s precisely why they aren’t fit to govern.