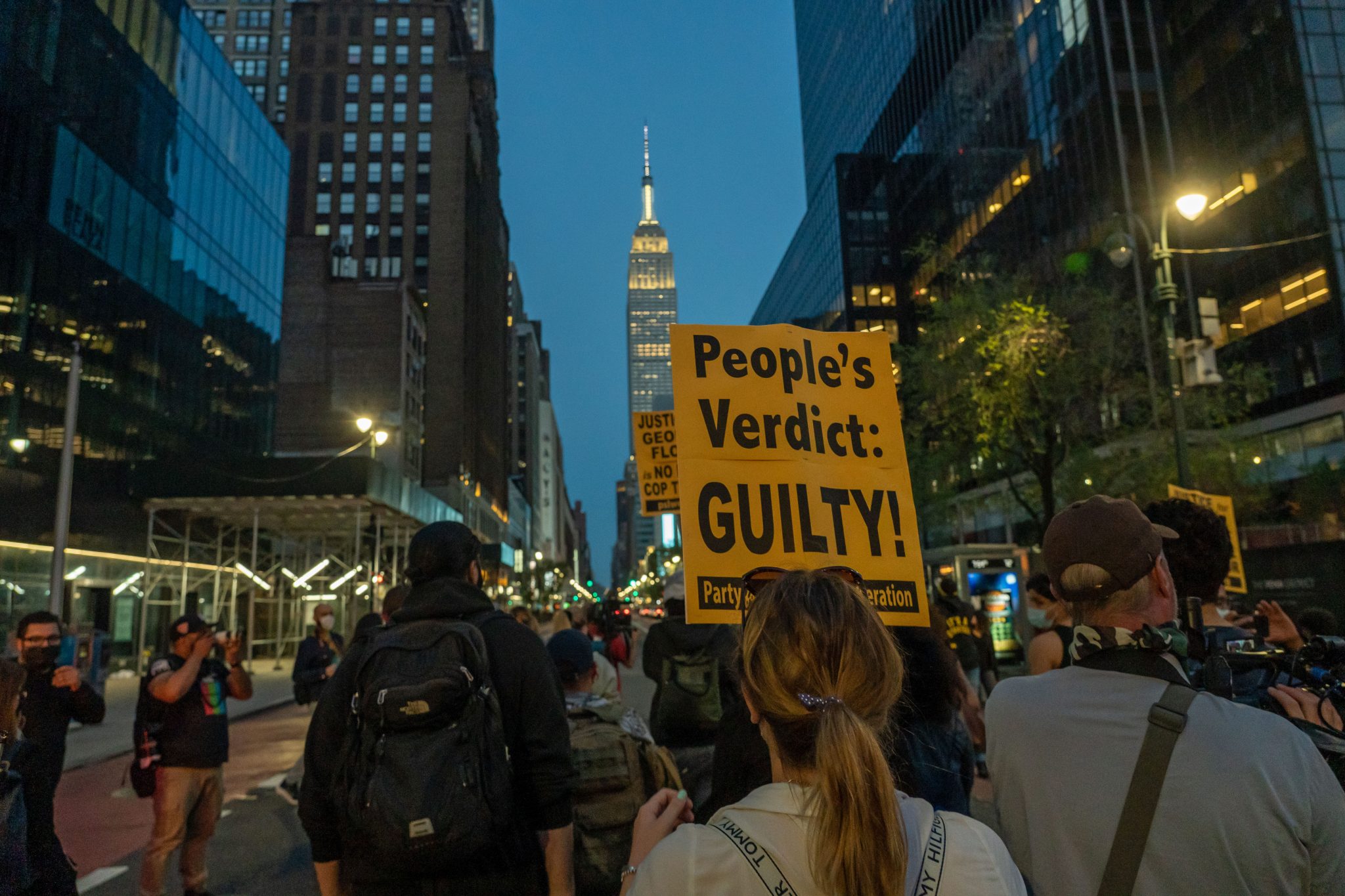 The Government has asked the Minnesota court that convicted Derek Chauvin to lock him up for the next 30 years. The judge will announce the verdict on June 25.

I am no Chauvinist. Whatever side Derek Chauvin is on in the world of law enforcement, that is not mine. Yes, I am satisfied that he did not kill George Floyd. The science is settled. I also am satisfied that George Floyd was a social miscreant who made our world and country just a little bit less wonderful than they would have been without him. George Floyd — Say His Name! — was a druggie with all sorts of forbidden controlled substances in his bloodstream. He once held up a Black woman and stuck a pistol into her pregnant tummy, threatening to murder her. He had a long rap sheet. He was not rehabilitated. Apparently, his last known active act was passing counterfeit bills while pumped up with illegal substances, and his last passive act was refusing to comply with simple police instructions to get into the car. As recounted objectively in Wikipedia in pertinent part:

Between 1997 and 2005, Floyd served eight jail terms on various charges, including drug possession, theft, and trespass…. In 2007, Floyd faced charges for aggravated robbery with a deadly weapon; according to investigators, he had entered an apartment by impersonating a water department worker and barging in with five other men, then held a pistol to a woman’s stomach and searched for items to steal. Floyd was arrested three months later during a traffic stop and a 7-year-old victim of the robbery identified him from a photo array. In 2009, he was sentenced to five years in prison as part of a plea deal and was paroled in January 2013.

This is an icon? I feel pity for those conned into idolizing heroes who offer little to adulate. Consider those who foolishly identify and associate with the racist, anti-Semitic Black Supremacist group that cynically calls itself “Black Lives Matter.” Of course Black lives matter! That is a major reason that 110,000 Union soldiers gave their lives on the Civil War battlefields, and 360,000 Northerners in all died for Black freedom. Black lives matter very, very much. They matter every weekend night in Chicago, too. They matter everywhere that a Black person exists. Likewise, White lives matter — just as much. So do Arab Muslim lives, Jewish lives, Christian lives. How tragic that kids who grew up learning about President Abraham Lincoln’s Emancipation Proclamation and about the Rev. Dr. Martin Luther King Jr. now must watch their grandchildren, enrolled in Critical Ethnic Studies public school curricula, instead being taught that President Lincoln was a racist, Rev. Dr. King an “Oreo,” and the real heroes for children to emulate are Al Sharpton, Michael Brown of Ferguson, and George Floyd of Minnesota.

Well, at least my grandchildren will not be getting inculcated with that. Our role models remain Avraham Avinu and Sarah Imeinu (Patriarch Abraham and Matriarch Sarah), their next generations, then Moshe Rabbeinu (Moses our Teacher), Joshua, other great Biblical prophets, judges, and kings, and later figures like Rabbi Hillel and Rabbi Akiva, Rashi and Rambam. And we also reverentially teach our children about George Washington’s heroism, his crossing the Delaware and “never telling a lie,” and about that borrowed book that Young Mister Lincoln returned amid the downpour. Those are our heroes here — Christopher Columbus, Paul Revere, Nathan Hale.

I still remember the day we had a substitute teacher in yeshiva high school because we had driven our regular English teacher to call in sick for a day to regain his mental health and to recondition his nerves. We tried to convince the substitute teacher that it was time for recess, even though our break still was 30 minutes away. He would not let us out early. One of us in the back of the classroom muttered: “Geez — wouldja just gimme liberty or gimme death!” We all giggled. The sub was not amused and wanted to know who had the big mouth, so he glared at us and asked, “OK, Big Mouth in the Back. Don’t just hide in the back. Stand up and show your face. I wanna know who said that, and I wanna know … now!” And of course someone else chirped, “Patrick Henry!”

That is, even the disrespectful teen louts among us knew stuff. And although we all convinced Goldstein, when preparing for the American history final exam, that Abraham Lincoln’s Gettysburg Address was 6969 Bowling Lane, at least even Goldstein went into that exam knowing that there was a Lincoln Gettysburg address, albeit lower case “a.” (Not to worry — Goldstein eventually became a doctor. And a department chair at a major hospital. His immigrant grandmother may not have known about Lincoln’s address either, but she made sure that Goldstein’s Manhattan medical address would not and shall not perish from the Earth.)

So I truly pity those now being “woke-math’d” and “1619’d” into honoring George Floyd. And, as for the anti-Semitic Black Supremacist fraud that is “Black Lives Matter,” from Ferguson to Palestine it all is built on lies.

Yet I also was disgusted with Chauvin before I knew his name, the moment I saw that photo and video. I remember telling two colleagues the day the story broke that I hoped with all my pixie dust that President Trump would get into Air Force One and fly immediately to Minnesota to meet with the Floyd family. If he had done so. If only he had done so. But he had much smarter inside advisers and strategists than I.

My heart went out to the Floyd family. No matter how george-floydish a person is, no one deserves that. There are other ways to subdue a person and to take him into custody. As simple proof: how often does anyone among us ever see such a picture or video, or even hear of one, even on TV or in the movies? As strong a police supporter as I am — my motto: Defend the Police! — I am no Chauvinist.

Among the subjects I teach — Talmud, Torah weekly portion, laws and customs of Jewish religious observances, California Civil Procedure: Practice and Procedure, Advanced Torts, Civil Remedies — one of my very favorites is American Jewish history. Presently my twice-weekly class in American Jewish history is at Session 13. We just finished covering Landsmanschaften, Lower East Side tenement living, and the New York and Cincinnati Kosher Meat Boycott and Street Riots of 1902. Next Sunday is the tragic 1911 Triangle Shirtwaist Fire. Well, three sessions ago we covered the 1913 frenzied Leo Frank trial and the 1915 lynching. Because I always keep my personal politics out of my rabbinic and law classes, I did not offer my own personal thought that Derek Chauvin, whom I incline to despise, truly was denied full justice in court — in a way, as was Leo Frank. Chauvin never had a chance.

At the Leo Frank trial, the jury was prejudiced, there were loud mob chantings and threats of violence confronting jurors outside the courtroom. The whole thing was a travesty and mess.

I have been an attorney for 27 years and, overlapping, a law professor for 16 years alongside my 40 years in the rabbinate. I have watched episodes of Perry Mason, L.A. Law, Judge Judy, Judge Wapner (and Rainman), Boston Legal, and Night Court. Also all the must-see law movies: The Verdict, Absence of Malice, Class Action, To Kill a Mockingbird, Judgment at Nuremberg, Liar Liar, and My Cousin Vinny. I know something about justice. Derek Chauvin did not get what we like to call “justice.” He got mostly the quotation marks.

His trial demanded a venue change. He was tried in an incredibly frenzied environment where several witnesses on his behalf were intimidated from testifying to their evidence or bullied for standing by their testimony. George Parry’s powerful article here in The American Spectator offers an incredible insight. The jurors were not sequestered but were sent home nightly, thus were subject to the same public frenzy we all were, but they also had deep reason to fear for their own safety if they would vote to acquit. The city and news media reported that the Government had approved a $27 million payment to the family. Imagine being a Chauvin juror and reading or hearing that one: “Hmmmm.” Chauvin never had a chance.

There certainly are those who will retort, “Y’know what? He did not deserve to have a chance. After all, what chance did he give George Floyd?” And, OK, fair enough: If those were the agreed-upon rules of that game — that Chauvin never deserved to have a fair chance in court — so be it.

But if the idea was that he was going to get a reasonably fair trial, with all the protections of procedural and substantive due process, a fair and dispassionately objective jury, who would be presented with evidence and contradictory impeaching testimony, sequestered from media frothing at the mouth, in an environment that no juror would fear that a “Not Guilty” verdict would set off pogroms throughout the city or would lead to the jurors and jurors’ families and homes being branded for vengeance …