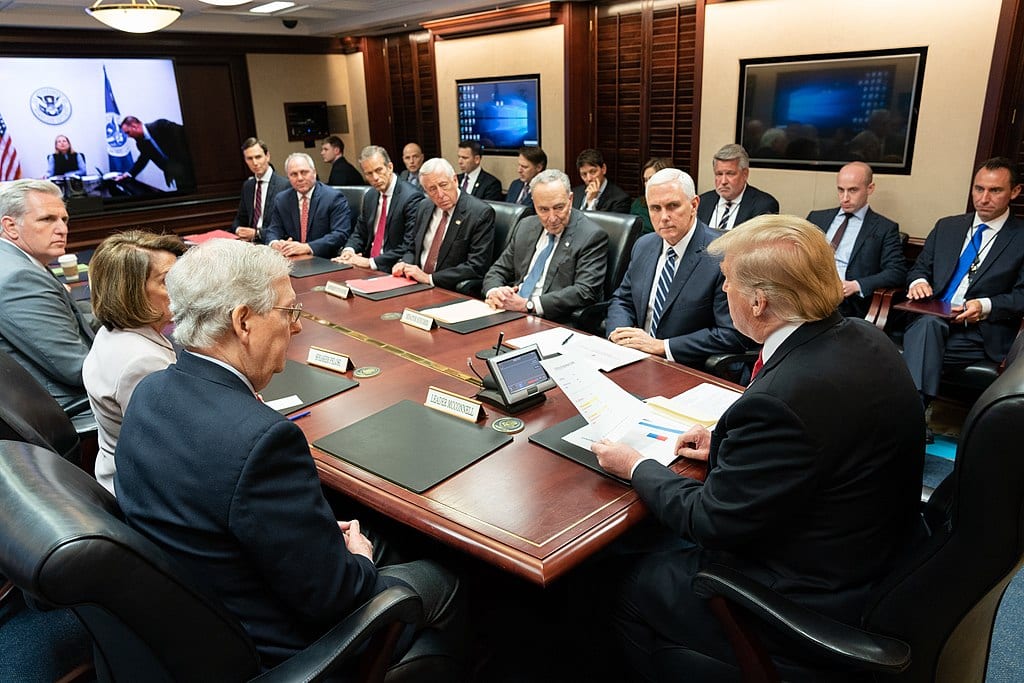 Democrats hate that Trump exists, yet they cannot exist without Trump. This paradox is the lesson taken from less than three months of Democrats’ control of the House. Trump not only gave them their majority, but their identity. Opposition to him is the only thing effectively uniting them.

When Democrats captured the House in 2018, we were told that this was the future. The political system had righted itself. The party that had won 2016’s popular vote had done it again in Congress’s popularly apportioned body. We would now see their agenda and governing and, in two years’ time, Trump would be swept from office.

In just over two months, this has not proven true. Apologists explain it away as political growing pains. However, Democrat leaders’ response to their painful growing argues their problem is fundamental and inherent.

Democrats have not demonstrated they cannot govern with their agenda, as much as they have shown they have no unifying agenda with which they can govern.

Unmistakable evidence comes from several easily overlooked episodes. One involved routine procedural exercises. Known as “motions to recommit,” this procedural device allows the minority a last opportunity to amend legislation before a vote by the full House. The majority routinely swats these away. Already, Republicans have won two because of Democrat defections.

The first was a condemnation of anti-Semitism added to a resolution against U.S. involvement in Yemen. The second occurred on legislation requiring background checks on all gun purchases. To this, Republicans successfully added a directive that Immigration and Customs Enforcement (ICE) be notified if background checks discovered illegal immigrants. The latter provoked a bitter internal Democratic caucus meeting to privately air grievances.

Bad enough, these were quickly followed by the need to address anti-Semitic remarks by one of their own. The usual remedy would be to put the House on-record with a meaningless but overwhelming vote condemning such sentiments, and then move on. However, what ensued was a weeklong internal debate prompted by the Democrats’ left.

Perceiving one of their own being singled out, the left demanded — and received — a far more expansive and anonymous resolution. Rather than minimizing the initial damage, Democrats’ internecine warfare maximized it, while again publicizing their divisions.

Altogether, these votes are inconsequential — the equivalent of political paintball — but they raise the question what will happen when real bullets fly. America is unlikely to have to wait long for an answer.

Democrats appear intent on avoiding live-fire exercises at all costs. The two motions to recommit losses already have prompted internal calls to get rid of the procedure. The same avoidance strategy is being speculated about this year’s budget.

The budget is policy rendered in numbers. As such, it represents a party’s most comprehensive and detailed agenda. But Democrats are seriously considering not writing one this year. The internal policy debates it would ignite — such as over the Green New Deal — are a bigger risk than presenting an alternative to Trump’s budget.

In just their first third month in the majority, it is clear Democrats are caught in a more-deadly crossfire than Republicans faced when they controlled the House. They face greater intra-party challenges that appear to be growing.

Only the most liberal Members need not worry about challenge from the left in their primaries. This means most must vote accordingly. However, this exposes them to challenges from the right in their general elections, and thirty-one House Democrats hold districts Trump won in 2016.

For the most part, Republicans during their majority only worried about a challenge from one side or the other — not both — as today’s Democrats do.

A group protecting itself from a one-direction threat still moves together. A group, facing threats from opposite directions, splits. Such fissures become liabilities in themselves.

In addition to undermining Members individually, such splits undermine the whole. The majority’s ability to get things done is undercut. Their ability to govern becomes questionable, which in turn undercuts the argument why their majority is important.

In less than three months, it has become clear that opposition to Trump is the primary thing uniting Democrats. The recent arrival of the Mueller report will likely test Democrats’ unity even more, as the most extreme Members seek to compensate for their disappointment in its contents.

However, Democrats’ knee-jerk opposition is no more than a short-term solution — papering over the internal political paradox. Reactive opposition to Trump is no substitute for Democrats having their own proactive agenda. Yet the proactive agenda on which they could potentially agree threatens to divide America from them. Perversely, Democrats’ best hope is their worst prospect: Trump remaining in office and saving them from themselves.