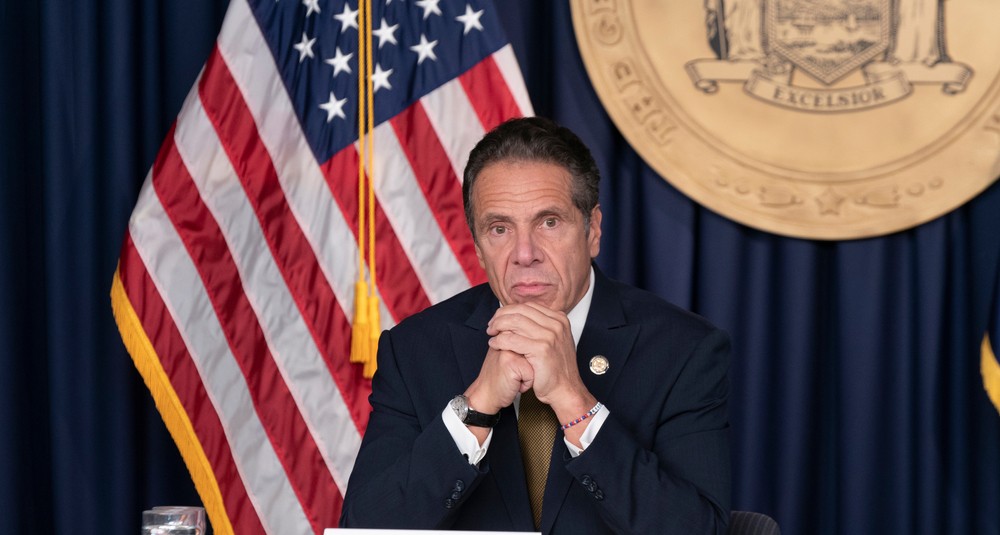 Here’s the headline at Fox News:

The Fox story begins this way:

Republicans in the New York State Assembly on Monday announced an impeachment resolution against Gov. Andrew Cuomo, saying they believe the Democratic governor has lost “credibility and trust” and has an “inability to lead” the state of New York amid sexual harassment allegations leveled against him and investigations into his handling of the coronavirus pandemic.

New York State Assembly Minority Leader Will Barclay, alongside other Republicans, laid out the plan to introduce an impeachment resolution on Monday.

Gov. Cuomo insists he will not resign. He was elected, he says, not by politicians but the people of New York.

The Democrats’ State Senate Majority Leader Andrea Stewart-Cousins has come out and said, “For the good of the state Governor Cuomo must resign.”

The Democrat who serves as the New York state assembly speaker, Carl Heastie, said the allegations of sexual harassment swirling around Cuomo are “deeply troubling.” Heastie added, “We have many challenges to address, and I think it is time for the Governor to seriously consider whether he can effectively meet the needs of the people of New York.”

But people have to believe you to be effective as a leader and obviously you know what the state Senate majority leader said was a powerful statement. Unfortunately, you know, it’s a situation where fewer and fewer people are believing what the governor is saying and that has to be addressed… And I think there’s more information that’s going to come out that’ll just make it harder and harder.

De Blasio and Cuomo have a notoriously bad relationship — a frequent condition for New York governors and New York City mayors. But clearly, de Blasio would be all too happy to see Cuomo vanquished.

But others in the New York City Democratic political arena haven’t hesitated to sound out.

CNN is reporting that

All of which means that the impeachment resolution introduced by Republicans has a real chance of gaining support from a number of Democrats — and passing.

Cuomo, it must be said, has a point about refusing to resign. A resignation in an atmosphere that he doubtless sees as a witch hunt would in fact deny him what every American deserves — due process. And an impeachment trial is nothing if not due process when it is properly executed (as it was not with the Trump impeachments).

How would a Cuomo impeachment work? New York’s WNYT describes the process as follows:

The state impeachment process is similar to impeaching a president. It starts with the introduction of articles of impeachment, which must be voted on by the state Assembly.

If approved in the Assembly, then an impeachment trial would begin in the state Senate. The lieutenant governor, members of the Senate and judges from the Court of Appeals preside.

A conviction requires two-thirds of the state Senate to vote for impeachment, similar to the U.S. Senate.

Make no mistake. Cuomo’s problem is that years of perceived political bullying, combined with now five accusations of sexual harassment and revelations of flat-out lying over his policy that sent thousands of seniors to their deaths in COVID-infected nursing homes, have now caught up to him.

One hit on the sidelines here is the credibility of the liberal media that last year was lionizing Cuomo as COVID-19 hit. The media lefties blithely accepted his word on the state’s COVID policies without a shred of doubt, much less independent investigation. As the Media Research Center’s Brent Bozell said, “The media are complicit in Governor Cuomo’s deceitful cover-up.”

One of the favorite, repeated, and constantly wrong mantras of the media during the Trump era was the prediction that “the walls are closing in on Donald Trump” and that he would be forced to resign or forced out by being convicted in an impeachment trial. It never happened.

But that saying could be seriously accurate about the fate of New York’s governor.

And he knows it.