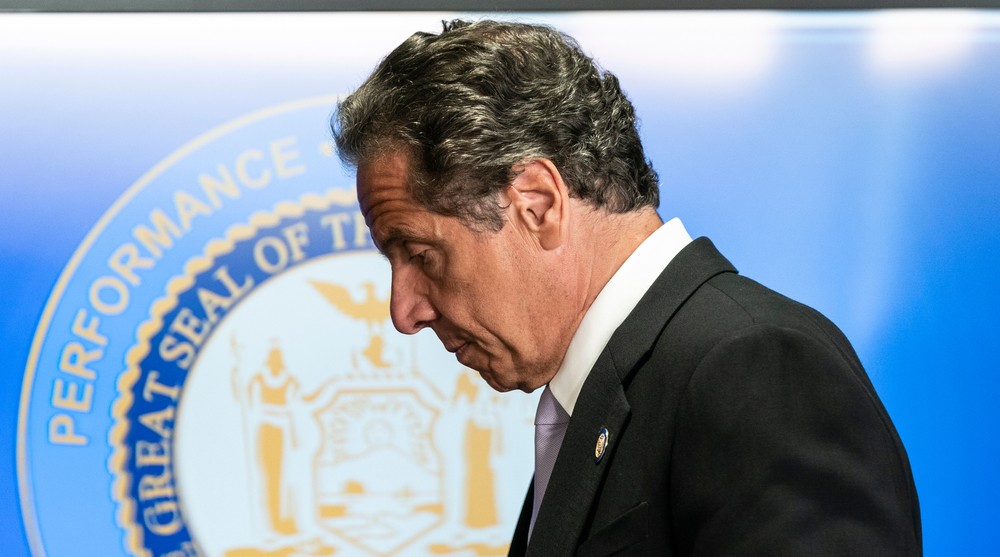 Hugh Carey, the predecessor of Mario Cuomo as governor of New York, famously said “the days of wine and roses are over” before helping to bail out a near-bankrupt New York City and rein in profligate state spending.

Current Gov. Andrew Cuomo, awarded an Emmy, the Cuomosexual hashtag, and a “gold standard” designation from Joe Biden for his coronavirus response during his 2020 acme, perhaps grasps that, for him at least, “the days of wine and roses are over.”

Cuomo, who enjoyed a 77 percent job performance favorability rating last April, now finds himself barely above water at 51 percent. Like Carey, Cuomo oversees a budget in a messy red area (whereas President Biden likely meets his demands for $15 billion federal bailout, Gerald Ford’s press secretary in 1975 rejected such a Big Apple bailout by describing the city’s near bankruptcy as “a self-inflicted act by the people who have been running New York City”). Of greater political salience, scandals involving alleged sexual harassment, bullying, lying, and deadly malfeasance transform a man discussed as a future president to one fighting for his political future.

“Governor Andrew Cuomo has created a culture within his administration where sexual harassment and bullying is so pervasive that it is not only condoned but expected,” former aide Lindsey Boylan, who runs for Manhattan borough president, claims. The married mom says he often touched her lower back, arms, and legs, gave her a rose for Valentine’s Day, suggested they play strip poker together on a flight, and one day kissed her on the lips unexpectedly.

Journalists at CNN, which acted as a media booster for Cuomo in his salad days, went strangely silent for 24 hours, presumably for a green light from their overseers, regarding the #MeToo accusations before John King devoted 39 seconds to the story on Thursday. CNN editor-at-large Chris Cillizza called this “a massively perilous moment in his political career” in a Thursday article detailing the governor’s problems. When one loses the amen corner, one tends to lose faith.

The #MeToo-ish scandal follows numerous reports from New York Democrats that the titular head of their state party routinely threatens, intimidates, and screams at them to get his way.

Allegations from Kim and others stem from the admission from a Cuomo administration figure that it “froze” in not providing accurate numbers of coronavirus deaths of nursing home residents. Rather than provide the full numbers, the administration gave merely the number who died in residential care facilities rather than those who died after arrival in a hospital. The lie means that perhaps double the number of deaths, or more, occurred among those living in care facilities as Cuomo’s administration initially reported.

Given articles here at The American Spectator and elsewhere last spring detailing Cuomo’s policy of readmitting coronavirus-positive residents into nursing homes and allowing coronavirus-positive employees to return to work, the staggering number of deaths from residents of care facilities does not surprise. In the country with the worst coronavirus outcomes, New York ranks second-to-worst in total coronavirus deaths to California and second-to-worst in deaths per capita to New Jersey. Cuomo did a horrible, horrible job. But he runs a very effective press conference that exudes a quiet charisma and a loud competence. So, the press, mesmerized by his handling of the press, whitewashed his mishandling of COVID.

Patterns repeat. Mario Cuomo looked like a shoo-in to win a fourth term in 1994 after appearing to liberals as the next Democratic nominee though never the now nominee. Andrew Cuomo, who gave the Left buyer’s remorse over Joe Biden in the early months of coronavirus and fairly recently generated such headlines as “Andrew Cuomo may be the single most popular politician in America right now,” suddenly morphs from wolf to wounded deer. The fact that he, like his father, faces the voters during a federal midterm election while his party retains power at the national level comes as another handicap. The similar styles of the father and son, both feuding with mayors of New York and others in their party, strike as eerie, and this, perhaps more so than voter fatigue or the bad timing of reelection to a fourth term occurring during a midterm with Democrats controlling Congress and the presidency, makes for a Cuomo in-common undoing.

When a bully gets punched in the eye, the pigeons immediately transform into vultures and start pecking away at their tormentor-turned-tormented. Andrew Cuomo knows this now. His days of wine and roses are over.