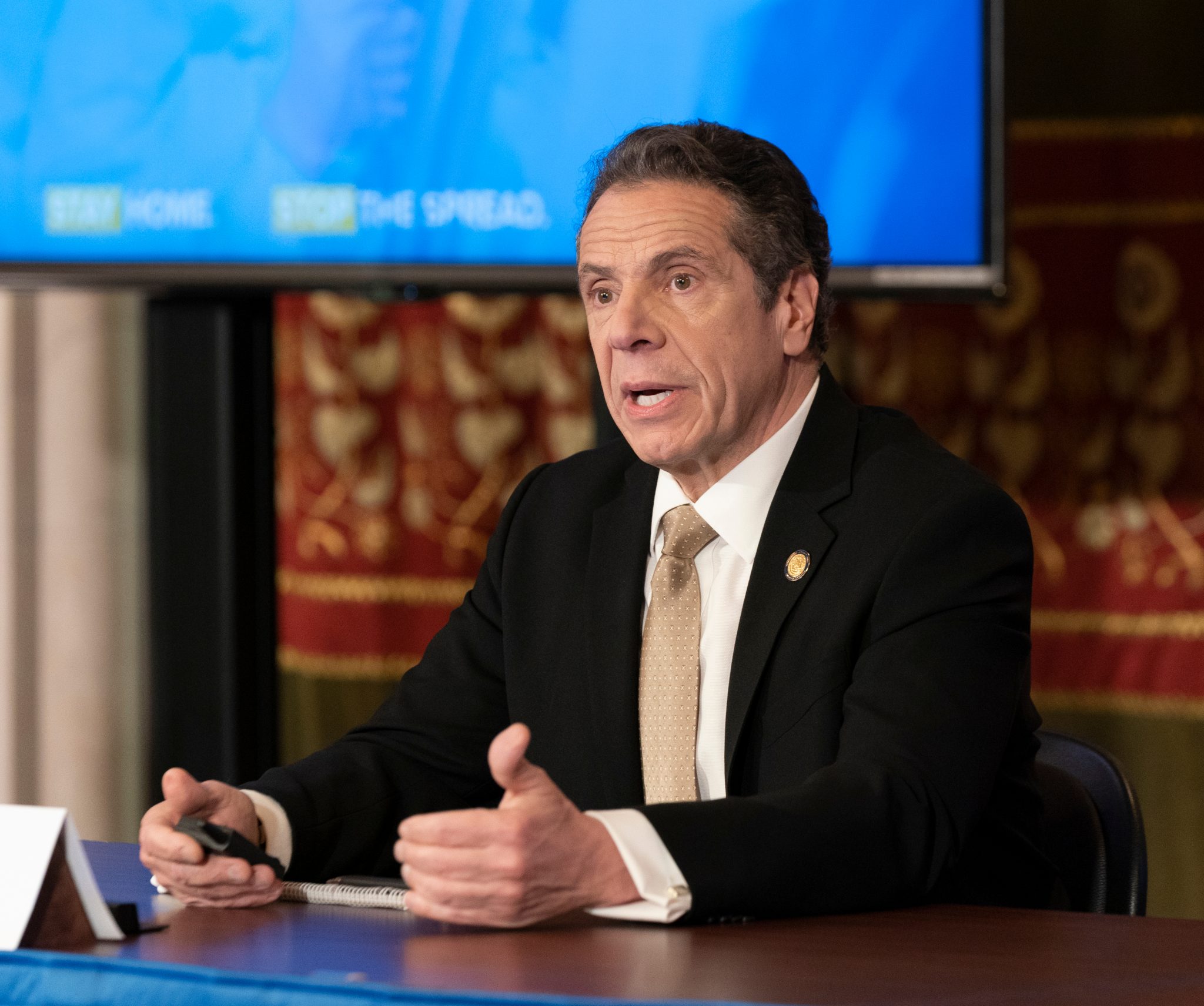 Andrew Cuomo grasps this now. He went from the forgotten man of New York politics — obscured by AOC, a famous real estate developer from Queens, the camera-chasing Senate minority leader whose hairline even lies, and the state’s several failed, delusional presidential candidates — to the most popular officeholder in America by masking impotence, incompetence, indifference, and ignorance with calm, soothing speech.

Robert De Niro picks New York’s governor as the role he prefers to play in any coronavirus movie. “He’s doing what a president should do,” the two-time Academy Award-winner said. A Marie Claire headline asks of the cross between Abe Vigoda and the uglier Menendez brother: “So, Is Andrew Cuomo Single or What?” The term “Cuomosexual” trends on social media. Rolling Stone put Cuomo on its cover, a spot normally reserved for the Jonas Brothers, Ariana Grande, and fictitious fraternity-brother rapists, accompanied by the headline: “Andrew Cuomo Takes Charge.” The National Bobblehead Hall of Fame and Museum even sells a head-bouncing doll of the governor at his familiar press-briefing table for just $25 plus $8 shipping and handling.

The goat merely plays a hero on TV.

“What we’re doing here shows results,” the legacy politician said Wednesday at a coronavirus briefing. It sure does. New York, less than 6 percent of the U.S. population, registers more than 27 percent of all coronavirus deaths. Must we all pretend that Andrew Cuomo does a better job than, say, Florida’s Ron DeSantis, governor of a state with two million more people than New York but less than a tenth of the Empire State’s coronavirus deaths? The success barometer for the media appears not how few the number of coronavirus fatalities in your state but how many the number of freedoms taken away.

By this standard, Cuomo excels. “You want to go to work?” he asked in an April let-them-eat-cake moment. “Go take a job as an essential worker. Do it tomorrow.” He even thanked stunned volunteers from out of state on Tuesday by informing them that they need to pay New York income taxes based on their presence in the state for more than two weeks.

New York boasts 12,000 more coronavirus deaths than any other state in part because Cuomo performed far worse in his duties as governor than he did behind a microphone.

As other states refused admittance of coronavirus-positive patients in nursing homes, state health officials directed New York care facilities to accept them. In a since-reversed policy, the New York Health Department permitted nursing home employees who tested positive for COVID-19 to work provided that they stick to tending to infected residents. After allowing infected nursing home employees to continue working at upstate’s Hornell Gardens, for instance, deaths from the disease quintupled. From the disorganization that left New York City hospitals crammed as the Javits Center and USNS Comfort remained largely empty to the governor’s histrionics about needing more than five times the number of ventilators his state ended up using at the disease’s peak, Cuomo governs as a man who knows not how even as he masterfully convinces otherwise by emitting a fireside-chat vibe in tone and cadence and a sciencey quality in his PowerPoint presentations and insistence that he deals in “facts.” Even his stay-at-home order, which he dubbed “the ultimate step” to curb the disease, and admonitions not to unnecessarily venture outside one’s residence likely proved counterproductive; one study, for instance, notes coronavirus killing those with suppressed vitamin-D levels more easily than those with normal levels.

New York has consequences. As its most famous newspaper reported this week, about two-thirds of coronavirus cases in the United States came by way of the Big Apple. Nathan Grubaugh, a Yale epidemiologist, told the New York Times, “We now have enough data to feel pretty confident that New York was the primary gateway for the rest of the country.”

Certainly, Cuomo could not control the population density of his state’s largest city, the poor sanitary conditions that necessarily entails, its freedom of movement, its climate, and its status as a travel mecca. But by getting so much so wrong he exacerbated a horrible situation. Strangely, the media, of which his brother — so essential a worker that he continued appearing on CNN while infected — remains a member in good standing, depicts him as the Coronavirus Jesus, the savior who delivers us from this evil.

Cuomo became the man of the moment by pushing style over substance. The moment demanded the opposite. Enlightened New Yorkers must shudder when realizing that the dynastic but not dynamic governor, after himself realizing the perverse incentive that makes failure boost the Cuomo family business, looks for an encore after his COVID-19 performance ends.

But dark times demand we look on the bright side. Sure, the man presided over a state with more coronavirus deaths than all but five countries on the face of the Earth. Just admit he holds a killer press conference. And to the press, that’s what really matters.