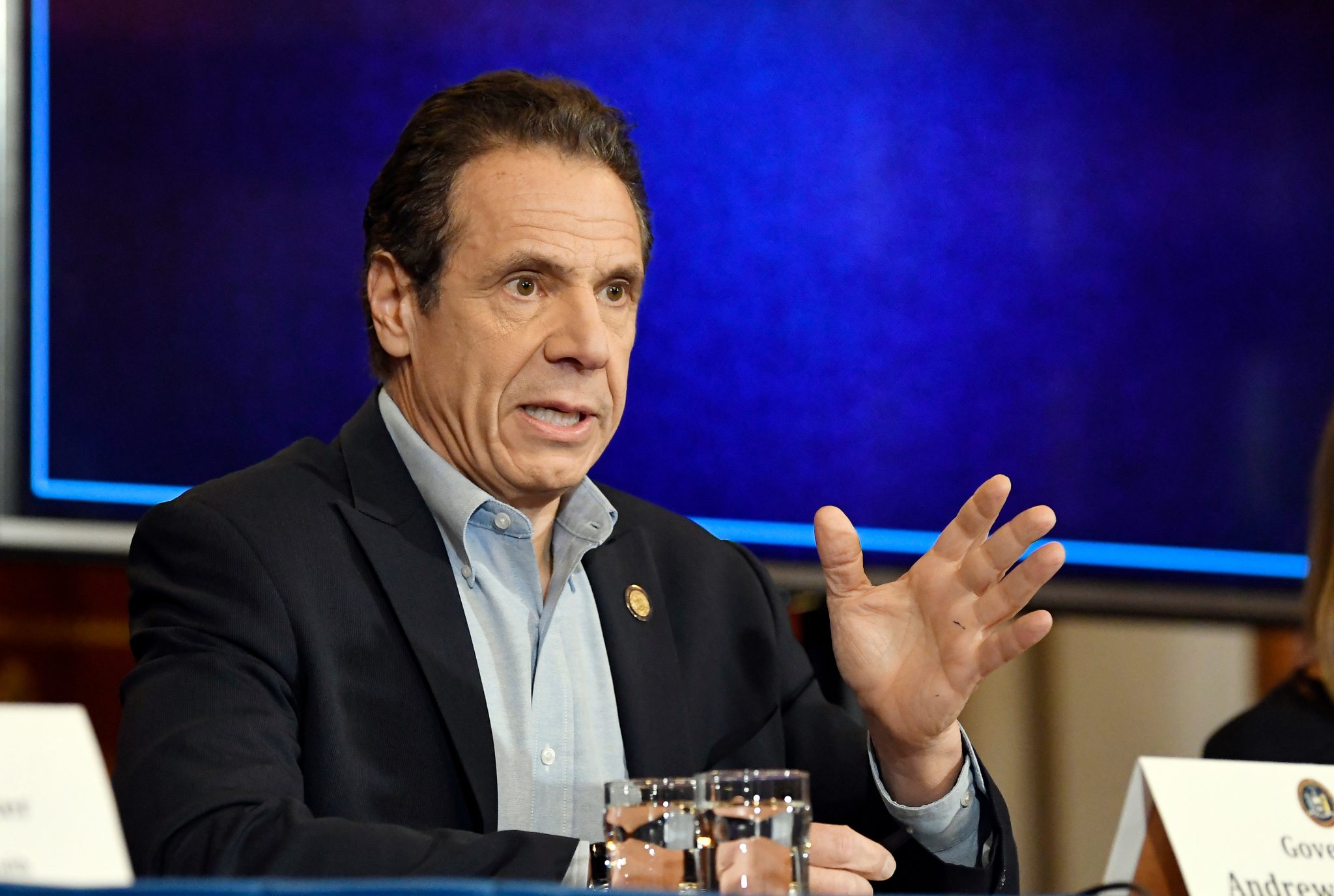 Gov. Andrew Cuomo’s reputation as the tough-love COVID savior of New York, promoted by the liberal media, is utterly collapsing. He is facing calls to resign from the majority of Democrats in New York’s House delegation and around 40 percent of New York’s legislature. Yesterday, Democrats in the state Assembly opened an impeachment inquiry into the governor’s actions. And New York City Mayor Bill de Blasio, Congresswoman Alexandria Ocasio-Cortez, and Chuck Schumer have now called on Cuomo to resign.

This fall from grace comes after six women alleged that Cuomo sexually harassed or inappropriately touched them. A seventh woman alleges he “verbally and mentally abused” her. The allegations include that Cuomo asked a woman if she had sex with older men, kissed an aide on the lips, and touched another aide’s lower back and kissed her on the hand. The sixth allegation, from an unnamed woman, alleges groping and was referred to the Albany police. Dozens of his employees have described the work environment in his office as toxic.

Cuomo, who denies allegations of inappropriate touching, offered an apology for anything he said that might have hurt or offended women: “It was unintentional and I truly and deeply apologize for it. I feel awful about it and frankly, I’m embarrassed by it, and that’s not easy to say.” He has still refused to resign.

It’s truly unfortunate that it took this second scandal of sexual harassment to turn the tide against Cuomo. His first major scandal, forcing COVID-positive patients into the worst possible environment for the disease’s deadly spread — nursing homes — and then fudging the numbers to cover up virus deaths in those facilities, should have been more than enough for Democrats to call for his resignation.

But Democratic lawmakers did not call on Cuomo to resign after it was revealed that his administration purposely concealed the state’s number of nursing home deaths from COVID-19, reducing the number by 50 percent. (That deceit, his aide Melissa DeRosa said, was out of a desire to avoid a federal investigation.) Fourteen Democratic state senators instead called for the repeal of Cuomo’s emergency powers in response to the cover-up. “It is clear that the expanded emergency powers granted to the governor are no longer appropriate,” they wrote. But that was a slap on the wrist.

Only after the repeated allegations of sexual harassment did Democrats find it appropriate to call for Cuomo’s resignation, which they say is necessary because of both the sexual misconduct allegations and the nursing home cover-up.

Democratic lawmakers should have denounced Cuomo and forced him to change course in March 2020 after he ordered nursing homes, where COVID was running rampant and killing people in hugely disproportionate numbers, to admit COVID-positive patients. Instead, Cuomo continued the potentially deadly policy for 47 days, from March 25 to May 10. 15,430 nursing home residents in New York have now died from COVID-19, more than any other state.

A few Democratic lawmakers, however, did break the mold and speak out against Cuomo’s nursing home policy when it was in effect. Jonathan G. Jacobson and Ron Kim, members of the New York Assembly, were two of the Democratic politicians willing to do so, but they received stiff pushback. When Kim later critiqued the government’s cover-up of nursing home deaths, Kim says that Cuomo yelled at him and threatened to “destroy” his reputation, demanding that he issue a new statement.

But while Kim and Jacobson spoke out against the nursing home policy, the vast majority of Democrats remained supportive of Cuomo and his nursing home policy during its 47-day existence, reinforcing his reputation among Democrats as the most adept politician at battling COVID. The media continued to promote him, and he received an Emmy for his “masterful” COVID briefings.

With little Democratic resistance, Cuomo kept the infamous nursing home mandate in place for over a month and a half, despite steady condemnations of the policy from experts and industry groups.

“Whoever made this decision, whoever did this, I consider this a sentence of death for all the older patients, whoever is in a nursing home,” said Mina Ebrahem, a physical therapist in New York, on Cuomo’s nursing home policy in April 2020.

Both the New York State Health Facilities Association and the Society for Post-Acute and Long-Term Care Medicine opposed the policy.

Republicans voraciously denounced Cuomo’s nursing home policy at the time, with Republicans in the New York state Senate arguing the policy “imported the virus into places that house New York’s most vulnerable” and calling for an independent investigation.

Cuomo responded to those Republican accusations in his usual harsh and aggressive political style. His spokesman characterized the Republican Senate response as “a sick and sad attempt to politicize this pandemic using a policy that is consistent with the current Republican federal administration.”

And while this was all going on, Cuomo was writing a self-aggrandizing book, American Crisis: Leadership Lessons from the COVID-19 Pandemic, to prop up his COVID leadership. In his book, Cuomo expresses no regret about his nursing home policy, saying that it was based on a fear that hospitals would collapse — a fear that never materialized.

In his book, Cuomo calls attacks on his nursing home policy “an orchestrated strategy and a Fox News drumbeat,” and refers to an April 2020 column published in the New York Post criticizing the policy as “truly despicable.”

Cuomo defends the policy in his book on the basis that New York was 46th in the nation when it came to the percentage of COVID deaths that occurred among nursing home residents. This was of course a lie, as this number purposely excluded 50 percent of deaths.

In June, as Cuomo was beginning American Crisis, his aides rewrote a report on COVID-19 among nursing home residents that was put together by the consulting firm McKinsey and the state’s health department.

Upon seeing how high the number of deaths was among nursing home residents — 9,250 at the time, the highest of any state — his aides concealed the true number of victims by erasing deaths that occurred in a hospital rather than a nursing home.

Melissa DeRosa, Cuomo’s top aide, told lawmakers in a private phone call that she was afraid the true numbers would “be used against us” or lead to a federal investigation.

In fact, the Department of Justice did launch an investigation into the matter, which Cuomo’s administration characterized as politically motivated. According to the Associated Press, New York officials were slow to provide the DOJ with information they requested.

In a news conference following the revelation from the state attorney general that his administration had not reported nursing home deaths appropriately, Cuomo pushed aside the issue as irrelevant: “Who cares [if they] died in the hospital, died in a nursing home? They died.”

Cuomo continually pointed to the nursing home situation in Florida to avoid fault for deaths in New York. But Florida currently has 4,717 fewer nursing home deaths than New York in a state with a population greater than New York by more than two million people, a greater proportion of whom are elderly.

New York Democratic lawmakers are now calling for Cuomo to resign on the basis of both the sexual harassment claims and the nursing home deaths cover-up.

“In light of the Governor’s admission of inappropriate behavior and the findings of altered data on nursing home COVID-19 deaths he has lost the confidence of the public and the state legislature, rendering him ineffective in this time of most urgent need,” wrote 59 Democratic New York state legislators.

But covering up thousands of deaths that could be a result of his own malfeasance should have been enough.