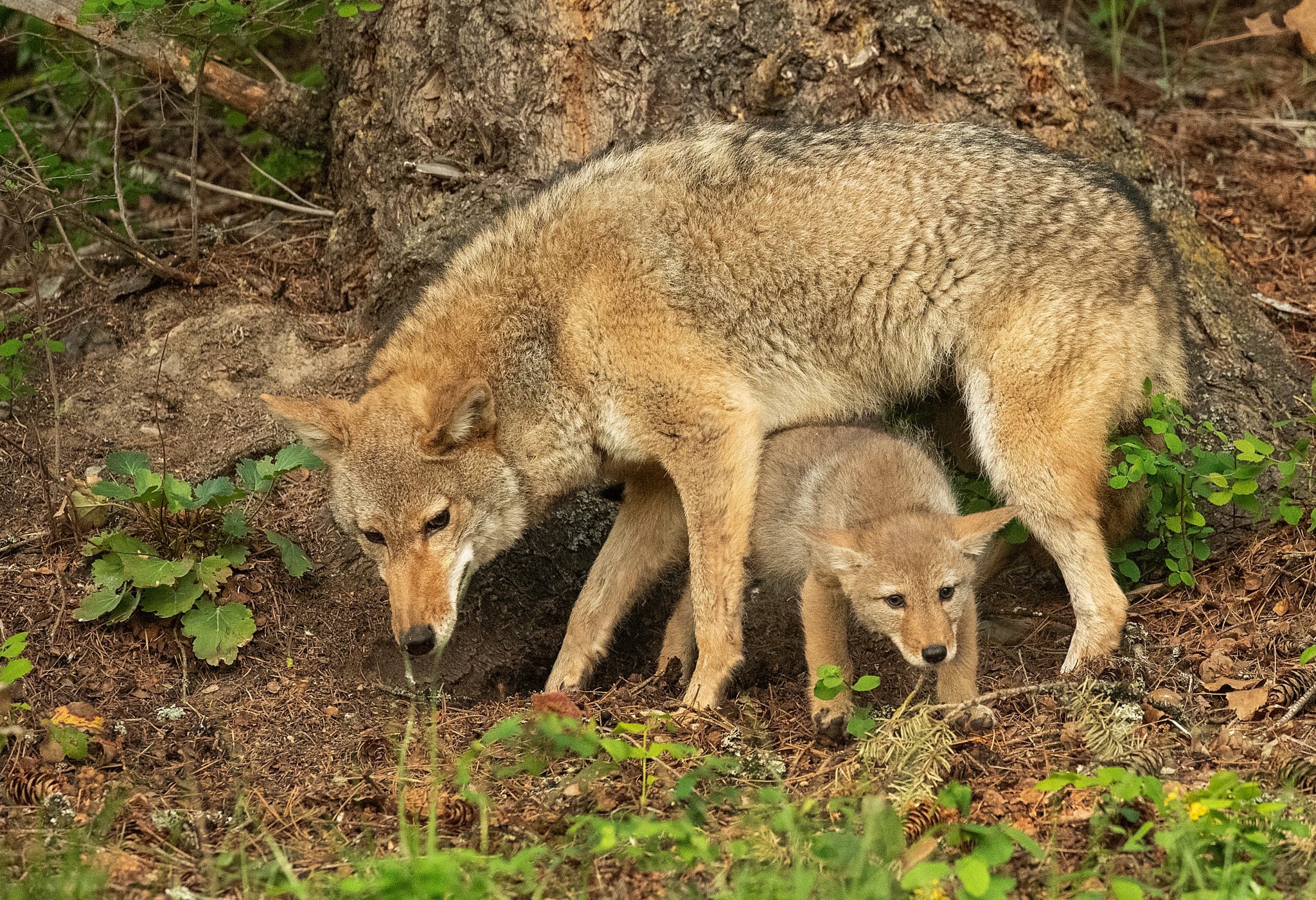 We have a coyote problem here on my daughter’s farm. They come every night looking for easy prey, which qualifies as no surprise. They are predators, after all. And while there are squirrels and mice and chipmunks and turkeys in the woods beyond the perimeter of the farm, those creatures are wild enough to be alert. So hunting them down is hard work, costing a coyote as much in energy as the carcass would provide in calories. My daughter’s plump chickens, on the other hand, are pushovers and a fine source of protein.

We could shoot the coyotes and it would be perfectly legal. The government kills coyotes and doesn’t seem to worry about competition from the private sector. There will never be a shortage of coyotes. A government campaign that employed air power and chemical warfare in the form of carcasses baited with cyanide failed, over the years, in its initial goal of eradication. The coyote did not merely survive; its range expanded.

The coyote had once been a creature of the plains. Where nobody on the Lewis and Clark expedition had ever seen one back home, east of the Mississippi, there are now coyotes in every state of the union and this includes some urban populations. There are coyotes living in Manhattan. And Los Angeles. They must, one thinks, be desperate.

I actually woke up one night on the North Carolina coast to the sound of a coyote howling outside my window. I was less than a quarter of a mile from the Atlantic Ocean. Weird, I thought, and wondered if coyotes eat oysters.

It makes sense for them to be in Vermont, where my daughter has her farm. When she was a little girl and we lived in a small, nearby town, we would listen to the coyotes howling at night from the hillside a mile away. She loved the sound.

Still … they were coyotes and she understood that we were living in the real world, not a Road Runner cartoon. Coyotes killed things, including, possibly, a cat of hers that had gone missing. We knew several people in town who had lost pets and blamed coyotes. It was a safe assumption, and in some cases, there was the evidence of a partially devoured carcass.

Coyotes need to eat, too. My daughter understood that. Even though she missed her cat.

We would catch sight of a coyote now and then, looking purposeful and lethal. Though not so lethal as a wolf. If the coyote was on the move, its gait would be a steady lope and the course would be a straight line. None of that weaving around that you would see in a domesticated dog. And when a coyote was stationary, it was exceedingly alert and still. Testing the wind for opportunity. Or danger. There is a reason the coyote has survived – indeed, thrived– despite the best efforts of humans and their governments.

I had several opportunities to shoot a coyote. There was a time when I looked up from my desk and saw one in the meadow behind the house. It was big and its pelt was strikingly ginger-colored. That coyote was a handsome animal, and I didn’t like the idea of killing it, even if it meant my daughter’s new pet cat might be marginally safer when it went out at night.

And besides, if I killed that one, another would be along to make the meadow a part of its territory. As the government experience proved, coyotes cannot be eradicated. In the old American West, predator pressure took the form of wolves. The government’s success in killing wolves to near-extinction meant more coyotes over a greater range. The government still kills 500,000 coyotes every year. And yet they are everywhere.

They are an evolutionary masterpiece. Coyote litters vary in size according to the amount of suitable habitat and the pressure of … predators. Kill more and their litter size increases from the normal five or six pups to as many as a dozen or more. When coyotes howl at night and there are no answering calls, this is a signal that it is time for larger litters and new packs that will be formed as animals break off and move out to occupy the open territory.

So coyotes adapt and they survive, though they are hunted down everywhere. There is no hunting season for coyotes here in Vermont. They can be “taken” legally any time of year and by rifle, shotgun, or bow and arrow. The Vermont Legislature did recently pass legislation that outlaws coyote hunting competitions. This is, no doubt, more a matter aesthetics than of wildlife conservation. The coyotes are just as dead whether they have been killed for points on a scoreboard or by a solitary hunter out of the old, old impulse to defend himself and his herd against predators and, in some sense, to establish that he is the dominant species in his territory.

But we don’t need any of that on my daughter’s farm. We have Max.

My daughter bought him as a pup, the morning after the slaughter of her ducks. It might have started out as an exercise in killing for food, but it quickly tipped over into pure bloodlust. The coyote left most of the carcasses where they lay.

So Max, a six-month-old Great Pyrenees, was brought into the family. He already weighed more than 100 pounds, with a full white coat and a bark that would stop traffic and, certainly, scare off any predator, night or day. He immediately became running buddies with Randy, the Jack Russell, who is about as big as one of Max’s paws. He also warmed immediately to my daughter’s three children. It was a couple of weeks before he would come close enough for me to rub his ears.

Max is actually timid, but try telling that to the coyotes (and foxes) who hear his formidable barking when they come near the perimeter of the farm.

During the recent shutdown, photographs appeared in the media of coyotes strolling down empty city streets. One suspects that when things are back to normal — or as close as they ever will be — there won’t be coyotes on the streets of San Francisco and Detroit.

But they will be around. Some creatures just cannot be eradicated. They adapt and we cope.