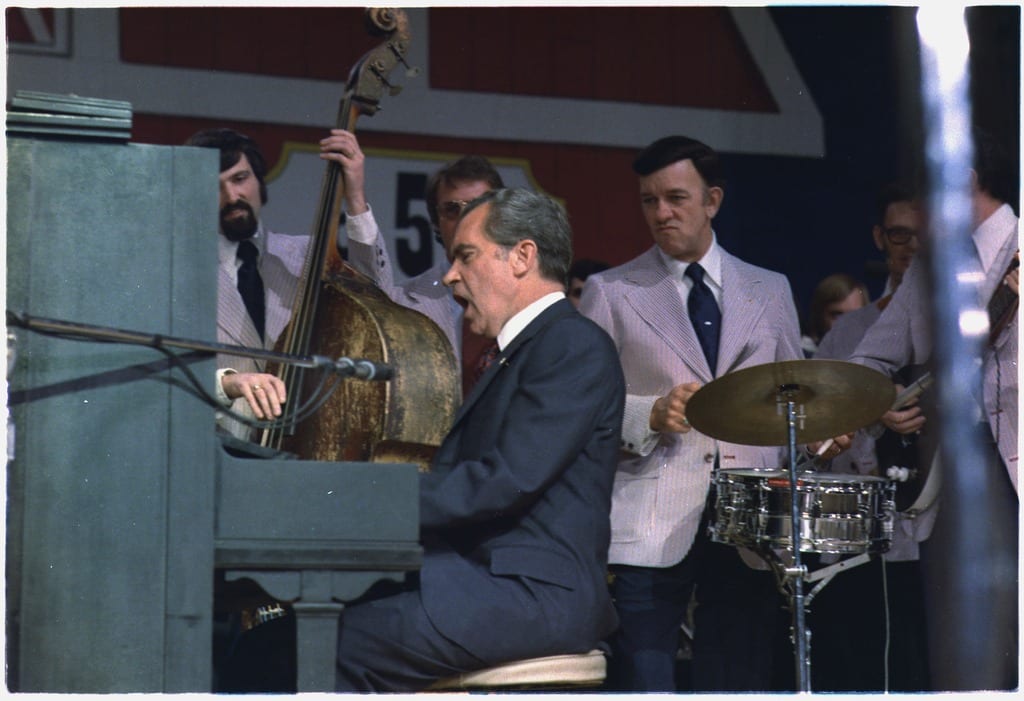 Okay, lots to say. Last night Tommy, my handsome son, our handsome son, appeared at our home after a grueling trip from Greenville, South Carolina, with his friend, Bri.

I was in bed with my beautiful wifey watching my 16-hour documentary about country music by the genius documentarist Ken Burns. I was watching specifically about Merle Haggard when Tommy appeared and I started to sob. Not just sniffle or whimper but sob. Yes, because he looked so grown-up and sturdy and like a full-grown man.

“That’s my son,” I said to wifey. I used to be able to carry him around with one hand while I cleaned the leaves from our pool decking with a hose with the other. I used to buy him the whole store of Toys “R” Us. Now, he’s been through hell. He has an extreme aversion to work. He smokes cigarettes. But he’s as sweet as a man can be. He is my son, and he looks like a man. He acts like a man. He has a sense of humor. He plays keyboards. After a difficult marriage and divorce, he has a fine girlfriend. They’re happy together.

His daughter, CoCo, from his first marriage, is happy and charming. He makes me proud of him, and I sob at how much time has passed. I was 42 when he came into our lives. In two days I’ll be 75. I just never would have believed I would live this long. Long enough to see my son come strolling into my room looking and sounding like a man.

What does that mean? It means he looks solid. I don’t think he’s a bad boy any longer. He drinks the occasional mixed drink and smokes cigarettes. But he’s solid. If I were in a bar fight, he’s the first man I would want in my corner.

So, I cried like a big baby. He sat there talking about how poor the food service on the plane was and I kept crying. Too much time has passed. Too little is left. I watched Merle Haggard singing and I kept crying.

I find that as time passes, I cry more and more easily. Just for example, on TV, on this perfect documentary I am watching, there are scenes of Mr. Nixon playing piano at the Grand Ole Opry stage the night it closed. (To move to larger quarters.) I was with Mr. Nixon on that trip, and Mr. Nixon looked so happy in those pictures that I cried. He should never have been booted out of office. Never. (Now here’s a point that should be written in flaming gold letters.) Nixon was a saint.

Anyway, Tommy only stayed a few minutes, and then he left by Uber to go back to the apartment we keep for guests at the Shoreham Towers.

I’ve become obsessed with country music lately. Just obsessed. Why? Judah, my brilliant pal, a real genius, says it’s because it puts me in touch with a certain stratum of the American population that I like and that likes me. When I go to Bob’s Big Boy, everyone there says “How-Dee” just as if they were all Minnie Pearl from the Opry itself. I am sure my sister has an opinion about this, and I’ll have to ask her.

Anyway, lately I have been watching a lot of TV, and I have reached what I think is an interesting conclusion: TV is an alternative view of America, quite different from the real America in many ways. For one thing, it’s far more racially mixed. On TV, in ads and in shows, almost everyone has black pals if he’s white or white pals if he’s black. The same with Asian Americans and Hispanics. In real life, there is certainly much more diversity than there used to be, and that’s a good thing, but we are very far from being a racially diverse society. TV is selling us an idealized America, race-wise.

TV also sells us an idealized USA in terms of prosperity. Hardly anyone on TV lacks a home, and a comfortably decorated, lavishly furnished home is standard even for policemen or firemen (firefighters, of course, police personnel, of course). Everyone has a new car wherever he or she might live. And when people work, they usually work in clean, tidy venues, not the pigsties that so many Americans really work in.

America on TV is a lovely place. Don’t get me wrong. America in real life is wonderful, too. Just great. But it ain’t the plantation at 12 Oaks like it’s shown to be in Gone With the Wind and on many TV shows.

I have the feeling that this is about the exalted lives the people who make TV live. But I should probably investigate this a bit more.

Then there’s the subject of dogs. On TV, the canine has replaced the child or the human lover as the primary recipient of human affection. If a man or woman is happy, you see it in the eyes of his or her dog. Dogs are everywhere, soaking up love that in an earlier era would have automatically gone to other humans. The human on TV has given up his claim to be loved just because he eats on a tablecloth off dishes. Now, eating on the floor is more or less de rigueur for those whom we truly adore — namely, our dogs.

Hmmm. America the diverse, the rich, the pet-loving paradise. There’s something going on there. America as it is compared with the fake-news America — that’s something to conjure with. But the fake-news America is really a great place, and many of us live in it for several hours per day. And why not? It’s a wonderful life, and it’s free. It’s like listening to the Grand Ole Opry was for sharecroppers in Mississippi long ago: a fantasy world that’s a lot of fun.

Now I’m going off to have dinner with my son and probably cry a lot.