CLEVELAND — “There will be no peace unless there is justice,” Professor Cornell West said Tuesday in a speech to an anti-police rally here organized by the Revolutionary Communist Party (RCP). Speaking through a megaphone amid a crowd of protesters gathered at Public Square in downtown Cleveland, West invoked “the legacy of white supremacy in this country that goes back 400 years” to condemn police.

West spoke in front of a giant RCP banner declaring, “Time to Get Organized for an ACTUAL Revolution. STOP MURDER BY POLICE.” Activists with the RCP held aloft signs that read, “America Was NEVER Great! We Need to OVERTHROW This System!” 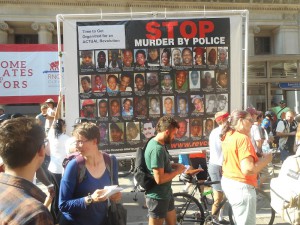 The Revolutionary Communist Party is a Maoist splinter group that emerged from the radical debris of the 1960s New Left. The RCP’s critics have called the group a cult. At their website, RCP on Monday called for “A Week of Powerful Struggle — That Must Be Built Toward Revolution.”

Tuesday’s rally in a Cleveland park, just blocks from the arena where the Republican National Convention is meeting, was followed by a march down Euclid Avenue where about 150 protesters chanted: “Arrest, convict and put killer cops in jail! The whole damned system is guilty as hell!” They brandished signs with slogans like, “No allegiance to white supremacy” and “The Trump campaign is a crime against the mind.” 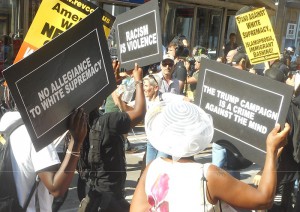