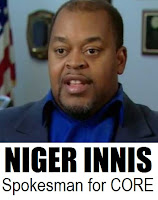 “Black Americans in the 1960s were fighting for their humanity,” said Niger Innis, spokesman for the Congress of Racial Equality (CORE). “Public-employee unions today are fighting for better privileges and benefits than the average American worker has.”

At a union rally last week in Baltimore, Trumka declared, “Madison is just the beginning!” — a reference to massive AFL-CIO-led protests against a Republican-backed law to limit collective-bargaining rights of Wisconsin state and local government employees. As reported by Byron York of the Washington Examiner, Trumka announced nationwide union rallies for April 4, the 43rd anniversary of MLK’s assassination in Memphis. On its Web site, the AFL-CIO invited protesters “to stand in solidarity with working people in Wisconsin, Ohio, Indiana and dozens of other states where well-funded, right-wing corporate politicians are trying to take away the rights Dr. King gave his life for.”

In an interview Monday with The American Spectator, Innis rejected Trumka’s attempt to co-opt the civil-rights legacy for political purposes.

“Trumka’s comparison of the union battles in the Midwest and across the country to Martin Luther King and all of black America’s struggle for equality is absurd,” Innis said. “I’m not casting aspersions on the union movement. I’m just asserting that Trumka’s comparisons are distorted and insulting.”

Innis said that the AFL-CIO president “unfortunately is following a recent phenomenon of what I call the prostitution of a people’s pain.” He said Trumka is “mimicking radical environmentalists, the gay rights movement and the animal rights movement” which also invoke comparisons between their causes and the “four-century-old struggle of African-Americans.”