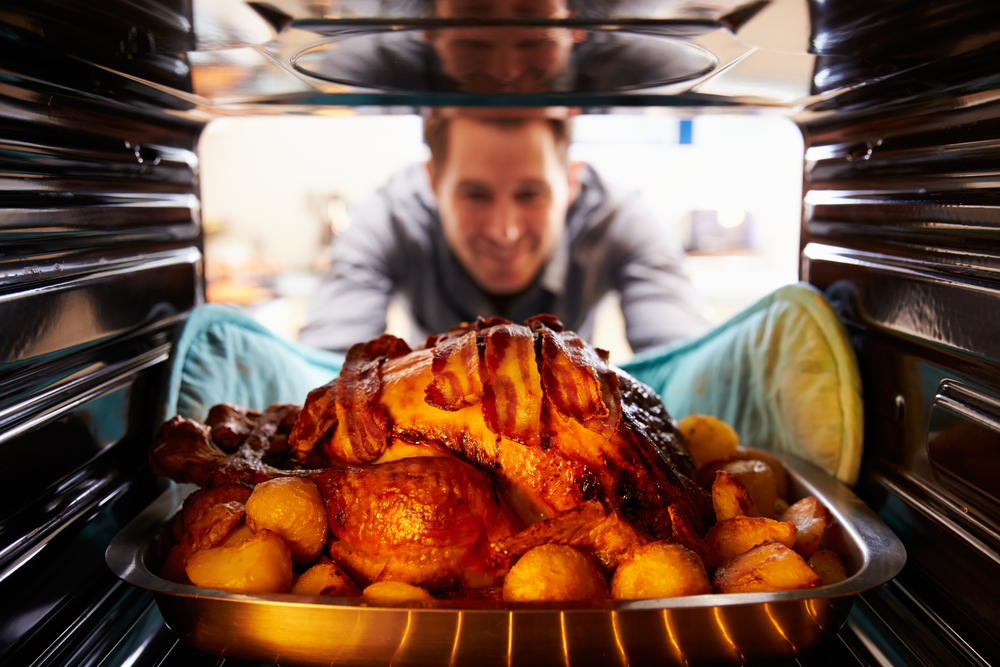 Tomorrow is Thanksgiving and, in addition to giving thanks, you have to cook. This year it’s your turn, and you haven’t found a way to get out of it. Don’t worry; I know how to do it. I know how to teach you how to cook badly enough for someone else to want to do it for you.

Let’s see. You need a turkey. This probably doesn’t come as a surprise. You need a turkey right now. I think Chocolate and Chip have been pardoned by Biden. I’m guessing they’ll come up for sale on eBay shortly. Once you’ve gotten hold of it, it’s best to let it know what’s going down. Never yell at a turkey. Crouch down, speak softly, look it in the eye, try to show empathy, and flap your wings from time to time. You don’t need to be too blunt about what is going to happen. Try subtle hints: “Your future is bleaker than the state of inflation in the U.S., my boy.”

We will try to make more or less roast turkey. Smart cooking offers many options as to where this dish may be perpetrated. The most recommended place would be the oven, if possible. If the turkey is too big you can try to cook it in the dishwasher, setting it to maximum temperature and spraying the inside with a couple of liters of olive oil, pepper, salt, and the like. Besides being tasty, it will also come out clean. And this is a good thing, because the turkey is a dirty animal by nature.

Once the turkey is in the oven, pour yourself a beer. That makes the whole family think you’re relaxed and have everything under control.

Another option is to cut the turkey up into pieces before cooking it. The awkward thing about this is that it tends to run away when it sees you with a machete, so you’ll need help keeping it still. Turkeys are discerning creatures. And when they see you around the house with a machete, they know you’re not going to take on the TV or chop up the front porch furniture. They know they are the target. In my opinion, you should always straight up deny any accusations made by the turkey. Lying is an ugly sin, but the Scriptures don’t say a word about lying to irrational beings (which is why you can also lie to the entire government, including the IRS).

As for grilling, this is an important concept in modern cooking. In the past, everything was called grilling. Now they have invented 200 nuances to drive amateur cooks crazy, and there are a thousand ways to get a piece of dead meat to become food, through a surface that emits fire, or electric heat, or very strange waves that heat everything they touch, better known as SW (Sharapova Waves).

The purpose of roasting something is to make it crispy. It should go from raw to done. The big problem here is that although it’s very easy to know when a turkey is fresh (when it’s running around the farm), it’s not so easy to know when it’s done. All you can be certain of is that once you’ve roasted it, it will be done. And to achieve the desired transformation it is important you roast it.

Much of the success of the roasting process is in the confidence and poise the cook’s expression shows when dishing up the feast. Show no mercy to whiners. Opening fire at point-blank range on the first idiot who insinuates that the turkey is undercooked will dispel any doubts about your excellent culinary skills. It may also cause a collateral heart attack if your lawyer is among the diners. But cooks are eccentric types to whom all is forgiven in the end. At least the cooks of yesteryear. The ones on TV nowadays are just plain weird: what on Earth can you expect one of those skinny modern cooks to teach you? How to boil broccoli?

Incidentally, before throwing the turkey in the oven I suggest you drown it in a pool of oil, and also, prior to killing it, get it to eat three kilos of apples, but I have no idea how to do that, unless you get it drunk, which is what I do. The advantage to a drunken turkey is that you don’t have to kill it: it walks into the oven of its own accord, shaking its tail feathers and singing Sinatra songs. Once the turkey is in the oven, pour yourself a beer. That makes the whole family think you’re relaxed and have everything under control, even though it’s obvious you’ve got an oil-soaked turkey suffering apple indigestion pounding on the oven door and three hours to go for Thanksgiving dinner.

In the meantime, you’ll need two legs and $20 to make your lingonberry jam. That and an open corner shop. Making the jam is easy: unseal it, open the lid, pour it into a bowl, and throw away the original jar to get rid of evidence.

I time everything I cook by the time it takes to cook an egg. So if you want to know when the turkey will be ready, you have to cook 12 eggs. Once they are cooked, give them to the turkey. Turn off the oven and try to serve the dish with the lights off to generate more excitement. If the smell of burnt feathers is unbearable, you can suggest that the family thank God for not allowing Dad to cook next year. And if it’s tasty, don’t get cocky and thank God all the same: have you ever heard of fool’s luck?

Turkey or no turkey: happy and smiley Thanksgiving, folks.

Itxu Díaz
Follow Their Stories:
View More
Itxu Díaz is a Spanish journalist, political satirist, and author. He has written 10 books on topics as diverse as politics, music, and smart appliances. He is a contributor to The Daily Beast, The Daily Caller, National Review, American Conservative, and Diario Las Américas in the United States, as well as a columnist at several Spanish magazines and newspapers. He was also an adviser to the Ministry for Education, Culture, and Sports in Spain.
Most Popular
1
The Current Crisis
Shocker: Americans Think Democrats Are ‘Strange’
by R. Emmett Tyrrell, Jr.