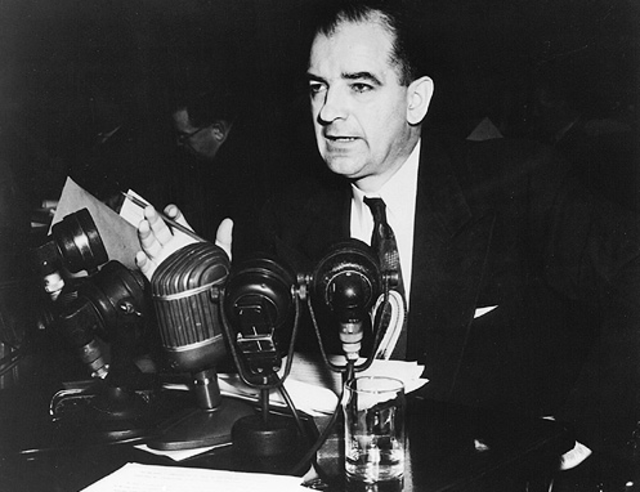 Two recent op-ed articles in the Washington Times and their accompanying illustrations manifest a troubling habit of modern conservatives — all too often, they accept and help promote the conventional liberal version of history in a futile effort to lend respectability to their views. In doing so, some modern conservatives unwittingly cede the moral high ground to their philosophical opponents while simultaneously adding their imprimatur to conventional liberal historical “truths.”

In the Aug. 9 issue of the Washington Times, D.C. lawyer Gerard Leval rightly warned against “the fervor of those who vociferously seek to purge anyone and anything which is not in keeping with the new morality.” Leval condemned the efforts of the philosophical Left to erase from history “many of the pillars of Western society.” He decried the “current intolerance” of those who would try to “purge our society of so much of our past.” It is, he explains, an example of modern-day “McCarthyism.”

Indeed, most of Leval’s article is a mindless recitation of the conventional liberal view of Sen. Joe McCarthy, who he claims presided over “one of the worst episodes in [our] history.” McCarthy, he writes, was guilty of “wide-spread and unsubstantiated accusations” of communist infiltration into our government and society. “Cascading fear and a belief that America was being betrayed by domestic spies deeply embedded in our society,” he wrote, “accelerated the paranoia and hysteria.” He mentions that writers, actors, and others in Hollywood suffered from “employment termination, social ostracism and worse” at McCarthy’s hands — yet the Hollywood Ten appeared before the House Un-American Activities Committee in 1947, not before the Senate Committee on which McCarthy served. And McCarthy’s investigations of domestic communism began three years later, in 1950.

Leval then heaps praise on playwright Arthur Miller, who wrote The Crucible about the Salem witch trials as a warning that McCarthy was engendering fear by “rumors that communists had infiltrated the United States.” There are two problems with Leval’s history here. First, Arthur Miller admitted to helping communist front groups and was for a time a dedicated communist who wrote for the communist New Masses in the mid-1940s under a false name to hide his association. Second, communists had infiltrated the United States, including at the highest levels of government in the Roosevelt and Truman administrations. Leval merely had to read some non-liberal books to learn the truth about this: M. Stanton Evans’ Blacklisted by History, Diana West’s American Betrayal, Whittaker Chambers’ Witness, the many books on Venona (intercepts from the U.S. Army Signals Intelligence Service that revealed the extensive nature of communist infiltration of our government), or James Burnham’s The Web of Subversion. Perhaps Leval doesn’t know that Assistant Treasury Secretary Harry Dexter White was a Soviet agent of influence, Assistant Secretary of State Alger Hiss was a Soviet spy, or White House staffer Lauchlin Currie aided the Soviets and Chinese communists. Perhaps, like Arthur Miller, Leval believes the Rosenbergs were innocent of providing atomic bomb secrets to Stalin.

Leval and the editors of the Washington Times (who included with Leval’s piece an illustration of dead bodies hanging against the backdrop of McCarthy’s face) could have learned this by reading the liberal Washington Post, where in 1996 Nicholas von Hoffman wrote that the “essential truth that the left end of the American political spectrum has evaded” is that McCarthy was “closer to the truth than those who ridiculed him.”

Two days later, the same Washington Times published a piece by conservative activist David Bossie on the raid at former President Donald Trump’s Florida home in which Bossie criticized what he called the Biden administration’s misuse of law enforcement.

To drive his point home, Bossie compares the raid and other anti-Trump actions such as the Russia collusion hoax to President Richard Nixon’s alleged misdeeds during Watergate (Bossie’s piece is accompanied by an illustration of the profiles of Biden and Nixon side by side). Bossie, it appears, adheres to the conventional liberal Woodward–Bernstein storyline of Watergate about the evil Nixon, the “non-partisan” Senate Watergate Committee, the courageous FBI agent Mark Felt, and a heroic press that “saved” the country from Nixon’s crimes. This is a storyline that has been eviscerated by British historian Paul Johnson and authors Geoff Shepard, Jim Hougan, and Len Colodny, if Bossie would care to read their books.

And why did Bossie feel the need to use Nixon as his “abuse of authority” example when he could have just as easily used Franklin Roosevelt or John Kennedy or Lyndon Johnson or Bill Clinton or Barack Obama — all of whom used the coercive powers of the government to target their political enemies.

There are, of course, other examples of historical “truths” that conservatives need to challenge again and again: the “greatness” of Presidents Franklin Roosevelt, Harry Truman, and John F. Kennedy; the rightness of Truman’s firing of Gen. Douglas MacArthur during the Korean War; the notion that the communist conquest of China in 1949 was inevitable; the idea that the Democratic Party is the historical champion of civil rights; and giving more credit to Mikhail Gorbachev than Ronald Reagan for America’s victory in the Cold War.

The Washington Times has been a beacon of truth in a city where the media aligns closely with the political Left. It does conservatives and conservatism no favor by publishing pieces that reinforce the liberal version of history that is embraced by most media outlets, our educational establishments, and our cultural institutions.