Terrorism is a form of propaganda, a political weapon that can be used to instill fear, horror and indignation, to destroy and sap out the will of the people. Through fear and terror one can demand obedience and blind submission…. Terror is a political weapon, and its purpose will force capitulation.
— Adolf Hitler,
Mein Kampf

The first step in dismantling and defeating any criminal or terrorist organization is to identify its participants. In the early 1970s, when the U.S. Justice Department’s Organized Crime and Racketeering Section ramped up operations against what we used to call “La Cosa Nostra” (LCN), we worked closely with the FBI, Secret Service, ATF, IRS, and, in many instances, local and state police to identify the members of the various Mafia families in cities throughout the country. Once our targets were identified, we used confidential informants, physical surveillances, search warrants, electronic surveillance, and grand juries to assemble information about them, which intelligence analysts then indexed and cross-referenced. We wanted to know more about them than they knew about themselves, with the ultimate goal of rolling them up wholesale. It took a while, but, to a great extent, it worked.

I had the privilege of working with many talented, intelligent, and street-smart investigators. One of them was an FBI agent who had spent 18 years doing counterintelligence in New York City against the GRU (Soviet Military Intelligence). When he began working LCN cases, he marveled at how disorganized, amateurish, and just plain dumb the mob guys were. He considered LCN to be “easy meat,” and, compared to his old Soviet adversaries, he was right.

As in places such as Portland and Seattle, the rioters had nothing to fear here in the City of Brotherly Love, until, that is, the federal government stepped up to do the job that the locals had refused to do.

The main reason the mob guys were such low-hanging fruit was that, until federal law enforcement started after them, they had had no real opposition. They had been accustomed to running their criminal enterprises in cities where underfunded and understaffed police and prosecutors had neither the resources nor the organizational will to deal with them. This had led LCN to become sloppy, and, despite their code of omertà and prolific use of violence, they left many openings and weak points that we could and did exploit.

Which brings us to the antics of Antifa’s play thugs and the shakedown artists of Black Lives Matter who have set up shop in welcoming progressive Democrat-run cities across the country. For almost two months we have been treated to the spectacle of these pretend storm troopers spouting neo-Marxist gibberish as they run riot without any serious pushback by the local authorities.

For example, during the recent riots here in the People’s Republic of Philadelphia, Mayor Jim Kenney and District Attorney Larry Krasner (D-Soros) undercut the efforts of the Philadelphia police to restore order even as rampaging “peaceful demonstrators” looted and destroyed large swaths of the city. Instead of effectively deploying Philadelphia’s 9,000-plus police officers to aggressively confront the rioters, Philadelphia officialdom — with the active approval and encouragement of local media — opted for a kid-glove response. In this regard, with great public fanfare, Mayor Kenney rescinded police citations issued to 756 “protestors” for disorderly conduct, violating curfew, and failure to disperse.

And those arrested for more serious crimes now face prosecution by the once-formidable but now ridiculous District Attorney’s Office under the leadership of Larry Krasner. Before he became District Attorney, Krasner sued the Philadelphia Police Department over 75 times for civil rights violations. He was elected with the substantial financial backing of billionaire George Soros. Since taking office, Krasner has earned the admiration and goodwill of Philadelphia’s ordinary, run-of-the-mill, criminals who have affectionately dubbed him “Uncle Larry,” as in “Go ahead and arrest me, Officer. Once I call my Uncle Larry, I’ll be out before you can finish the paperwork.”

In other words, as in places such as Portland and Seattle, the rioters had nothing to fear here in the City of Brotherly Love, until, that is, the federal government stepped up to do the job that the locals had refused to do.

It started when the FBI arrested the woman pictured below petitioning the government for redress of grievances by torching two Philadelphia police cars. 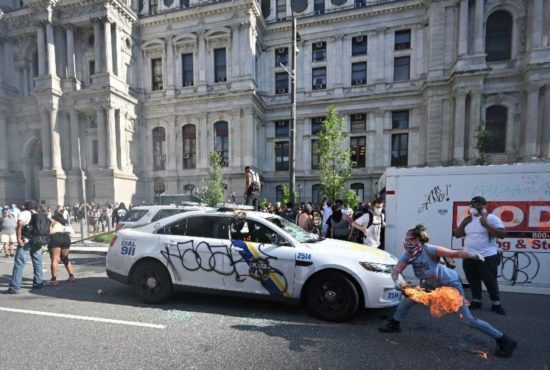 The FBI announced that they tracked her down using social media, which, I am willing to wager, will prove to be an Achilles’ heel for many other millennial radicals.

After her arrest, the Masked Firebomber most likely expected to be released from custody pending trial. After all, that’s been the standard procedure for miscreant Antifards and other violent protesters in the local courts in Philadelphia and elsewhere. But, unfortunately for her, she has landed in the federal system, where, as a target of what we used to call the “Big Eagle,” she will remain confined until the charges are resolved. In the meantime, as she contemplates the alarmingly high conviction rates in federal court and the prospect of spending years in prison, she may well consider seeking leniency by cooperating with her captors to bring other like-minded pretend Bolsheviks to justice. You see, getting co-conspirators to rat each other out is a venerable and time-tested part of the investigative process.

This is but one example of the many federal arrests taking place across the country as self-styled revolutionaries — who developed their radical tactics on nurturing university campuses and in other progressive enclaves — learn the bitter facts of life in the major leagues.

And now the Big Eagle has landed in Portland, Oregon. Acting on information that the kiddie commies have attempted to destroy federal property and are planning more such attacks, specially trained, anonymous, and menacingly silent federal agents in full combat gear (including face-covering gas masks and eye protection) are making nightly forays across the city to snatch isolated Antifards and whisk them away in unmarked vehicles. Thanks to Antifa we have a thoroughly entertaining video of one such arrest.

Click on the picture below and listen to the rising fear and anxiety in the female voice as she demands of the silent agents, “What are you doing? Use your words! Who are you? Use your words!”

Particularly entertaining is the video’s big finish as the outraged woman shouts that the masked feds are “violating the rights” of the soy-boy play thug.

Most of those arrested in Portland have been held for court. In at least one instance, however, an arrestee was searched, placed in a holding cell, read Miranda warnings, and then released when he refused to answer questions. So why do this? Simple. It’s a very effective means of gathering intelligence. Stripped of their goggles, helmets, and masks, arrestees can be photographed, and their identifiers, such as fingerprints, body markings, etc., can be recorded. What information these idiots haven’t given away for free by way of Facebook and other social media, a quick check of their cell phones and search of their pocket litter can provide.

Quit predictably, the Portland and Oregon authorities want the feds to quit picking on the rioters and have filed suit to halt the arrests. But, speaking on Maria Bartiromo’s Sunday Morning Futures show, President Trump made clear that the agents will not be standing down in Portland or elsewhere. Watch the video below for Trump’s warning as well as Bartiromo’s interview of Acting Customs and Border Protection Commissioner Mark Morgan regarding the federal operations in Portland.

So the battle lines are drawn. As the pandering Democrats try to gain political advantage by sacrificing the safety, property, and livelihoods of innocent citizens trapped in dystopian progressive-led cities, President Trump has stepped forward to put a stop to the anarchy and destruction. This is what government is supposed to do, and, in saner times, local authorities have discharged that duty to their constituents.

But these are not rational times. Thanks to 50 years of conditioning by the socialist triumvirate of academia, Hollywood, and the mainstream media, we are now burdened with masses of mindless, angry, intolerant, and violent junior Jacobins acting out in public their cancel culture wet dreams. Working with the tacit support of progressive Democrat mayors and governors and encouraged by the media, they seek to use their rioting and violence as a political weapon to, in Hitler’s words, “sap out the will” of the American people and demand of us “obedience and blind submission.”

But the rioters have made a fatal error. They have mistaken the ordinary, patriotic, and despised Americans who are this country’s vast majority for the jelly-spined college administrators and elites who surrendered long ago to the radicals’ mob tactics. But the vast majority of normal Americans — who just want to be left alone — are reaching the boiling point. And, as history has proven time and again, when we reach our limit and decide to strike back, the results can be devastating.

So here’s a warning to the anarchists and rioters. Right now, as the feds make the easy arrests of your co-conspirators for flagrant, easily proven acts of violence and destruction, the rioters may rest assured that much, much bigger things are on the way. They should expect massive and ruinous RICO and conspiracy prosecutions that will take down the leaders and financiers of their movement as well as those who have done the actual hands-on dirty work.

This isn’t going to end with the wrist slaps to which the anarchists have become accustomed. This is about to get very serious.

Or, as the Irish nationalist Padraic Pearse once wrote, the anarchists should “Beware, Beware of the thing that is coming … ”

Grim words, indeed. But, for the rest of us, the fun is just about to begin.