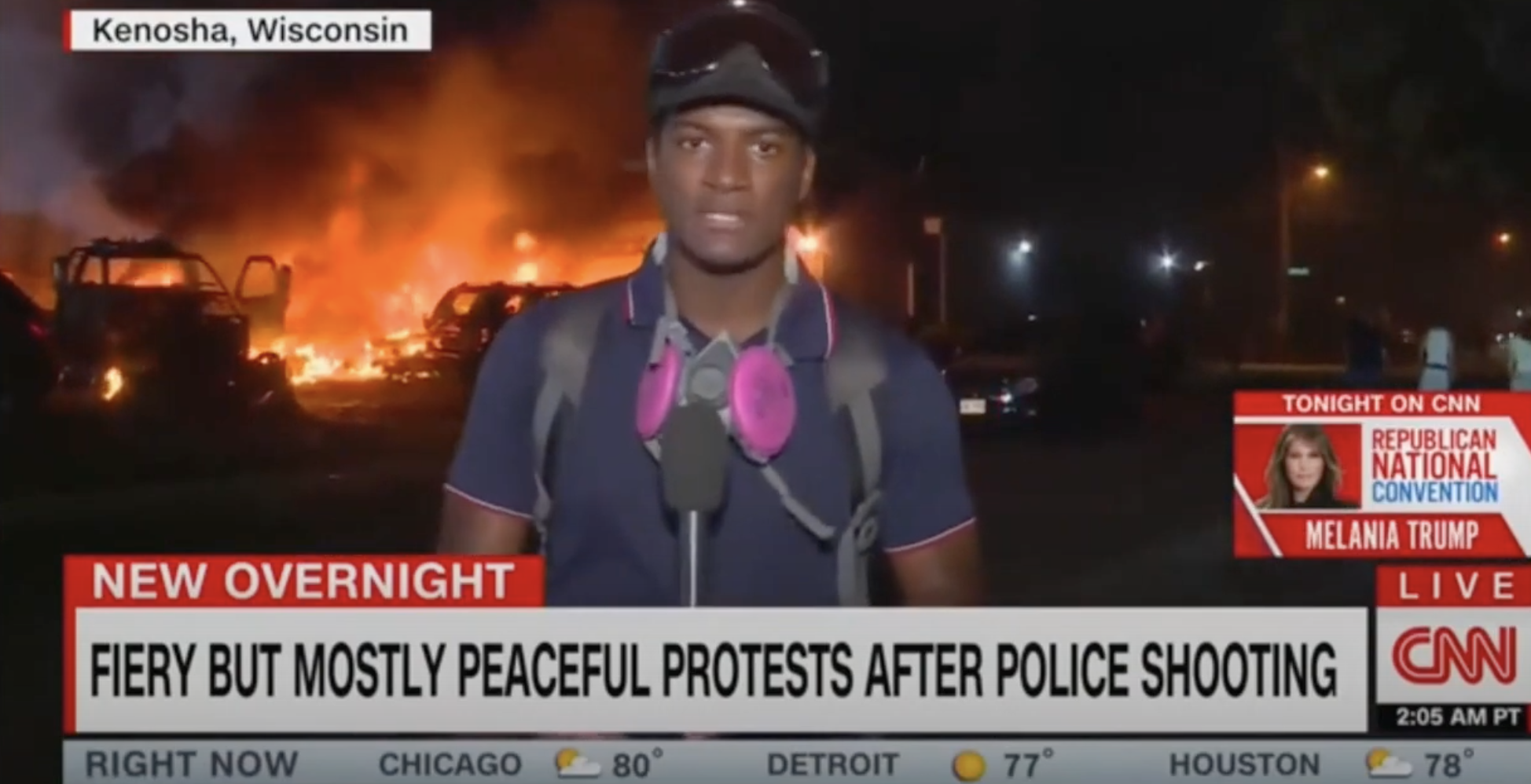 Don Lemon made news this week, although he did it by accident and almost nobody noticed. CNN is the least-watched of the three cable-news networks, and Lemon’s program “CNN Tonight” typically gets a little more than a million viewers, or less than a third of the audience for most primetime hours on Fox News Channel. Very few people were watching when Don Lemon made news Tuesday night, by revealing how deeply his network is embedded with the presidential campaign of Joe Biden. Discussing the riots in Kenosha, Wisconsin, with fellow CNN anchor Chris Cuomo, Lemon expressed concern that mob violence would damage the Democrats’ chances in November:

Question: How does Don Lemon know what people are telling Democratic Party pollsters in focus groups? But asking a question like that is probably racist. Anyone who doesn’t support Biden is a racist, as is anyone who criticizes CNN.

Such simple-minded formulae are CNN’s journalistic stock-in-trade nowadays. Mocked four years ago as the “Clinton News Network,” CNN has since then labored diligently to destroy whatever credibility they still had after Hillary’s failed campaign. Since President Trump’s election, CNN has kept busy promoting the phony “Russian collusion” hoax and went all-in on the smear campaign against Supreme Court Justice Brett Kavanaugh, yet still somehow found time to defame Nicholas Sandmann. One of the highlights of this week’s Republican National Convention was watching Sandmann’s victory lap after CNN was forced to settle the Catholic schoolboy’s defamation lawsuit.

You might think four years of failure, including the humiliation inflicted by Sandmann, would teach CNN a lesson. But the problems at the third-place network seem irreparable, and they continue stumbling from one embarrassment to another. In the wee hours of Tuesday morning, the network outdid itself when CNN reporter Omar Jimenez stood in front of a burning building in Kenosha, above an onscreen chyron that declared, “Fiery But Mostly Peaceful Protests After Police Shooting.” Yes, it was mostly peaceful, except for the looting and arson.

Endeavoring to describe what’s wrong at CNN is perhaps an impossible challenge, but the briefest summary is everything. Or to put it more directly: Jeff Zucker.

Since taking over CNN eight years ago, Zucker has done what anyone familiar with his previous career would have expected him to do, namely (a) screw it up, and (b) blame others. In case you’ve forgotten, Zucker’s previous tenure at NBC was a gigantic disaster. In 2010, one of Maureen Dowd’s sources called Zucker “the most destructive media executive ever to exist.” How he talked himself into the top job at CNN is a mystery, but no one is actually surprised by the network’s failure since Zucker took over. If you want good TV, you don’t hire Zucker, and CNN is very bad TV.

As bad as CNN’s liberal bias is — and when Trump speaks of the media as “the enemy of the people,” it’s CNN’s Jim Acosta he has in mind — mere politics is insufficient to explain the network’s awfulness. MSNBC is blatantly left-wing, but at least they manage to be entertaining. If you’re a Democrat who believes that Trump is an existential threat to everything you hold dear, then watching Rachel Maddow engage in paranoid speculation for an hour might be your idea of fun. Watching CNN is never fun, except accidentally, as when Don Lemon leaks out Democrat focus-group findings or the chyron describes a riot as “mostly peaceful.”

CNN is a nonstop bummer of repetition. After switching my office TV to the network on Thursday (I watch CNN, so you don’t have to), I was struck at the formulaic nature of the programming. Evidently, somebody at CNN headquarters decides at the start of each day what four or five stories will be covered, and what the angle on each story will be. Thursday’s major themes were blaming Trump for Kenosha, blaming Trump for COVID-19, blaming Trump for the postponement of the NBA playoffs, and occasionally mentioning Hurricane Laura, which smashed into the Gulf Coast (and was probably also Trump’s fault). Every hour, these anti-Trump themes were revisited or updated with the “news,” for example, that the teenager accused of shooting three rioters in Kenosha is a Trump supporter.

What is important to understand, in seeing what’s wrong at CNN, is how their relentless focus on a comparative handful of stories — and their obsession with Trump — makes the network’s coverage repetitive and boring. Specific narratives and themes control the decision-making process at CNN, and any intelligent viewer can see how their coverage is organized to convey certain messages.

Consider how CNN has covered the situation in Kenosha. Every hour since the story went viral Sunday, CNN viewers have been told that a cop shot Jacob Blake seven times in the back, and the network portrays the “mostly peaceful” protests as logical and necessary reactions to that. This is quite nearly all a CNN viewer is allowed to know; every other potentially relevant fact is ignored. So this over-simplified story is repeated hour after hour, day after day, updated with such news as would tend to support the “social justice” narrative of Kenosha. What is utterly lacking in this repetitive coverage is any actual effort to provide CNN’s audience with answers to questions about the how and why of this incident.

For example, instead of having Omar Jimenez stand in front of a burning building to declare the Kenosha riots “mostly peaceful,” CNN producers might have assigned their reporter to try and interview someone who attended the Sunday party where Jacob Blake got shot. Until Thursday, no news outlet had reported more than a bare-bones description of what preceded the shooting: At a birthday party for one of Blake’s sons, two women got into an “altercation” serious enough that someone called 911. When police arrived, Blake was reportedly attempting to break up the fight between the two women. But how does that explain why police were trying to detain Blake? And then Thursday — while CNN was busy reiterating their over-simplified version of the incident for the fifth consecutive day — Wisconsin officials finally clarified what happened (my emphasis):

A man shot by a Kenosha police officer admitted he had a knife in his possession, according to the Wisconsin Department of Justice.

According to a preliminary report from the DOJ, a woman called police Sunday evening saying her boyfriend was there and wasn’t supposed to be on the premises. The DOJ did not specify if Jacob Blake was the boyfriend.

After police responded to the call they tried to arrest Blake. One officer used a Taser but it didn’t stop Blake, who is seen on a bystander’s video walking away from officers and leaning into his SUV when he was shot by an officer from behind.

The DOJ identified the officer as Rusten Sheskey, a patrol officer and member of the Kenosha Police Department for seven years. It says he fired his service weapon seven times while grabbing Blake by the shirt. No other officers fired a weapon.

“There have been interviews conducted of material witnesses but the investigation remains ongoing,” said Attorney General Josh Kaul during a press conference on Wednesday in Kenosha.

The DOJ’s Division of Criminal Investigation is handling the investigation into the officer-involved shooting. DCI agents found a knife on the driver’s side floor of Blake’s SUV and no other weapons.

This is highly relevant. First, it explains why Blake was seen on video reaching down into the vehicle — trying to get the knife — and second, it explains why officers were trying to arrest Blake. It had previously been reported (not by CNN) that Blake was charged in July with “third-degree sexual assault, trespassing and disorderly conduct in connection with domestic abuse.” Blake also had other criminal charges in his past, and had been involved in child-support disputes. It seems reasonable to surmise that Blake was the subject of the 911 call complaining about someone who “wasn’t supposed to be on the premises,” perhaps because of a restraining order related to the domestic abuse charge.

CNN viewers weren’t informed about this, because these facts don’t fit the preferred narrative in which Blake is a victim of “systemic racism.” Instead, it appears Blake was a perpetrator of violence against women (an issue Democrats claim to care about), and police were there to protect a woman from her alleged abuser. But if all you know is what you get from CNN, you don’t know anything about this. To be a CNN viewer is always to be underinformed or misinformed, because the network’s coverage is mainly aimed at trying to elect Democrats to office, rather than providing accurate information about current events. To watch CNN’s coverage is to be reminded of the blogger Iowahawk’s quip, “Journalism is about covering important stories. With a pillow, until they stop moving.”

Alas, if pointing out CNN’s errors could stop CNN from getting worse, they might actually have gotten better by now, but the network seems to be beyond rescue. Not even losing a defamation case to a teenager in a MAGA hat could cause them to contemplate the error of their ways, however, and thus CNN is destined to retain their dubious distinction as The Worst Network Ever.