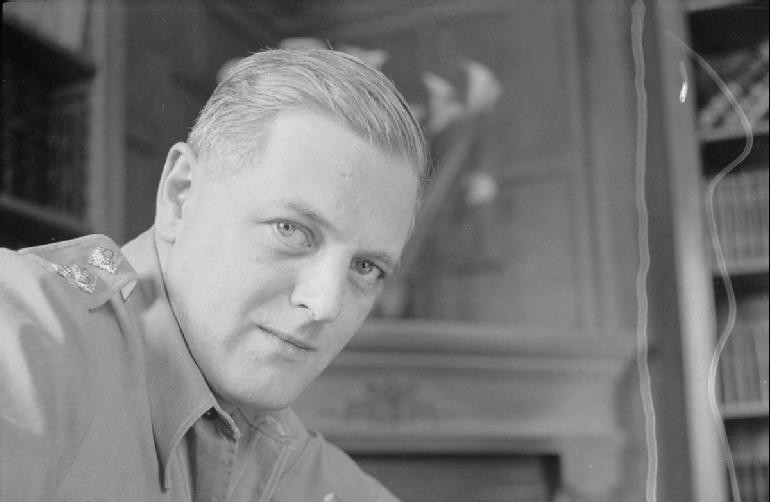 Despite an inauspicious beginning, Churchill & Son is a thoughtful study of a father-son relationship during the storms that rocked the 20th century. Randolph Churchill has now prompted six books — not bad for most Churchills short of his father (1150 and counting). Josh Ireland here confronts his bittersweet Life with Father, adding fresh insights and thoughtful appraisals to our understanding of the great man and his offspring.

Both remarks are unjust. Lord Randolph Churchill was a busy politician, wrote Celia and John Lee, yet he tried “to secure the future of both his boys, and he went to a good deal of trouble on their behalf, for which he gets no consideration whatsoever.” Winston’s son Randolph created the longest biography on the planet, Winston S. Churchill — the standard work for generations of scholars. Both fathers and both sons did much for each other.

Ireland avoids such pat summations. With no apparent axe to grind, he limns the 45-year Winston–Randolph relationship, good, bad, and ugly. There are a few errors and skewed judgments that put an uneven gloss on events. Yet Ireland largely follows Randolph’s own maxim, “I am interested only in the truth.”

The prologue is brief, eloquent, and a good omen, but after the first two chapters of potted background I was ready to toss this book, with its superficial accounts of Lord Randolph’s purported syphilis, Winston’s parental neglect, a Clementine Churchill remindful of a flawed recent biography, and some bad history: Winston is supposedly hot for war in 1914, he “abandons” the Admiralty to defend Antwerp, he invents the Dardanelles operation, he is a toff in the trenches of World War I, and he mortgages a country house in Clementine’s name.

Each of those assertions is wrong, obfuscating the broader reality. Churchill tried harder than any minister to save the peace, the Admiralty was ready for war because he made it so, Antwerp’s prolonged defense salvaged key French ports, and he didn’t abandon his post; he was sent there. But never mind. What follows is increasingly good. It’s best to skip to chapter three, as Randolph begins growing up — all too precariously.

The boy matures in the Churchill milieu with all its boisterous vivacity and contention, its long lunches and dinners with exalted personages. His father betimes accomplishes the work of two men: speeches, articles, books, meetings, hobbies, and travel, holding nine offices within 16 years. Such a mélange was bound to affect any youth growing up in it. Winston, trying to compensate for what he saw as his own father’s neglect, overindulged Randolph; his friend Lord Birkenhead taught Randolph to drink. The combination produced oratorical flourishes and boorish overconfidence. Winston contributed by waving his famous cigar for silence while Randolph held forth to movers and shakers of the age.

On a 1929 holiday in North America (incorrectly called a lecture tour), Randolph’s circle widened to movie stars and captains of finance and industry. What they saw “was a young man whose self-confidence was so large it appeared it could swallow galaxies whole.” What they missed was the deep sensitivity acquired in his upbringing: he “learned early on to hide this vulnerability … beneath the surface arrogance.”

Here Ireland spots a crucial contradiction. Randolph was explosive, “his conceit unsupportable.” Yet inwardly he ached for his father’s approval (and his mother’s, much harder to come by). Too often he tried to resolve the dichotomy with conflict. Winston would say, “I love him very much,” yet his son often reduced him to apoplexy. Randolph would say, “I do so very much love that man, but something always goes wrong between us.” Their relationship was a “brutal mix of anger and pain.”

Winston’s hopes for his son waxed in 1935, when Randolph ran for Parliament in Tory-blue Wavertree, Lancashire, challenging the official Conservative candidate. His father, hoping for office in the next Tory government, was initially outraged. But when Randolph began attracting huge crowds, Winston hopefully campaigned for him. Alas, Randolph split the Tory vote, handing the seat to Labour. (Ireland omits the tally: Churchill 24 percent, Conservative 31 percent, Labour 35 percent). This is the best account one may read of Randolph’s rollicking political apogee. (True, he got in for Preston in 1940, but that was an uncontested seat during the wartime political truce, and he was ejected in 1945. He ran other times before and after the war, but always lost.)

Father and son were never closer than in the 1930s, each a pariah to the Conservative Party. But Winston could separate politics from personal friendships, and his son could not. “Everyone knew what Winston thought about men like Baldwin,” Ireland writes, but “he was also punctilious about preserving at least the appearance of civility.… Randolph either did not care or could not control himself.” 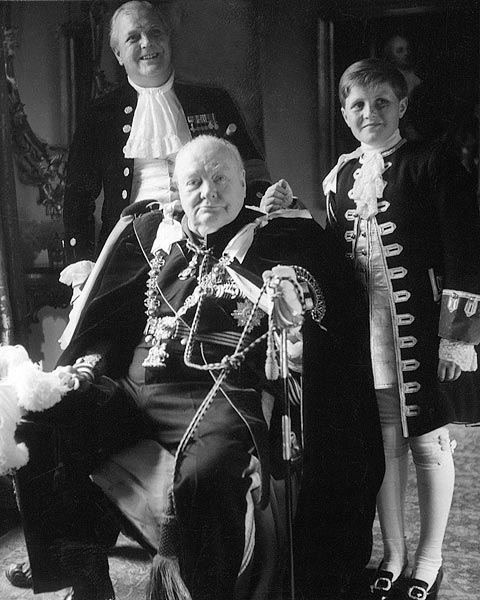 With war and Winston’s government, Randolph was passed over: his “explosive energy; his willingness to defy anybody, irrespective of their rank or position — were hindrances now.” As close as he came was the office of Chamberlain’s toady, the appeaser Horace Wilson. The day Churchill became prime minister, Wilson returned from lunch to find Randolph and Brendan Bracken in his office, smoking huge cigars and glaring at him. Wilson fled, never to return.

The favored Bracken, who became Churchill’s Minister of Information, liked to fan the silly canard that he was Winston’s illegitimate son. Randolph, who could only join the Army, loved Bracken but called him “my brother, the bastard.” Randolph served bravely, in part with Yugoslav partisans. When his father told Marshal Tito he wished he was fighting at his side, Tito remonstrated, “But you have sent us your son,” and tears of emotion rolled down Winston’s cheeks.

Randolph’s postwar years were suffused by the grim, monochrome reality of rationed, straitened, impoverished Britain. An Adonis in youth, he aged like Wilde’s Dorian Gray. His 1939 marriage to Pamela Digby went aground in 1946, not least because he knew of her wartime dalliance with Averell Harriman. Ignoring his own countless flings, he unfairly blamed his parents for abetting the affair to court favor with Roosevelt’s envoy. Few of his lady friends could really handle him, but those who did, like his last love Natalie Bevan, assuaged Randolph’s intense craving for affection. They found him impossible, but they admired his generosity and courage.

One of Randolph’s great redeeming qualities was a hatred of injustice. In America he voiced outrage over the “barbaric, unlawful Negro lynchings in your South,” comparing the “outrageous treatment of your Red Indians” with the “benevolence” of the Indian Raj. Upon landing at Cape Town he was required to state his race. “Damned cheek!” exclaimed Randolph. Fanning an old myth, he proudly declared his “coloured blood” through “the Indian Princess Pocahontas.” In 1963, when the paparazzi hounded John Profumo following a scandalous affair, Randolph made his home the Profumos’ sanctuary, ordering his staff to bar the media: “There shall be no rot.” (In 1940, Profumo was the youngest MP to vote against Chamberlain in the division that brought Winston Churchill to power.)

“If you knew Randolph well,” Lord Norwich said, “you loved him.” Few, says Ireland, saw that side of him. He “staggered around London, littering his path with gratuitous insults…. He ruined parties, gate-crashed private dinners, immolated friendships that had lasted for decades…. Randolph lived in a cheerful kind of chaos, a function of the self-sabotaging streak in him that had been nurtured by alcohol.”

And yet he became a notable journalist, covering three wars, writing 15 books and hundreds of articles and editing seven volumes of his father’s speeches. In 1959, when he published Lord Derby: King of Lancashire, an enthralled Winston gave him what he’d long wanted: the writing of his biography. It was his chance at redemption, “to create a lasting record of his love and devotion to the man he had loved more than any other person he had ever known. In the process of telling the story of his father’s life, he belatedly gave meaning to his own.” 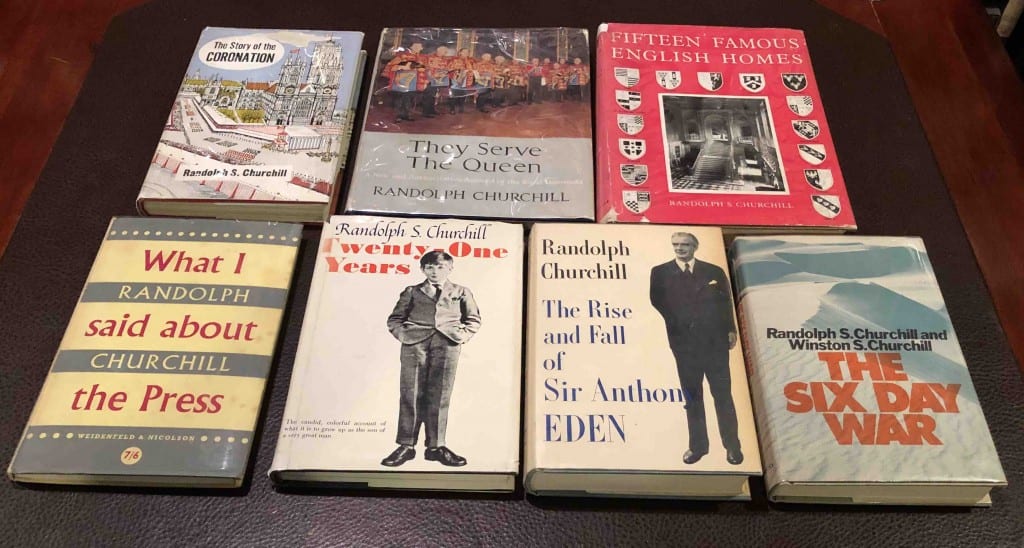 In 1996, I thought His Father’s Son, by Randolph’s son, the best book about him. I still do, but Churchill & Son deserves to stand with it as the testimony of a perceptive outsider. “Randolph Hope and Glory,” as detractors referred to him in the 1930s, emerges as a dynamic speaker, a brilliant journalist, a gallant soldier, a skilled biographer, a frustrated son — and an honest man: as honest about himself as he was of others. Not so bad an epitaph, after all.

In 1996 his son wrote, “We buried him in Bladon churchyard, beside his grandfather, and his father, whom he loved and revered so deeply. To this day the memory of him lingers on in the hearts of his friends.” I think Randolph would settle for that.