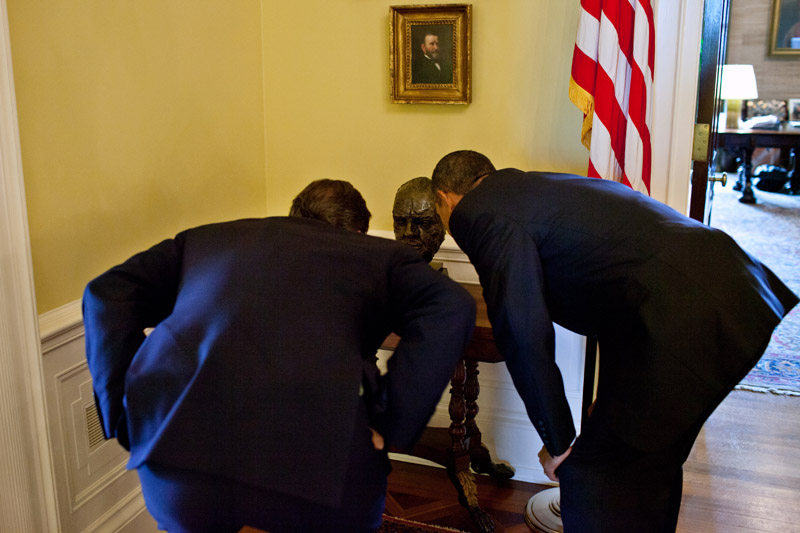 Since 2009, every change of presidents has been accompanied by a great furor and scurry among the punditry over whose busts are in the Oval Office. The greatest controversy involves Sir Winston Churchill — of which more anon. Let’s first list the sculpture President Biden has installed, and those items formerly displayed by President Trump.

Two busts were kept by both presidents: Abraham Lincoln and Martin Luther King Jr. Although we observed a bust of Lincoln being carried out in Trump’s wake, it appears different from the one pictured to the left of the Resolute Desk in recent photographs.

New to the Biden Oval Office are busts of farmworkers unionizer César Chavez, bus boycott buster Rosa Parks, Sens. Daniel Webster and Robert Kennedy, Eleanor Roosevelt, and President Truman. There is also an equestrian bronze of an Apache warrior. Gone with Trump are Remington’s bronze Bronco Buster, an equestrian figure of Andrew Jackson, and — the cause of all angst — a bust of Winston Churchill by Jacob Epstein.

Contrary to knee-jerk apoplexy in some quarters, the Churchill was not replaced by Chavez, who rests behind the president’s desk. Sir Winston was replaced by Harry Truman. To use a baseball analogy, the Biden “infield” comprises Rosa on third, Abe at shortstop, César on second, and Harry, not Winston, to the right of the mound — much as Babe Dahlgren replaced poor Lou Gehrig on May 2, 1939.

I think Sir Winston would actually approve of his replacement. In 1953, he spoke of Truman’s “gay, precise, sparkling manner and obvious power of decision.” On his last visit to the Truman White House he told the president, “You more than any man have saved civilization.” Nonetheless, it’s Churchill’s absence that draws the attention.

It seems that every four or eight years we must endure a Great Media Hoedown over an Epstein Churchill bust arriving at, or departing, the White House. The revolving door bust belongs to the British Embassy. It has twice resided on loan in the Oval Office — and has twice returned. Perhaps it should hang on a zipline between the two buildings to convenience the spirit of the moment.

Whenever Winston makes a trip back or forth, the media explodes in speculation. Does this signify the end (or renewal) of the Anglo-American Special Relationship? Is it a gesture of disdain (or admiration) by the new president? Does this mean there won’t (or will) be a trade deal between America and post-Brexit Britain?

It is necessary to explain that there is more than one Epstein bust. The renowned sculptor cast eight or 10 from his original mold. All are highly prized. One belongs to Her Majesty the Queen. A few are in private hands. I sold one myself to a Connecticut collector when I was a Churchill bookseller.

(Incidentally, Jacob Epstein once lived opposite the Churchills in Hyde Park Gate, London. Puttering in his garden, he took delight in answering visitors’ questions about his neighbo(u)rs. “People thought I was the gardener,” he quipped.)

Epstein #1: The bust that never left

Unknown to most, there has been a Jacob Epstein bust of Sir Winston in the Executive Mansion since the Johnson administration in 1965. “Epstein #1,” distinguished by a brass plaque, is normally displayed outside the Treaty Room near the family quarters.

In 2017, President Trump asked the Embassy to loan back an identical bust — let’s call it “Epstein #2” — which had adorned the Oval Office during the George W. Bush administration (2001–09). Pending its arrival, Trump moved Epstein #1 downstairs from its previous position in the family quarters. When Epstein #2 arrived, Epstein #1 went back upstairs.

President Obama had to pass Epstein #1 every time he entered the Treaty Room to watch a basketball game. So it can hardly be asserted that he was determined to rid the house of Churchill images. Indeed, he made a point of showing it to Prime Minister David Cameron on his visit to the White House. In describing this bust and his daily encounters with it, Obama said of Sir Winston, “I love the guy.”

After 9/11, the British Embassy loaned President Bush Epstein #2 as a gesture of solidarity. It is, of course, identical to the other Epstein busts. The only difference is that the plinth bears a white-on-black plaque, not a brass plaque like Epstein #1. 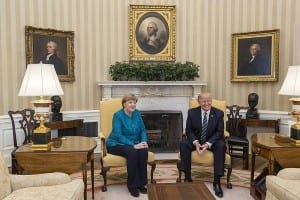 “Epstein #2” on the table behind President Donald Trump during his meeting with German Chancellor Angela Merkel. The bust moved around; in this photo it flanks the fireplace at the far end of the room. (Official White House photo)

In 2009, before Mr. Obama arrived, Epstein #2 was returned to the Embassy. It was not returned specifically by Obama, although he received blame for the act. There are stories that he rejected the image or “put it into mothballs” out of hatred toward the former prime minister, British colonialism, or something. This is incorrect. If he felt that way, he would not have kept Epstein #1 on prominent display upstairs.

James Barbour, British Embassy press secretary, explained that Epstein #2 was “lent to the George W. Bush Administration from the UK’s government art collection, for the duration of the presidency.” White House curator William Allman said in 2010 that the decision to return Epstein #2 had been made before Mr. Obama even arrived: “It was already scheduled to go back.”

It is true that the incoming Obama administration was offered Epstein #2 on extended loan out of courtesy, but wanted to make room for a bust of Martin Luther King Jr. They might have acted knowing the White House had another Epstein already. Trump did not remove the King bust when he brought back Epstein #2. “I would never do that,” he said, “because I have great respect for Dr. Martin Luther King.”

I have said a few rude things about Mr. Obama, but not over Epstein #2. I welcomed its return to the British Embassy, and then offered reductio ad absurdum. After all, the Obama White House still had more Churchilliana than the Bush White House. Epstein #2 was replaced with Winston S. Churchill, Martin Gilbert’s majestic biography, which weighs almost as much and takes up more space. Journalist Jake Tapper blasted out the truth back in 2012. Tapper explained in Churchill’s words: “How did I figure out what was really going on? I never gave in — never, never, never, never. In nothing great or small, large or petty.” As pettiness goes, this subject has had quite a ration.

Now that Epstein #2 has again left Oval Office, with malice toward none and charity for all, a few observations:

1) Together with the Official Biography, presented to President Obama by Prime Minister Gordon Brown, the White House today is brimming with Churchilliana. Churchill admirers must regard this as a fine thing.

2) As to its alleged symbolism for the Anglo-American Special Relationship, I recommend a rather broader perspective offered by the American Embassy in London. Click here and scroll to the video.

3) While all Churchill fans were glad to see his bust in the Oval Office, every president has the right to the totems of his choice. A correspondent with whom I rarely agree about anything hit the nail on the head when he cited Supreme Court Justice Robert H. Jackson in one of the flag salute cases in 1943:

Struggles to coerce uniformity of sentiment in support of some end thought essential to their time and country have been waged by many good as well as by evil men…. If there is any fixed star in our constitutional constellation, it is that no official, high or petty, can prescribe what shall be orthodox in politics, nationalism, religion, or other matters of opinion or force citizens to confess by word or act their faith therein.” (West Virginia State Board of Education v. Barnette, 319 U.S. 624.)

Now if only we can impart Justice Jackson’s wisdom to the bosses of Apple, Google, Twitter, and Facebook, all will be well.

Richard M. Langworth CBE is the author or publisher of 10 books on Churchill and Senior Fellow of the Hillsdale College Churchill Project.