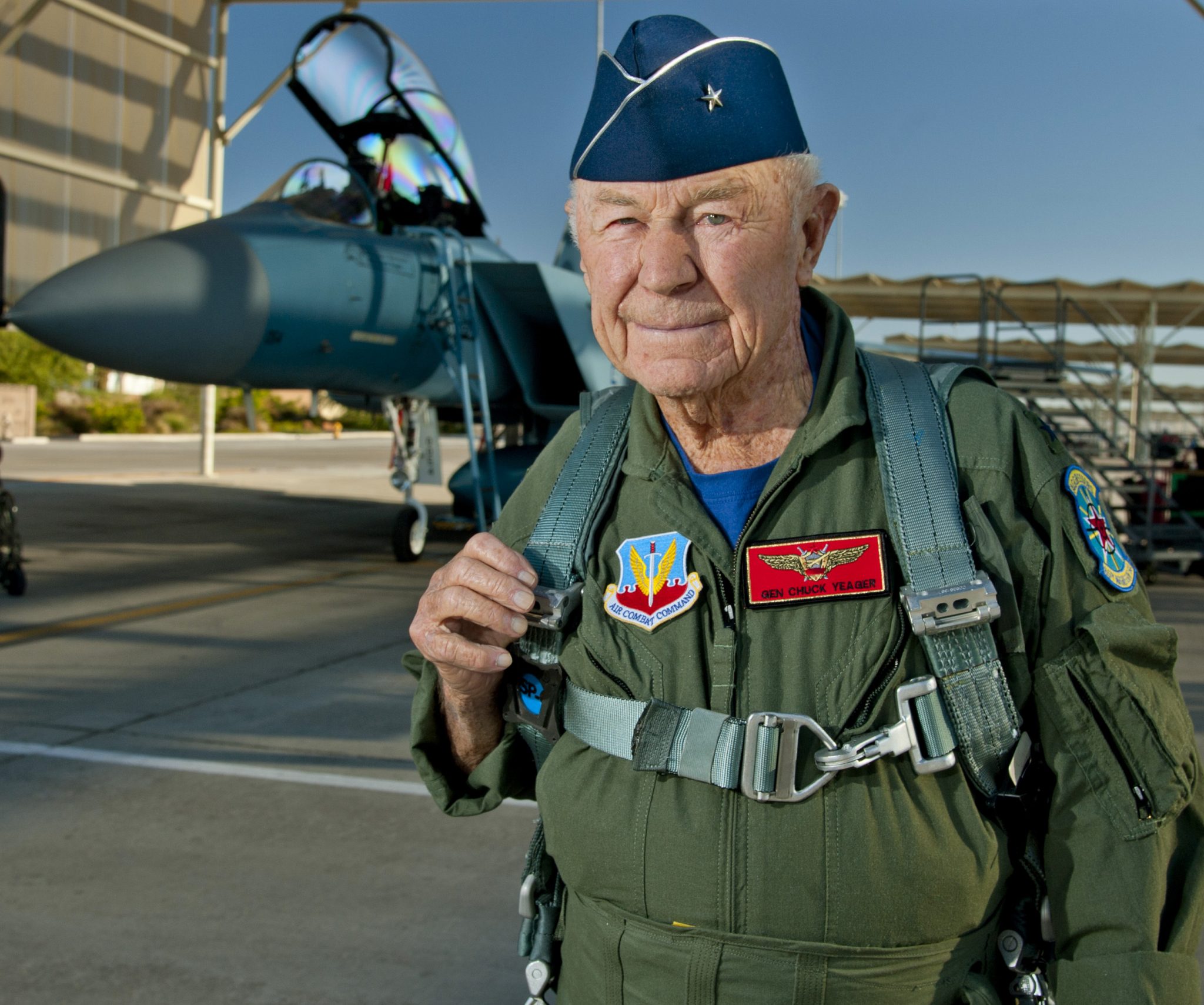 We’ve lost another great American. Gen. Chuck Yeager, a World War II double fighter ace and the first man to fly faster than the speed of sound, died Monday in a Los Angeles hospital. He was 97.

Tom Wolfe called Yeager “the most righteous of all the possessors of the right stuff.” No one who knows Yeager’s biography will argue with this.

After wartime combat, during which Yeager shot down 13 Luftwaffe fighters, five in one day, Yeager became a test pilot. He risked life and limb putting new and experimental planes through their paces. It was on test pilot duty in 1947 when Yeager flew the Bell X-1 rocket plane through the sound barrier. Going supersonic may be routine now. Citizens living near Air Force bases or Naval air stations have accommodated themselves to sonic booms. But in 1947 no one knew what would happen when a plane passed the speed of sound. Some thought this would be so jarring that the shock waves would make the plane break up. Yeager risked it and made history.

There was so much in the life of this warrior, patriot, and brave aviation innovator that exemplifies the best that America has produced.

But Yeager’s own history contains much more than the first sonic boom. Born in Myra, West Virginia, in 1923, the son of a man who  drilled for natural gas in West Virginia’s coal fields, Yeager was the original country boy, with the drawl to prove it. An indifferent student, he was happier in the woods shooting rabbits and squirrels than in school classrooms, where he found little that interested him. In addition to being a good enough shot to put food on the Yeager family table, he was a whiz at anything mechanical. After graduating from high school, thanks more to attendance than academic effort, Yeager joined the Army Air Forces in 1941 and became an aircraft mechanic. In the summer of 1942 he managed to wangle his way into flight school. There followed his wings, eventually a commission, and a long and distinguished career as a warrior, test pilot, and leader of men.

Those familiar with his work in the air called Yeager a natural pilot, with the intelligence, coordination, reflexes, and spatial acuity of the first-rate combat aviator. The modest Yeager gave other reasons for wanting to be a pilot rather than a mechanic: “I was in maintenance, saw pilots had beautiful girls on their arms, and didn’t have dirty hands, so I applied,” he said. And who can fault him?

Not every mission Yeager flew in his P-51 Mustangs over Europe was an unalloyed success. On his eighth mission he was shot down over France by a Luftwaffe fighter and had to bail out. With the help of the French underground he made his way across the Pyrenees to neutral Spain and then back to his squadron and more combat.

After the war Yeager entered his test pilot years, during which his history-making supersonic flight was only one of his important accomplishments. This flight, by the way, was made when Yeager could barely move from two broken ribs, sustained literally horsing around. He was thrown from a horse when he and his wife were racing at night in the desert. He didn’t tell his superiors about this disability, afraid the historic flight would be canceled.

When test pilot days were over, it was back to combat in Vietnam. Then Col. Yeager commanded a fighter wing and flew 127 combat missions, mostly pounding the Ho Chi Minh trail, the supply line for the Viet Cong and North Vietnamese Army troops in the south.

Yeager retired from the Air Force in 1975 at the rank of brigadier general. To his long list of military decorations was added the Presidential Medal of Freedom, awarded to him by President Ronald Reagan in 1985. Few have done more to preserve freedom than these two.

Like most boy children, I was interested in airplanes as a youngster and read a good deal about aviation history. So I was familiar with the name before Wolfe’s book, The Right Stuff, and the movie of the same name made Chuck Yeager a fairly familiar and respected name — so familiar that Yeager was featured in a few television commercials.

How familiar and popular the book and movie had made Yeager was brought home to me one evening in the eighties when I was working in Washington. I’d read in the small print of the Washington Post’s entertainment section that Yeager was scheduled to talk at the Air and Space Museum. I imagined this was to be in a moderately sized room with a few dozen airplane groupies in attendance. Wrong. Wrong. Wrong. I brought my dog-eared copy of The Right Stuff with me in hopes of sharing a few minutes with Yeager and getting him to sign the book. When I arrived, early, I found the talk was in a huge auditorium that must have seated hundreds. I was lucky to find one of the few remaining seats in the nosebleed section.

Yeager was as natural a speaker as he was a pilot. In his talk — with West Virginia drawl still intact — he moved seamlessly from war stories to aeronautical technical stuff to aviation history with the ease, humor, and faultless timing of the good storyteller. Ever the modest “little ole airplane driver,” he had this large audience transfixed. Eating out of his hand. They, and I, would have gladly listened to him all night. As he concluded he received a well-deserved standing O.

There was so much in the life of this warrior, patriot, and brave aviation innovator that exemplifies the best that America has produced. The Greatest Generation produced none greater than Gen. Chuck Yeager of West By-God Virginia, America, and the skies of the world. May he rest in peace with our eternal gratitude.