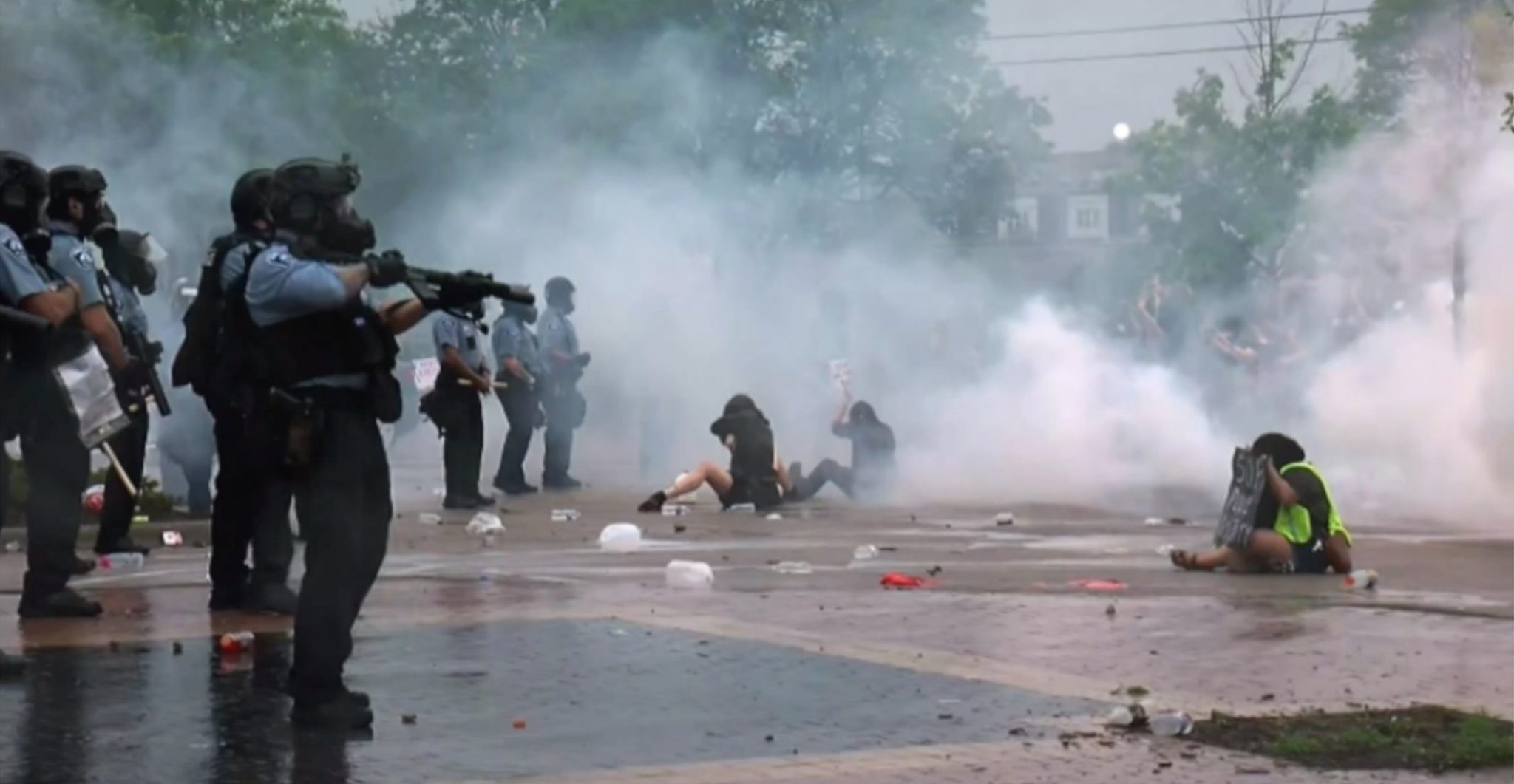 I was perusing the internet for stories about the communist Chinese government’s brutal crackdown on Hong Kong’s pro-democracy demonstrators, who were protesting new national security laws and a measure criminalizing “disrespect” for the national anthem. There was a chilling video of police in riot gear firing rubber bullets at and spraying a chemical irritant on the generally peaceful crowd, but then I noticed the story’s dateline: Minneapolis.

Oops, these were scenes from a different brutal government. Several hundred U.S. protesters had taken to the streets after a video circulated of a Minnesota officer calmly kneeling for several minutes on the neck of an unarmed man named George Floyd. Meanwhile, three other officers helped subdue Floyd, who didn’t seem to be resisting arrest (the police claim he was), but could be heard groaning, “Please, please, please, I can’t breathe” and “Don’t kill me.”

Floyd was detained for what the police department called a “forgery-related” case and then later died after a “medical incident” involving a “police interaction.” That’s police-speak for officers apparently suffocating a man to death after apprehending him for allegedly passing a counterfeit 20-dollar bill. Had it not been for the video, the police report would no doubt have allowed such passive-voice evasions to have been the final word on the matter.

Conservatives should be more open now than ever to concerns about police abuse and the noxious influence of their unions.

Most disturbingly, the officer featured on the video had a nonchalant look on his face, even as passersby pointed out to the officer that Floyd’s nose was bleeding and he wasn’t breathing. It reminds me of author Hannah Arendt’s term “the banality of evil.” It explains why ordinary people will do atrocious things, provided they are done under the auspices of authority. Arendt used it to explain war crimes, but the concept has much wider relevance.

Minneapolis officials tried to quell the growing outrage with a press conference on Tuesday. Police Chief Medaria Arradondo said all four officers involved in the incident were no longer city employees. “I believe what I saw and what I saw is wrong on every level,” said Mayor Jacob Frey. The police department said it would look into its policies for detaining people and the FBI would assist in an investigation. That’s less encouraging than it sounds.

I’ve reported on a number of police use-of-force incidents and can tell you how this is will go down. Not one of the department’s “good” cops will say a peep. The district attorney won’t find sufficient evidence to file charges given the latitude officers have if they “fear for their lives.” If there’s political pressure and this does go to trial, most DA investigators will refuse to participate in the case. The union will pay the cops’ legal defense. The jury won’t convict.

After the furor dies down, the officers will file a lawsuit to get their police jobs back and eventually will be reinstated with back pay. The man in the photo probably will end up with a promotion. If by chance they don’t get their jobs back in Minneapolis, another department will gladly hire them. As a friend of mine noted correctly, the police department will tell the public not to “rush to judgment,” even as its public affairs department releases information that attempts to exonerate the cops and slime the victim (dredging up any past arrests). After this all takes place, the department will announce some additional training, taxpayers will pay a settlement to the deceased’s family, and that will be that. I guaran-damn-tee it, as they say in the South.

One other thing is a near certainty. The case will become politicized. Many conservatives will “back the badge” and rant about Black Lives Matter, as if that group’s involvement negates any of the underlying problems. Liberals will make this totally about race, even though it’s a policing issue that has a racial component. Most of the police-abuse cases I’ve covered have involved white victims, but never mind. Liberals also will ignore how their blind support for unions has led to the rigged “accountability” system described above.

California’s Democratic Legislature has passed one police protection after another, and the police unions have responded in kind — with donations to their political campaigns. Look at some of our state’s most prominent leaders. Attorney General Xavier Becerra has threatened to sue reporters for obtaining information on criminal cops from his own office. Sen. Kamala Harris now describes herself as a progressive prosecutor — but she spent her career as the cat’s paw for police unions.

Such progressives are incorrigible, and they don’t read The American Spectator anyway. But conservatives should be more open now than ever to concerns about police abuse and the noxious influence of their unions. During the lockdowns, police in California have arrested people playing ball with their kids at parks, used riot squads to disperse peaceful reopen protesters at the Capitol, and arrested people, sometimes in a rough manner, for violating social-distancing rules.

Cops implement whatever rules our lawmakers pass. If the order comes down to confiscate our weapons, who do you think will show up to your door? How free can any of us be if any nonviolent violation means a potential death sentence?

The situation is similar to what goes on in the education system. Everyone appreciates the work of teachers, but we know that their unions protect the bad apples, make it impossible to implement reforms, and send most of their cash to the most statist politicians. The same exact process is at work when it comes to police officers.

Police unions help elect officials and bully existing lawmakers into enforcing protections that do figuratively to our freedoms what those Minneapolis officers did to George Floyd. Until we realize that American police will potentially treat any of us the same way that Chinese police are treating Hong Kong protesters, then nothing much will change.