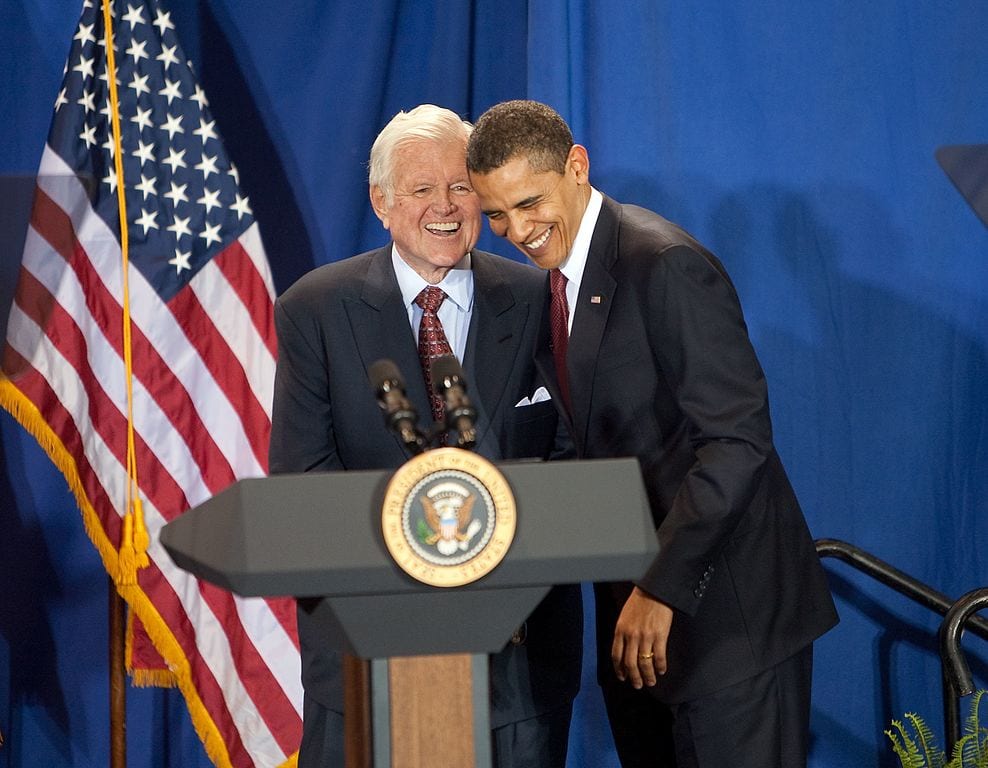 There is nothing like historical context to help evaluate and better understand current events. So, in regard to the mainstream media’s breathless, non-stop coverage of the self-levitating Trump-Russia collusion theory, consider this bit of trivia:

In 1991, when Russian President Boris Yeltsin opened the archives of the Soviet Central Committee, Western researchers quickly descended on Moscow to plow through the treasure trove of previously classified official documents.

Among those researchers was Tim Sebastian, a reporter for the London Times and the BBC who found a May 14, 1983 letter from KGB chief Viktor Chebrikov to Soviet General Secretary Yuri Andropov. Bearing the highest security classification, it summarized a confidential offer by Senator Ted Kennedy to the Soviet leadership to help stop President Ronald Reagan’s aggressive, anti-Soviet defense policies.

The letter was written as the debate was heating up over Reagan’s proposed deployment of intermediate range missiles to counter the Soviets’ medium range weapons in Eastern Europe.

Sebastian reported his find in an article titled “Teddy, the KGB and the top secret file” which appeared in the February 2, 1992, London Times. And there the story remained unheeded and unheralded until 2006 when historian Paul Kengor published The Crusader: Ronald Reagan and the Fall of Communism in which he discussed Kennedy’s secret approach to the Soviets.

In an appendix to his book, Kengor reproduced Chebrikov’s classified missive unedited and unabridged along with extensive documentation establishing its authenticity.

Marked “Special Importance” and bearing the heading “Regarding Senator Kennedy’s request to the General Secretary of the Communist Party Y. V. Andropov,” the letter reported that former California Senator John Tunney had secretly contacted the Soviets on behalf of Kennedy. According to Chebrikov, Kennedy was “very troubled” by poor U.S.-Soviet relations which he blamed on “Reagan’s belligerence.” Kennedy was reported to be “very impressed with the activities of Y. V. Andropov and other Soviet leaders.”

“According to Kennedy,” reported Chebrikov, “the current threat is due to the President’s refusal to engage any modification to his politics.” That refusal was exacerbated by Reagan’s political success, which made the president more obstinate and re-electable. The memorandum then recites Kennedy’s advice that “The only real [political] threats to Reagan are problems of war and peace and Soviet-American relations. These issues, according to the senator, will without doubt become the most important of the election campaign.”

As set forth in the letter, “Kennedy believes that, given the state of current affairs, and in the interest of peace, it would be prudent and timely to undertake the following steps to counter the militaristic politics of Reagan.”

One step would be for Andropov to invite Kennedy to Moscow for a personal meeting. Chebrikov stated, “The main purpose of the meeting, according to the senator, would be to arm Soviet officials with explanations regarding problems of nuclear disarmament so they may be better prepared and more convincing during appearances in the USA.”

Chebrikov stated that Kennedy recommended a public relations program to help the Soviets improve their image with the American public. He believed that the Soviets’ problems resulted from their inability to counter Reagan’s “propaganda.”

According to Chebrikov, “Kennedy believes that in order to influence Americans it would be important to organize in August-September of this year [1983], televised interviews with Y. V. Andropov in the USA” to make a “direct appeal” to the American people. In this regard, Chebrikov stated that “Kennedy and his friends” were willing to help and listed Walter Cronkite and Barbara Walters as good candidates for interviews with Andropov.

The letter advised that implementation of this plan was a matter of urgency since Reagan was well on his way to re-election in 1984. It concluded with a discussion of Kennedy’s presidential prospects in that year and noted that Kennedy “underscored that he eagerly awaits a reply to his appeal.”

As author and historian Paul Kengor has observed, “if the memo is in fact an accurate account of what transpired, it constitutes a remarkable example of the lengths to which some on the political left, including a sitting U.S. senator, were willing to go to stop Ronald Reagan.”

So, what was the reaction of the mainstream media when this alarming document was made public? According to Paul Kengor, not a single American news organization picked up the London Times story.

Similarly, when Kengor published his book which discussed and reproduced the letter, he “couldn’t get a single major news source to do a story on it. CNN, MSNBC, ABC, CBS, NBC. Not one covered it.” And “all mainstream sources” turned down his proffered op-eds regarding Chebrikov’s letter.

Think about that. Here is a classified document found in the Soviet archives from the head of the secret police to the General Secretary spelling out an outrageous and treasonous political plot by Kennedy to enlist the Soviet Union’s assistance in his campaign for the presidency. And not one major media outlet uttered so much as a peep about it.

The discovery of Chebrikov’s letter describing Kennedy’s media advice to Andropov and his efforts to make the Soviet Union a partisan political ally was in and of itself worthy of media coverage. But, beyond that, consider the subtext and clear inference to be drawn from what Kennedy was reportedly telling the Soviets about Reagan’s major point of political vulnerability, i.e., “the problems of war and peace and Soviet-American relations.”

Did Kennedy, in effect, actually tell the Soviets to ratchet up the threat of nuclear war as a means of helping him defeat Reagan? If so, had he taken into account the fact such increased tensions could take an unexpected turn and inadvertently result in such a war? Was he actually willing to risk that in order to win the presidency? Or was Kennedy of such limited intelligence that he didn’t comprehend the dangers posed by his secret outreach and suggestions to the Soviets?

Regardless of the answers, it is astonishing that not one media organization saw fit to ask these questions or to even report the discovery of this explosive document. And the fact that it has remained unreported by the mainstream media all of these years is itself a scandal and quite telling.

The media’s failure to even report or discuss the discovery and contents of Chebrikov’s letter is but one more example of their dishonesty. The fact that they have ignored this story should tell us all that we need to know about their integrity, fairness, and allegiance to the truth. How many more examples of their blatant bias and duplicity do we need before we completely discount all of their reportage as nothing more than progressive agitprop and propaganda?

As a wise man once said, if the mainstream media didn’t have double standards, they would have no standards at all. For further proof of that statement, one need only to compare and contrast the media’s fevered, unhinged coverage of the alleged Trump-Russia collusion theory with the protective cone of silence they have placed over “Teddy, the KGB and the top secret file.”