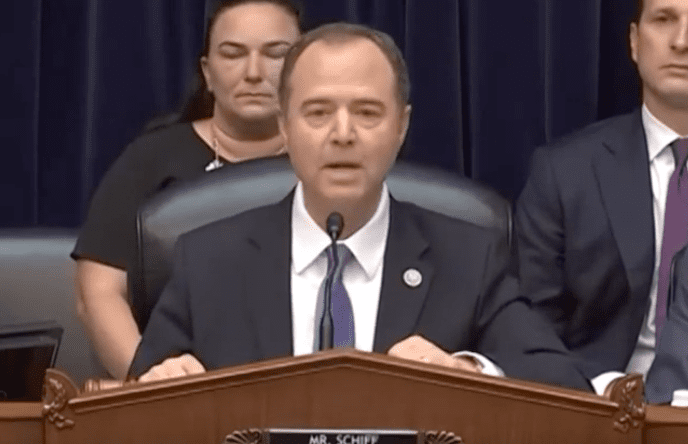 California Democrats Adam Schiff and Ted Lieu are among President Trump’s most vocal, mean-spirited antagonists in Congress — and resistance to their destructive politics is slowly but surely building both on the Hill and in their home state.

Both representatives are high-profile Russia truthers who unfailingly place the Left’s narrative above the truth. They relentlessly promote the crazy Trump-Russia electoral collusion conspiracy theory that was bolstered by the long-discredited dossier compiled by former MI6 operative and Trump hater Christopher Steele at the behest of Hillary Clinton and the DNC.

And now that Ukraine has replaced Russia as the nation state at the center of a new wacky conspiracy theory that has led to impeachment proceedings, a theory in which Trump allegedly tried to strong-arm Kiev into investigating Democrat presidential contender and former Vice President Joe Biden and his son, Hunter, or risk losing U.S. government aid, Schiff and Lieu are back at it.

At a September 26 hearing, Schiff, knowing Americans were watching on TV, read out an invented summary of a transcript of a July 25 telephone call between Trump and Ukrainian President Volodymyr Zelensky in an attempt to portray the U.S. president as a ruthless mafia don.

In reality, Trump made no threats during the call. He told Zelensky that he “heard you had a prosecutor who was very good and he was shut down and that’s really unfair.” He said former federal prosecutor and former New York mayor Rudy Giuliani and U.S. Attorney General Bill Barr would call him. Barr, it so happens, is conducting an investigation that deals with the 2016 U.S. election and Ukraine’s connection to it.

In fact Joe Biden was captured on video in January 2018 bragging about how when he was in office in March 2016 he forced the Ukrainians into firing a top prosecutor by threatening to withhold foreign aid.

“I said, nah, I’m not going to — or, we’re not going to give you the billion dollars,” the former vice president said. “I looked at them and said, I’m leaving in six hours. If the prosecutor is not fired, you’re not getting the money. Well, son of a bitch. He got fired. And they put in place someone who was solid at the time.”

But despite evidence that the Bidens just might have done something illegal, Schiff said the telephone call transcript demonstrated Zelensky “says his country wants to acquire more weapons from us to defend itself. And what is the president’s response? Well, it reads like a classic organized crime shakedown. Shorn of its rambling character, and in not so many words, this is the essence of what the president communicates: ‘We’ve been very good to your country, very good, no other country has done as much as we have.’

“ ‘But you know what?,’ ” Schiff continued, pretending to be quoting Trump, “ ‘I don’t see much reciprocity here.’

“ ‘I want you make up dirt on my political opponent — understand? — lots of it, on this and on that,’ ” Schiff said, again pretending to be quoting Trump.

“This is in sum and character what the president was trying to communicate with the president of Ukraine. It would be funny if it wasn’t such a graphic betrayal of the president’s oath of office.”

Schiff later backpedaled after his dramatic, dishonest interpretation of the president’s words, claiming what he read aloud was intended to be a “parody” of the conversation in the transcript. (Trump responded to Schiff’s actions with another typically memorable insult, calling him “little pencil-neck Adam Schiff.”)

“Chairman Adam Schiff has been lying to the American people for years,” McCarthy tweeted. “Now he is so desperate to damage the president that he literally made up a false version of a phone call. Enough is enough.

“I have signed a resolution to censure Schiff in the House of Representatives,” McCarthy said.

Ted Lieu has joined in with Schiff, falsely accusing Trump of asking Ukraine to “manufacture dirt” on Biden, who may be Trump’s opponent in the 2020 election.

Schiff, now chairman of the House Permanent Select Committee on Intelligence, has spent the last three years smearing anyone who doubts the existence of his conspiracy theory as traitors and agents of the Russian government while apparently leaking details of congressional investigations to his friends in the media every chance he gets.

Lieu, a member of the far-left Congressional Progressive Caucus, has spent the same period becoming a “rock star” — in the words of unbalanced entertainer Kathy Griffin — for baiting the president on Twitter.

There is a “cloud of treason” over the White House, according to Lieu, who claims Trump is guilty of “one or more felonies.” Lieu’s office maintains a “Cloud of Illegitimacy Clock” that keeps track of how much time Trump has “illegitimately” been in office.

Both representatives represent Los Angeles-area congressional districts considered to be safe Democratic seats. Both have been accused by critics of neglecting their districts while they suck up to the Democrats’ far-left base by pushing to impeach President Trump for the unpardonable sin of beating Hillary Clinton in November 2016.

Schiff is in California’s 28th District, which garnered a D+23 rating from the Cook Partisan Voting Index. This means the Democratic vote in the district was 23 percent higher than the Democratic vote in the nation as a whole in the two preceding presidential elections. Lieu represents the slightly less safe 33rd District, which earned a D+16 rating.

One might expect Republicans to shy away from a general election fight with such popular Democrat incumbents, especially since incumbents of any stripe are hard to dislodge, but left-wingers Schiff and Lieu are so obnoxious that two GOP members are rising to the challenge.

“I’ve watched Adam Schiff lie to every one of us for two years about Russian collusion,” Early said. “I’m done watching the ever-evolving disaster that is Adam Schiff.”

Schiff’s “sole focus has been on trying to destroy a president,” he said.

I plan to hold him accountable for his misdeeds and blatant self-interest.

He’s been in elected office for 23 years and has nothing to show for it other than vanity clips on national television and tens of millions of wasted taxpayer dollars.… Homelessness has skyrocketed on his watch. Every day Californians’ cost of living is out of control. Crime is on the rise and Schiff, by his actions and inaction, shows that he couldn’t care less.

And health-care executive James P. Bradley wants the GOP nod in the 33rd District to take on Lieu, whom he said is “pretty much a parrot for Adam Schiff.”

“With Ted Lieu, the last two years have been all ‘resist,’ ‘obstruct,’ and ‘impeach,’ ” Bradley said. “I don’t think Lieu even believes what he says about President Trump and Republicans.”

In addition, Lieu has “turned his back on the district,” Bradley said. “It is literally a dereliction of duty. He’s spent most of his time trying to score political points.”

A prime example came in July, when Schiff and Lieu reflexively called Trump a racist without evidence when President Trump criticized the “Squad” on Twitter, telling them to “go back” where they came from. Because the four leftist congresswomen are not white, the president’s criticism of them must be racist, or so the Left’s logic goes.

“I think tragically the president has decided racism is good politics,” Schiff told CBS. “There’s a reason he keeps returning to attacking these women of color.”

Lieu reacted on the leftist echo chamber known as MSNBC: “I never thought I’d see the day when a president was telling immigrants to go back to where we came from,” he said, adding Trump was “a racist ass.”

But Bradley rejects the racism accusation leveled against the president, whom he says inspired him to run for office: “Trump is not a racist. Half his family is Jewish. There are people around him of many ethnicities, and they don’t think he’s a racist. Democrats continue to smear any and all Republicans as racist which is the farthest thing from the truth. That is their identity-politics smear tactic of choice against anyone who disagrees with their narrative.”

Lieu himself has been accused of racism and hypocrisy. Earlier this year he had to apologize for using the anti-Semitic “dual loyalty” trope to attack U.S. Ambassador to Israel David Friedman, who is Jewish. After Reps. Rashida Tlaib and Ilhan Omar were denied entry to Israel, Friedman said he supported Israel’s decision.

Taiwan-born Lieu tweeted Friedman’s “allegiance should be to America, not to a foreign power” and that he “should be defending the right of Americans to travel to other countries.”

A New Show in Town?

Given the partisan makeup of the two districts, it seems clear that Early and Bradley are fighting uphill battles.

But there is some reason for optimism.

Bradley placed third among 32 candidates in the U.S. Senate primary June 5, 2018, finishing behind incumbent Democratic Sen. Dianne Feinstein and Democratic California state senator Kevin de León. A so-called jungle primary, also known as a nonpartisan blanket primary, is one in which all candidates for the same elected office, regardless of party, run against each other. In this case, the top two finishers went up against each other in the general election and Feinstein won reelection. The month before the primary, Bradley polled at 51 percent voter support, tied for second place.

Will Early and Bradley defy the odds? It may depend on how strong the public backlash is against an unnecessary impeachment proceeding for a successful, albeit eccentric, president presiding over a strong economy.

Matthew Vadum, an award-winning investigative journalist, was Senior Vice President and Senior Fellow at the Capital Research Center in Washington, D.C., where he worked for 12 years. Vadum is also author of Subversion Inc: How Obama’s ACORN Red Shirts are Still Terrorizing and Ripping Off American Taxpayers (WND, 2011) and Team Jihad: How Sharia-Supremacists Collaborate with Leftists to Destroy The United States (Center for Security Policy Press, 2017). His personal website is matthewvadum.com, and his email address is matthewvadum@gmail.com.