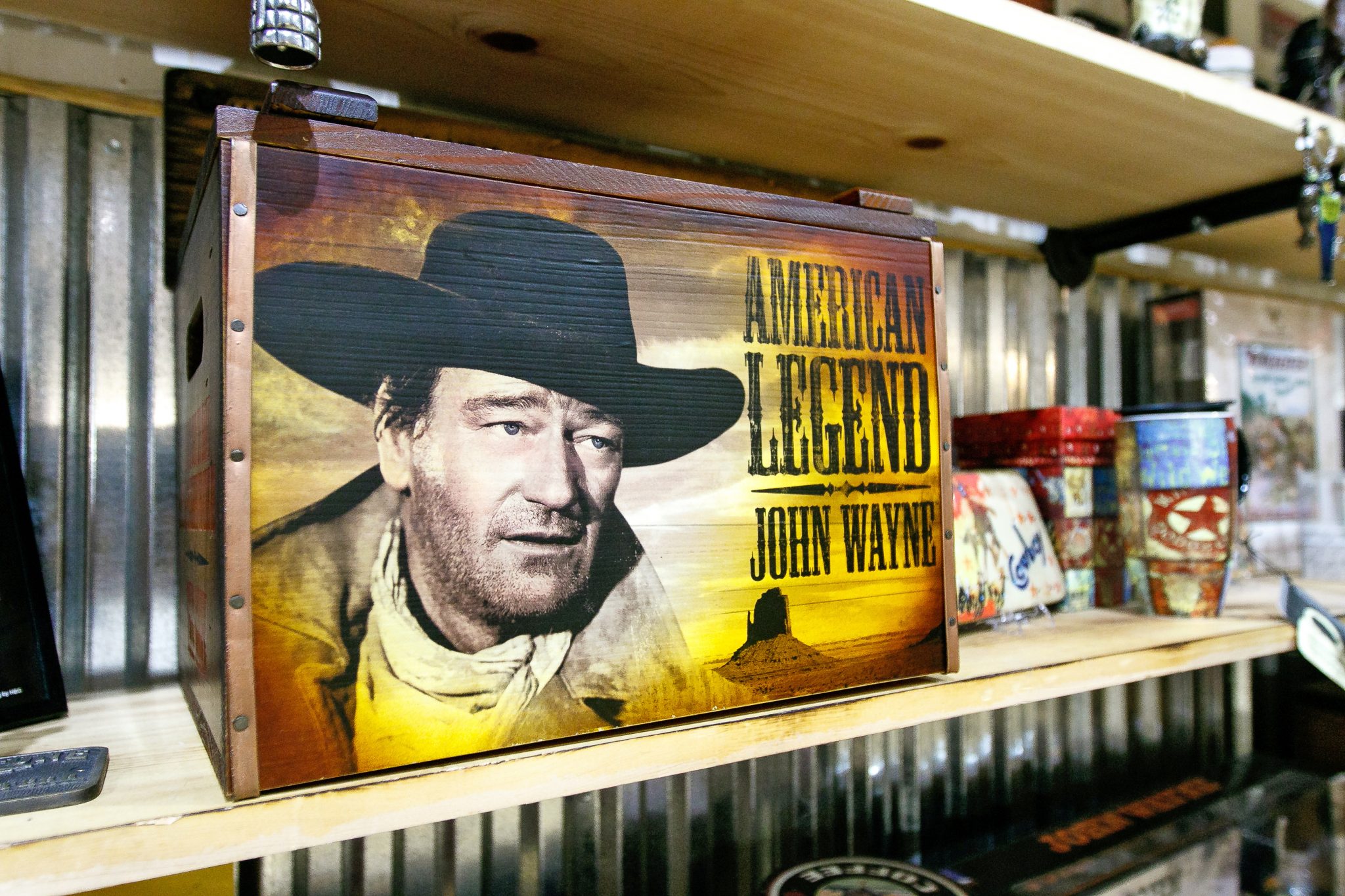 I feel sorry for the metrosexual Democrats pushing to rename John Wayne Airport in Orange County, California. They’ve probably never seen a John Wayne picture, or, if they have, they doubtless shriveled up before the ultimate icon of American manhood. That image is what they’re desperate to erase, so they’re now using some racially ignorant remarks the beloved star made in a Playboy interview half a century ago as an excuse to cancel him. But being utterly insignificant people, they have no idea who they’re dealing with, even 41 years after his death.

In Hondo, the Duke famously teaches a boy to swim by tossing him in a pond. It’s the kind of lesson that would benefit today’s progressive snowflakes.

Before I clue them in, I’ll address Wayne’s catalytic statement without excusing it: “I believe in white supremacy until the blacks are educated to a point of responsibility. I don’t believe in giving authority and positions of leadership and judgment to irresponsible people.” Wayne said these foolish words at age 64 in 1971, the year of the East L.A. riots and several others. Like many old white men of the time, he had a patronizing, though not hostile, view of black people. Blacks were always depicted with dignity and strength in his films, such as The Horse Soldiers (1959, Althea Gibson), The Alamo (1960, Jester Hairston, directed by Wayne), The Man Who Shot Liberty Valance (1962, Woody Strode), The Green Berets (1968, Raymond St. Jacques, directed by Wayne), The Cowboys (1972, Roscoe Lee Browne), and The Shootist (1977, Scatman Crothers). But his statement left a deep enough gash for the howling hyenas of the modern Left to attack him.

John Wayne was born in the heartland, Winterset, Iowa, in 1907, and nicknamed “Duke” after his dog. While attending USC on a football scholarship, he got a summer job as a silent movie prop man for cowboy star Tom Mix in Hollywood. There he met already esteemed director John Ford, who took a liking to Duke and put him in bit parts until 1939. Defying studio panic, Ford cast the unknown Wayne as the male lead, the Ringo Kid, in his revolutionary Western Stagecoach, giving him arguably the greatest film entrance of all time.

Thanks to Stagecoach, Wayne was a huge star when Pearl Harbor happened. He planned to enlist along with many of his peers (Gable, Fonda, Power, Stewart) but his minor studio, Republic, submitted a 2-A occupational deferment on him to keep their only A-lister working. Lack of service became a permanent topic of scorn for Wayne by liberals who wouldn’t fight if Chinese storm troopers goose-stepped up Rodeo Drive. Yet on film, Wayne boosted the nation’s morale and military recruitment far more than he ever could have as a soldier, winning World War II in Flying Tigers, The Fighting Seabees, Back to Bataan, and They Were Expendable.

In subsequent work, Wayne played nobler but still accessible all-American men whom boys could look up to and whom girls could admire, with one classic exception — The Searchers. Worldwide audiences were drawn to the Wayne persona that shone through such memorable films as Fort Apache (1948), She Wore a Yellow Ribbon (1949), Sands of Iwo Jima (1949), Flying Leathernecks (1951), The Quiet Man (1952), Island in the Sky (1953), Hondo (1953), Rio Bravo (1959), The Alamo (as Davy Crockett), and The Man Who Shot Liberty Valance. In Hondo, the Duke famously teaches a boy to swim by tossing him in a pond. It’s the kind of lesson that would benefit today’s progressive snowflakes.

I remember my girlfriend Cindy telling me about once watching The Man Who Shot Liberty Valance with an unsuccessful suitor, Warren. In the film, John Wayne’s character, Tom Doniphon, witnesses his longtime girlfriend Hallie (Vera Miles) cozying up to the protagonist played by James Stewart. Tom silently withdraws without the couple seeing him, gets drunk, rides out to the cabin he hand-built for himself and Hallie, and burns it to the ground. “God!” Warren exclaimed. “I wish I could be like that.” His was the kind of response to Wayne’s traditional masculinity that still spawns fear and loathing among feminists, especially the pitiable male of the species.

Wayne’s popularity thrived even in the turbulent late ’60s, when tough, confident men were challenged on screen by shaky, self-doubting protagonists like The Graduate (1967), Easy Rider (1969), and Midnight Cowboy (1969). He triggered Vietnam War opponents, many in Hollywood, by producing, directing, and starring in The Green Berets, and making it a hit.

The Duke had one of his most memorable roles in 1969, Rooster Cogburn, the hard-drinking, hyper-macho, one-eyed lawman of True Grit, which earned him the 1970 Academy Award for Best Actor. In one of those symbolic ironies, Wayne won over Dustin Hoffman for Midnight Cowboy and accepted the Oscar from Barbra Streisand.

Wayne continued to work into the ’70s, and famously turned down the role of Dirty Harry, much to fellow Republican Clint Eastwood’s luck. He made two superb Westerns during the decade, Big Jake (1971) and his moving swan song, The Shootist (1976). By that time, the cancer he beat in the early ’60s terminally resurfaced. He met it courageously, and helped found the invaluable John Wayne Cancer Institute.

This is the man progressives believe they can erase by renaming a little airport. But they’ll learn what the bad guys in Big Jake keep discovering about him. “I thought you were dead,” several say. “Not hardly,” he replies.