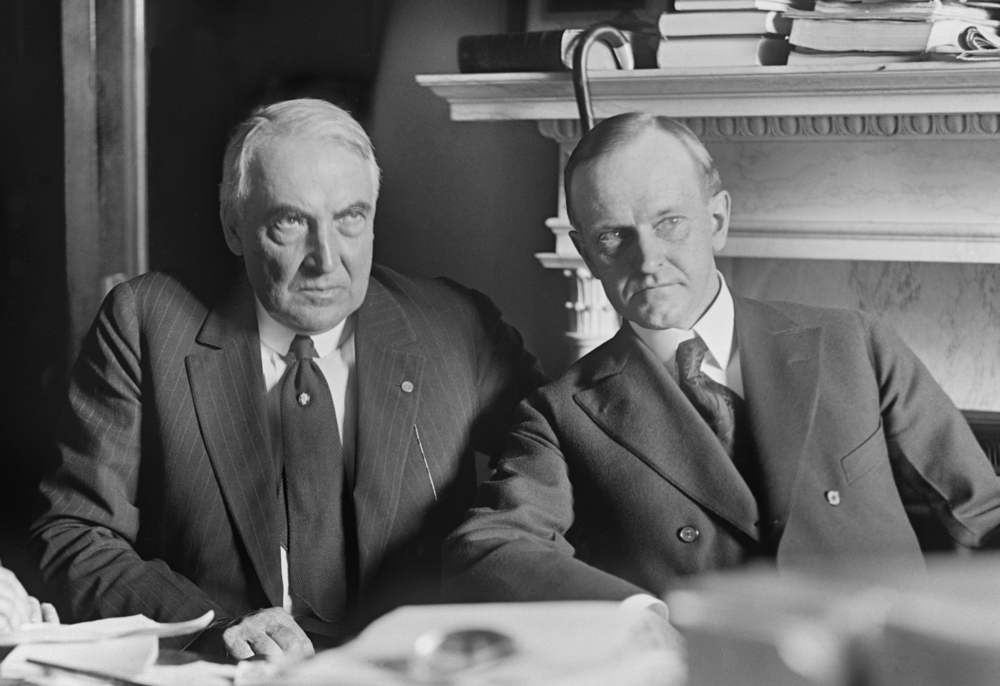 Washington — I see that President Calvin Coolidge is in the news, along with his sidekick Warren Gamaliel Harding. Warren was a mediocrity’s mediocrity and was long held to be the worst president of modern times. That was until Jimmy Carter became president and then Barack Obama, and now Joe Biden. After Joe’s term I think we shall retire the trophy.

President Coolidge became president on August 2, 1923, with the passing of President Harding, who was thought to be in perfect health or at least not near death. Now Coolidge is about to be restored to his former stature as a leading practitioner of conservative values, and Harding with him. I think restoring Harding is a bit of a stretch. He left in his wake a string of adulterous affairs and a trail of empty Bourbon bottles. I have that from Arthur Krock, the late bureau chief of the New York Times — and by late I mean he expired 48 years ago. He once told me that he and Warren “slayed a bottle of Bourbon” in Warren’s room at the Willard Hotel during World War I. I have not forgotten. Warren was undoubtedly a lot of fun, I am sure, but I am not so certain that he was a practitioner of conservative values.

What Continetti and his colleagues do not recognize is how much animosity this taciturn president stirred up.

Coolidge was, for a certitude, and now a group of scholars led by Matthew Continetti is making an attempt to hold his presidency up as an exemplar for conservatives to rally around in this era of wanton spending and breathtaking inflation. Cal was for balanced budgets, limited spending, and smaller government. If he knew about the course of spending’s growth during the entire postwar period, he would keel over. I studied Cal while I was working on my master’s degree and found him admirable. Yet I am not sure how he would tackle our catastrophic decades-long spending spree. I am reminded that in the aftermath of World War I he was roundly denounced by the New Deal historians for dismissing the Europeans’ debt to us only by saying, “They hired the money, didn’t they?” It took FDR to retire their indebtedness.

Cal was known for his pithy pronouncements, and I have just quoted one of them. What Continetti and his colleagues do not recognize is how much animosity this taciturn president stirred up. I recall in the late 1970s a confrontation I found myself in with a renowned constitutional scholar over Silent Cal’s supposed heartlessness. The prof began his class by enunciating choice specimens culled from the Coolidge credenda. He said with theatrical solemnity, “The business of America is business” — a bemused response from his audience. Then the prof said, “Inflation is repudiation” — more bemusement from his young audience. Nor did he forget this response to a famous public labor strike: “There is no right to strike against the public safety by anybody, anywhere, anytime.”

Now I agree with President Calvin Coolidge that our budget is overblown. We would be in better shape financially if we kept a lid on spending. We should have learned from our last bout with inflation. Inflation endangers far more areas of public life than mere finance. But there is a problem with limiting government growth, and it is reflected in Continetti’s project. America is leading the free world. It cannot simply abscond from the world into an isolated America, and as long as we are in the position of leading the free world the pressure on the budget will be continual. How can we limit the growth of our budget and keep the world safe?

And while thinking about our budget and the world, let us end this column once again with the exhortation “Glory to Ukraine,” and glory to my friend Boris Johnson and the courage he showed in visiting Ukraine over the weekend.