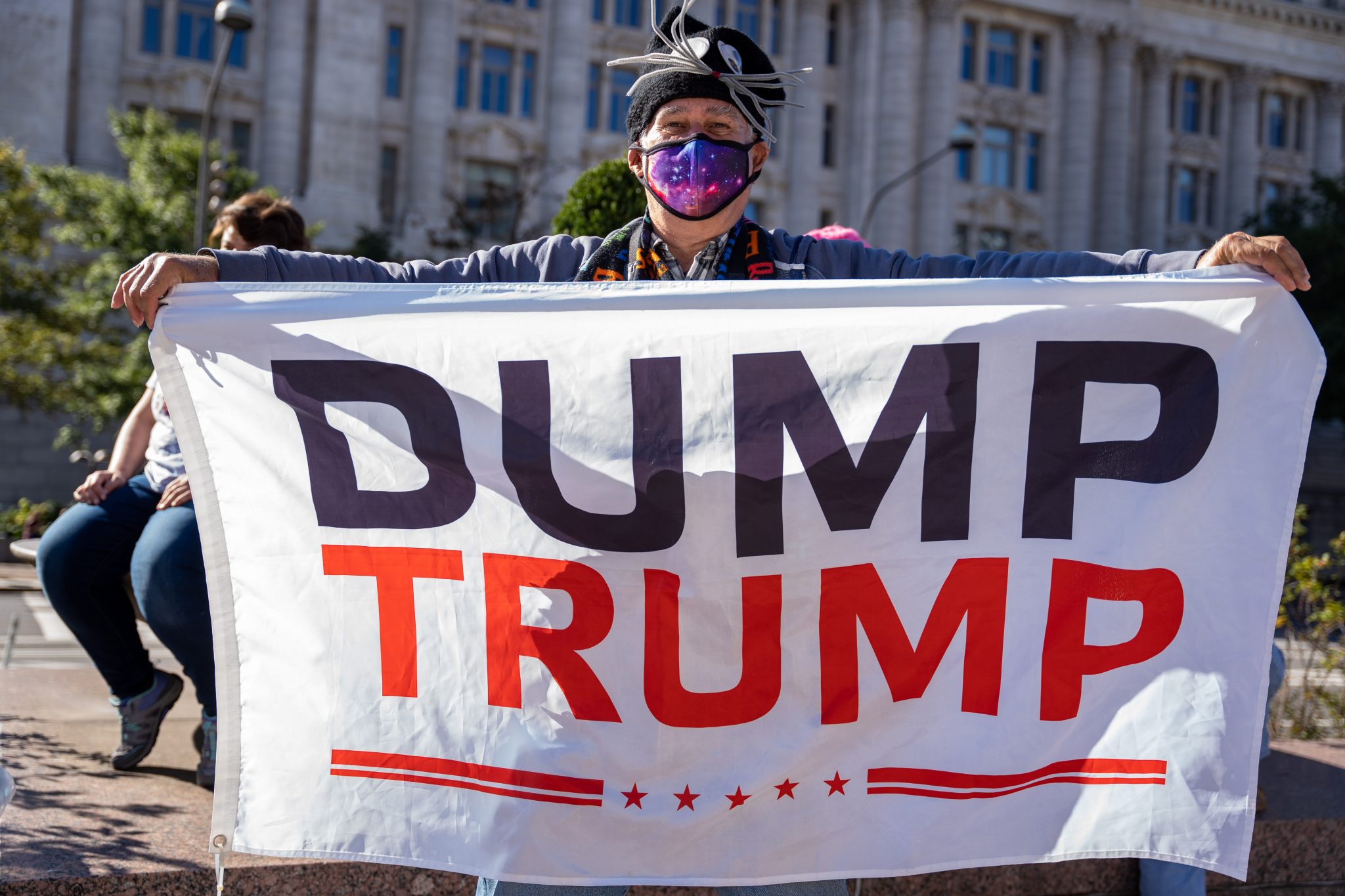 As Ronald Reagan might say, there they go again.

The “they” this time round is — yet again — Establishment Republican elites who cannot abide the idea that an outsider to their club has the support of the party’s base. I say “yet again” because, of course, this is a recurring tale in the Republican Party.

This time they go by this title:

A Call for American Renewal

Here’s the headline from Fox News:

The letter was spearheaded by former GOP intelligence policy strategist and 2016 independent candidate for president Evan McMullin and Miles Taylor, who served as chief of staff at the Department of Homeland Security during the Trump administration….

In an interview with Fox News, he [McMullin] emphasized that “in the light of Liz Cheney’s sacking from House leadership and the rise in extremism in the Republican Party, we collectively believe it’s important to articulate an alternative principals-based [sic] vision for leadership of the party and of the country.”

Over at the New York Times was this headline the day before:

Over 100 Republicans, including former officials, threaten to split from the G.O.P.

That story reported this, bold print for emphasis supplied:

More than 100 Republicans, including some former elected officials, are preparing to release a letter this week threatening to form a third party if the Republican Party does not make certain changes, according to an organizer of the effort.

The statement is expected to take aim at former President Donald J. Trump’s stranglehold on Republicans, which signatories to the document have deemed unconscionable.

“When in our democratic republic, forces of conspiracy, division, and despotism arise, it is the patriotic duty of citizens to act collectively in defense of liberty and justice,” reads the preamble to the full statement, which is expected to be released on Thursday.

The effort comes as House Republican leaders are expected on Wednesday to oust Representative Liz Cheney of Wyoming from their ranks because of her outspoken criticism of Mr. Trump’s election lies.

“This is a first step,” said Miles Taylor, an organizer of the effort and a former Trump-era Department of Homeland Security official who anonymously wrote a book condemning the Trump administration. In October, Mr. Taylor acknowledged he was the author of both the book and a 2018 New York Times Op-Ed article.

“This is us saying that a group of more than 100 prominent Republicans think that the situation has gotten so dire with the Republican Party that it is now time to seriously consider whether an alternative might be the only option,” he said….

“I’m still a Republican, but I’m hanging on by the skin of my teeth because how quickly the party has divorced itself from truth and reason,” Mr. Taylor said. “I’m one of those in the group that feels very strongly that if we can’t get the G.O.P. back to a rational party that supports free minds, free markets, and free people, I’m out and a lot of people are coming with me.”

Hmmm. Where have we heard baloney like this before?

Oh yes. It was when Ronald Reagan made his national debut in politics, first as a candidate for governor of California and then as a potential GOP presidential candidate once elected governor. Here’s what the Miles Taylors, Evan McMullins, and others of the day — both in the media and the GOP Establishment — had to say about Reagan and a potential Reagan presidential candidacy:

Thus spoke the Miles Taylors and Evan McMullins and various elected Republicans in the GOP Establishment and media of the day.

One assumes that many if not all of the signers of this anti-Trump letter voted for Joe Biden in the 2020 election. Which means that as America slides into one Biden-created crisis after another — chaos at the border, the Carter-esque rise of inflation and gas lines, with chaos in the Middle East added in — these “Republicans” need to be held as accountable for this dangerous mess as Joe Biden himself.

And what of the document these Never Trumpers have put forward? Over in the Washington Post several of the signers wrote an op-ed titled

The GOP has lost its way. Fellow Americans, join our new alliance.

They start by endorsing the Really Big Lie that there was no voter fraud in the 2020 election. As I have detailed previously in The American Spectator, right here and here, in my home state of Pennsylvania alone there was outright, televised evidence of shenanigans, with observers literally forced to use binoculars to do their job as observers.

Former Pennsylvania Congressman Dent of all people should know that our state repeatedly has had to deal with voter fraud. Just last year there was this headline in a news release from the United States Attorney for Eastern Pennsylvania:

That would be ex-Philadelphia Democratic Congressman Michael “Ozzie” Myers.

And two months earlier there was this headline in the Philadelphia Inquirer:

These are but two vivid examples of outright voter fraud in a state with a long history of it. And with all of that and so much more on the record, this group, stunningly, says this, bold print for emphasis supplied:

Tragically, the Republican Party has lost its way, perverted by fear, lies and self-interest. What’s more, GOP attacks on the integrity of our elections and our institutions pose a continuing and material threat to the nation.

Say what? It’s Republicans who are engaging in “attacks on the integrity of our elections.” Really? Really?

Then the op-ed writers say this:

We will fight for honorable Republicans who stand up for truth and decency, such as Liz Cheney, Adam Kinzinger, Lisa Murkowski and Mitt Romney, to name a few.

One doesn’t know whether to laugh or cry at that list.

The people named on that list are exactly the heirs of all those Establishment Republicans of Reagan’s day who were wailing and moaning about Reagan being an extremist or worse. In fact, Mitt Romney’s father, then-Michigan liberal GOP Gov. George Romney, went out of his way to attack the 1964 GOP nominee, conservative Arizona Sen. Barry Goldwater, even refusing to appear on the same platform with Goldwater when he campaigned in Michigan. Like father, like son.

In 1980, the Liz Cheney predecessor as chair of the House Republican Conference was liberal Illinois Republican Congressman John Anderson. Anderson ran in the Republican presidential primaries that year along with a small fleet of prominent Republicans. All were defeated by Reagan.

But as with Liz Cheney and the signers of today’s Call for American Renewal, Anderson was not about to sit back and go along with the verdict of Republican voters. Thus it was that Anderson quickly declared his candidacy for president as an Independent — and as with Democratic incumbent President Jimmy Carter was steamrolled by Ronald Reagan in the fall, with Reagan winning a 44-state landslide.

But here is a telling bit from Anderson’s Wikipedia page of his third-party presidential campaign that sounds precisely like the Never Trumpers today:

Most of Anderson’s support came from those Liberal Republicans who were suspicious of, or even hostile to, Reagan’s conservative wing. Many prominent intellectuals, including All in the Family creator Norman Lear, and the editors of the liberal magazine The New Republic, also endorsed the Anderson campaign. Cartoonist Garry Trudeau‘s Doonesbury ran several strips sympathetic to the Anderson campaign. Former First Lady Jacqueline Kennedy Onassis, actor Paul Newman and historian Arthur M. Schlesinger Jr. have also been reported as having supported Anderson.

Update for today and that is a precise description of the Never Trumpers in the Call for American Renewal. As with those liberal Republicans who were “suspicious of, or even hostile” to Reagan and his base in 1980 — not to mention for years and years leading up his 1980 election — so too are their political heirs as listed in that Post op-ed hostile to Donald Trump and his supporters.

In 1977, having lost the GOP nomination in 1976 to Establishment favorite Gerald Ford — with Ford then losing to Jimmy Carter — Reagan spoke at CPAC and answered his own GOP Establishment critics and those of his conservative supporters this way, bold print for emphasis supplied:

And let me say so there can be no mistakes as to what I mean: The New Republican Party I envision will not be, and cannot, be one limited to the country club-big business image that, for reasons both fair and unfair, it is burdened with today. The New Republican Party I am speaking about is going to have room for the man and the woman in the factories, for the farmer, for the cop on the beat and the millions of Americans who may never have thought of joining our party before, but whose interests coincide with those represented by principled Republicanism. If we are to attract more working men and women of this country, we will do so not by simply “making room” for them, but by making certain they have a say in what goes on in the party. The Democratic Party turned its back on the majority of social conservatives during the 1960s. The New Republican Party of the late ’70s and ’80s must welcome them, seek them out, enlist them, not only as rank-and-file members but as leaders and as candidates….

We are not a cult, we are members of a majority. Let’s act and talk like it.

Every word of that could be spoken by Donald Trump today.

Which is exactly why the GOP Establishment types in the Call for American Renewal can’t stand either him or his supporters.

In other words, the real message of the Call for American Renewal is received — loud and clear. Or, put another way, the more things change with the GOP Establishment, the more they stay the same.

And it is recognized for being the same elitist, insider, class-driven, very old message that it is.