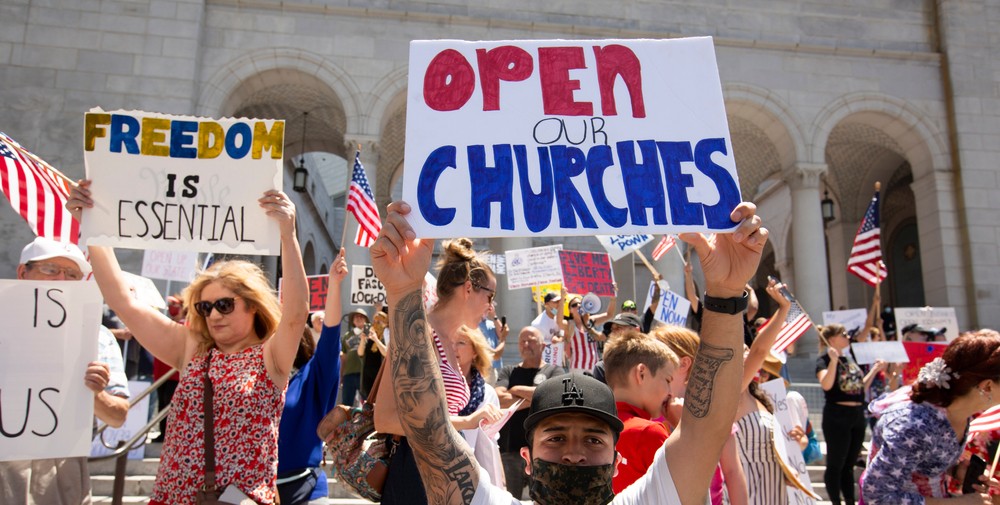 Some good news for believers on the Left Coast: another of California Gov. Gavin Newsom’s attempts to stifle religious expression for fear of COVID has been stricken.

On April 9, the U.S. Supreme Court, by a 5–4 vote, ruled that in-home religious gatherings in California, like Bible studies and prayer meetings, cannot be restricted.

The pastor of a Santa Clara County church and his parishioners, relegated to conducting worship services in private residences because pandemic-inspired edicts barred them from their church sanctuaries, asked the court to reverse the ruling of lower federal courts, including the Ninth Circuit Court of Appeals, while the case is being appealed. They claimed the state’s rules violated their First Amendment rights “by halting their weekly Bible and prayer sessions of up to 12 people.” The state had limited in-home gatherings to no more than three households (one of which consisted of the host household) while permitting indoor commercial enterprises far more leeway.

The SCOTUS majority must feel like it’s in a rut, and it seems none too happy about it; in fact, it saw fit to take a dig at the lower court in the ruling itself: “This is the fifth time the [Supreme] Court has summarily rejected the Ninth Circuit’s analysis of California’s COVID restrictions on religious exercise.”

A February ruling dealt with indoor worship services. Attorneys for a Chula Vista church complained that Californians could legally gather in retail establishments, like big-box stores, but, since the previous August, had not been allowed, due to virus restrictions, to worship corporately in a church or even go to confession or attend a prayer group numbering greater than five. The majority in this case, South Bay United Pentecostal Church v. Newsom, okayed indoor worship but capped the proceedings at 25 percent capacity — the limit for commercial establishments — and upheld a ban on singing and chanting.

The ruling in Tandon v. Newsom, handed down April 9, extends the same principles to in-home conclaves. Intoned the petitioners: the three-household limit “does not permit an individual to gather with others in her own backyard to study the Bible, pray, or worship with members of more than two other households, all of which are common (and deeply important) practices of millions of contemporary Christians in the United States.” Californians “can sit for a haircut with 10 other people in a barbershop, eat in a half-full restaurant (with members of 20 different families), or ride with 15 other people on a city bus, but they cannot host three people from different households for a Bible study indoors or in their backyards.”

The minority, in a dissent written by Justice Elena Kagan, complained that the majority was interfering with state officials’ efforts to deal with the virus. As for the case itself, Kagan made the point of comparison in-home gatherings: Secular gatherings in homes are also limited to three households, she said. You can’t legally have three couples over for Bunco night or your Amway sales presentation but only two, so why should you be permitted to bring members of three other households over for Bible study? Fair is fair. “If the State also limits all secular gatherings in homes to three households, it has complied with the First Amendment,” Kagan wrote. “And the State does exactly that: It has adopted a blanket restriction on at-home gatherings of all kinds, religious and secular alike.”

In addition to sending a warning message to governors quick to pen emergency executive orders on the virus, the Tandon ruling offers hope for the fate of religious liberty in the future. The court’s action here applies to cases far beyond pandemic legislation. One takeaway from the ruling that bodes well for the religiously active is the idea that any law that treats comparable secular activity more favorably than religious exercise triggers strict scrutiny, which means it has to be “justified by a compelling governmental interest and must be narrowly tailored to advance that interest,” a stipulation few laws satisfy.

This clarification is crucial because legislators often carve out exceptions for secular interests. For instance, the Obamacare birth control mandate exempted employers offering insurance through grandfathered plans, but not employers such as the Little Sisters of the Poor or Hobby Lobby that held religious objections to providing insurance coverage of birth control or abortifacients. The reasoning of Tandon, however, suggests a majority of the Supreme Court would conclude that the Obamacare birth control mandate would violate the Free Exercise Clause since comparable secular activity — businesses offering grandfathered plans — received more favorable treatment.

The attacks on religious liberty during this pandemic have been severe. In many states all manner of business ventures have been afforded more leeway than religious groups. Casinos, bars, and tattoo parlors are opened but church services are too dangerous to permit — you know, all that singing (and spraying) and collection-plate passing. Required to worship virtually, or consigned to drive-in services, churches have seen their ministries suffer. And when they have been allowed to resume activities, a host of restrictions are placed on them.

The irony here is as thick as the early June marine layer.

As it is in seemingly everything else, California has been at the forefront of religious innovation, style, and openness. For decades it was the hot lava core of religious ferment, the premier let-every-spiritual-flower-bloom location in America, if not the world. Jesus people hauling hundreds, even thousands, down to the ocean for mass baptisms — it happened in California. Contemporary Christian music was pretty much invented here (Larry Norman, “father of Christian rock,” got his start at Chuck Smith’s Costa Mesa Calvary Chapel). Great, massive conservative Christian movements were born here, like Campus Crusade for Christ and Focus on the Family. Some of the region’s churches are instantly recognizable the world round: Saddleback Church, Hollywood Presbyterian, the Crystal Cathedral, going all the way back to Aimee Semple McPherson and Angelus Temple. Add the Azusa Street Revival, the charismatic movement (born at St. Mark’s Episcopal Church in Van Nuys), Vineyard Fellowship — all bear a Southern California postmark. The church growth movement came out of Fuller Seminary in Pasadena. Your blue-jean-clad, huarache-shod longhair youth pastor strumming his guitar on the chancel steps pretty much screams Southern California.

And now it is arguably the most religiously repressive state in the Union.

But relief might be on the way. Gov. Newsom might be getting the message. It was announced last week that restrictions on religious gatherings in California, on account of “recent judicial rulings,” would be lifted.