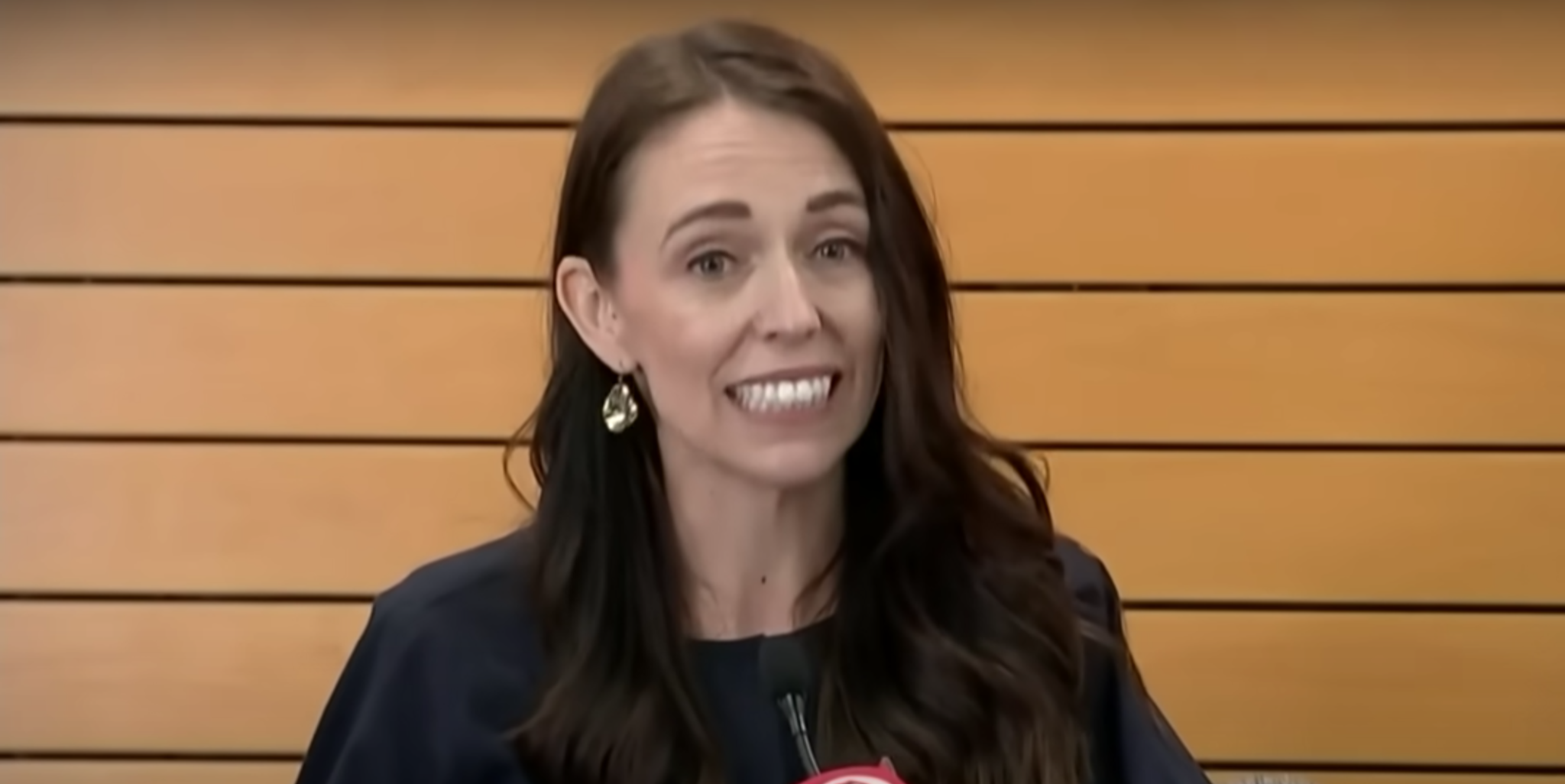 Jacinda Ardern, the control-freak prime minister of New Zealand who transformed one of the freest countries on the planet to an Orwellian one during the COVID crisis, announced on Wednesday her resignation effective sometime in the next few weeks. Her absence from the World Economic Forum to go around now makes sense.

Ardern has been a darling of the global socialist set for five-plus years since getting herself elected PM in New Zealand, which was predictable. She was a young, pretty, emotive leftist dripping with unrealistic idealism, and they latched onto her as though she was a white female Barack Obama from Down Under.

Which is why she graced the covers of Vogue and Time without ever really doing anything other than spouting progressive pieties and emoting charismatically for the cameras.

An insignificant, if breathtakingly beautiful nation like New Zealand was the perfect venue for the kind of heroine worship the international press loaded onto her; after all, New Zealand more or less runs itself, so it would be impossible for her to do damage sufficient to break the spell, right?

Ardern quit because the voters in New Zealand were increasingly enthusiastic about the prospect of firing her and her party is on the electoral ropes. And why?

If you think people here in America ran out of patience with the rough-and-tumble of Donald Trump’s time in office, it was nothing compared to the five years Ardern has run New Zealand.

There was a volcanic eruption on White Island, in the Bay of Plenty off the coast of the country’s north island in December of 2019, which killed 22 tourists and guides caught in the volcano’s crater when it blasted out a cloud of steam. Ardern’s government filed charges against 10 organizations and three people in the wake of those deaths, wiping out a popular tourism engine for the town of Whakatane probably forever. There’s a Netflix documentary about the eruption that is fairly hair-raising, but it obscures something that is a basic truth — anyone with a brain knows that walking into the crater of an active volcano is an incredibly dangerous thing to do and that’s what makes it so thrilling.

It’s a perfect case of “assumption of risk,” which is a long-standing tenet within the common law, but the emotive leftist Kiwi PM wasn’t having any of that. It’s more than three years later, and setting foot on the island still isn’t permitted.

Perhaps that reaction was defensible. But then there was Ardern’s reaction to the March 2019 atrocities in Christchurch, when a xenophobic loon shot up a couple of mosques in that town, killing 51 people and injuring another 40. Ardern showed up to comfort the victims, quickly donning a headscarf — not that doing so was over the top or anything — and called it a “spontaneous” gesture of respect for Islam.

And then immediately after, she pushed through an “assault weapons” ban, and then launched a campaign against online “hate speech.”

You might be starting to get the picture here. If it’s beginning to sound like Gretchen Whitmer on steroids, we’re just getting rolling.

I forgot to mention when Ardern really began tugging at the heartstrings of the global socialist media. That came in 2018, when she showed off her then-3-month-old baby at the United Nations. It turned out that she wasn’t married to the father of said child; something which was passed off as a perfectly normal circumstance for the leader of a country to be in. Ardern said that a marriage to her “partner” Clarke Gayford, a TV news anchor, was in the offing, but kept putting it off.

In fact, she closed her remarks at Wednesday’s resignation by telling Gayford, “Let’s finally get married!” How touching.

Let me rephrase that: Everybody in New Zealand had to put their lives on hold because of Jacinda Ardern’s insane overreaction to COVID.

She shut down the country’s borders in early 2020 when New Zealand had a grand total of 25 deaths among a population of five million. Those borders didn’t reopen until August of last year. She also instituted sweeping mask and vaccine mandates, locking the country down to such an onerous extent that the global media held her out as a model for international virus policy.

“Stay local,” she said, a concerned Karen look on her face. “Do not congregate. Don’t talk to your neighbors. Please keep to your bubbles.”

And New Zealanders, to their shame, ate the narrative up to such an extent that Ardern won a big victory in the October 2020 elections, which ushered in a big Labour Party majority and let her govern largely unrestricted by opposition.

At that point, her overreactions were mistaken for decisive leadership.

So she brought in the stupid leftist economic policies everybody expects, and things went to seed very quickly.

Ardern’s government has spent its time pandering to the Maori indigenous community, which is one-sixth of the population but seemingly the majority of her focus in domestic policy. She led a formal apology to the Maori for the historic wrongs done to them by the English settlers in that country, wore a Maori cloak to meet Queen Elizabeth II in 2018, and set up a separate government healthcare system just for the Maori. Now, the Maori are demanding one of their own be the next PM; who can blame them after being pandered to so completely by this white woman from town?

The overweening government in New Zealand and the crackdown on the law-abiding has had predictable results. Crime is out of control there, with shops routinely pillaged by looters who know nothing will happen to them, inflation is at a 60-year high, and the economy lies in ruins thanks to Ardern’s having outlawed tourism for more than two years. Her popularity cratered, something which became clear when loud protests started cropping up in front of government buildings, including an especially noteworthy one in February of last year that lasted four weeks. Demonstrators camped out on the grounds of Parliament in Wellington, the capital, denouncing the mask and vaccine mandates and demanding she meet with them. Instead, more than 120 were arrested.

After the government squelched the in-person protests, the dissent moved online and turned more vitriolic. Ardern’s government continued overreacting, declaring security threats and cutting back her personal appearances. Meanwhile the economy continued to drift and her popularity continued to decline, and finally on Wednesday, the game was clearly over.

Ardern gets credit for recognizing when to fold ’em. Although it seems fairly obvious, her own party had made her very aware of the public’s hardening verdict on her tenure.

Incidentally, there was this at the moment she threw in the towel…

Not really; that’s a joke. The real reactions among the folks in New Zealand were slightly less jubilant. Slightly.

Even though I was branded a traitor, I have no regrets for speaking out against Ardern.
I hope and pray New Zealand is able to re-embrace freedom of the press, tolerance for bodily autonomy and the right to always return home now the Be Kind tyrant‘s gonepic.twitter.com/67z49d2ZlU

So instead, she’s now a political martyr. Helen Clark, a former PM who could be described as a “not-so-pretty communist” owing to her own leftist record in office, trashed Ardern’s critics and blamed them for driving her out of office:

“I’ve seen the public pressures of vitriol and mouthing against Jacinda in a very, very unfair way and at some point, as she said, you’re human, at some point you don’t have any gas left in the tank, and she’s made the call that is absolutely right for her and her family.”

While Clark faced a huge amount of unpleasant criticism during her nine years as prime minister, she told Morning Report social media had given it more licence.

“The amount of anonymous trolling and venomous commentary is absolutely ghastly.

“I was going through the responses to the tweet I put up and the hate brigade is out in force, the anti-vaxxers, the people calling Jacinda a dictator, really just extreme and absurd language.”

In Clark’s time, talkback radio was the dominant outlet for people to express hateful views, but there was not the “24-hour trolling and viciousness on social media”.

Clark said she considered herself lucky to have led the country before the advent of social media which had made the role so much tougher.

Right, lady. Life’s difficult. It’s even harder when you suck.

Oh — and by the way, Helen Clark made those remarks from … Davos. Because of course she did.

We’ll probably see Jacinda Ardern again. The same global media who inflicted her on us will no doubt find ways of continuing to do so. She’s only 43, and it’s inevitable that they’re going to try to elevate this overemotional, jumped-up leftist mediocrity beyond the touch of the voters who missed the chance to reject her this fall.

None of which changes the fact that she’s one more neocommunist failure who couldn’t respect the rightful limits on government power and ran her country aground.

One of the better scenes in modern motion picture history came from the 1995 comedy Friday, in which a pair of stoners from the Los Angeles ’hood played by Chris Tucker and Ice Cube dismiss an obnoxious and overbearing neighbor with a terse “Bye, Felicia” while she’s still in their presence.

Maybe now we can offer a Down Under/political appendage to that meme. Because “Bye, Jacinda” fits quite nicely.