Will Sunday afternoon football fans ever see an NFL player wearing a Blue Lives Matter jersey? Sure they will. The day after they spot a Volvo with a gun rack.

Here’s another question, suitable for the next office pool or pub quiz: Can you name three things in America the political and cultural Left hasn’t badly damaged, taken the fun out of, or totally ruined?

All right, I hear your objection, and it’s sound. I’ve set the bar too high. OK, name one thing. Still a challenge. Perhaps there’ll be no winner of this pool. An aggressive and intolerant Left has marched, inexorably, through our institutions, taking them down seriatim, leaving their forms standing but refiguring and debasing their content, in the manner of ideological body-snatchers.

It took a good while for the Left to capture sports, or at least to badly infect them. Other institutions were less of a challenge. Academe, always a flakey precinct, was easy. The professoriate, merely dotty before the revolution of the Sixties but possessing no BS immune system, morphed with barely an objection into the leftist political red-hots of today. There is no more intellectually incoherent, monolithic, and intolerant space in the republic than the college of liberal arts at the local university. The contagion spread from the campus, taking down entertainment, the mainstream media, museums, public schools, law, book publishing, corporate America, and even, God help us, much of the clergy. The far Left now has sole ownership of a major American political party. It even bagged a pope. 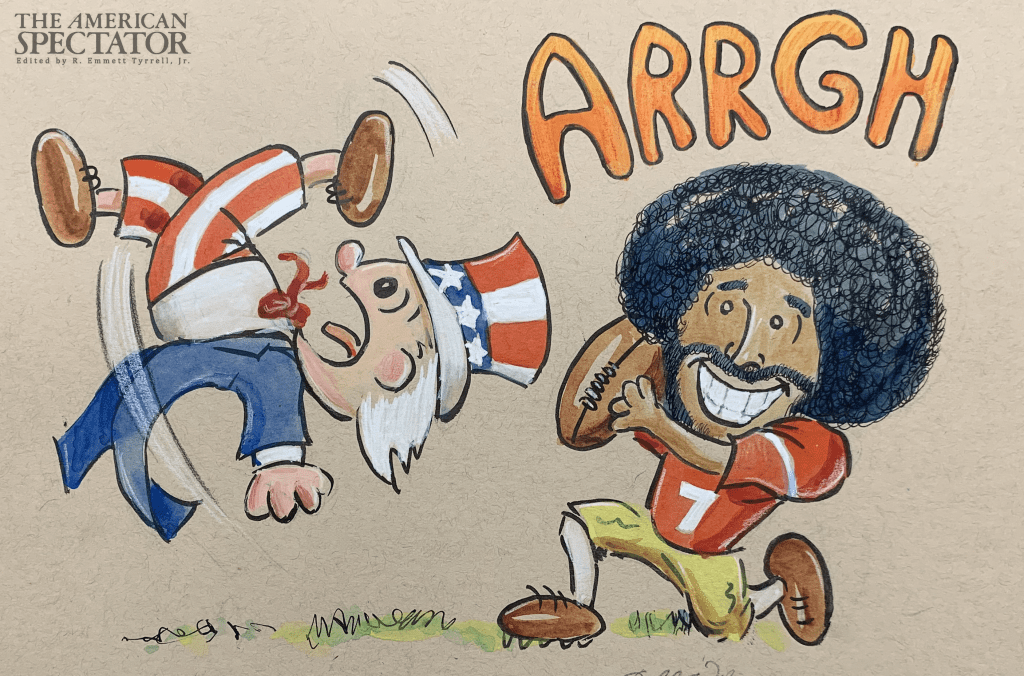 Sports were a more difficult project, being as they’ve been the home of hearty, country-loving patriots, many of these of the conservative persuasion. A majority of lefties have preferred computer games, organic gardening, yoga classes, and psychotherapy to Monday Night Football. But the Left finally has established a firm beachhead in professional sports. Common sense still mostly prevails at the amateur level. I’ve not seen a Black Lives Matter banner at a Little League game yet. But it’s early days, and we all know what rolls downhill.

The NFL, MLB, and NBA are now adjuncts of Black Lives Matter, complete with banners, sweatshirts, and sappy and misleading television commercials. League executives have given no indication whether their loyalty is to the sentiment — which is unassailable but irrelevant, as no one ever said black lives don’t matter — or to the Marxist organization, which has a much more toxic agenda than racial peace and equity. In fact, racial peace is the last thing BLM wants. It would put them out of business.

The price of attending or viewing one of these now-political leagues’ games, in addition to the usurious ticket or cable package tariff, is to see America insulted by kneeling athletes, indulged young prats whom America has made rich and privileged beyond their wildest dreams. Talk about biting the hand that over-feeds you.

For reasons too complex to plumb in this article, the corporate Big Feet who now own and control professional sports in America have either ignorantly or cynically signed on to the hoax and slander that America is a racist hell-hole, thereby making themselves allies to the revolution that has been ignited and fed by this lie. Lenin would call them useful idiots. I’ve a few names for them myself, but I’ll pass over these as this is a family publication.

An egregious example: On July 24, Opening Day of MLB’s sixty-game, asterisk season, the Tampa Bay Rays, which should be my team, tweeted, “Today is opening Day, which means it’s a good day to arrest the killers of Breonna Taylor.”

Let this one sink in. According to the social justice warrior executives at One Tropicana Drive, Louisville police officers who when fired on in the tragic cock-up that led to Breonna Taylor’s death should be arrested for returning fire. How many Rays fans accept the police-officers-doing-their-duty-are-criminals philosophy embodied in this brain-dead tweet? Then where’s the comfort level, not just in St. Petersburg and Tampa but across the sports spectrum, for fans who know very well that America is not systemically racist, and that the brutality on America’s streets is, with rare exceptions, perpetrated by criminals, not by police officers?

If what was once billed as “the national pastime” brings in a quarter of the viewers of a show about people finding old stuff in their attics, something is very, very wrong.

So readers can easily understand why this conservative Americano and Cat-5 sports fan has submitted his principled resignation from the world of sports, at least the professional kind. I urge other patriots to do the same. The biggest source of sports money comes from television. That means the only way fans can steer sports execs away from their current love affair with the race-baiting Left is to stop watching. If the plague ever withdraws, and stadium turnstiles can start turning again, fans can stay away from these as well. Abstinence, painful for those whose lives have been enriched by sports, is the most effective way to deliver the message.

I’ve not watched a pitch, a snap, or a shot since Big Sport caved to the mob. This breaks my heart as I’ve loved sports all my life. I’ve watched, played, cared about, read about, and talked endlessly about sports for seven decades. I’ve written about them for five. My early athletic exemplars had names like Stan Musial, Ted Williams, Rocky Marciano, and Bob Cousy. (I came along a tad late for Joe DiMaggio and Joe Louis.) But I’ve had to pull the plug. Otherwise I would feel like I was sleeping with the enemy.

Professional sports’ current genuflection to the Left’s race obsession is dangerous not only to the nation but to the future of professional sports itself. The games we love are a terrible mix with politics. Sports bring many satisfactions to both participants and viewers, not to mention disappointments, of course. I’ve written of these in this space for years now. But one of the many reasons Americans tune in to the games, or suit up themselves, is to escape, for a time, the many conflicts that roil us, including politics. Sports have been, and if the multi-billion-dollar sports industry is to survive must remain, a refuge from politics, not another forum for it. The last thing Joe Americano needs and wants on Sunday afternoon when he picks up his remote after a hard week’s work is political hectoring from ignorant athletes and league executives who consider themselves Joe’s betters. Joe just wants to watch the damn ball game! He doesn’t want to hear that LeBron James, when not busy playing kissy-kissy with Chinese communists, thinks he’s racist scum.

Pre-political sports, in addition to being entertaining, had unifying benefits. Every member of the community, regardless of occupation, education, social standing, or complexion, could agree on supporting the home team, living or dying as the team succeeded or failed. The hedge fund manager and the janitor, together on a long elevator ride, could chat amiably about yesterday’s game, if about little else.

But the easygoing and unifying charm of sports leaves the stadium when fans are nagged to declare on the tendentious political questions of the day. Currently fans are badgered to accept the whites-are-oppressors, blacks-are-victims narrative of the Left. The NFL went so far as to open games with a tune, “Lift Every Voice and Sing,” which some designate “the black national anthem.” This was played along with the “Star-Spangled Banner,” presumably now the white national anthem. Wow. Separate anthems for blacks and whites. How unifying is that?

I’m not alone in giving sports a bye because of politics. But it’s difficult, probably impossible, to say how many others have. Clearly viewership across all sports is down, especially for the NBA. This year’s NBA finals drew an average TV viewership roughly that of Dancing with the Stars and below the average for Antiques Roadshow. The first two games of MLB’s American League Championship Series between the Tampa Bay Rays and Houston Astros fetched the smallest viewership of any LCS games in history, the second game attracting a miniscule 1.88 million. If what was once billed as “the national pastime” brings in a quarter of the viewers of a show about people finding old stuff in their attics, something is very, very wrong.

There is indeed a lot wrong in today’s professional sports, much of it preceding the plague and on-field politics. Young people today are not developing an interest in sports to the degree of previous generations. There’s wildly overpaid athletes forcing wildly overpriced tickets to attend games. There’s the increasingly corporate nature of today’s sports. Many fans can’t even remember the name of the soulless corporation their hometown stadium is named after. And clearly sports executives have vastly overestimated their fans’ toleration of, let alone market for, woke politics on the field.

Will the folks who run professional sports finally recognize this and make corrections? I certainly hope so. Because, damn it, I want my games back. I want to be able to sing “Take Me Out to the Ball Game” again, and mean it.