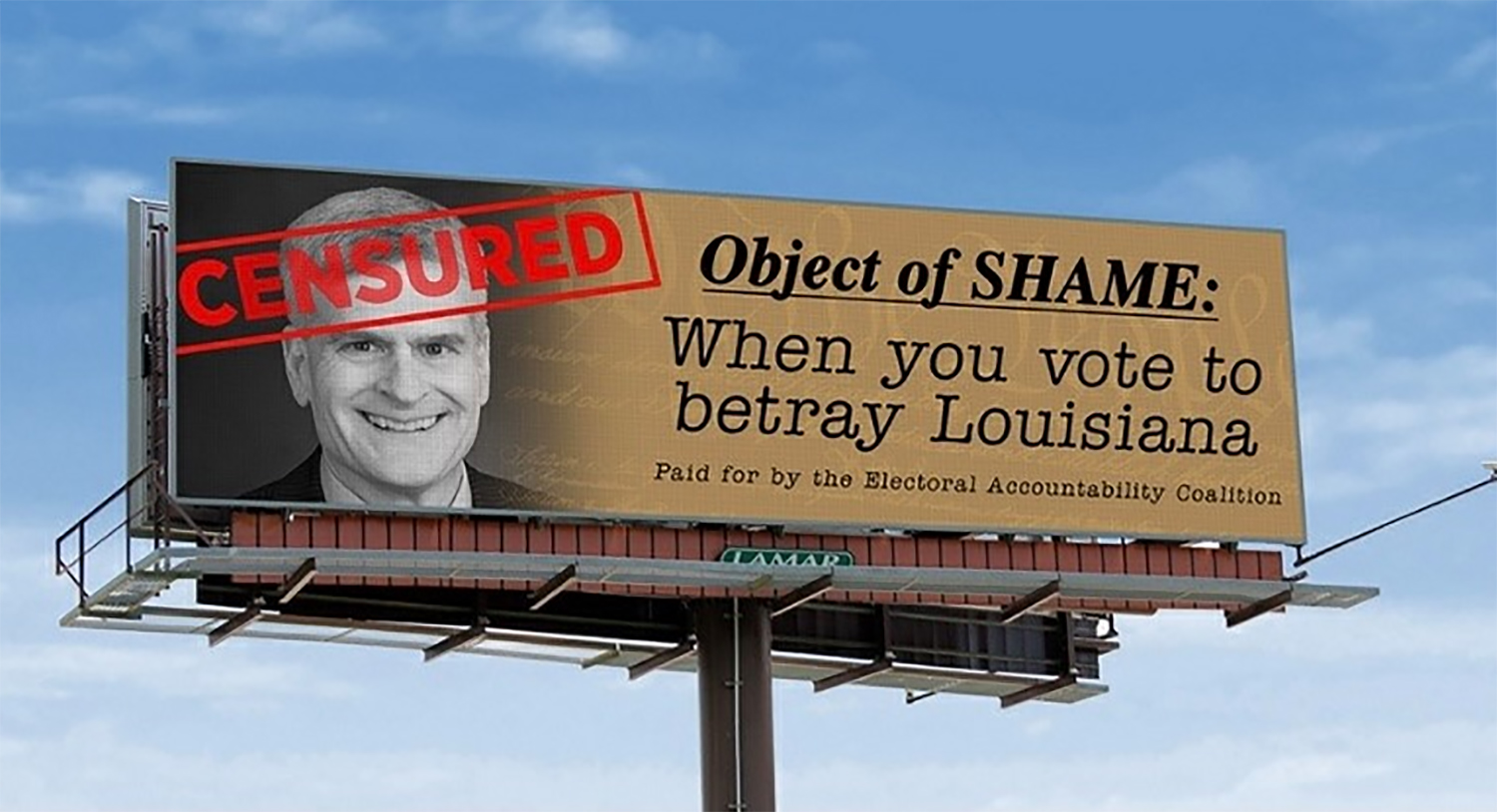 Bill Cassidy was on the ballot in Louisiana last November just as President Trump was. Cassidy managed a similar percentage of the vote in the Bayou State that night — 59 percent to Trump’s 58 percent.

But if you think Cassidy’s popularity back home corresponds to that of Trump, think again. Especially after Cassidy twice joined with the likes of Chuck Schumer and Mazie Hirono to validate the Democrats’ kangaroo-court post-presidential impeachment last month.

There are billboards all over Louisiana with Cassidy’s image and “OBJECT OF SHAME” in large letters, a reference to the characterization of Cassidy by the East Baton Rouge Parish Republican Party after his vote in favor of the impeachment trial’s constitutionality. His staff had all but given up answering the phone by the second week of February, so brutal and voluminous were the calls expressing outrage at his impeachment votes. The state GOP censured him with a savage statement following his vote to convict Trump.

It turns out Louisiana’s voters aren’t much for the kangaroos.

But Cassidy appears, somehow, undaunted by what most observers in the state believe was political suicide on Feb. 13. Since then he’s made himself as visible as possible, contrary to expectations. One would imagine the smart play after such a high-profile, unpopular act would be to lie low. Nope. Not Cassidy.

He’s begun pontificating about national affairs and is now opining as to the future of the Republican Party. And, unsurprisingly, he’s attacking Trump.

Boy, the folks back home will sure love this:

During an appearance Sunday on CNN’s State of the Union, Cassidy warned his party that if it does not shift its focus to the issues, GOP candidates will lose in upcoming elections. “Political campaigns are about winning,” Cassidy said. “Our agenda does not move forward unless we win. We need a candidate who can not only win himself or herself, but we also have to have someone who lifts all boats. And that’s clearly not happened over the last four years.”

Cassidy — one of seven Republican senators who voted to convict Trump of inciting the Jan. 6 insurrection at the Capitol — does not think Trump will be the 2024 GOP presidential nominee. He said Republicans need to connect with voters on “those issues that are important to the American people” if they want to win the 2022 midterms and 2024 presidential election, not worry about “putting one person on a pedestal and making that one person our focal point. If we idolize one person, we will lose. And that’s kind of clear from the last election.”

As I noted at my site Monday morning, there are three problems with Cassidy’s statements. First, Cassidy’s accusation that CPAC’s attendees and the rest of the MAGA voters out there are idolaters engaged in making a cult of personality from Trump is thoroughly off-base. Trump’s supporters aren’t under the illusion he’s some sort of messiah or that he’s flawless. Far from it — they’ve stipulated to Trump’s flaws from the get-go. Frank Miele, writing at RealClearPolitics, put it perfectly:

Trump is not a leader in the traditional sense of inspiring his supporters to believe as he does, but rather someone who gains his strength and power from his ability to reflect the beliefs of those whom he leads. If you want to know why I am a Trump Republican, it is because only Trump has consistently and effectively put into words the values and beliefs I was armed with long before he appeared on the scene. He hasn’t always been able to effectuate those values in policy changes, but I’m willing to forgive him his failures because he — like me — has been the victim of cultural and political elites who despise him. They have proven they would stop at nothing to bring him to his knees, so it was no surprise to me that they rigged the election against him by changing voting rules and then blamed him for the chaos that resulted….

That mistake has been repeated throughout Trump’s candidacy and presidency — over-estimating Trump’s persuasiveness and under-estimating the savvy of his audience. It wasn’t Trump who shaped the conservative movement in America, but rather the conservative movement that shaped Trump like Pygmalion into the political embodiment of heartland American values: free speech, law and order, good jobs, secure borders, equality but not equity.

If some fair-minded historian wants to make an honest attempt at writing the story of the Trump movement, that is where they should begin — with the understanding that Trump was called into being by necessity. His genius, if you will, was recognizing the spirit of the times and riding it into the White House.

Another way to put this is the failure of, as Ross Perot described them, “blow-dried” politicians like Bill Cassidy to maintain credibility and actively fight for the values and pocketbooks of regular Americans is what created Trump in the first place.

Cassidy won reelection, by the way, by gleefully riding Trump’s coattails. The Democrats put up a thoroughly hapless candidate, Shreveport’s disaster of a mayor Adrian Perkins, and Cassidy hadn’t yet done anything to attract a conservative challenger. He’ll certainly have one in 2026 if he runs for reelection then.

And if he does, he can be sure such a challenger will be a “CPAC” Republican. That’s likely to present Cassidy with an educational moment, because one of the other things he said, which showed him to be utterly out of touch with reality was that CPAC isn’t the Republican Party.

Anybody who doesn’t believe that what happens at CPAC doesn’t represent the active ingredient in the conservative movement without which there is no viable GOP is dangerously detached from reality. If you listen to people like Dana Bash at CNN, to whom Cassidy was prattling on during that Sunday interview, there is word of an internecine war on the right.

There is no such thing going on.

There are instead recriminations by the party’s voters against those rogue politicians within the party who chose to curry favor with the Beltway cocktail party set rather than listening to their constituents. The Bill Cassidys, Mitt Romneys and Liz Cheneys of the world are not the leaders of the Republican Party; in fact, few of them will even be in public office after they next face the voters. Romney admitted last week he represents a tiny minority within the party. And Mitch McConnell, who provoked a nasty war of words with Trump after attempting to straddle the fence on impeachment, was forced to admit that he would surely back Trump in 2024 were he the party’s nominee.

By the way, CPAC’s straw poll gave Trump only 55 percent as the party’s preferred nominee. Just about all of the conference’s attendees are full-on MAGA supporters, but nearly half are ready to find a 2.0 version of an America First standard-bearer — with Florida Gov. Ron DeSantis and South Dakota Gov. Kristi Noem as the early favorites for that role.

And if Trump doesn’t run in 2024, something Cassidy might well be right about despite the former president’s statements teasing he would on Sunday, it’s a virtual certainty that it’ll be Trump and not Cassidy or his like who plays kingmaker.

Cassidy said something else that was infuriating to most Republicans. He claimed the GOP’s policies were fine, but that losing the House, Senate, and White House in the last three elections was a reflection on Trump.

Who lost the House in 2018? Was it Trump, or was it the ineffectual Paul Ryan who left key parts of the president’s agenda on the table as House Speaker? And prior to the twin disasters in Georgia, for which Trump surely bears some responsibility (complaints about a rigged election, valid though they may have been, did depress GOP turnout for the January Senate runoffs), who’s responsible for losing the Senate? Why was Martha McSally the GOP nominee in Arizona after the voters rejected her just two years before? Was it Trump who cost the party Cory Gardner’s seat in Colorado, or was that the GOP establishment?

Yes, Trump and the establishment agreed on tax cuts. But it was Trump who shifted America’s Middle East policy and achieved peace deals. Prior to his coming along, we were in expanding military engagements in Near East hellholes without end, or American interest, in sight. It was Trump who recognized the deficiencies of our trade policies and the threat a hostile and manipulative China posed; the GOP establishment had been giving away the store to the ChiComs since Tiananmen Square.

So the policies are fine, but the guy who established them is not? So says Cassidy, who just voted to confirm as UN Ambassador Linda Thomas-Greenfield. Never mind that Thomas-Greenfield is a paid speaker at Confucius Institute propaganda centers on American college campuses, where she extolls the virtues of Chinese foreign policy.

All of it is gibberish. None of it will replace Trump and his supporters as the active ingredient in the GOP. And Cassidy’s statements prove he’s not the guy who will slay the Trump dragon and return function and comity to our national political discussion.

You have to wonder where this stupidity came from. Because other than face-planting a few years ago when he attempted to engage with the left-wing agitator Jimmy Kimmel on health care, Bill Cassidy has been a nondescript political figure showing no signs of being a Republican thought leader.

A friend who spent some time on Cassidy’s staff put it this way:

It is no secret to anyone from Baton Rouge that Senator Bill Cassidy really is the co-Senator from Louisiana, as his wife Laura influences his rhetoric, opinions, and how he votes. In that world Laura is the alpha, and Bill parroting her out of touch elitism is merely so he can have a good night of sleep. #HappyWifeHappyLife.

A lot of people back home have been whispering this for a long time. Now it’s beginning to be more than a whisper.

Which raises the question: if you’re not even the thought leader in your own household, Sen. Cassidy, how exactly are you going to hold down that job in the Republican Party?