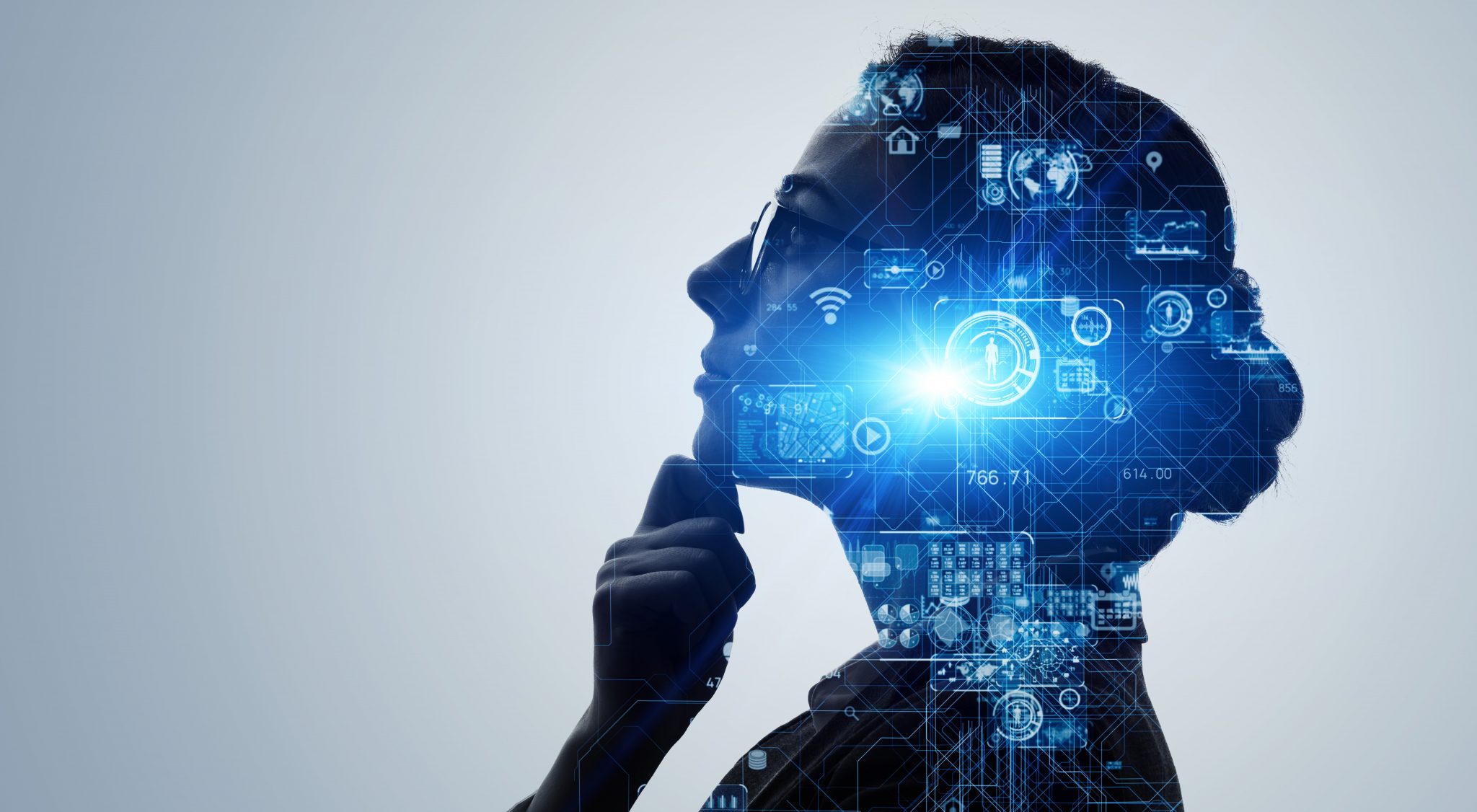 What Tech Calls Thinking: An Inquiry into the Intellectual Bedrock of Silicon Valley
By Adrian Daub
(FSG Originals, 160 pages, $13.50)

Richard Barbrook and Andy Cameron’s iconoclastic 1995 essay “The Californian Ideology” was the first stab at an intellectual history of the tech sector. Barbrook and Cameron described a worldview exuded by the likes of blazer-and-denim capitalists like Oracle’s Larry Ellison. This new digital elite held that technological improvement had thrust humanity onto a path of inevitable progress. So deterministic were they in their thinking that they would make John Calvin blush. At the same time, this new “digerati,” as some in the press called them in the early 1990s, articulated a self-aggrandizing anti-statism straight out of an Ayn Rand novel. The digerati were visible saints of a new order, clad in earth tones. They were John Galts with gadgetry. These romantic individualists planned to wipe the slate of mankind clean and provide Marshall McLuhan’s global village with ever more connective tissue, enabling everyone to lead gallant digital lives.

Adrian Daub’s excellent What Tech Calls Thinking provides a needed update to Barbrook and Cameron’s initial ideological rendering of the Silicon Valley crowd. The Stanford professor demonstrates both the significant continuity (see their technological determinism) and significant change (a move away from cultural libertarianism towards a more managerial view of society) in Big Tech’s ideological imperatives. Above all else, Daub shows that all the la-di-da talk of liberation and life as a work of art once articulated by the techies has become just talk, which may be all that it ever was.

The Randian pretenses remain in much of the tech sector, as Daub explains in detail. The likes of Wikipedia’s Jimmy Wales and PayPal founder Peter Thiel still speak in Rand’s “Virtue of Selfishness” vernacular. Certainly, one still hears more than mere echoes of The Fountainhead at TED Talks, Silicon Valley’s version of The Old-Time Gospel Hour. Every new disruptor and “thinkfluencer” is a Howard Roark, fighting for transparency and breaking down barriers of time, space, and superstition.

By the time the techies had the whip hand, though, the anti-statists had been replaced with a new cluster of venture capitalists whose ethos was closer to l’état, c’est moi. The generation of Thiel, Elon Musk, and Mark Zuckerberg have presented their assertion of financial muscle as world-historical “disruptive” and “destructive” forces — inevitable changes in the marketplace which not coincidentally correspond with the greater assertion of economic power and control by the entrepreneurs in question. These men are not revolutionaries in any sense, according to Daub. They are merely pirates within the existing economic order, taking advantage of gaps within the managerial state (think of Airbnb or Uber circumventing municipal regulations on lodging or taxi services) while shaping the state’s future means of management. At its core, Daub sees the intellectual architecture the tech sector has developed over the past two decades as a cloak for their pursuit of power and treasure.

Daub asserts that the titans of tech have spent little time sitting around reading Joseph Schumpeter and René Girard, despite the evident influence of Schumpeter’s concept of “creative destruction” (the idea that capitalism is powered by constant innovations, which continually displace previous means and modes of production) and Girard’s “mimetic theory” (the idea that as humans come to desire something that others have, they come into conflict with others in pursuit of it) on Silicon Valley’s standard-issue worldview. In fact, Zuckerberg and his peers thought infrequently about the intellectual underpinnings of their efforts until they reached the point of cultural and economic significance when they needed to “contextualize what they’re doing.” That’s when all of the highfalutin’ economic revolution talk heated up and the likes of Google and Facebook embraced their newfound social missions. Once the venture capitalists of Silicon Valley formed the core of the economic establishment, they started acting the part.

Daub sees the intellectual architecture the tech sector has developed over the past two decades as a cloak for their pursuit of power and treasure.

And looking the part too. Daub notes that the corridors of Apple and Facebook look and sound a lot more corporate in 2020, and a lot more like a J.Crew catalog, than they did a decade ago. Back in the day, back before Congress called on Zuckerberg or @jack to discuss election tampering or cancel culture, the dudes (and it was almost exclusively dudes) who worked for Big Tech tended to resemble “Comic Book Guy,” the imperious, slovenly, and Rubenseque character from The Simpsons. Tech certainly presents better than it did a decade ago, but the sense of self-satisfaction remains. The garden variety cant of a know-it-all has been replaced of late wtih TED Talk clichés and bromides indicative of social concern.

Despite Silicon Valley’s apparent aspirations to universalism, the animating ideas of the tech sector arise from some rather specific places. Daub interrogates with great vigor the influence of a particular brand of West Coast hucksterism on the tech sector — the New Age self-help movement exemplified by the Esalen Institute. Esalen’s big ideas — the expansion of human potential, the broadening of human capacity for perception, and the ability of people to design a life of their choosing — sound like the sappiest of Google and Apple advertisements you’ve seen this week for a reason. The connections between West Coast self-help gurus and the pioneers of computer science dates back into the 1960s. The likes of Steve Jobs and Steve Wozniak had ties to Esalen that reached back into the 1970s. Despite their reputation for embracing all things natural, New Agers have a long track record of embracing futurism in all its forms. At the same time, the emerging digerati, in its quest for meaning, found a conceptual framework for their technological determinism in the rosy esotericism of Esalen.

The mainstreaming of cryptic self-help mumbo jumbo has proven to be one of the most profound intellectual developments brought about by Big Tech. Daub rightly sees the tech sector as both one of the primary causes of and purveyors of a post-industrial “aestheticization of labor practices.” The author finds an old-fashioned paternalism in many of tech’s biggest companies, a belief that their workers are creators within a family of creators rather than denizens of the salariat engaged in the workaday slog of coding. Likewise, Daub sees in much of the gig economy a glamorization of the service sector. Somehow delivering pizzas for DoorDash is superior to doing so for Domino’s because it presents drivers with the sense that they are driving for themselves and on their own schedule, even if the compensation, workload, and time spent on the job are similar. Whether one is a denizen of Silicon Valley or a delivery driver in Des Moines, the tradeoff for this romanticizing of drudgery seems to be a sacrificing of the work–life balance that many Americans enjoyed throughout the 20th century.

The milieu most prominent among the giants of Silicon Valley is that of elite colleges. Daub calls out the bildungsroman of choice among tech giants — the story of the college dropout who failed time and again to bring his vision to life before finally scoring big on the right idea. Dropping out has become tech’s grand romantic gesture, the beginning of a Kerouac-like journey from the sophomore dorm room to the executive board room. Yet this fairy tale seems to have happened almost exclusively to kids who 1) attended elite colleges, 2) had developed significant access to venture capital through their associations at such schools, and 3) came from wealthy families that provided them with a safety net that enabled them to fail at a few different endeavors. Your local state college comp-sci dropout is not about to found the next earth-shaking startup. There are plenty of great reasons one could give for why fewer young people should build their plans for the future around a four-year college education. But the idea that you should drop out of college to start a tech company is not among them. Unless you are a Harvard man or have a healthy trust cushioning your every fall, the assumption that you are a budding Elon Musk seems like a surefire path to disappointment and financial hardship.

Taken together, the insights in Adrian Daub’s new book form a robust critique of Big Tech’s underlying ideologies. What Tech Calls Thinking is a slim, well-written volume that both pillories the groupthink of Silicon Valley and explains what troughs the contemporary captains of industry have been drawing from as well as any book in print.