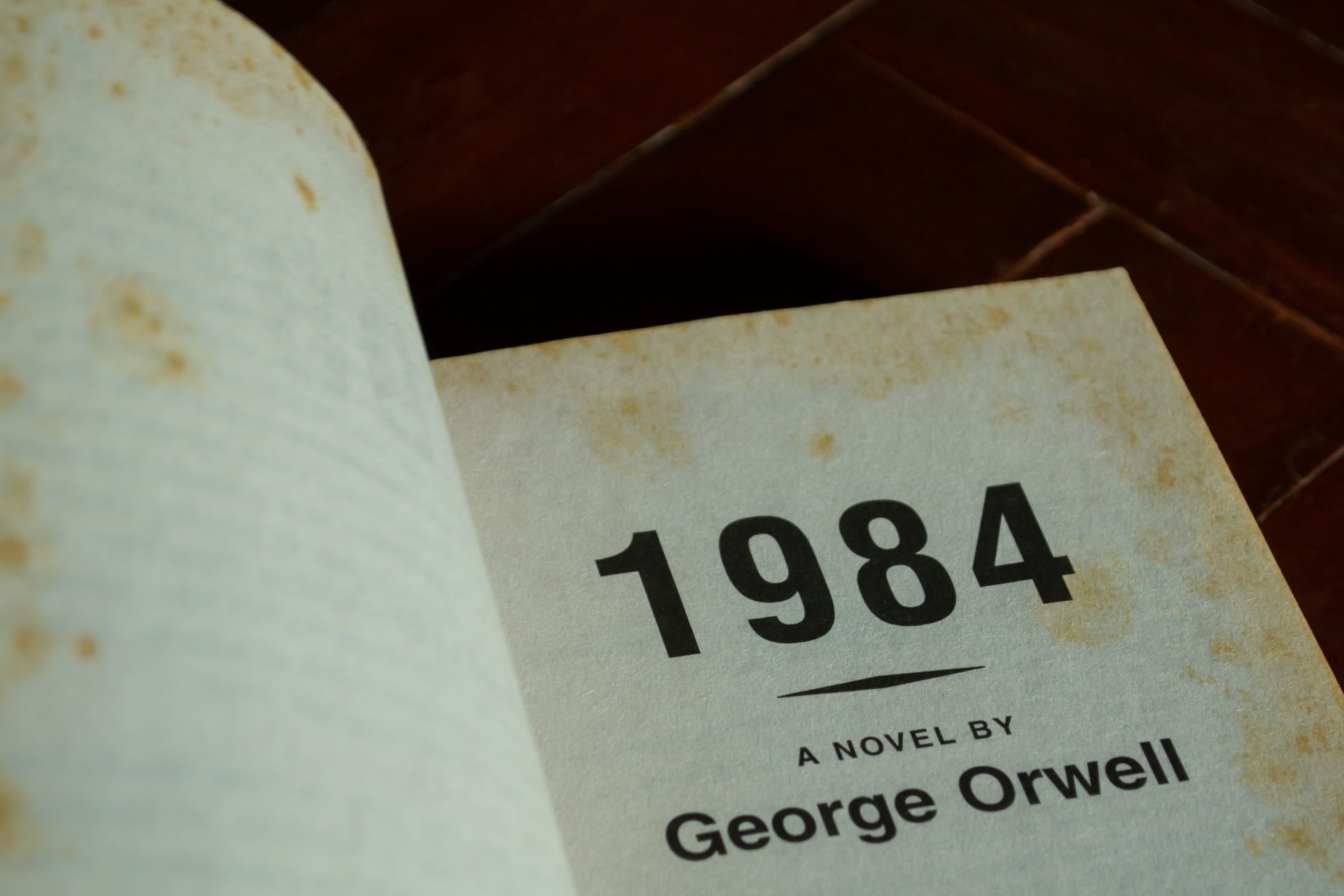 Following the riots at the Capitol on January 6, several major social media platforms (now including YouTube) have banned or suspended Trump’s accounts. Though the word “unprecedented” has been thrown around a lot lately, with varying degrees of accuracy, the removal of a sitting president by unelected tech magnates from what essentially constitutes the public square truly meets the definition. Interestingly, this was accompanied by Simon & Schuster dropping Sen. Josh Hawley’s upcoming book, The Tyranny of Big Tech, slated to be released in June. Both Sen. Hawley and Donald Trump Jr. (and countless others) have called the events “Orwellian,” prompting a cultural debate on the meaning of the word.

Let’s be honest with ourselves. This was inevitable. Orwell has been too important a cultural landmark for too long for him to be ignored. As long as 1984 is still taught to high schoolers (and it must always be taught there), any authoritarian ideology that seeks to impose itself will have to contend with him at some point or another. Seeing that 1984 has recently leapt to the top of Amazon’s list of best sellers, it would seem that such concerns are weighing heavily in the collective consciousness.

You can take the temperature of a society by seeing what discussions it finds necessary. So it is revealing that there are currently groups attempting to thread the needle of maintaining respect for Orwell while simultaneously defending censorship. In a recent article from USA Today titled “You may be using the term ‘Orwellian’ wrong. Here’s what George Orwell was actually writing about,” author Barbara VanDenburgh (with the help of some surely very impressive sources) attempts to gaslight readers into an entirely backwards interpretation of everything Orwell stood for.

To rebut Trump Jr.’s claim that Twitter’s banning of a sitting president was “Orwellian,” VanDenburgh refers to one Pallavi Yetur, whom she describes as “a practicing psychotherapist with a master’s degree in creative writing whose critical thesis was on Orwell and how his life experiences formed the way he thought about government.” Yetur responds to Trump Jr. by claiming that the Twitter’s actions were actually “counter-Orwellian.”

“In fact,” she states, “Donald Trump Jr.’s tweet is Orwellian because he is using language as a way to control people’s opinions about something that’s happening in his favor, and that’s propaganda.”

She goes on to say, “A Nazi propagandist like Leni Riefenstahl, that would be very Orwellian, because that’s somebody who’s using words to invoke feelings, to invoke allegiances, to discredit enemies.”

That something so dizzyingly idiotic was ever uttered by an educated adult (let alone printed in a publication with a readership of millions) is an embarrassment. Not only does Yetur reveal that she is unable to distinguish what is Orwellian from what is simply propagandistic, but she is also apparently unable to distinguish propaganda from what is simply rhetoric, the fundamental use of language to persuade people. Under the absurd standard given, practically all political speech could be labeled “Orwellian.” In no way does this description capture what was so unique and terrifying in Orwell’s description of perfected totalitarianism.

Let’s take a moment to set things straight. Though various dictionaries produce different answers, they tend to agree that “Orwellian” means “related to or suggesting Orwell’s 1984.” Unsurprisingly, such a broad definition leaves lots of room for argument, but the heart of Orwell’s message and his warning, no matter how many “credentialed” imbeciles claim otherwise, is about the power to suppress thought. Whether that power is wielded by the State or by a private company (a possibility Orwell likely could not have conceived of in his lifetime) is immaterial. What matters is the danger posed by thought-corrupting authoritarianism. One method might be to abuse language by redefining familiar words, like claiming that words can be “violence” but burning down a business isn’t, or that racial hatred isn’t racism. Or it could be a brazen denial of reality like standing in front of a burning building and referring to a riot as “mostly peaceful” or asserting that 2+2=5, or — do I really need to go on?

It’s about the power to so damage people’s ability to think that they are unable to recognize or articulate reality. It isn’t merely about saying false things, it is about making it impossible to say true things. This is inseparable from the subject of censorship. That freedom to speak freely is essential to the ability to think freely has of course been observed by many. The end goal of “Newspeak” in 1984 was to create a language in which it would be literally impossible to have “subversive” thoughts.

Though Simon & Schuster’s decision to drop Sen. Hawley’s book does not technically violate the First Amendment, it surely does violate its spirit. In general, I think it’s a bad sign when a book taking aim at the power of Big Tech gets shut down by a censorious mob whipped up on the very social media platforms that are the subject of that book. Call me crazy, but it just gives me that sinking feeling of watching something dangerous take shape. The preservation of liberty has always depended on moral courage, and I get nervous when I see that courage failing.

And YouTube has, in addition to suspending Trump’s account, for some time now been moderating what ideas users are allowed to express on the platform. Since early December, videos suggesting that Trump’s electoral loss was the result of voter fraud (even as related cases were being litigated) have also been subject to removal. In April, the company announced that they would be pulling down videos that spread “misinformation” (read: “opinions that do not conform to the accepted narrative”) about the coronavirus. The best example was the removal of a video of two doctors who were arguing for a relaxation of lockdown measures, a view that has since been vindicated. And that is precisely the point.

Does it need reminding that 1984 is a book in which the henchmen of the totalitarian government are literally called the “Thought Police” or that Winston Smith, the protagonist, works in the “Ministry of Truth,” where his job is to falsify historical records to create a government-approved account of the past? Have any of these people actually read this book? In fact, USA Today‘s attempted use of credentialed “authorities” to speciously redefine the meaning of “Orwellian” is itself a perfectly Orwellian example.

Lest I be accused of naked partisanship, let me set the record straight: there is every likelihood that Orwell would have despised Trump. His buffoonish demeanor, his tendency to play fast and loose with the facts, and his boastfulness all would have probably aroused Orwell’s disgust. But having read the better of Orwell’s catalogue (of which his essays are perhaps the most under-appreciated part), I cannot for one instant bring myself to believe that he would have allowed that distaste to mislead him into supporting the censorious, thought-destroying elements of our current predicament.

There is no chance that Orwell, who was well aware of the press’s capacity for misrepresenting facts and misleading their readers, would have supported unelected billionaires deciding what ideas and whose speech the public should have access to. The mere suggestion is so absurd that the mental gymnastics that have since been employed in the attempt to make it seem plausible would be truly impressive if they were at all competent.

Plenty have cheered the recent actions of Twitter and Facebook, even some who should know better. In general, many have been only too happy to support the censorious overreaches of Big Tech when it provides them some transient political advantage. But Orwell, far-sighted as he was, would surely have been able to recognize such a vulgar display of power for what it is: the harbinger of something far worse than the most terrifying fever dream of the damage a Trump tweet might do.