For patients with moderate COVID-19 symptoms, monoclonal antibody (mAb) treatments have proven remarkably successful in decreasing hospitalization and death rates. Moreover, because states and health care providers could order mAb shipments directly from suppliers, they have been utilized to great effect in places that have experienced recent case spikes. In Florida, for example, the CDC indicates that new COVID deaths have plummeted from an August 26 peak of 356 to only 8 on September 17 (see graph below). Such success in a red state was obviously galling for the Biden administration, however, so the Department of Health and Human Services (HHS) was directed to seize the mAb supply ostensibly to achieve “equitable” distribution. 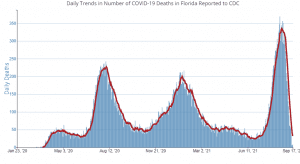 For the Biden administration, “equitable” means arbitrarily restricting red state access to mAb treatments and forbidding direct purchase by providers — all based on the false claim that places like Florida are monopolizing these therapies due to their dilatory vaccine rollouts. In reality, red state distribution of vaccines outpaced their blue counterparts when the jabs first became available. And, mendacious media reports notwithstanding, 70 percent of Florida’s residents have received at least one shot, including 88 percent of its largest-in-the-nation senior population. Even with the latest Delta variant spike, Florida has a lower Confirmed Case Fatality Rate (1.44%) than two-thirds of its counterparts.

Florida’s GOP governor, Ron DeSantis, was clearly outraged that the Biden administration is willing to harm and even kill COVID patients for the sake of politics: “I will fight like hell to overcome Biden’s cruel decision to drastically reduce lifesaving monoclonal antibody treatments for Floridians.… It’s wrong to penalize Florida for his partisan bitterness.” The Governor went on to point out the decision wasn’t merely bad for the health of Florida residents, it was yet another of our president’s trademark flip-flops. Biden himself quite recently pledged that he would increase the pace of mAb shipments by 50 percent. Gov. DeSantis disposed of that disingenuous promise as follows:

Part of the DeSantis plan to overcome these Biden administration obstacles is to work out an agreement with GlaxoSmithKline (GSK) to purchase its monoclonal antibody treatment, Sotrovimab. The Food and Drug Administration (FDA) granted an Emergency Use Authorization for Sotrovimab in May. Unlike Regeneron, the mAb that Florida had relied upon until HHS seized it all last week, GSK is thus far free to make a deal with Gov. DeSantis for the distribution of Sotrovimab. However, the Biden administration has declared itself the final arbiter of “equitable distribution,” so it is entirely possible that HHS will swoop in and seize the Sotrovimab in order to dictate which states will receive it.

Florida is by no means the only target of the Biden administration’s mAb rationing scheme.  It will also harm the residents of Alabama, Georgia, Louisiana, Mississippi, Tennessee, and Texas. These states plus Florida, according to White House press secretary Jen Psaki, have recently been ordering 70 percent of the mAb doses. Never mind that they have been experiencing Delta variant spikes, the Biden administration insists on reducing their mAb shipments in the name of “equity.” It won’t surprise anyone familiar with Biden’s record on race, that his administration’s notion of equity will do the most harm in states with the highest number of Black residents. Breitbart’s Joel B. Pollak writes:

Those inclined to write this off as tinfoil hat stuff should remember that the pandemic has disproportionately affected Black Americans. It is frequently claimed by Democrats and their media partners that southern states have been hit hard by the Delta variant because they are filled with MAGA types who refuse to be vaccinated. The reality is that the most vaccine-hesitant residents of these states are Black. But surely even Joe Biden is not so callous that he would condemn African-Americans to illness and even death for political purposes, right? Don’t forget, this is the guy who told Charlamagne tha God, “If you have a problem figuring out whether you’re for me or Trump, then you ain’t Black.”

Even if one disregards the racism charge as a conspiracy theory, it’s difficult to find a nonpartisan reason for the Biden administration’s decision to deprive tens of thousands of patients in seven states of monoclonal antibody treatments that have proven very successful in decreasing hospitalization and death rates pursuant to COVID-19. It is a cynical and politically driven policy that will harm Americans of all races. Are Biden and his lackeys this cruel? What would the Americans they left for dead in Afghanistan say?