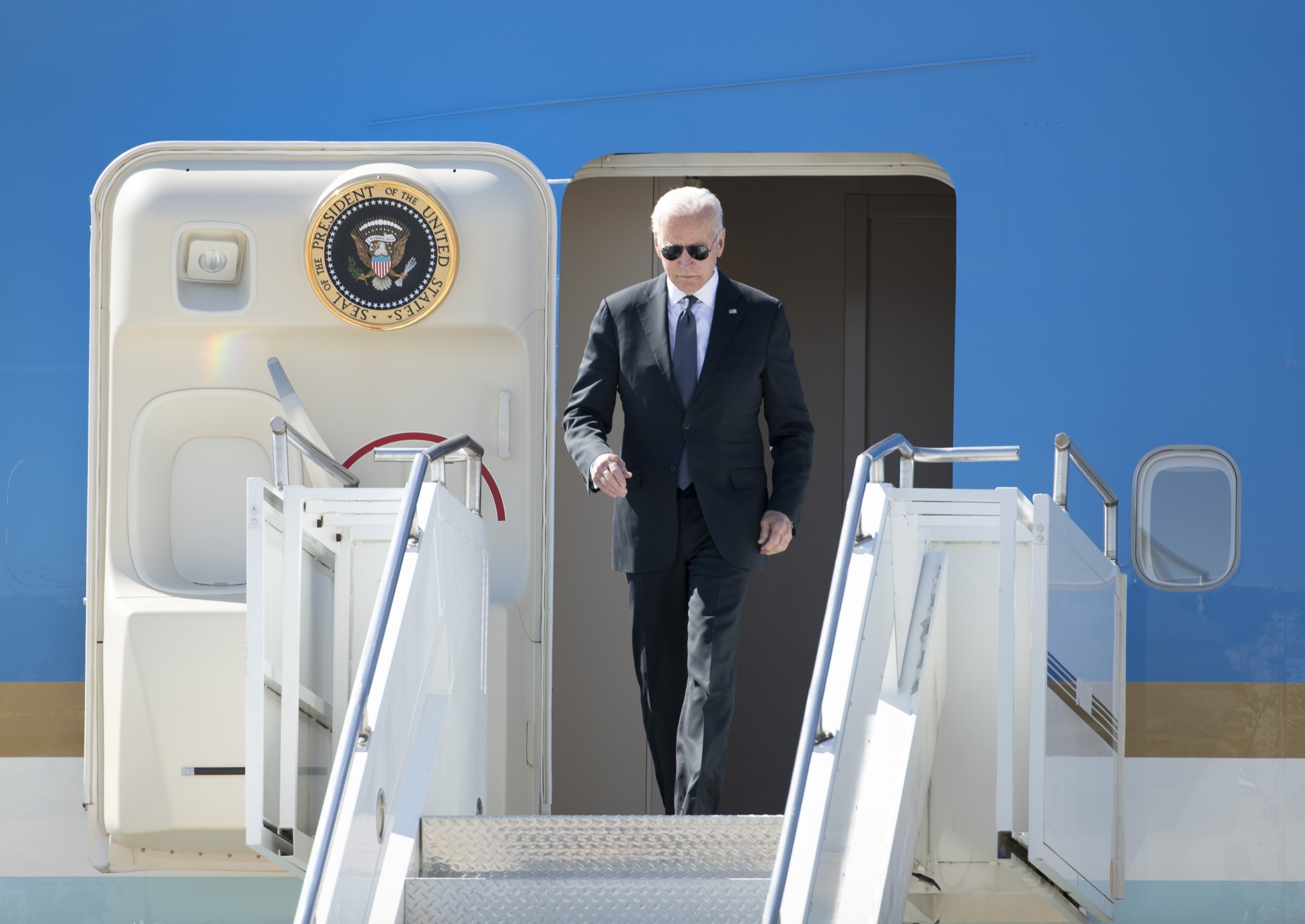 In recent days, conservative media outfits have gleefully presented one of the least surprising headlines of modern times. Namely, that Joe Biden’s presidential approval rating has sunk below the waves.

In the latest Rasmussen poll, Biden is now at a 47 percent approval rating, with 52 percent disapproval. Worse, his Strong Approval number is only 27 percent, compared to a Strong Disapproval of 42. That gives him a minus-15 in Rasmussen’s approval index numbers.

Thursday’s numbers were one point better than Wednesday’s, which is likely statistical noise. The trend, however, is not Biden’s friend.

Backing out a bit more data from those numbers, Biden is ahead 20-10 with voters who don’t care one way or another about him.

That means he still has a very long way to fall.

And there is very little out there for him to grasp so that he might pull himself back up, assuming Biden even has such ability in the best of circumstances.

How’s it going to get better? Start at the border.

Let’s understand something: deluging America, particularly America’s southwest, with two million illegals is not how you hold on to the Hispanic vote. In fact, almost nothing in the Democrats’ current agenda augurs well for future performance with that contingent.

But the border is especially a negative.

Let’s talk about the mythical Mr. Fernandez, who’s your Latino everyman in modern America. Let’s say Mr. Fernandez is a carpenter, or a plumber, a second-generation Mexican-American who lives in, say, the barrio in South San Antonio.

His neighborhood is a borderline slum, but he owns his house in it. There’s a rented house next door which is usually overpopulated with illegals. He wakes up to trash in his yard often. He worries that MS-13, or something similar, will take over the streets, with the crime attendant in that. The public school his kids go to and the emergency room at the hospital nearby are usually overpopulated, to varying degrees, with illegals or their children.

Mr. Fernandez doesn’t have anything against the illegals, but that doesn’t mean he’s willing to sacrifice his own quality of life for them. And he bristles at the idea that public policy ought to be made in order to coddle them because that’s the key to getting his vote.

For two decades, that was the Republican Party’s attitude, and he saw that as such a swing and a miss that he gave up on the GOP. He began voting Democrat, at least in federal elections. In state races, he’d pick a Republican here and there because Texas Democrats are often a lot loonier than he cares to support.

Along came Donald Trump, and Mr. Fernandez wasn’t much of a fan. He believed media reports that Trump was a racist who hated Hispanics because he said Mexico wasn’t sending America its best, and he swallowed the line that Trump was talking about Latino men as rapists and worse. He thought little of Hillary Clinton but voted for her.

Then he saw Trump get control of the border. MS-13 largely vanished from the streets. They started teaching a lot more English at his kids’ school. The ER all of a sudden didn’t have a five-hour wait because of so many illegals without health insurance. And the rent house next door only had four people living in it instead of the eight it had previously held. Not to mention that from 2017 until COVID hit and put everything into a tailspin, Mr. Fernandez was making more money than ever with all the construction going on in town.

But now Biden is president, and that rent house has a dozen people living in it. Home construction has ground to a halt thanks to the skyrocketing cost of building materials, which means Mr. Fernandez now has money problems he didn’t have before. He had planned on moving out of the barrio into one of the middle-class suburbs adjoining San Antonio, but that’s on hold indefinitely. The gangs flex their muscles in the barrio, loaded up with recruits from across the border and parts south. And when his son broke his arm sliding into second last week, the wait at the ER was half the night — and it was miserable, thanks to COVID protocols arising from all the illegals who arrived carrying the virus.

Furthermore, Mr. Fernandez might claim Hispanic status, because there is an advantage in that and because it’s a cultural identity he’s proud of. Still, he doesn’t consider “Hispanic” to be a race. He believes, as do lots of folks like him, that there are three types of Hispanics — there are black Hispanics, Native American and mestizo Hispanics, and those who come from Spanish ancestry. He’s the third kind, which means Mr. Fernandez considers himself white, and he considers his kids white as well.

And when the Democrats now insist on teaching his kids that they’re privileged and worse than that, they’re born racists, Mr. Fernandez is utterly disgusted. He doesn’t understand this idea that everything has to be put aside for the benefit of black people when he knows his father arrived from third-world Oaxaca with absolutely nothing and worked his fingers to the bone just to climb into the lower middle class while the “oppressed” Americans spent their time complaining.

And as a staunch Catholic, he is really not a fan of this transgender business the Democrats keep pushing.

He’s telling people he’ll never vote Democrat again. Especially when he sees Biden’s flaccid response to the demonstrations in Cuba. Mr. Fernandez speaks Spanish exceptionally well, thank you, and he finds Patria y Vida to be muy inspirational. Mexico isn’t communist like Cuba, but he has a family history with bad government.

There are an awful lot of Mr. Fernandezes out there, and they’re the reason why the Democrats are beginning to panic about their numbers among Hispanics. Trump did noticeably better in 2020 than he did in 2016, and the GOP is starting to make a lot of post-election headway because of the exact scenario described above.

And if the Republicans top 40 percent with the Hispanic vote, nothing about current Democrat politics works. That’s something to consider if Republicans are going to start winning mayoral elections in 85 percent Latino McAllen.

Inflation isn’t very helpful to Biden’s cause. Remember a month ago when the administration’s line, and that of the DNC, was that inflation was nothing to worry about, and it was the GOP making it an issue when it wasn’t one? Well, it isn’t getting any better, and now the Fed is admitting the problem will continue for quite a bit longer.

As a result, Biden’s second-quarter GDP growth number was 6.5 percent — almost two whole points off the projected 8.4. His economy is officially underperforming. There are lots of policy reasons why, none of which are helpful to him politically.

And the administration is busy trying to shut the economy down again, pushing lockdowns and mask mandates due to the Delta variant, which appears to be less deadly than any other COVID strain. It might be more infectious, but if it’s a bad cold, people who have already taken a vaccine aren’t going to put up with being required to mask up. That was the whole point of taking the jab in the first place.

That the CDC appears to have made the recommendation for masking vaccinated people based on flawed and irrelevant science is a bad look.

It isn’t like President My-Butt-Got-Wiped is going to turn things around with a brilliant speech. And the country isn’t really going to take Oliver Darcy and Brian Stetler’s word for the quality of Biden’s orations. Not when they see the quivering word jello that he’s become, and not when they watch him flop around like a fish on the deck about things like vaccinated people and masks.

The January 6 committee is doomed to backfire, if for no other reason than it’s bound to call into question why there are so many people in jail, without bail, on charges of non-violent crimes. Say the words “political prisoners” and leftists will lose their minds in apoplexy, but there’s a reason for that. They know they have exposure to this score. After all, the standard they set for the term is pretty low. When you go decades trying to lionize a cop-killer like Mumia Abu-Jamal, you don’t get to act like the Munn family are real threats to American democracy.

People are going to notice these things over time.

They’re noticing them. That’s why Biden is at 47 percent approval, and it’s why the inevitable decline has only begun.