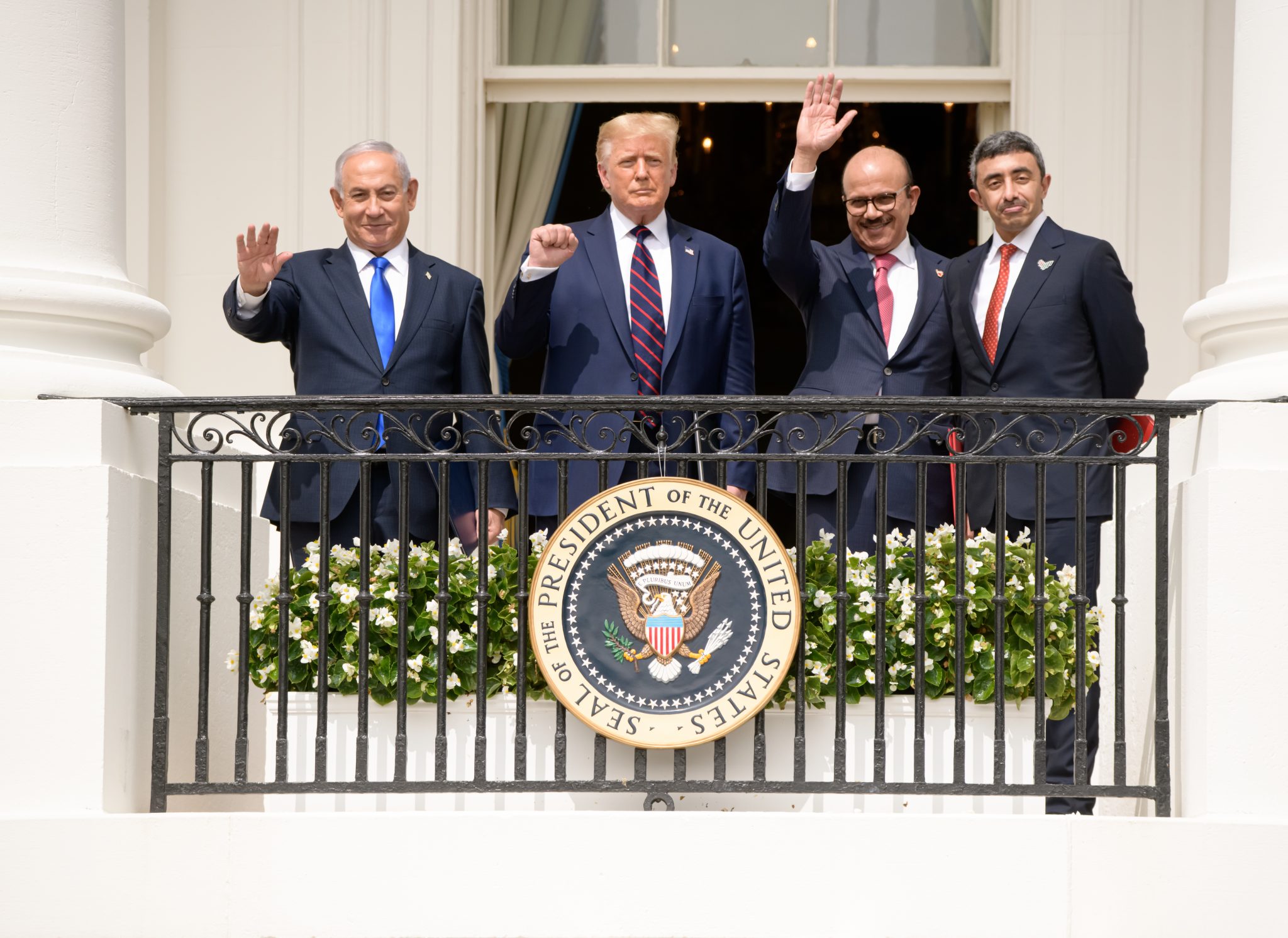 It has been seven decades since the founding of Israel, more than a century since the downfall of the Ottoman Empire, and about fourteen hundred years since the death of Islam’s Prophet Mohammed led to the split between Sunni and Shiite Muslims.

Thus, for more than a millennium, with brief interludes of peace, the Middle East has been torn apart by religious rivalries and competition among colonial empires. Those forces still operate today, but thanks to President Trump throwing out the “wisdom” of diplomats and “experts,” coupled with the threat Iran poses to the Sunni states, a historic realignment of the Middle East had begun. The question now is how quickly the election of Joe Biden will reverse Trump’s accomplishments.

The Trump realignment, if it were to continue, would be more significant than the “Arab spring” or anything else that has happened in the region since Israel was created by United Nations mandate. Since then, Israel has had one ally — the United States — and an enormous number of enemies, ranging from the Arab nations and Iran to Russia, China, and many European nations.

Arab hostility to any Jewish presence in what had been the British Mandate of Palestine was not new. Jews had lived in Palestine since biblical times, before Islam existed. When Jews began arriving in great numbers after World War I, Arab riots against them in 1920 and 1929 took many lives.

It is impossible to avoid the conclusion that the Arab opposition to any Jewish presence in what is now Israel was and is a religious one.

When Israeli independence was declared in 1948, five Arab nations immediately declared war on Israel, a conflict Israel barely won. The 1948 war didn’t convince the Arab nations that Israel was there to stay, but their defeats in the 1967 and 1973 wars made that clear. Israel’s wars in Lebanon, which continued from 1982 to 2006, were against Iran’s puppet in Lebanon, the terrorist network Hizballah, and were stalemates.

Having failed to eradicate Israel, the Arab nations boycotted it, hoping to strangle it economically. That failed too, as did the 1973 Arab oil embargo on the United States.

Trump, who was constantly accused of bashing our allies and befriending our enemies, enjoyed creating disruptions. He disrupted the failed Middle East “peace process” by moving the U.S. embassy from Tel Aviv to Jerusalem. The “experts” assured us that move — along with Trump’s attempted deal with the Palestinians — would enrage the Arabs and the Palestinians to a degree that peace would be impossible unless Trump’s actions were undone. The “experts” were wrong. Trump proved the Palestinians irrelevant to Middle Eastern peace.

Trump was the most pro-Israel president we have ever had. But all he has accomplished will be quickly tossed aside by Biden.

When Trump ordered the drone strike that killed Qassem Soleimani, Iran’s chief terrorist, many of those “experts” predicted open war with Iran. Again, the “experts” were wrong.

Despite the advice of the “experts,” Trump and Secretary of State Mike Pompeo have brokered peace deals between Israel and the United Arab Emirates and Bahrain, at this writing. [Editor’s note: The Trump administration later made deals with Kosovo, Sudan, and Morocco.]

Trump’s engineering of the UAE and Bahrain deals with Israel was timed perfectly. Iran’s aggression toward the Arab nations has made those two nations admit what the rest of the Arab world is finally recognizing: that whatever theoretical danger Israel poses to Islamic dominance of the Middle East pales in comparison with the threat of Shiite Iran. And, at least with Trump in the White House, Israel’s security was too important for us to abandon.

The Arab nations have seen Iran’s proxies in Yemen, the Houthis, firing missiles at Saudi Arabia’s oil facilities. They aren’t fools: they understand the danger to them from Iran’s ballistic missiles, its terrorist networks, and its secret development of nuclear weapons. They are terrified of Iran, and rightly so.

The UAE and Bahrain could have proved to be the vanguard of a new Middle East in which Sunni states align themselves with both Israel and the United States to isolate Shiite Iran. For that reason, the Trump-engineered breakthrough in the Middle East should not be underestimated.

The rivalry between Arabs and Iranians is ethnic as well as religious. The majority of the world’s Muslims, about 1.6 billion people, are Arab, Pakistani, and African Sunnis. The majority of the Shiite population is in Iran, which is ethnically Persian and believes itself superior to Arabs. The Shiites are a small minority among the world’s Muslims. Both factions regard each other as religious apostates.

As a result of a big push by Trump and Pompeo, the UAE announced that it was ready to begin normal relations with Israel, including trade, tourism, and, soon, full diplomatic relations with the Jewish state. The first regular airline flight from the UAE to Israel followed quickly.

Bahrain made the same peace accord and said it was ready to trade with Israel. Other Sunni nations such as Kuwait, Oman, and Sudan could follow.

The UAE–Bahrain breakthrough was condemned, of course, by the Palestinian “government” of Mahmoud Abbas. When the twenty-two nations that are members of the Arab League refused to condemn the normalization of relations between Israel and the UAE, the Abbas “government” declared that the Palestinians had been abandoned by their Arab brethren.

Abbas’s claim of abandonment is true but inconsequential. The Palestinians, since Israel’s founding, have made the destruction of the Jewish state their sole reason for being. The Arab nations have used the Palestinians as a political tool against Israel, which has availed them nothing. The UAE and Bahrain realignment proves, redundantly, that the Palestinians are irrelevant to peace in the Middle East.

It’s easy to see why both the UAE and Bahrain took this historic step. Both are tiny states on the Persian Gulf that have long relied on America to protect them from Iran. Bahrain is the headquarters of the U.S. Fifth Fleet, and there is a large U.S. Air Force presence in the UAE. There are about fifty thousand Americans living in the UAE.

In short, the example of those nations could lead other Arab nations in the region to normalize their relations with Israel. The big question is whether Saudi Arabia — in which many American troops and aviators are stationed — will join in the realignment.

It will be very difficult, but not impossible, for the Saudis to join. Their religion, Wahhabism, is a radical sect of Islam different from, but almost as radical as, Iran’s Shiism. Many members of the Saudi royal family have donated money to terrorist organizations.

But the Saudis are in as great a danger from Iran as any nation. They have been attacked regularly by Yemeni Shiites, the Houthis. Iran’s constant threats to close the Persian Gulf to shipping would cripple the Saudi economy. The Saudis’ great fear is that their eastern province, which has a majority Shiite population, would rebel at Iran’s urging. That hasn’t happened, at least yet, but the Saudi royal family is reportedly split on whether to join Trump’s coalition of Arab states. Biden’s election will cause the Saudis to reject a peace deal with Israel because, while he probably won’t be as anti-Israel as Obama was, Biden will be at best an unreliable ally of Israel.

The Saudi rulers, including Crown Prince Mohammed bin Salman, have to be realistic about the Iranian threat. Now that Biden has been elected president, that pressure will disappear, buried by Biden’s plan to rejoin the Obama nuclear deal with Iran.

Trump was the most pro-Israel president we have ever had. But all he has accomplished will be quickly tossed aside by Biden. Biden’s avowed intention to rejoin the 2015 Obama nuclear deal with Iran will weaken Israel and make it far less likely that other Arab nations will seek peace with the Jewish state.

It has been obvious from the outset that the Iran nuclear deal was highly dangerous because it provided no means of verifying that Iran was abiding by its obligations. Its inspection regime allows Iran to “self-inspect” nuclear sites it bans from inspection by the International Atomic Energy Agency (IAEA), an instrumentality of the UN. Under a previous director, Egyptian Mohammed el-Baradei, the IAEA was, for a decade, a purblind watchdog and an apologist for Iran. Now, even the IAEA has reported that Iran is violating the Obama deal by having twelve times the amount of enriched uranium it is permitted under the agreement.

By rejoining the 2015 Obama deal, Biden will automatically end Trump’s “maximum pressure” campaign of economic sanctions against Iran. He will get nothing from Iran in return. The UN arms embargo against Iran ended in October. Nations such as Russia and China will eagerly sell Iran new aircraft, ships, missiles, and radar systems. Iran will become even more dangerous than it is now.

Without unflinching U.S. support — which Biden will not give — Israel will be vastly weakened. It is still a regional power that has proved itself in three wars against the Arab nations. But Iran is an entirely different kind of enemy, much more dangerous than the Arab states. Once it obtains nuclear weapons — by developing them itself or by purchasing them from a nation such as Pakistan — it will be capable of destroying Israel in an afternoon.

Biden’s biggest foreign policy weakness comes from the fact that he is a multilateralist. He only favors U.S. action where our allies approve and join in the effort. His rejoining the Obama nuclear weapons deal with Iran will please nations such as the United Kingdom, France, and Germany, which have been supportive of it throughout Trump’s presidency. Biden’s multilateralism will transform U.S. foreign and defense policy by providing our allies a veto on our actions on Iran, China, and Russia, among other adversaries. As former Defense Secretary Donald Rumsfeld was fond of saying, weakness is provocative.

Trump’s engineering of the Middle East peace deals could have been the beginning of a new regional security alliance modeled after NATO. But Biden won’t put our strength behind such alliances, and so he dooms them to failure.

The stakes in the Middle East couldn’t be higher. Trump’s deals with the UAE and Bahrain provided a path to peace that hadn’t been attempted before. Biden’s intent to rejoin the Obama nuclear deal with Iran is a different path that will lead to war.