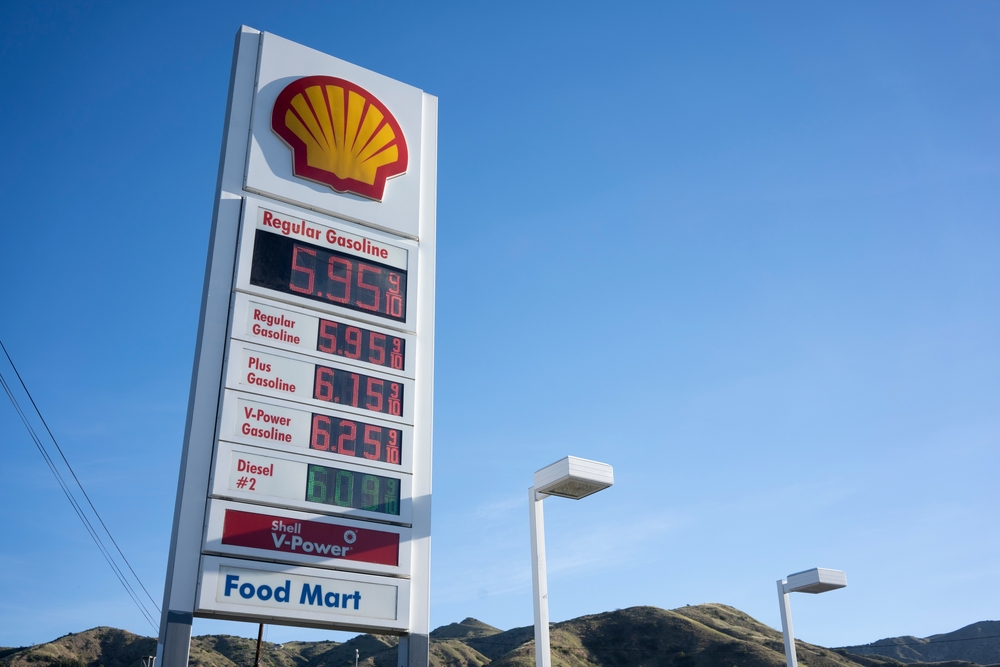 In recent years, the typical American household has spent around 5 percent of its pre-tax budget on gasoline. Apart from housing, food, and transportation — the actual cost of vehicles and their insurance — petrol is an essential item on the expense sheet of almost all Americans. And almost all Americans are thus feeling the squeeze from gravity-defying prices at the pump.

So how did we get here? All political administrations lie a little bit, and some lie a little bit more than that. But the government of President Joe Biden in little more than a year has managed to manufacture crisis after crisis in the domestic economy, without ever acknowledging that its own policies have been to blame.

After hemming and hawing for months about inflation — the administration repeatedly assured the nation it would be “transitory” — the Biden government now says the punishing surge in gas prices is due to greedy oil companies and, of course, the all-purpose bogeyman from Russia, Vladimir Putin.

White House spokesperson Jen Psaki now routinely refers to the “Putin price hike,” while the president himself has directly accused the oil giants of intentionally taking advantage of the American consumer while supplies are somewhat limited.

It is a compelling narrative, but for one inconvenient fact: none of it is true.

“All you need to do is look at the numbers,” says Bruce Clark, a senior analyst at Informa Global Markets, a company that provides data and analysis to the financial markets. “The numbers don’t lie.”

According to the Bureau of Labor Statistics (BLS), which is part of the U.S. Department of Labor, prices skyrocketed throughout Biden’s first year as president — well before Putin set off to wreak havoc in Ukraine.

From February 2021 to February 2022, food prices rose a whopping 7.9 percent — what the BLS called the largest twelve-month increase in the sector since 1981. But energy prices rose nearly 26 percent during the same period. And practically all of this is a direct result of the administration’s policy decisions.

Biden nixed the permit for the Keystone XL pipeline from Canada on his very first day in office — something he had pledged to do on the campaign trail, but something the markets had broadly already priced in. The move made a lot of headlines, but it was never clear how much oil the pipeline would have delivered. Woke progressives saw it as a chance to claim victory, and the halo over Biden’s head seemed to grow still more luminous.

But the serious work was happening behind the scenes, where Biden’s “climate czar” John Kerry — a man not seemingly allergic to his own private jets — was putting the full-court press on America’s biggest banks not to loan money to, or provide funding for, traditional oil and gas companies.

In conjunction with a United Nations initiative called the Net-Zero Banking Alliance, Kerry pushed America’s largest banks to stop money from going to entities involved in drilling, fracking, and other activities aimed at extracting energy from our own sovereign soil. In short, the United States was not supposed to use a pipeline from Canada or drill its own energy at home.

While Psaki keeps claiming that thousands of potential extraction sites in the United States lie fallow, the administration’s push to block energy companies from borrowing money is tantamount to shutting those sites down. Companies live and die by the debt they can raise in the credit markets — they need cash infusions to launch new projects, which is what bonds provide — and the administration is making that as difficult as possible.

“Banks don’t want to be called names,” says Clark at Informa. “The government has essentially demonized the oil and gas markets. And when the government is knocking at their door, they don’t really have any choice but to listen.”

Big banks make money by loaning money — the global size of the bond market dwarfs the size of the stock market — and restrictions on lending are a needless brake on the U.S. economy. Yet at a time when interest rates have been at historical lows, minimizing the ability of banks to profit from their loans, the Biden administration is doubling down on its efforts to block them from financing the United States from getting its oil and gas right at home.

That sounds woke enough to satisfy a certain braying section of the populace. But whatever one’s political stance, it’s simply a bad idea when banks are banned from making money.

And oil and gas companies need bank funding to undertake new drilling operations. According to general industry standards, it costs at least $500,000 — at pre-inflation numbers — to build a new drill site, plus up to $30 per barrel to extract the oil. If they can’t raise the money to start that via the bond markets, they simply cannot afford to drill.

“I’m not sure these fellows have thought this through,” says a senior Wall Street analyst who declined to be named because of his involvement with the sector. “You cannot argue that banks are evil while your entire economy depends on banking. They have to be free to act normally.”

All Blown Up Now

At the origin of this mess was Biden’s decision to hand out free money that the United States quite simply does not have. Driven by the squeaky wing of the party over which he nominally presides, Biden has rarely missed a chance to distribute cash on every street corner he can find. And the COVID-19 pandemic gave him a grand opportunity to do that.

Virtually every policy decision being taken at the state and federal level is wrong.

While it has become a cliche to say that freedom isn’t free, it’s worth remembering that money isn’t free either. According to a recent report from the Federal Reserve Bank of San Francisco, the biggest surge in U.S. inflation of late started last year with Biden’s so-called COVID “relief” package, which amounted to a staggering $1.9 trillion.

The bank’s report — entitled “Why Is US Inflation Higher Than In Other Countries?” — succinctly lays out why U.S. inflation has spiraled out of control compared to other Western nations dealing with the COVID crisis.

“The United States is experiencing higher rates of inflation than other advanced economies,” the report says. “The sizable fiscal support measures aimed at counteracting the economic collapse due to the Covid-19 pandemic could explain about 3 percentage points of the recent rise in inflation.”

Depending where you are on the income scale, this logically means that your “free money” from Biden actually only made your household poorer. It’s the gift that keeps on taking.

In the minds of many in the markets, the United States is now at an inflection point similar to that of the early 1980s, when Paul Volcker, then the chairman of the Federal Reserve, deliberately crushed the U.S. economy in order to tame runaway inflation.

He raised borrowing rates so high that it was all but impossible for companies to keep doing business. Virtually overnight he plunged the U.S. economy into a recession — the worst, it was said at the time, since World War II — and all but eliminated the rampant demand that was driving prices out of control. Angry builders put stamps on wooden two-by-fours that they mailed to Fed headquarters in protest. President Ronald Reagan’s approval ratings fell to Bidenesque lows.

It was by any standard an audacious gambit — but it worked. Inflation was tamed in time, the economy rebooted, and Reagan went on to cruise to reelection in a landslide.

Oddly enough, the 1980s crisis was in part spurred by the 1979 Islamic Revolution in Iran, when an out-of-touch Western-style playboy autocrat was deposed by bearded religious militants who had their own ideas of what an autocracy looks like. Many in the West at the time started fretting about oil supplies in the wake of the shah’s overthrow. And now we have come full circle with Putin.

The virtue-signaling that comes with Biden’s insistence on sanctioning Russia — which supplied only about 3 percent of our oil before its invasion of Ukraine in any case — almost inevitably means we will buy more of our oil from Iran. They still chant “Death to America” there at Friday prayers, but as oil demand spikes and prices keep rising, the Islamists get ever closer to the nuclear weapons they are so desperate to possess.

As for the price at the pump here at home, virtually every policy decision being taken at the state and federal level is wrong. Many states are rolling back gasoline taxes, which will only drive more demand — and push prices even higher. California Gov. Gavin Newsom’s starry-eyed plan to give state residents a $300 “gas card” to offset pump prices will have the exact opposite effect of what he intends to do.

Meanwhile the Biden administration keeps stumbling along, spending as much money as it can as fast as it can. And there really isn’t anybody in the markets who believes the current Fed chairman, Jerome Powell, has the backbone to stand up, as his predecessor Volcker did, and say, “Enough is enough.” (READ MORE: Inflation Is America’s Payment for the Fed’s Printing Addiction)

Indeed, the Fed introduced its policy of so-called quantitative easing — buying up debt to increase the supply of money in the markets — as a short-term solution to the 2008 subprime financial crisis. But quantitative easing is still going strong fourteen years later.

And while the Fed is officially tasked to keep inflation at around 2 percent, inflation is nevertheless around 8 percent overall. Powell’s recent marginal increase in rates — the central bank’s first hike in more than three years — is akin to throwing a pebble into the ocean.

“The financial markets have essentially called the Fed’s bluff,” says Clark. “They don’t believe the Fed will harm them.”

So it becomes hard to see how all this will be brought under control. But in the immortal words of the late Herb Stein, President Richard Nixon’s chief economist and a longtime friend of The American Spectator: “If something cannot go on forever, it will stop.”