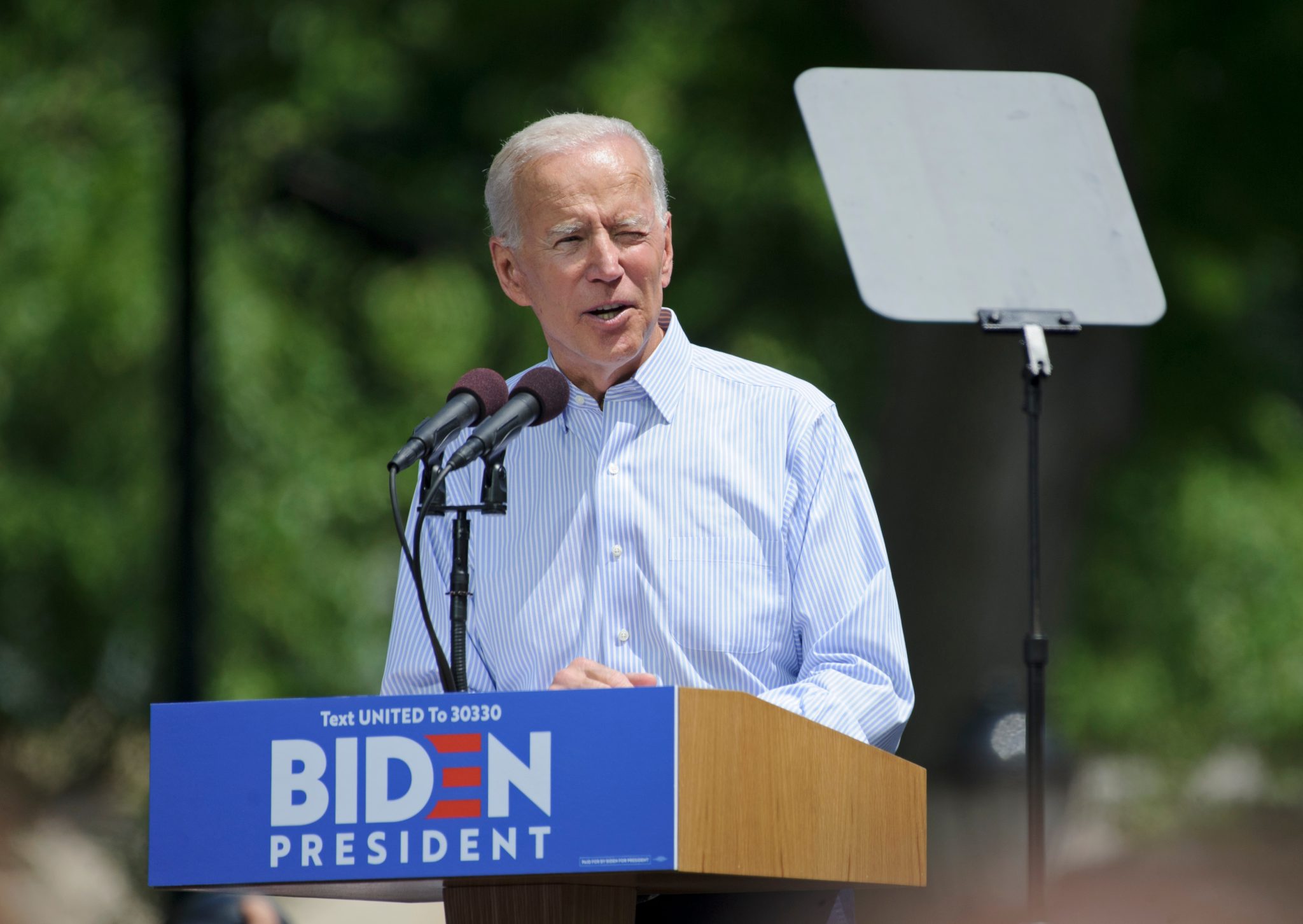 Biden is dangerously confused about China and Russia. I am not talking about Biden’s confusion about the countries’ names, which, given his tendency to forget and mix up simple facts, is entirely possible. Behind recent statements from Biden about China and Russia’s relationships with the U.S. lies a more serious concern. Biden misunderstands the basic facts about the two countries and lays out a foolish strategy, which could fundamentally harm the United States.

When asked which country is the biggest threat to America earlier this week, Biden replied that Russia is the biggest threat, and China is the biggest competitor. For him, the two are categorically different: one is a major threat and the other is merely a competitor. But who are our competitors? We compete with our democratic allies, such as Canada, the UK, Germany, and France. In Biden’s view, China belongs to this group — except it is larger. This is a very dangerous view for America. China under the Chinese Communist Party’s (CCP) dictatorship is not a country we just compete with. China is much more dangerous than Russia.

Communist China poses a much bigger threat than Russia.

Russia ended its communist dictatorship in the early 1990s and has embarked on its democratization process since then. While the process is difficult, Russia is no longer under communism. Now Russia has a multi-party system: about four major parties have members in the federal parliament with one dominant party (United Russia). Russian’s democratization has suffered serious backsliding during Putin’s reign. But opposition parties do exist. For example, the Russian Communist Party is the largest rival of United Russia.

The Russian court system is heavily influenced by Putin’s government. But at least in one known case — the 2012 Pussy Riot case — the court released a political protester against Putin’s will. Political protests are part of daily life in Russa. In Moscow’s Red Square, many street actors play Lenin, Stalin, and even Putin, and give all sorts of speeches. Press freedom is severely limited and independent media organizations are scarce and constantly harassed. Russia’s Press Freedom Score is 49 (1=free, and 100=not free) and ranked 149th out of 180 countries. Russia’s Political Freedom Score is 20 (1=completely not free; 100=completely free).

Economically, Russia is weak and small. Its GDP is $4 trillion (purchasing power parity, or PPP, adjusted, the U.S.’s is $19 trillion). In terms of economic freedom, Russia is ranked 94th out of 180 countries and is considered “moderately free.”

China, on the other hand, is under communist dictatorship. The Chinese Communist Party monopolizes all the political powers. The court system is completely controlled by the CCP. All the judges are appointed by the CCP. There are no opposition parties in China. There has not been a single case in which judges defied the CCP in their rulings. Anyone who criticizes the CCP will be harshly punished. An ID card and security check are required to enter Beijing’s Tiananmen Square. Numerous policemen and security guards, in uniform or plainclothes, patrol the square and swiftly arrest anyone who appears to be a Falun Gong practitioner or a Shangfang petitioner (groups that are mistreated by the government and seek justice). There is no press freedom: China’s Press Freedom Score is 78 and ranked 177th out of 180 countries. China’s Political Freedom Score is 10 (0=completely not free; 100=completely free).

Economically, China is huge and strong: Its GDP is $25 trillion (PPP adjusted), the largest in the world. In terms of economic freedom, China is ranked 103rd out of 180 countries and is in the group of “mostly unfree”.

In sum, Russia is an infant democracy ruled by a charismatic strongman, with some opposition, limited press freedom, a court system under heavy political influence, and a weak and small economy. China is a communist dictatorship with no opposition, no free press, a CCP-appointed court system, and a huge, powerful, and expanding economy, of which the CCP controls about 60 percent and uses the funds lavishly with little checks and balances to influence the world, especially the United States.

Below is a table that compares China and Russia: 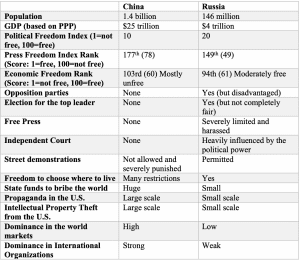 It is very clear that, in every aspect, compared to Russia, China’s ruling party is more dictatorial, Chinese people enjoy less freedom, and China has more resources to expand globally. If both countries spend the same share of its GDP on influencing America, China would outspend Russia by about 6 to 1. If both countries employ the same percentage of its people to collect intelligence from the U.S., China would send 10 times more spies to the U.S. than Russia would. If the U.S. allocates the same percentage of its people to counter China’s espionage, every U.S. agent would face four spies from China!

While I do not want to downplay Putin’s damage to Russia’s infant democracy or Russia’s threat to the U.S., it is beyond any doubt that communist China poses a much bigger threat than Russia.

As a senior adviser at the U.S. National Security Agency commented when comparing the threat posed by the two countries, “Russia is the hurricane…. China is climate change.”

If communist China is a worse offender of human rights and the rule of law than Russia, why is China viewed more positively than the latter in general? The short answer is that the CCP has been spending a huge amount of money to promote a false positive image of China and to bribe politicians, academics, and elites worldwide to sing along with the CCP.

So why does Biden downplay the threat by China? I think he either does not understand the political and economic systems of China, or he purposely misleads America for his private gain — or both.