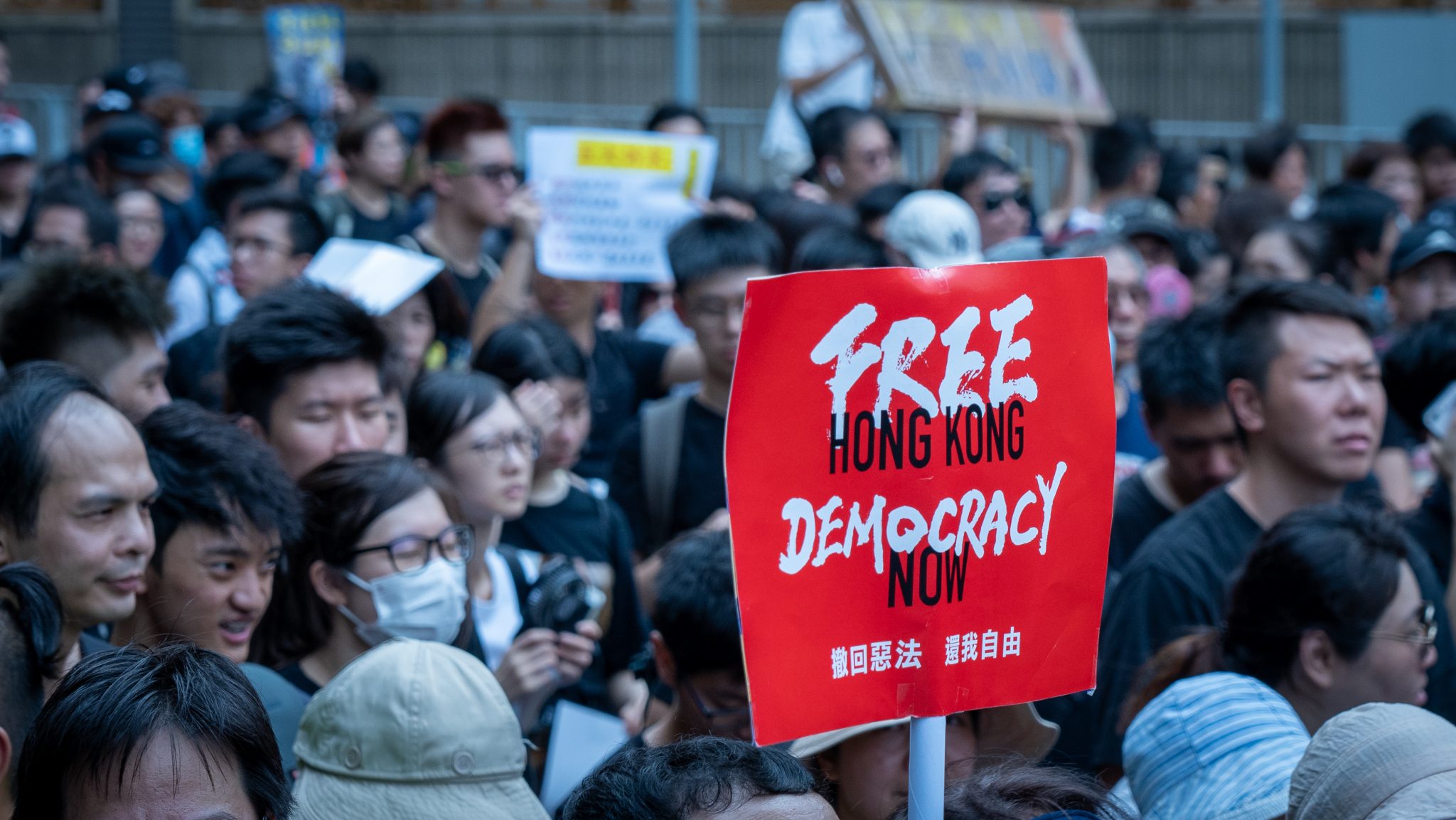 Hong Kong’s people used local elections to make their preferences clear. They want to live in a free society. No propaganda and threats from Beijing will change that. Xi Jinping and the Chinese Communist Party (CCP) have decisively lost the battle for Hong Kongers’ hearts and minds.

Founded in 1949, the People’s Republic of China cast itself as a revolutionary force around the world. Some in the West found Mao Zedong’s rhetoric appealing — while in high school I bought a copy of Mao’s little red book in London’s legendary Hyde Park. But the PRC’s disastrous experience of mass repression, poverty, and starvation dimmed enthusiasm for the experiment.

Everything changed with Xi Jinping’s ascension to the top of the party and government in 2013. Xi embarked upon a brutal domestic campaign to suppress dissent, strengthen the CCP, purge potential adversaries, and seize personal control. The result is an ongoing, systematic campaign to destroy religious liberty, close independent NGOs, greatly tighten censorship, round up Muslims, create a surveillance state, and impose true totalitarianism with a “social credit” system that monitors almost every aspect of individual behavior, both personal and official.

It is a striking return to Maoism and well beyond. The original Mao had little ability to enforce his wild rhetoric. Beijing had manpower in abundance but could not project power much beyond its land borders, as in North Korea.

That limitation has disappeared as Xi, essentially Mao reincarnated, has hardened China’s international approach. No more squishy reasonableness as part of the “peaceful rise” strategy. There are territorial claims to assert, naval clashes to stage, artificial islands to build, developing states to pressure, private companies to browbeat, foreign governments to cow, and recalcitrant populations to reprogram.

Although this policy is superficially threatening to the PRC’s neighbors, it has been a disastrous failure for Beijing. The regime has made itself stunningly unpopular. Japan is slowly dropping strictures on its military, the Philippines is encouraging Tokyo to do more, communist Vietnam is welcoming India’s fleet to East Asian waters, Australia is debating Chinese influence, South Koreans are seeing the PRC as a potential threat, European governments are worrying about Beijing’s manipulation of commerce, and Third World states are revisiting China’s “Belt and Road” investment projects.

Yet increasing resistance appears to have only caused the Chinese government to double down on repression. Angry at the failure of Uighurs to abandon their Muslim faith, Beijing locked a million or more into reeducation camps. Angry at Christians unwilling to replace Jesus with Jinping, the authorities destroyed churches and jailed believers.

Angry about the failure of Taiwanese to submit to PRC rule, Xi’s regime pushed ever harder to reduce Taipei’s international space. And angry at the rise of a more vociferous democracy/independence movement in Hong Kong, Beijing abandoned its long-stated commitment to maintain “two systems, one country” in the Special Administrative Region (SAR).

The Xi government blames rising opposition to Chinese rule on everyone except itself. Whether or not officials there really believe that America is to blame for Hong Kongers seeking freedom is not clear. It certainly is the story they are promoting to their own people, even after the massive vote against pro-PRC candidates on Sunday.

The regime previously suggested that the problem of inadequate enthusiasm for communist rule over the mainland was one of inadequate education. Therefore, Beijing reinstated “patriotic” education in college and reinstalled party cells in companies. Some Chinese university students expressed solidarity with their counterparts in Hong Kong, leading schools to inaugurate “education” programs about the Hong Kong protests. Now officials are suggesting that the territorial government teach Hong Kongers patriotism to turn protestors into docile, loyal Chinese automatons. For instance, researcher Andy Mok wrote in China Daily that “Hong Kong should find a a way to improve patriotic education of its residents,” as if lecturing them more loudly would cause them to support dictatorship.

This is the counsel of fools, but one suspects that few are willing to tell Xi what he doesn’t want to hear. Thus, the public meme of a silent pro-Beijing majority became self-reinforcing. Until Sunday’s election, the claim might have been believable for those locked away in Zhongnanhai, disconnected from their own people and especially the rest of the world. But no one with a hint of mental activity can any longer imagine that a silent pro-China majority lurks in Hong Kong.

The election was a complete rout. Turnout was massive, double that of 2015. Even areas known for supporting pro-PRC legislators chose democracy activists, with young, first-time candidates ousting long-term incumbents. For the first time pro-democracy parties contested all 452 seats. They more than trebled their number of seats, to 390, and won majorities in 17 of 18 districts. Beijing’s allies, many funded by Chinese businesses, lost more than four of every five seats.

The sole issue was who should control Hong Kong, and voters overwhelmingly declared that they should. Of course, district councils possess only limited power. But Chief Executive Carrie Lam is increasingly isolated and left with no support except from Beijing. The police can break up any particular demonstration or protest, but they cannot restore calm to the city. Public support for the protestors remains strong even amid the chaos and violence.

Beijing’s instinct almost certainly is to send in the riot police, or even troops. But to do so would be an abject admission of failure and prescription for multiple Tiananmen Squares. This time almost an entire city of 7.4 million would be in revolt. The mind boggles at the likely consequences.

Hong Kongers deserve the West’s support, but what does that mean? The PRC will not grant the SAR independence or democracy. It is not just Xi and CPC officials who view Hong Kong as part of China: so does a nationalistic population taught to revile the activists who held Beijing at bay. Nor can the regime maintain tyranny over the many while granting freedom to a few. Demanding that the PC do what it cannot will only encourage a tougher crackdown backed by more vigorous saber-rattling.

Hong Kong currently enjoys an unusually liberal U.S. trade regime, reflecting its relative autonomy. The Hong Kong Human Rights and Democracy Act, recently passed by Congress, would mandate an annual review of the territory’s status. The threat has angered the Chinese, who threatened to “respond tit-for-tat,” whatever that means.

The president hasn’t decided whether he is going to sign the legislation, which almost certainly would be passed over his veto. But he should have no illusions about Xi being his “friend.” However civil their relationship, the Chinese leader is a ruthless totalitarian determined to advance his regime’s interests, at his people’s and America’s expense. Xi might be “an incredible guy,” as the president says, but in this case that is not a compliment. Trump’s decision on the bill should not be based on preserving a fake bromance with Xi.

Although well-intentioned, the measure isn’t likely to improve the Xi government’s behavior. Would Washington sell its sovereignty for a trade concession? Not likely. Nor will Beijing. Moreover, ending Hong Kong’s preferential trade status would hurt Hong Kongers more than Xi & Co., along with the 1300 U.S. companies active in the city. It would make sense to pull that trigger only if the majority of people in Hong Kong were in accord.

A better strategy would be to gather the best of the West — U.S., Europe, and Asian friends — to make a private approach to the PRC. Politicians love to hold press conferences, but Beijing will automatically resist public threats. This ad hoc liberty caucus should warn the Xi government that failing to keep its word about preserving Hong Kong’s unique system and cracking down on the population would have a significant and prolonged negative impact on their dealings with China. Diplomatic, economic, and military relations would be affected. Indeed, it would be impossible to impute anything but hostility to Beijing after such an action. With the PRC facing economic weakness and political fragility, Xi and especially those less than enamored with his rule might prefer to take a compromise path rather than risk a long-term and large-scale confrontation.

Such an exercise also would be useful as preparation for the Taiwan crisis likely to come. Promising to go to war for the island republic raises the challenge issued by a Chinese general years ago: America won’t risk Los Angeles for Taipei. And, frankly, the U.S. should not do so. But what other steps could be taken on Taiwan’s behalf? Friendly states might be willing to join with Washington to threaten a host of other consequences, especially if the tactic previously worked for Hong Kong.

Sunday’s vote constituted a popular uprising, a concerted demand that the PRC respect the lives, liberty, and dignity of Hong Kongers. The majority stood by the protestors despite their increasingly violent tactics. The stakes have gotten much more serious for Beijing; the Xi government has a lot more to lose. Americans should make the price clear as they stand for freedom.