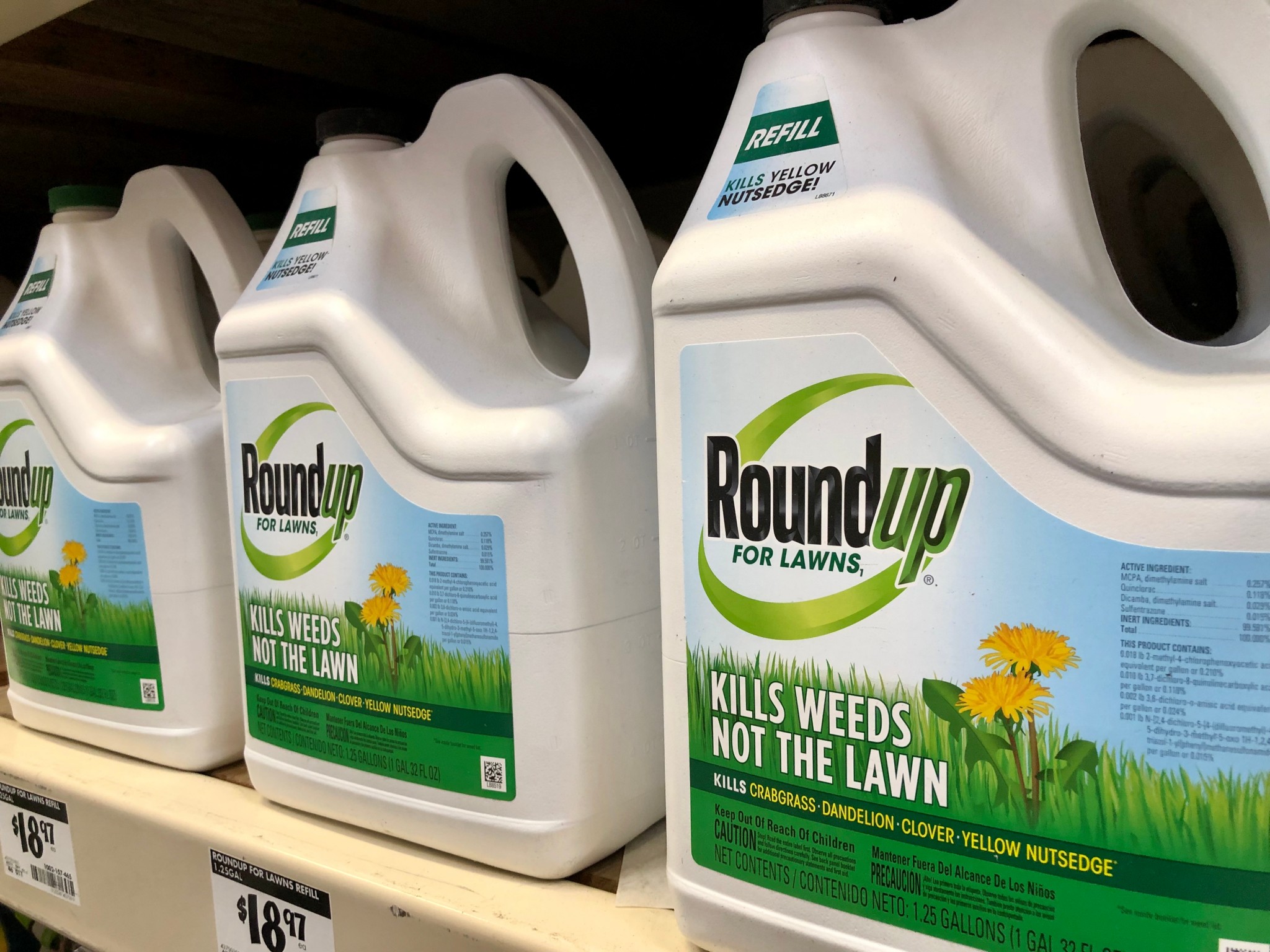 Bayer announced Thursday that it will replace all residential market products using the world’s most successful herbicide with ingredients yet to be named, but inferior. Why would it do such a thing? Oh, about 10.9 billion reasons and all of them bad.

In one of the largest class-action settlements ever, the German multi-national Bayer AG has agreed to pay as much as $10.9 billion to settle close to 100,000 U.S. lawsuits concerning the herbicide glyphosate sold under the Roundup brand. The agreement dwarfs previous out-of-court product liability settlements such as Merck & Co’s $4.85 billion deal to end most litigation over the painkiller Vioxx.

That’s in addition to what’s already been paid out in settlements and verdicts, and doesn’t cover about 25 percent of pending cases. Those allege that the glyphosate that Bayer inherited in its 2018 takeover of Monsanto is causing a common cancer called non-Hodgkin lymphoma or NHL. The “evidence,” such as it is, comprises nothing more than a classification by a single regulatory body — plus tearful testimony from people who contracted the disease.

Essentially, Roundup was removed on the basis of meritless rewards and settlements:

But where there’s smoke, surely there’s some fire, right? No, sometimes there’s just smoke. But there is an interesting story behind the glyphosate-NHL allegations.

Glyphosate is a non-selective weed-killer first approved and used in 1974 under the brand name Roundup, although it’s now found in numerous other herbicides. “Non-selective” means it will kill just about any plant. Thus while it quickly became a farmer and then household user favorite, it had to be applied very carefully on crops lest it kill them too. That’s until Monsanto spliced genes into crops, giving them resistance to glyphosate such that it can now be sprayed right on top of everything and yet kill only the weeds — a terrific time saver. Currently, these plants include almost all the soy and corn grown in the U.S., along with canola, alfalfa, cotton, and sorghum. With that one move, glyphosate sales increased about 15-fold worldwide.

Plagues of insects make for better cinema and biblical accounts. (The army ants that ate both cocoa leaves and humans in The Naked Jungle were awesome, and there’s nothing in Exodus about a plague of unwanted plants.) But it’s weeds that have been the real enemy since agriculture began. A recent analysis of U.S. corn and soybeans found that a failure to control them would cut crop production by half. Worldwide, we would be talking about outright starvation without effective weed control.

The first blow against glyphosate was probably struck before it existed by the influence of nature writer Rachel Carson. She was diagnosed with breast cancer in her early 50s and felt the need to explain it, notwithstanding that, like NHL, breast cancer has always been quite common. Her explanation was synthetic chemicals. In her 1962 blockbuster book Silent Spring, she warned of the dangers to all-natural systems from the misuse of chemical pesticides, especially the insecticide DDT.

The American pendulum took a big swing from “Better Living Through Chemistry” to “Chemicals Are Evil.” By which is meant synthetic ones and not all the natural nasties like the acute poison and human carcinogen lead arsenate that organic farmers used on crops until it was banned fairly recently, the cyanide in fruit pits, and the incredible number of carcinogens in tobacco.

But no chemical maker is hated more than Monsanto. A 2014 article in Modern Farmer titled “Why Does Everyone Hate Monsanto?” explains that it’s because Monsanto was among the earliest makers of synthetic pesticides and was, and remains, the leader in gene-spliced foods, and (gasp!) it’s a multi-national company. And of course, so is Bayer, plus it commercialized heroin. But it did so in hopes of aiding cocaine withdrawal, and also it commercialized aspirin, so maybe it’s a wash.

Thus understandably, glyphosate came into the crosshairs. That said, is there any scientific evidence that Roundup harms anything but plants? According to virtually every regulatory agency that has studied it, the answer is no.

The lawsuit that kicked off the present cascade was that of a groundskeeper exposed to the chemical over many years who won a $289 million verdict in 2018, later reduced to $25 million. Had that been the original award, it might have reduced the shark frenzy, but given that tort lawyers usually take one-third to 40 percent of the reward (in addition to charging costs), the final amount is still substantial.

Crucial to the jury decision, according to a then-Monsanto vice president, was that the International Agency for Research on Cancer (the World Health Organization’s cancer research arm) classified glyphosate in 2015 as “probably carcinogenic to humans.” Held against Monsanto was “failure to warn” about this.

But just maybe that’s because the EPA has “repeatedly reviewed and reassessed the safety of glyphosate” since initial approval, most recently concluding in 2020 that “there are no risks of concern to human health when glyphosate is used according to the label and that it is not a carcinogen.” The EPA added, “These findings on human health risk are consistent with the conclusions of science reviews by many other countries and other federal agencies, including the U.S. Department of Agriculture, the Canadian Pest Management Regulatory Agency, the Australian Pesticide and Veterinary Medicines Authority, the European Food Safety Authority, and the German Federal Institute for Occupational Safety and Health.” Whew!

And just in June, the EU Assessment Group on Glyphosate (AGG) issued an 11,000-page draft report concluding that glyphosate is safe when used as directed and does not cause cancer, plus a U.S. federal appeals court permanently blocked California from imposing its notorious Proposition 65 “known to the state of California to cause cancer” label on Roundup.

In fact, a year after IARC’s conclusion, a joint study from the WHO and the UN Food and Agricultural Organization concluded that glyphosate exposure through diet was unlikely to pose a cancer risk.

IARC is the hold-out. Yet, for litigation purposes, it seems to be all that matters both for awarding pain and suffering damages (the lesser part) and especially punitive damages, which requires showing the defendant knowingly did something wrong. Did Monsanto and Bayer know about the IARC classification? Yes. Ergo goes the reasoning, punitive damages can be awarded and also become part of settlements.

But whence the IARC’s conclusion?

First, it helps to know IARC has four tiers, and glyphosate wasn’t in the top one, “carcinogenic to humans,” but rather the second, “probably.” It also added: “evidence was limited.”

Cancer epidemiologist and author of Getting Risk Right: Understanding the Science of Elusive Health Risks Geoffrey Kabat devoted an entire 4,000-word assessment in Issues in Science and Technology to why the IARC’s assessment was used. One aspect is that, unlike virtually all other agencies, IARC does hazard assessment rather than risk assessment. “This means that IARC considers any scientific evidence of possible carcinogenicity, no matter how difficult to interpret or how irrelevant to actual human exposure,” says Kabat. In so doing, the IARC ignores the most basic rule of toxicology, that “the dose makes the poison.” In fact, IARC doesn’t even have a “non-carcinogenic to humans” group. Of course, if the safest classification is “probably not,” then inherently, it also means “possibly so.” It goes beyond guilty until proven innocent.

Kabat demonstrated a litany of problems specific to the IARC evaluation of glyphosate, showing that it simply ignored a huge glyphosate study from the National Cancer Institute-funded Agricultural Health Study (AHS) of 54,000 pesticide applicators in Iowa and North Carolina because it hadn’t yet been put in print. Well, it has been now and still shows no association.

Also, IARC relied on rodent studies that showed no consistent or robust evidence of increased tumors in exposed animals; however, by selecting “a few positive results in one sex and [using] an inappropriate statistical test” it found some significant tumor increases, Kabat wrote. “Salami slicing” of data is widely considered wrong when simply used to get multiple papers out of one set, but it’s completely unethical when used in this manner.

One notorious environmentalist with academic credentials noted that the EPA “relied mostly on registrant-commissioned, unpublished regulatory studies, 99% of which were negative, while IARC relied mostly on peer-reviewed studies of which 70% were positive.”

Don’t be fooled. It’s long been known that there’s a powerful medical and science public bias towards positive studies, as I discussed in these pages recently. If you find no link between a given agent and adverse harm, it’s much more difficult to publish your results in a top publication or perhaps anywhere. So you have censorship at the publisher level, and also self-censorship at the researcher level. Why bother writing up and submitting a paper that probably won’t get published?

“It is easy to see why journals would be biased against negative studies,” observed The Journal of the Royal Society of Medicine. “Who wants to read that a new treatment does not work?” Or conversely, that a widely-used chemical doesn’t cause rodent cancers? Such bias is a plague on all medical research.

As for peer review, it has become “the last refuge of the scoundrel” to paraphrase Dr. Johnson. An editor of the BMJ (formerly British Medical Journal) once declared it “a flawed process, full of easily identified defects with little evidence that it works.” Not only is there no evidence it helps sort good research from bad, but as the above opinion piece in The Journal of the Royal Society of Medicine noted, “The editorial peer review process has been strongly biased against negative studies.”

So much for IARC’s allegedly superior methodology. The EPA (and all those myriad bodies in agreement) was correct in looking at the totality of the evidence.

None of which, it turns out, matters a wit. Unfortunately, one reason the movies usually have a happy ending is to counter that real life so often it goes the other way.

Michael Fumento (www.fumento.com) is an attorney, journalist, and author of multiple books, including BioEvolution: How Biotechnology Is Changing Our World.