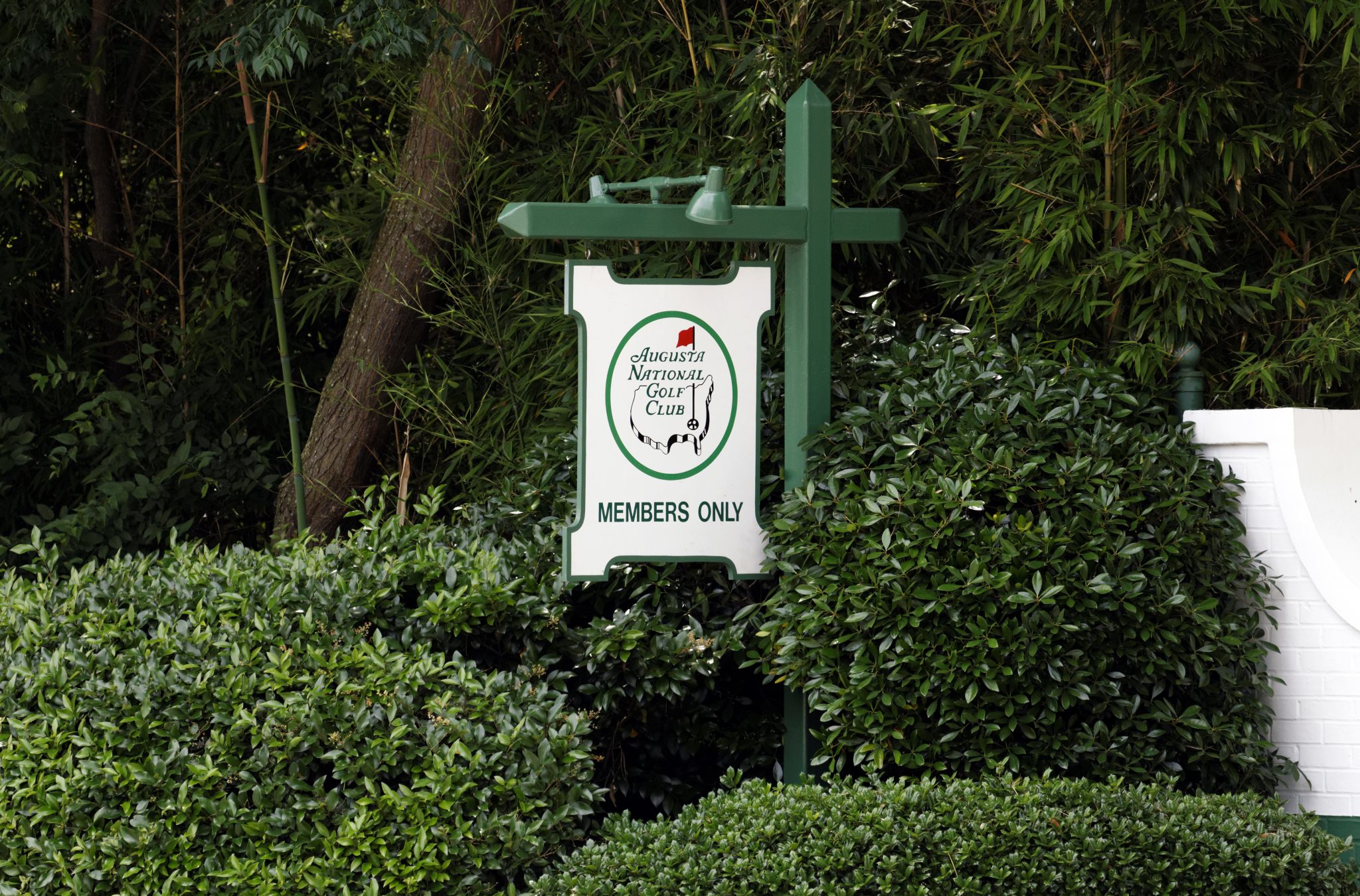 “As outrage over [Georgia’s election] law built this week, not everyone was as willing to go on the record with their [sic] next move.” So wrote New York Times sports columnist Joe Drape on April 2. Chief among those failing to acknowledge the media’s faux outrage was the Augusta National Golf Club, the host of the Masters golf tournament. “Representatives for the Masters golf tournament across the state in Augusta did not return phone calls or email messages,” Drape huffed. If Drape knew his history, he could not have expected them to.

In 2003, the mavens of cancel culture took their best shot at the Masters and shanked it, a story well told in Alan Shipnuck’s book The Battle for Augusta National: Hootie, Martha, and the Masters of the Universe. The effort had begun four years earlier when sportswriter Christine Brennan began badgering William Woodward “Hootie” Johnson, the club member responsible for overseeing the tournament, about the absence of female members.

That she did. The letter ran just nine sentences and concluded threateningly, “We urge you to review your policies and practices in this regard, and open your membership to women now, so that this is not an issue when the tournament is staged next year.” Johnson decided to take the battle to the enemy. To Burk, he sent a short letter. To the news media, he sent a press release so forceful that it negated the news value of anything Burk might say in response.

“We will not be bullied, threatened, or intimidated,” Johnson wrote in the release. “We do not intend to become a trophy in their display case. There may well come a day when women will be invited to join our membership but that timetable will be ours and not at the point of a bayonet.” Would that Major League Baseball had a Hootie Johnson of its own!

Lest Burk think him naïve, Johnson described NCWO’s likely strategy and let her know Augusta National was fully prepared to subvert it. “We expect such a campaign would attempt to depict the members of our club as insensitive bigots and coerce the sponsors of the Masters to disassociate themselves under threat, real or implied, of boycotts and other economic pressures,” said Johnson.

The New York Times jumped into the fray on July 13, 2002, just a few days after Johnson issued the press release. Burk, who had grown used to getting her way, was still in shock. “He went ballistic,” she told the Times. “He has ended any possibility of direct communication. My choice is to communicate with others, and that may include sponsors of the Masters and individual members of the club.” Even Burk was impressed that Johnson anticipated her strategy before she had a chance to formulate it.

Before the 2002 golf season ended, Johnson thwarted Burk’s best line of attack by dropping the contracted television sponsors of the 2003 tournament — IBM, Coca-Cola, and Citigroup — as a way of protecting them from harassment. The sponsors liked the move because it saved them from a no-win decision. Fans liked it because there would be no TV commercials during the Masters, the highest rated of all golf tournaments. In making the gesture, Johnson signaled the club’s willingness — and ability — to pay for its principles.

When Johnson announced the decision to shield his sponsors, Burk went after the broadcaster. “We expect to have a conversation with CBS,” she told the Associated Press. “It will be about whether they want to broadcast an event, held in a venue that discriminates against half the population, and what kind of statement that makes about CBS as a network.” CBS gave that notion no time to fester. A network spokeswoman shot back, “CBS will broadcast the Masters next year.”

Undaunted, Burk predicted the Masters would “fade as a major tournament” if Johnson did not yield on the issue. He was not about to. In fact, he seemed to enjoy taunting Burk with the progressives’ own pro-choice rhetoric. After allowing that the club might very well admit a woman in some distant future, Johnson added slyly, “In the meantime, we will hold dear to our tradition and our constitutional right to choose.”

Burk had one major ally in the fight: the New York Times. Before the battle was through, the Times would run more than 100 articles or columns on the subject. In virtually every one of them, typically within the first sentence or two and often in the headline, the reporter established Burk as the Joan of Arc in this holy war.

Meanwhile, a real war had just begun in Iraq. Burk thought the war would make a good hook to advance her cause. The Times editors agreed. “It’s appalling that the women who are willing to lay down their lives for democratic ideals should be shut out of this club,” said Burk.

One could fault Burk’s sense of proportion, but there was no faulting her energy. Undistracted by the world-shaking events in the Mideast, she was pressuring the Augusta City Council, organizing demonstrations, collaborating with the ACLU, enlisting Jesse Jackson, hectoring members, browbeating sponsors, and demanding that CBS not televise the event.

As the tournament approached, the Times ran articles on the Burk jihad very nearly every day, often two a day. They did no good. An April 14 headline summed up the outcome: “She Did Not Prevail This Year, But Burk Has Time on Her Side.” It should have read, “But Burk Has the Times On Her Side.”

Burk and the Times kept beating the drum, but Hootie chose not to march to it. After two years, the heat had subsided sufficiently that he reopened the tournament to sponsors and had no trouble finding all he needed.

In 2006, when Johnson retired as chairman, Burk expressed her hope that a “change in leadership would bring a change in attitude.” The new chairman, Billy Payne, would seem to have had potential. He had been the CEO of the Atlanta Committee for the 1996 Olympics, a model of “inclusion.” But Payne had no interest in obliging Burk and her crusade. “I’m very much aware of her position on all issues as they relate to Augusta National,” he said on assuming the club chair, “and I don’t see at this time that any dialogue would be meaningful or helpful.”

One woman who had no issue with Augusta’s policies was former Secretary of State Condoleezza Rice. An avid golfer, Rice was asked by Golf Digest in 2011 whether she thought Augusta had an obligation to open its membership to women. “No. I actually don’t,” said Rice. “These are issues for the membership. I’ve got a lot of good friends at Augusta who are really good people. And it’s really up to them.”

A year later, apparently appreciative of her attitude, Augusta National asked Rice to join the club. Although Martha Burk was quick to take credit for Rice’s admission, feminist groups were not lining up to award a Republican, even a black Republican, for her pioneering role in breaking the notorious “grass ceiling.”

In fact, there wasn’t much love forthcoming from progressives anywhere. Two years later, the faculty council at Rutgers University made enough of a stink over Rice’s scheduled appearance as commencement speaker that she felt compelled to back out. That was okay. It was May. The azaleas were in bloom, and the good old boys at Augusta were much more welcoming.