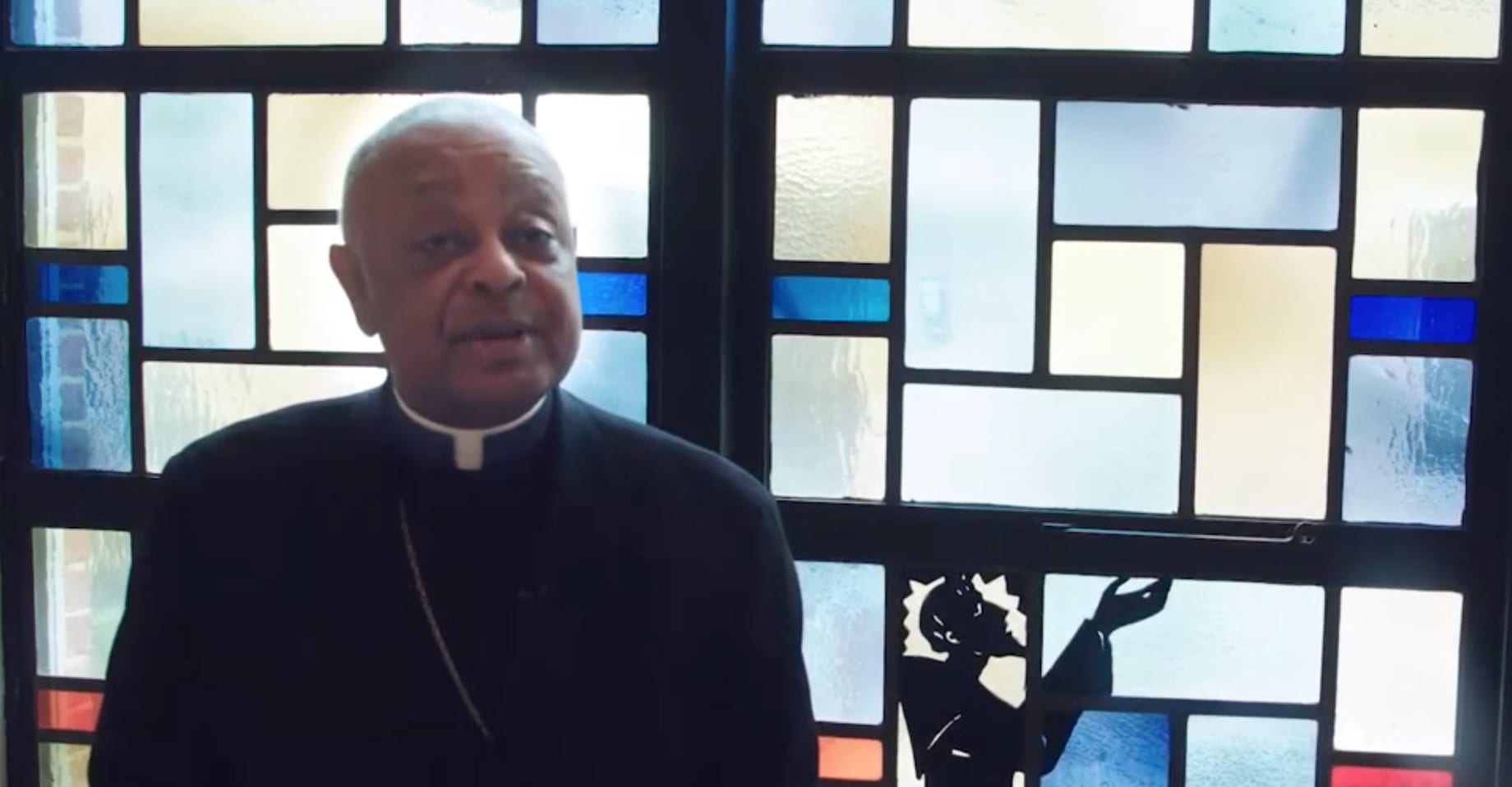 In a remarkably uncharitable display, Washington, D.C.’s Archbishop Wilton Gregory lashed out at President Trump and at the staff of the John Paul II Shrine in Washington, D.C. His unfair words were widely echoed by an appreciative liberal press and by angry liberal Catholics.

The issue was a visit by President Trump on June 2 to the John Paul II Shrine, in what was a fully understandable overture to international religious freedom. But Gregory, evidently, wasn’t even thinking about religious freedom.

Frankly, Gregory’s statement will have the added effect of vindicating fears of many Catholics in the D.C. area who had hoped that Pope Francis would appoint practically anyone but him to replace Cardinal Wuerl.

“I find it baffling and reprehensible that any Catholic facility would allow itself to be so egregiously misused and manipulated in a fashion that violates our religious principles, which call us to defend the rights of all people even those with whom we might disagree,” Gregory said in an awful statement.

What’s reprehensible is that Archbishop Gregory accused shrine staff of allowing themselves to be egregiously misused and manipulated in a way that violates Catholic religious principles. What did the staff do wrong? Did Gregory expect the staff to tell the president to cancel the previously planned visit? To tell the president to take his international religious freedom and shove it?

One wonders if Archbishop Gregory even checked with staff members at the shrine to get their explanation before he accused them of bad faith.

The spokesman for the John Paul II Shrine, Ken Balbuena, explained the position of the shrine, which was commendably apolitical and non-partisan. As noted by USA Today,

The White House originally planned for Trump to sign an executive order on international religious freedom during his visit to the shrine, said Ken Balbuena, the shrine spokesman. Trump instead signed the order when he returned to the White House.

Staging the signing event at the shrine “was fitting, given St. John Paul II was a tireless advocate of religious liberty throughout his pontificate,” Balbuena said. “International religious freedom receives widespread bipartisan support, including unanimous passage of legislation in defense of persecuted Christians and religious minorities around the world. The shrine welcomes all people to come and pray and learn about the legacy of St. John Paul II.”

All of which is true. And why that particular day? President Trump visited the shrine on that specific date, June 2, because it was the anniversary of John Paul II’s June 1979 trip to Poland, which was a historic moment that was all about religious freedom — an epic nine-day trip. It’s difficult to identify a greater single instance advancing religious freedom over the past half century. Every Catholic knows this (or should know it). Moreover, there are numerous remembrances of John Paul II worldwide right now because this is the centenary of his birth. For the president to go there as a statement on international religious freedom is totally fitting. Trump going there makes perfect sense, if one understands the significance of John Paul II’s June 1979 trip to Poland.

In fact, that raises the question: Does Archbishop Gregory understand the significance?

Maybe he doesn’t. It’s quite possible that Archbishop Gregory was just plain ignorant to the intended symbolism.

Trump, a non-Catholic, understands the significance, as does First Lady Melania Trump, who also visited the shrine, and who is Catholic and Eastern European and grew up under atheistic communism. For a briefer, Archbishop Gregory should take a close read of this passage from President Trump’s July 2017 speech in Poland:

Through four decades of communist rule, Poland and the other captive nations of Europe endured a brutal campaign to demolish freedom.… And when the day came on June 2nd, 1979, and one million Poles gathered around Victory Square for their very first Mass with their Polish Pope, that day, every communist in Warsaw must have known that their oppressive system would soon come crashing down. They must have known it at the exact moment during Pope John Paul II’s sermon when a million Polish men, women, and children suddenly raised their voices in a single prayer. A million Polish people did not ask for wealth. They did not ask for privilege. Instead, one million Poles sang three simple words: “We Want God.”

In those words, the Polish people recalled the promise of a better future. They found new courage to face down their oppressors…. We can still hear those voices that echo through history. Their message is as true today as ever. The people of Poland, the people of America, and the people of Europe still cry out “We want God.”

Take note, Archbishop Gregory, the date called out by President Trump in that speech: June 2, 1979.

And thus, Archbishop Gregory’s statement was shockingly ignorant and unjust; it was way over the top. I repeat: Did Gregory not know this history? Who’s advising him? Did his staff not protect him? Did certain staff members disserve the archbishop? Was Gregory misled, egregiously misused, and manipulated? Or was this his doing solely and entirely?

Frankly, Gregory’s statement will have the added effect of vindicating fears of many Catholics in the D.C. area who had hoped that Pope Francis would appoint practically anyone but him to replace Cardinal Wuerl. Personally, I’ve hoped that Gregory would be a measured voice of reason and would stay out of politics. But this is a troubling sign to the contrary.

And Gregory wasn’t alone. Other Religious Left voices lashed out at the president.

The bishop of Kentucky, John E. Stowe, issued a nasty statement, hoping that during the Trump visit “someone proclaims today’s Gospel (Mark 12:13-17) where Herodians and Pharisees are called out for their hypocrisy.”

What hypocrisy, Bishop Stowe? Trump went to the John Paul II Shrine as an act of solidarity with international religious freedom. That was the point.

And yet, Stowe and Gregory were restrained compared to others.

Patricia McGuire, the president of Trinity Washington University, which is a stone’s throw from the shrine, reportedly charged President Trump with ripping down the hallowed wall between church and state and weaponizing religion: “He’s torn down the wall between church and state,” McGuire fumed, “and instead (is) weaponizing religion for his own political goals.” She sought to rally the bishops to censure the reprobate in the White House, saying they needed to stand “shoulder to shoulder at this shrine and tell him in no uncertain terms that this promotion of religion for political purposes is wrong.”

And the left-wing nun Sister Simone Campbell amazingly accused Trump of having “no clue about the teaching of Pope John Paul II or of our Catholic faith.”

Really? Again, the man was visiting the shrine on June 2 because of John Paul II’s historic visit. The cluelessness here is not on Trump’s part.

“This is crass politics at its worst,” snarled Campbell. “It’s ignoring the reality of our nation. This is not about religious liberty. This is about human life, human dignity and police violence.”

Campbell owes Trump an apology, as do the others, especially Archbishop Gregory, whose flock is the Washington, D.C., area. If these Catholic voices truly care about charity, then they’ll correct themselves and offer an apology.

Paul Kengor
Follow Their Stories:
View More
Paul Kengor is Editor of The American Spectator. Dr. Kengor is also a professor of political science at Grove City College, a senior academic fellow at the Center for Vision & Values, and the author of over a dozen books, including A Pope and a President: John Paul II, Ronald Reagan, and the Extraordinary Untold Story of the 20th Century, The Politically Incorrect Guide to Communism, and Dupes: How America’s Adversaries Have Manipulated Progressives for a Century.
Most Popular
1
The Right Prescription
Judge Rewrites Georgia Law to Favor Warnock
by David Catron