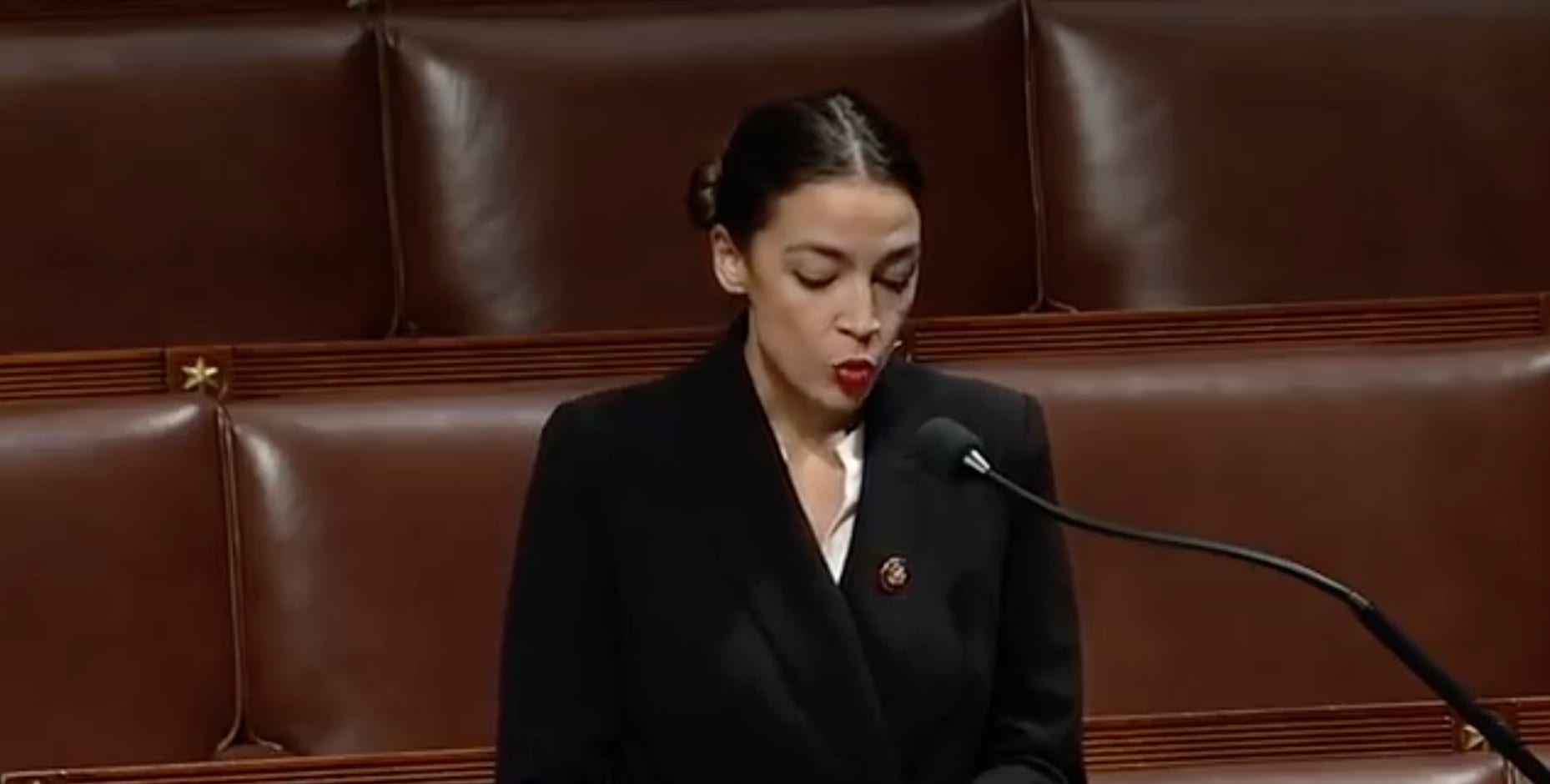 Alexandria Ocasio-Cortez has made fighting the supposedly damaging effects of anthropogenic climate change — Global Warming — her cause célèbre. Under the guise of “environmental justice,” Cortez’s Green New Deal called for a sweeping program of infrastructure reform to make the United States more environmentally friendly; the Green New Deal advocated for the abandonment of fossil fuels in favor of “renewable” sources of energy, such as solar and wind energy. Also, the Green New Deal denied funding for carbon capture technology. Yet, even by environmentalist standards, the impracticality of the Green New Deal borders on the farcical — and that’s according to the co-founder of Greenpeace!

Fact is, the Green New Deal as championed by AOC is less about bettering human existence and more about punishing America for its evil ways (at least as the Left perceives the United States). Let’s start off by addressing what anthropogenic climate change is, since there is a continuing debate over definitions. Essentially, Climate Change proponents worry that the increased output of greenhouse gases — carbon dioxide, methane, nitrous oxide, and ozone — by our industrialized civilization over the last 269 years has caused a net warming of the planet.

As this has occurred, according to the Leftist narrative, polar ice caps have melted at faster-than-usual rates, threatening humanity with higher-than-normal sea levels. Hurricanes and other routine weather have become catastrophic. Essentially, the Left believes that humanity’s modern technology has destabilized the environment. Unless drastic action is taken soon, the planet will effectively become uninhabitable.

But, if human pollution, like that of CO2 emissions, is causing harm to the planet, would not the development of carbon capture technology be an important step toward mitigating the pollution?

According to AOC, the technology is “not feasible.” Don’t tell that to a research team at RMIT University in Melbourne, Australia, though! Back in February of this year this group developed a new technique for carbon capture using a liquid metal electrolysis method, “effectively converting CO2 from a gas into solid particles of carbon.” Writing in the scientific journal, Nature Communications, the researchers claim their carbon capture method “offers an alternative pathway for safely and permanently removing CO2 from the atmosphere.”

The concept behind carbon capture is that excess carbon produced from human industry can be physically captured in its gaseous state and then converted into a containable material. Until recently, carbon capture has been a dream of many environmentalists. But the previous way of doing carbon capture was not economical and environmentally dangerous. The new concept is both cost effective and relatively safe for the environment. Rather than turn carbon into liquid (which took excessive heat to accomplish) to be stored in environmentally unsafe containers underground, the new method will convert carbon into a physical, coal-like state which can be stored in a safer and cheaper way.

Up until a decade ago, most environmentalists would have cheered the advent of this technology as a great success. This technology would allow human technological development to continue unabated and would have likely helped usher in a new wave of scientific research and discovery that would have benefited the world. The Left would have championed the new technology as a symbol of true progress. Today, however, the “democratic socialist” fanatics who compose the Left insist that this technology is impractical, even as proof exists countering their preferred ideological narrative. Their solution is instead to deny humanity the benefits of modern technology and force everyone to live in a pre-industrial state of “balance” with nature.

Next up is the Green New Deal’s assault on fossil fuels. Whatever one may think about the damage fossil fuels (or excuse me, “nonrenewable energy sources,” in the parlance of the Left) may have caused the environment, even the former head of Greenpeace acknowledges that fossil fuels likely saved humanity from a brutal and primitive existence. Despite humanity’s best efforts to find a better, cleaner, alternative energy source, fossil fuels remain the most reliable energy source available to Man.

Of course, just as with Carbon Capture, there is a technological alternative that is environmentally friendly, and simply needs greater investment: nuclear energy.

The data from countries that have embraced nuclear power, such as France, compared to countries that have embraced the Greens’ preferred alternative energy sources — wind and solar — indicate that the renewable sources are a non-starter. Fact is, neither wind nor solar power, regardless of taxpayer investment, will ever be able to meet America’s energy needs or be completely environmentally safe. Nuclear energy, however, does help the environment and allow for Mankind to continue meeting its energy needs.

Germany, for instance, has been championed by Greens around the world as the example par excellence for having become almost totally dependent on wind and solar energy. Yet, Germany’s renewable-produced electricity is 12 times more carbon-heavy than France’s, which relies on nuclear power. That’s just with existing nuclear fission technology!

According to a 2018 analysis by Environmental Progress, a Left-leaning think tank, had Germany spent $580 billion on nuclear power instead of “renewables” (wind and solar farms), Germany would now be generating 100 percent of its technology from clean energy sources. Michael Shellenberger believes that had Germany fully invested in nuclear as opposed to renewable energy sources last year, it would have “entirely decarbonized [Germany’s] transportation sector.”

Leftists everywhere shudder when people like me suggest nuclear energy as a viable, sustainable, and clean alternative to fossil fuels. Whether speaking about nuclear fission (which is how nuclear reactors today create energy) or the more theoretical nuclear fusion as alternative energy sources, leftists insist that this technology is too dangerous to be relied upon. They fear a catastrophic nuclear meltdown. But several countries today have embraced the miracle of nuclear fission power and the incidence of radiation leak or meltdown is infinitesimal. What’s more, the economic benefits to a country embracing nuclear energy are great.

Nuclear Fusion Will Save Us

With nuclear fusion research, the prospects for a more prosperous and “greener” energy future increase immeasurably. Also, nuclear fusion — the combining together of two or more different atomic nuclei and subatomic particles, which allows for the release or absorption of energy — could be the greatest invention in the history of Mankind. For 40 years, the United States has talked about developing this technology, yet little investment has been made. Despite the woeful underfunding of nuclear fusion R&D, though, according to Michael Laberge of General Fusion, progress in nuclear fusion capabilities has kept pace with Moore’s Law in computing science. Thus, the technology is not only feasible, but, if properly funded, could be a cure-all for humanity’s environmental woes.

For its part, the private sector has already sensed the opportunity that nuclear fusion development offers: over the last few years, startups working on nuclear fusion went from just a handful in number to about 20. The nuclear fusion research firm, TAE Technologies, for instance, has raised nearly $800 million. Meanwhile, since 2006, the Chinese Academy of Sciences has been quietly building and testing its Experimental Advanced Superconducting Tokamak (EAST) reactor in Hefei, which is known as the “artificial sun,” because the temperature it can reach is 100 million degrees Celsius. If China’s scientists can achieve their benchmarks for this artificial sun, then EAST will make China a nuclear fusion superpower. On the other hand, AOC’s plan would make the United States a pauper state, hoping for enough sunlight and wind to power America, while offering unaffordable energy costs for most Americans (and rolling blackouts to boot).

Thanks, But No Thanks!

The Green New Deal is an unserious effort predicated upon the absurd notion of “environmental justice.” You see, for today’s Greens, unlike the idealistic environmentalists of yesteryear, punishing the United States to make up for its purported past sins is the goal. Greens, such as AOC, care little for actual progress. They merely want to hurt Americans (while enriching themselves). Embracing the Green New Deal will cost taxpayers as much as $7 trillion over a decade and make life harder on average Americans.

For a fraction of that cost, the United States could build nuclear fission power plants, invest in carbon capture technology to clean our air, while at the same time develop nuclear fusion technology that will provide abundant, advanced, and clean energy for all — and still allow for humans to live comfortably. But, that’s not the goal of the Green New Deal.