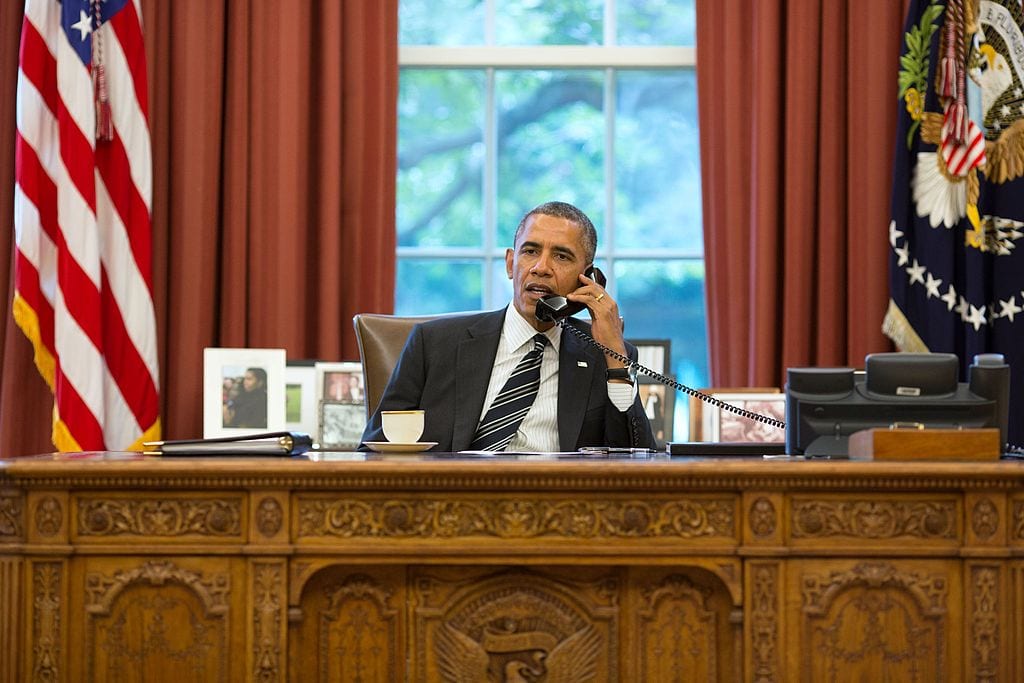 The periodic revelations of scandalous behavior, usually to the detriment of our national security, provide needed remedial courses in the legacy of Barack Obama. The Senate Permanent Subcommittee on Investigations’ report last week, showing how Team Obama lied to Congress about money going to Iran for the 2015 nuclear weapons deal, is more instructive than most.

Under U.S. and international sanctions, Iran hadn’t been able to access the U.S. banking system for more than thirty years. Billions of dollars were frozen, in U.S. and foreign accounts, which the Iranians were desperate to obtain.

In his 2008 campaign, Obama promised open-ended negotiations with Iran without preconditions. The negotiations began a few months after he was inaugurated in 2009 and culminated in the signing of the nuclear weapons deal in 2015.

In July 2015, several top Obama administration officials, including then- treasury secretary Jack Lew, testified that Iran would continue to be denied access to the U.S. commercial banking system. Later that same month Adam Szubin, acting Treasury undersecretary for Terrorism and Financial Intelligence said, “Iranian banks will not be able to clear U.S. dollars through New York, hold correspondent account relationships with U.S. financial institutions, or enter into financing arrangements with U.S. banks.” And, of course, that was true despite the best efforts of the Obama team to enable Iran to do so.

Some $5.7 billion in Iranian rials was held in an Omani bank. The money was worthless unless it could be converted into U.S. dollars for exchange purposes. On February 16, 2016, the Treasury Department’s Office of Foreign Assets Control (OFAC) issued a specific license to the Omani bank to convert the money it held into U.S. dollars through the U.S. commercial banking system.

When the Omani bank license was issued, OFAC officials contacted two large U.S. banks asking them to convert the money. They refused for several good reasons not the least of which was that for them to do so would have violated the U.S. sanctions which were still in effect. When that ploy failed, according to the House report, the Obama administration considered using the Federal Reserve System to wash the money for Iran. That scheme wasn’t effectuated.

At the time these schemes were being carried out, the Obama administration sent Iran secretly about $1.7 billion in cash, apparently in a bribe for the release of hostages. Initially, $400 million in cash — euros, Swiss francs, and other foreign currency — was delivered on January 17, 2016, the same day Iran agreed to release American hostages. The remaining $1.3 billion was paid as the interest accrued on Iranian funds held in the U.S. since Iran’s kakistocracy came to power.

The OFAC license, the pressure on U.S. banks, and the cash payments were all done in the name of Obama’s nuclear weapons deal which was supposed to deny Iran all paths to a nuclear weapon for at least a decade. It did no such thing.

Months ago, before President Trump revoked the deal, Iran said it could recommence uranium enrichment within days of an order from its Supreme Leader, Ayatollah Khamenei. The Obama deal was supposed to make such a rapid restart impossible, but Iran did as it said it would, recommencing enrichment last week.

When the president canceled the Obama nuke deal last month, he made himself very unpopular with our European allies who are, as always, counting pennies instead of thinking in terms of their own nations’ security.

Last week, Boeing announced that it wouldn’t sell Iran the airliners it had planned to do so because it didn’t want to violate the sanctions Trump was re-imposing on Iran. The European governments, speaking for the financial interests of their companies, want Trump to exempt them from the sanctions so they can buy Iranian oil and sell Iran everything it wants from airliners to computers to clothes.

Iran’s economy remains a shamble. European trade could help it recover substantially. Trump won’t grant the exemptions the EUnuchs seek, nor should he. An admission by an Iranian official made last week makes that more clear than ever.

Last week Mohammad-Javad Larijani, an international affairs assistant in Iran’s judiciary, said on Iranian television that the ayatollahs’ government had directly assisted the 9/11 al-Qaida hijackers, giving them temporary sanctuary and then aiding their passage to the United States.

Larijani said, “Our government agreed not to stamp the passports of some of them because they were on transit flights for two hours, and they were resuming their flights without having their passports stamped. However, their movements were under the complete supervision of the Iranian intelligence.”

Larijani would not, could not, have said what he did without permission from Iran’s Khamenei. Khamenei, we should remember, equated (on March 14, 2005) the Iranian chant of “death to America” to a religious obligation of his people.

On September 18, 2001, Congress passed Public Law 107-40, the Authorization for the Use of Military Force against those people, nations, and terrorist networks that helped commit the 9/11 terrorist attacks on New York City and the Pentagon that killed three thousand Americans.

Larijani’s official statement by the government of Iran is not just a confession of Iran’s participation in the 9/11 attacks, it is a boast of it. The media and the EUnuchs have ignored it. We dare not ignore or forget it.

For almost four decades, Iran has been the principal terrorist-sponsoring nation in the world. Since at least 1981 it has been lying about its plans to develop nuclear weapons. Obama’s 2015 nuclear weapons deal with Iran was bigger than all the other lies he told.

Under the 2001 AUMF, the president would be entirely justified in ordering military action against Iran. But he won’t. This week he is busy trying to craft a deal to get North Korea to surrender its nuclear weapons.

The president will meet Kim Jong Un tomorrow in Singapore in pursuit of such a deal. His desire for an agreement will be tempered by National Security Adviser John Bolton and Secretary of State Mike Pompeo, both of whom will sit in on the negotiations.

Any deal would have to require full disclosure of North Korea’s nuclear weapons and ICBM development, both of which are substantially aided by China and participated in by Iran. Neither China nor Iran will permit that.

No deal with Kim can benefit our national security other than the complete nuclear and ICBM disarmament of North Korea.

As I wrote last week, Trump should expect that Kim will try to get him to agree to withdraw our anti-missile defenses in South Korea, including the Theater High Altitude Missile (THAAD), because Chinese President Xi Jinping regards THAAD as a danger to his nation. In 1986, during the Reykjavik summit between President Reagan and Soviet Premier Gorbachev, after they apparently had a deal, Gorbachev then insisted that our anti-missile programs be confined to laboratory research. Reagan walked out.

Trump has said that he would walk out of the talks with Kim if no deal can be reached and boasted that he’d know whether the summit can succeed in the first minutes of the meeting.  If that’s true, tomorrow’s meeting should be very short. It may be that Trump wants to walk out. It would be a very good move if he did.